Only the US (39 airports) and China (20 airports) have more airports than Brazil in the domestic top 100 ranking. This is fitting as Brazil is now the world’s fourth largest domestic market after the US, China and India.

Combined, Sao Paulo’s two main airports – Guarulhos and Congonhas – currently have just under one million domestic seats per week. This puts Sao Paulo ahead of two other fast-growing emerging markets that only have a single airport – Jakarta and Guangzhou.

Slot-controlled Congonhas is located near the city centre and is limited to narrowbody domestic flights. Guarulhos is the main international gateway to Brazil, but has also emerged as Brazil’s largest domestic airport partially due to the constraints at Congonhas. Viracopos is further afield, located in the Sao Paulo suburb of Campinas, and is a fast-growing alternative airport used mainly by low-cost domestic passenger carriers and cargo operators.

There is remarkably little change in the rankings between now and the upcoming Southern Hemisphere summer schedule.

Both routes are primarily served by three carriers – Gol, TAM and Avianca Brazil. The three other main carriers in Brazil – Azul, TRIP and Webjet – have very few or no slots at Congonhas. Azul and TRIP are based at Viracopos while Webjet is based in Rio de Janeiro.

Webjet has a relatively large portfolio of domestic slots at Guarulhos and Santos Dumont, where in both cases it is the third largest carrier after Gol and TAM. Gol cited the attractiveness of these slots in deciding earlier this year to acquire Webjet. The acquisition, which is expected to close in mid-2012, will give Gol about a 43% share of the total domestic market (based on RPKs) – equalling TAM’s current share. See related article: Webjet acquisition improves Gol’s position in world’s fourth largest domestic market.

Based on seats, Gol is poised to overtake TAM as Brazil's largest domestic carrier once the acquisition of Webjet closes. 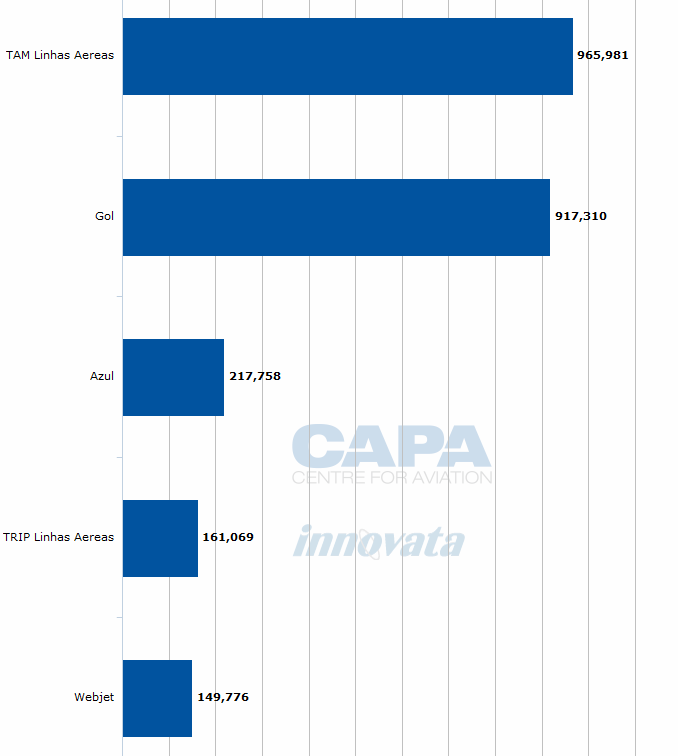 While Guarulhos is the largest international airport in Latin America, 65% of its seats are currently allocated to the domestic market, according to Innovata data. Brazil, which is the fifth most populated country in the world, is an even more domestic-dominated market than China or India. China currently has three airports in the international top 100 compared to two for India and only one for Brazil. The US has nine airports among the world’s 100 largest airports by international capacity (seats).

In terms of international capacity, Guarulhos accounts for over 60% of all seats to and from Brazil. While Sao Paulo is one of the five largest cities in the world and is South America's biggest financial centre, Guarulhos also serves as the primary hub in Brazil for international-to-domestic connections.

Rio de Janeiro Galeão is the second largest international airport but in terms of international capacity is less than one-third the size of Guarulhos. Brazil's other airports have rather limited international traffic.

A big mover in the rankings over the next few months will be the Rio-Buenos Aires Ministro Pistarini Airport (EZE) route, which is seeing a 40% increase in capacity, according to CAPA's Routes Rankings Tool. This increase is driven by the Jan-2011 launch of service by Emirates on the Dubai-Rio de Janeiro-Buenos Aires route. The new daily Emirates flight will add 2597 seats per week in each direction between Rio de Janeiro and Buenos Aires.

The only other big movers are the Sao Paulo-Miami and Rio-Miami routes. In both cases, the changes are driven by capacity increases by American Airlines for the peak Southern Hemisphere summer season.