Gol announced on 08-Jul-2011 that its Varig subsidiary has signed an MOU with Webjet’s shareholders to acquire 100% of Webjet. In addition to giving Webjet shareholders BRL96 million in cash, Gol has agreed to assume from Webjet BRL215 million in debt.

Acquisition expected to close in 2012

Gol says completion of the deal is subject to several conditions, including due diligence and approval from Brazil’s civil aviation authority ANAC and anit-trust regulator CADE. Gol CEO Constantino de Oliveira Junior told analysts he is confident Gol and Webjet will be able to close the deal sometime in 2012 – most likely around the middle of the year.

Mr Oliveira is confident regulators will agree with Gol that the acquisition will result in “a better package for the consumers” but said it is impossible to predict exactly how long it will take to secure approval from CADE. “One year is probably something reasonable,” Mr Oliveira said.

Rio de Janeiro-based Webjet is currently the fourth largest domestic carrier in the Brazilian market with a 5.4% share, based on RPK data from Brazil’s ANAC for the first five months 2011. The Sao Paulo-based Gol group (includes Varig, which Gol acquired in 2007) currently has a 37.5% share of Brazil’s domestic market.

Brazilian domestic market share by carrier, Jan-2011 through May-2011

TAM now has a leading 42.9% share of the market (again based on RPKs for the first five months of 2011). This includes TAM mainline as well as its regional subsidiary Pantanal, which TAM acquired at the end of 2009. Pantanal was a small turboprop operator within Sao Paulo state but TAM has since expanded the Pantanal operation to include A320s and domestic trunk routes.

TAM also signed in Mar-2011 a letter of intent to purchase a 31% stake in TRIP, Brazil’s largest regional carrier with a 2.7% share of the market. TRIP, which is the fifth largest player in the Brazilian domestic market and has been growing at a rapid clip, already codeshares with TAM.

While Gol’s acquisition of Webjet will give both Gol and TAM roughly equal 43% shares in the Brazilian domestic market, TAM will still be larger when factoring in its partnership with TRIP. Gol also has a partnership with a Brazilian regional carrier, NOAR, which was forged in Sept-2010. But this partnership does not include an equity stake and NOAR is tiny, flying only 174,000 RPKs in May-2011 (in comparison Gol flew 2.2 billion domestic RPKs in May-2011).

It is unlikely Gol will acquire a regional carrier as such a move would not significantly increase Gol’s market share and would go against typical low-cost carrier strategy. Passaredo is the now the second largest independent regional carrier in Brazil after TRIP. Passaredo now only has a 0.8% share of the market although it has been growing rapidly, with ASKs up by 80% for the first five months of 2011 compared to the same period of 2010.

Gol has been focusing mainly on the domestic market since dropping Varig-operated long-haul scheduled services in 2008. Gol also recently dropped Bogota, leaving it with scheduled international services to only five destinations in South America (it also has four low-frequency destinations in the Caribbean which are primarily served via Caracas). Gol recently stopped operating its remaining B767s, which were initially used for Varig scheduled flights to Europe and in late 2009 were reactivated for international charters.

Webjet leases 18 of its 24 aircraft, according to Ascend data. Mr Pereira told analysts some of Webjet’s leases expire in 2012, most expire in 2013 and a few expire in 2014. In recent years Gol has had a tough time negotiating early returns for its B737-300s and B767s. But Gol is confident it will not have problems returning Webjet's fleet as most of the lease terms are short and Webjet's lessors also supply aircraft to Gol.

TAM, which currently accounts for 48% of mainline capacity at Santos Dumont (excludes TRIP's regional operation), will remain the largest carrier at Santos Dumont after the acquisition. But adding Webjet’s 14% share to Gol’s 18% share puts Gol in a much better position at Rio de Janeiro’s popular downtown airport. 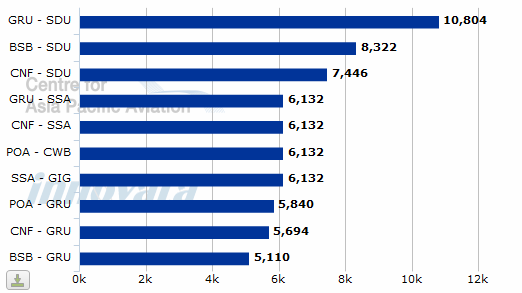 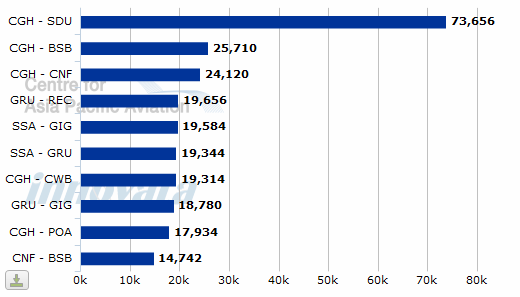 Webjet is also now the third largest carrier at Sao Paulo Guarulhos and Rio de Janeiro Galeo but after the acquisition TAM will remain by far the largest carrier at Brazil’s two primary international gateways. According to Webjet’s website, the carrier now operates eight routes from Rio de Janeiro Galeao and seven from Sao Paulo Guarulhos. Webjet does not operate any international routes. 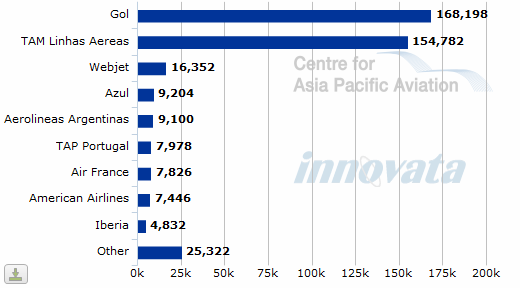 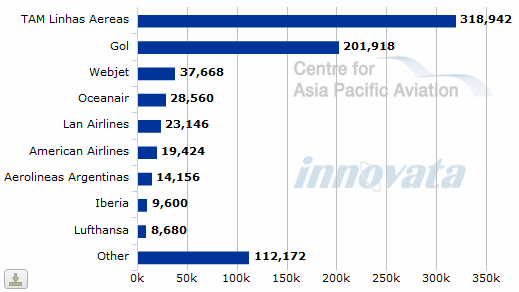 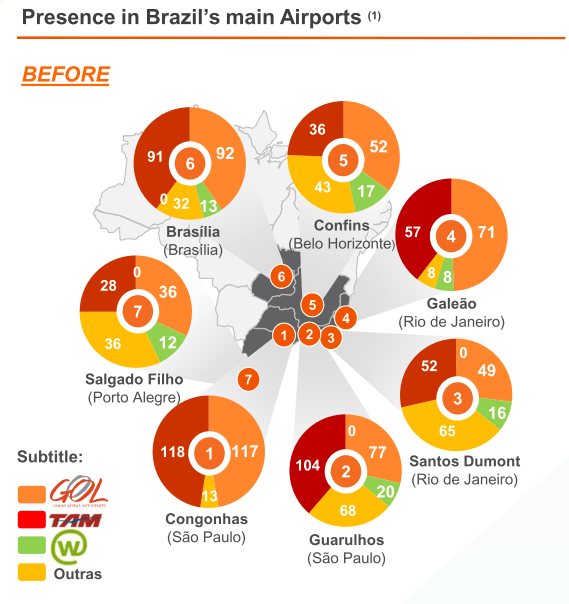 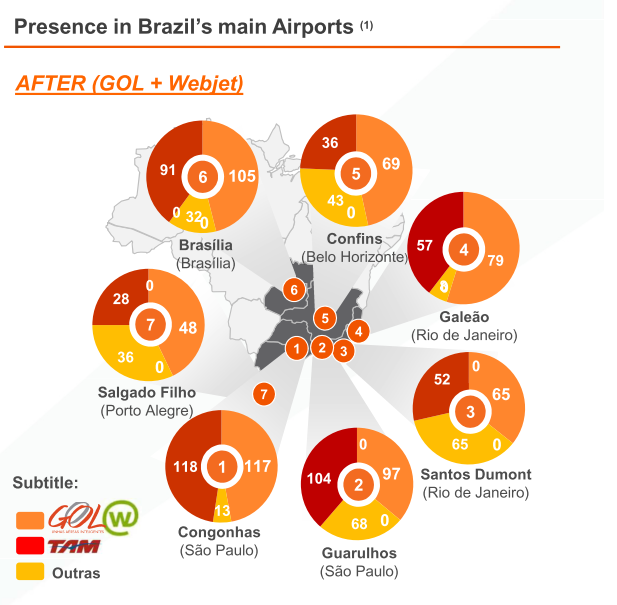 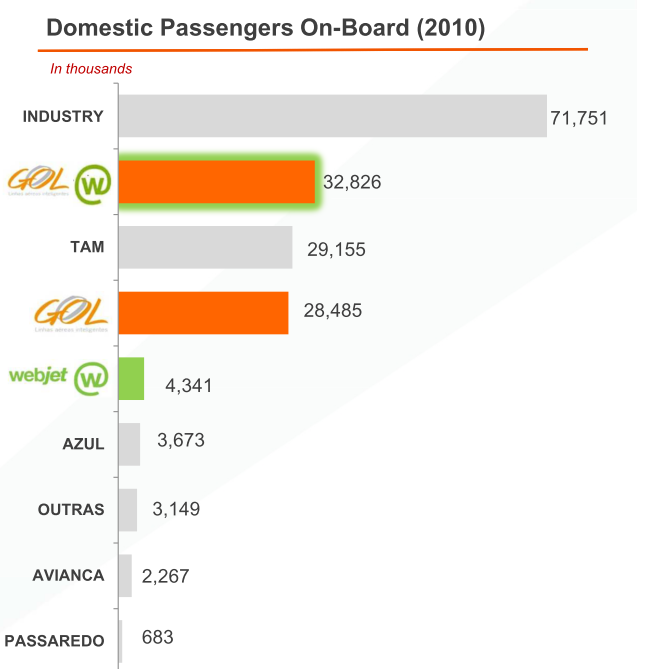 Source: Gol, based on ANAC data

In terms of revenues, TAM will also remain a much larger carrier. TAM is already more than 70% bigger than Gol in terms of revenues and is poised to become even larger once it completes its proposed merger with LAN. TAM and LAN combined had revenues of about USD3.3 billion in 1Q2011 while Gol’s revenues for the quarter came in at about USD1.1 billion. Webjet only generates revenues of roughly USD120 million per quarter.

Gol is now Latin America’s third largest airline group after TAM and LAN. Its purchase of Webjet should help it cement this position and ensure that it remains larger than Avianca-TACA, which generated about USD900 million in revenues in 1Q2011. Avianca Brazil, previously known as Oceanair, is currently not yet part of Avianca-TACA. It is expected Avianca Brazil will formally join the group later this year but the impact will be minimal as Avianca Brazil is currently Brazil’s sixth largest domestic carrier with only a 2.6% share of the market.

Gol does not have any airline subsidiaries outside Brazil but Brazil is such a big market it alone is enough to support a large airline group. The Brazilian domestic market is now the fourth largest domestic market in the world after the US, China and Japan. More importantly, it is also one of the world’s fastest growing markets.

Brazilian domestic market has grown by 22% so far this year

Through the first five months of 2011, domestic RPKs were up 22% in Brazil. Gol’s growth of 11% lagged most of its competitors, including the 24% growth posted by TAM, making Gol's move to acquire Webjet particularly important.

Webjet also has been growing slowly by Brazilian standards this year, with RPKs up only 6% through the first five months of 2011. But Webjet’s conservative capacity expansion paid off with a relatively high load factor of 76.2%, beating the industry average load factor of 71.6%.

Azul has had the highest growth so far this year, recording an 83% increase in RPKs through the first five months of 2011, followed by 62% for TRIP and 33% for Avianca Brazil. Of all the remaining independent carriers, the Gol-Webjet deal could benefit Azul the most as it will be left as the only Brazilian low-cost carrier outside of the Gol group.

Azul, which currently serves 38 domestic destinations with 37 aircraft, is already planning rapid expansion with almost 130 aircraft envisioned by the end of 2014. The Webjet-Gol deal could prompt Azul to consider accelerating expansion as opportunities are created from consolidation in certain city pairs.

Before Gol came along, Webjet’s current shareholders, led by Guilerme Paulus, were looking at an IPO. Gol now plans to acquire all of Webjet from Webjet’s parent company, which is controlled by the Paulus family. The same parent company also owns Brazilian travel company CVC but Gol is not buying any stake in CVC. Mr Oliveira, however, expects Gol’s existing relationship with CVC could be strengthened as a result of the Webjet acquisition.

Webjet filed in Feb-2011 for a potential IPO on the Sao Paulo Stock Exchange and was also reportedly in discussions over selling a stake to Ryanair. However the fact Webjet has been overtaken in the domestic market by newer Azul and Webjet's prior lack of profitability could have made the IPO difficult to complete.

Gol, which is traded on the New York Stock Exchange, says Webjet’s “enterprise value” is BRL310.7 million. Gol says the acquisition price of BRL96 million cash plus the assumption of BRL215 million in debt is still “subject to certain adjustments prior to the closing date”.

Webjet has an even lower cost structure than Gol (unit costs at Webjet in 2010 were 3% lower than unit costs at Gol). Ancillaries also account for a higher portion of total revenues at Webjet, a position Gol could learn from as it aims to increase its own ancillary revenue stream.

Mr Oliveira says Gol’s “target is to integrate both companies” and eventually “fly with just one brand – the Gol brand”. But he says CADE will need to approve the full integration of the two airlines and could potentially insist on maintaining two separate operations.

Mr Oliveira is confident of CADE approval because the acquisition involves “two companies operating under the same concept”. He says Gol expects “to maintain very competitive fares and stimulate the market” after the deal is completed. He believes the deal will also result in more frequencies in certain markets and a more reliable service for the consumer.

ANAC approval should be even easier to secure. Mr Oliveira says ANAC has three measures when reviewing airline acquisitions - operational capability, financial capability and technical capability of the buyer. “I don’t think we’ll have a problem related to these three points,” he said.