Two of the world’s largest engine manufacturers are engaged in a legal dispute over commercial aircraft engine designs. Rolls-Royce has filed a complaint against United Technologies Corporation (UTC), the parent of Pratt & Whitney and a participant in numerous engine JVs, alleging infringement of Rolls-Royce’s patents.

Two of the world’s largest engine manufacturers are going to court over commercial aircraft engine designs. Rolls-Royce has filed a complaint against United Technologies Corporation (UTC), the parent of Pratt & Whitney and a participant in numerous engine JVs, alleging infringement of Rolls-Royce’s patents.

The complaint resolves around the design of swept fan stages on the Engine Alliance GP7200 and the Pratt & Whitney PW1000G, as well as other UTC aero civil engines. Rolls-Royce is seeking “damages and injunctions”. Pratt & Whitney has denied that it violated the Rolls-Royce patent and stated it plans to "vigorously defend itself."

Rolls-Royce claims that the origins of the case dates back to the late 1990, with UTC’s unsuccessful application to the US Patent Office to have the Rolls-Royce swept fan blade patent struck out. The case is due to go before a jury in the US District Court for the Eastern District of Virginia in 1H0211.

The Engine Alliance GP7200 is produced through a 50:50 JV between Pratt & Whitney and General Electric. The engine is offered for the A380, directly competing with Rolls-Royce’s Trent 900. Of the known A380 engine configurations, the GP7200 has outsold the Trent 900 by around 40%.

The second engine in the case, the PW1000G (formerly known as the Geared TurboFan), is the basis for Pratt & Whitney’s new ‘PurePower’ engine family. A product of two decades and an estimated USD1 billion of investment, the family of 14,000-23,000 lbs thrust engines is designed for the next generation of regional jets and narrowbodies. Criticisms of the engine have coalesced around the perceived complexity and maintenance intensity and the fact that the smaller engine does not match the outputs of the current CFM56-5/7 and IAE V2500 engines fitted to existing Airbus/Boeing narrowbodies.

Despite the criticisms, the PW100G family has already been a success for Pratt & Whitney, being selected for the Bombardier CSeries, Mitsubishi Regional Jet (MRJ) and the Irkut/United Aircraft Corporation MS-21 narrowbody family. The competing engine, CFM International’s LEAP-X, has been selected for the Comac C919.

Earlier this week, Pratt & Whitney celebrated the completion of the first PW1524G for the Bombardier CSeries. A court injunction on development or testing could hurt not only UTC/Pratt & Whitney, but also the aircraft manufacturers that have selected the engine.

Waiting on the sidelines

Airbus and Boeing are looking at the PW1000G and the CFM International LEAP-X as a ‘new engine option’ for their existing narrowbodies. Rolls-Royce does not have a competing next generation engine offering available for Airbus or Boeing at this time, and has already come out against the perceived need to offer new engines on the existing narrowbody aircraft.

Instead, the UK engine manufacturer is studying various options for the next generation of narrowbody aircraft, including a open rotor option configuration which it estimates could cut fuel consumption by as much as 30%. In the meantime, Rolls-Royce is avoiding the narrowbody segment, instead concentrating on higher thrust engines for next generation widebodies, as it waits for suitable technology to develop and mature.

The upcoming decision by Airbus and Boeing on whether they will adopt new engines for their existing narrowbodies, or wait and develop all new aircraft by 2020-2025, will reveal whether this attitude will pay off. Rolls-Royce has stated that it does not believe that re-engining “offers any significant net financial benefit to the industry”. It also believes that the returns from a manufacturing standpoint will be much less than a new engine programme and if re-engining does occur it will only serve to delay the introduction of new, and more efficient, aircraft.

Airbus, which has been at the forefront of the re-engine decision, has stated the business case for the option is “really very convincing”. Rolls-Royce on the other hand, without a next-generation offering, does not believe that the business case works.

If Airbus does go ahead, Boeing is likely to follow, potentially putting Rolls-Royce out of the narrowbody engine segment for the foreseeable future (although there are still 2000 V2500 engines in IAE’s backlog).

Strongest on the upside were Bombardier and  GKN Aerospace, each up 1.8%. 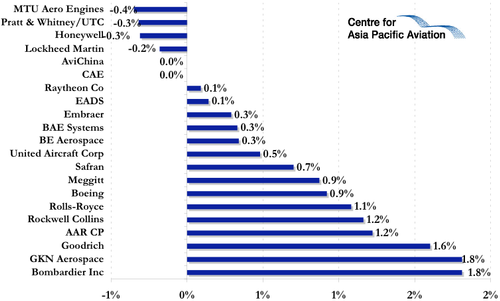 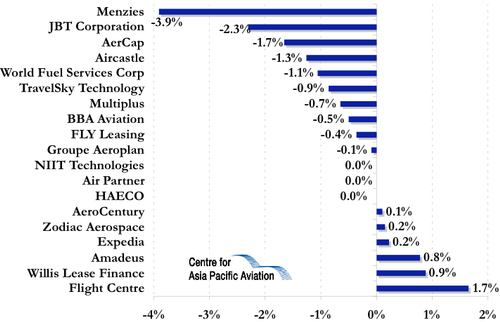