Philippine Airlines (PAL) is planning to resume services to Delhi in early 2019 using its new fleet of A321neos. The new service should help the Philippines attract more Indian visitors and lead to faster growth in what is now the largest unserved market for the Philippines.

PAL recently set a 31-Mar-2019 launch date for four weekly A321neo flights from Manila to Delhi. PAL was previously considering launching services to both Mumbai and Delhi, but PAL is now intending to serve only Delhi.

PAL initially operated widebody aircraft (a mix of A330-300s and A340-300s) to India after launching services to Delhi in 2011. However, the nonstop flights only operated for a few months and were dropped in Oct-2011. The one-stop flights via Bangkok were downgauged to A320ceos in Jul-2012 and dropped entirely in Jun-2013.

The prospects for PAL in the Indian market are much brighter this time around. The Manila-Delhi market – and the overall Philippines-India market – has more than doubled in size over the past five years, making a nonstop service more viable.

PAL is also now able to operate nonstop flights to India with narrowbody aircraft because it recently added A321neos, which have better range than A320ceos/A321ceos and are much more efficient. Widebody aircraft are likely still too large for the Philippines-India market and a one-stop service would not sufficiently differentiate PAL from several competitors.

PAL has taken delivery of five A321neos over the past seven months and is slated to soon receive one more of the type. All six A321neos are configured for long haul operations, having 12 lie-flat business class seats along with 156 economy class seats with seatback IFE.

Port Moresby flights with A321neos began in Aug-2018. Sapporo was launched as a new destination on 7-Dec-2018, with three weekly flights from Manila. PAL was originally planning to launch Sapporo on 10-Sep-2018 but postponed the launch after an earthquake hit Hokkaido Island on 6-Sep-2018, resulting in significant damage and impacting tourism demand.

PAL also has 15 high density A321neos on order for delivery starting in 2019, which are better suited for regional routes as they will have a large economy class cabin and regular recliner seats in business. PAL also currently operates 24 A321ceos on domestic and regional international routes – some of those will be phased out as the 15 higher density A321neos are replaced.

The six long haul configured A321neos are all growth aircraft and are intended for routes (new and existing) of at least five hours. Sapporo and Port Moresby are five to six hours from Manila while Brisbane and Sydney are seven to eight hours. Delhi is six to seven hours.

PAL previously only used widebody aircraft for Brisbane and Sydney whereas Port Moresby was served using A320ceos. However, the A320ceo was not ideal for Port Moresby as an unscheduled fuel stop in Davao was required during certain times of the year (when there were strong headwinds).

PAL launched three weekly flights to Port Moresby in late 2015 and is one of only three foreign airlines serving the Papua New Guinea market (along with Qantas and Virgin Australia). The airline has been successful in the PNG market, competing against Air Niugini for Port Moresby-Manila passengers and offering connections beyond Manila to destinations throughout Asia, as well as to the Middle East and London.

PAL introduced a fourth weekly flight to Port Moresby in Sep-2018. The new four times weekly A321neo schedule to Port Moresby has driven a 44% increase in capacity compared to the prior thrice weekly A320ceo schedule. The transition to A321neos has also significantly improved PAL's product in the Port Moresby market – particularly for the business and corporate segment. Offering lie-flat business class seats is important as the Manila to Port Moresby flight operates overnight.

India is a strategically important market

Sapporo is an entirely new destination and expands PAL’s network in Japan to six destinations. Japan is PAL’s largest international market and currently accounts for nearly 20% of its total international seats.

Cebu Pacific has also been considering India using A321neos, which it is slated to start receiving in late 2018, and previously the airline applied for Philippines-India traffic rights. However, Cebu Pacific does not have any immediate plans for launching any destination in India.

India is the 12th largest source market for the Philippines, based on 2017 visitor data. The other top 12 source markets all have nonstop services – South Korea, China, the US, Japan, Australia, Taiwan, Canada, the UK, Singapore, Malaysia and Hong Kong.

Indian annual visitor numbers to the Philippines and year-over-year growth: 2009 to 2017 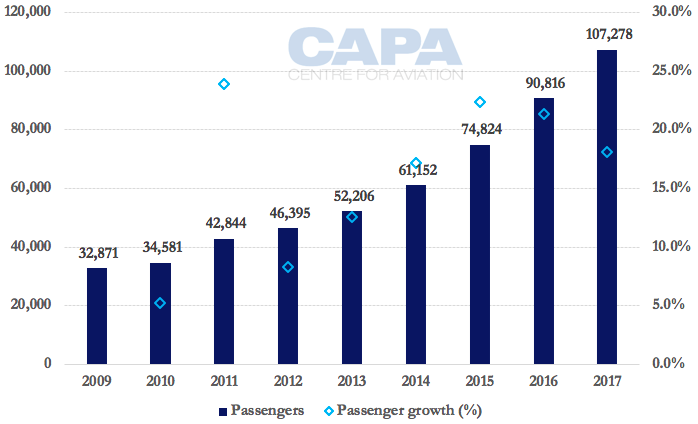 Source: CAPA – Centre for Aviation and Philippines Department of Tourism.

Philippines tourism to benefit from resumption of Indian nonstop flights

Not surprisingly, securing nonstop India flights has been a major objective of Philippine tourism authorities over the past few years. Manila-Delhi flights from PAL should stimulate demand and lead to even faster growth in Indian visitor numbers to the Philippines.

Philippines-India is a relatively fragmented market, with several city pairs attracting relatively large volumes of traffic. The fragmentation benefits sixth freedom competitors, which are able to connect multiple destinations in both countries.

PAL will have to rely on the Delhi market as it does not have a domestic Indian airline partner. In addition to an exclusive nonstop service to Manila, PAL will offer Delhi residents connections to popular island destinations in the Philippines such as Boracay, Palawan and Panglao.

Although there are now enough Delhi residents holidaying in the Philippines to support the new service, overcoming fierce one-stop competition could prove challenging.