With a landmark order for 200 A320neos, AirAsia has committed to increasing its narrowbody fleet to 375 aircraft and expects it will need at least 125 more aircraft as it works on establishing at least two more joint venture carriers. The deal, signed at the Paris Air Show on 23-Jun-2011, is the largest ever single order placed with Airbus in terms of number of aircraft. It also extends the total number of aircraft sold by Airbus this week to 730 – an all-time air show record – and even more impressively means the manufacturer has now sold over 1,000 A320neos since the programme was launched only six months ago.

AirAsia also has announced a revised delivery schedule for the remaining 86 A320s from its previous orders. AirAsia will still take seven A320s in 2H2011 as previously planned but has increased its 2012 figure from 12 to 14 aircraft. However, AirAsia has decreased its 2013 deliveries from 24 to 13 aircraft and its 2014 deliveries from 24 to 18 aircraft.

In 2015 AirAsia will take 19 aircraft as previously planned. It will take its final 15 current generation A320s in 2016 before switching over to the neo. AirAsia previously was scheduled to take the last A320 from its prior 175-aircraft commitment in 2015. The initial delivery schedule had the last of these aircraft arriving in 2014 but a series of deferrals announced over the last two years resulted in several 2011 and 2012 deliveries being pushed back to 2015. The A320neo order announcement essentially includes a new deferral of aircraft that were slated to be delivered in 2013 and 2014. 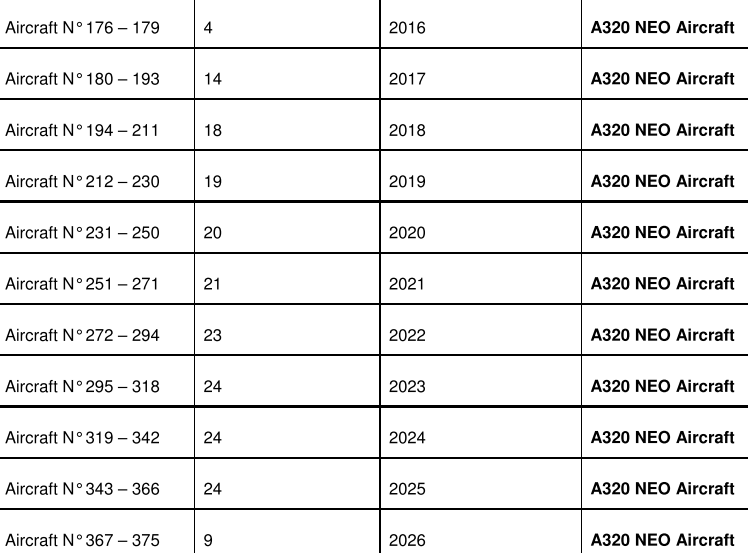 Although AirAsia for now has not included any options or purchase rights in the 200-aircraft deal, AirAsia Group CEO Tony Fernandes sees potential for at least another 125 aircraft for a total group fleet of 500 A320s. Flanked by the CEOs of all of AirAsia’s affiliate carriers, Mr Fernandes told reporters after signing the contract to acquire the 200 A320neos that he believes the Southeast Asian market has potential to easily support 500 aircraft. “We’re in a market of 500 million people. If you add in China and India it’s one billion,” Mr Fernandes said, pointing out the propensity to travel is rapidly increasing in the region as the economies grow.

Mr Fernandes also pointed out how the world’s largest low-cost carrier, Southwest, operates in a market of only 300 million people. Southwest, when including its new AirTran subsidiary, currently has a fleet of 690 aircraft with another 154 on order. CAPA, in analyzing last week AirAsia’s expected A320neo order, concluded that AirAsia could jump six places over the next decade and become the world’s second largest low-cost airline, ahead of Ryanair, easyJet, JetBlue, Air Berlin and Gol. Surpassing Southwest, at least for now, appears unlikely.

Thailand and Indonesia to receive large allocations from new order

In discussing the new order, Mr Ferndandes said AirAsia’s “very successful” affiliates in Thailand and Indonesia would be receiving a large chunk of the 200 additional aircraft. The original Malaysian carrier is not expected to grow its fleet as significantly because it now has a majority of the existing aircraft and the Malaysian market is more mature.

Mr Fernandes said the Indonesian market in particular “is about to explode” but added he is also “very optimistic on the Philippines and Vietnam”. AirAsia’s new joint venture carriers in the Philippines and Vietnam are now slated to launch services in 4Q2011 and Mr Ferndandes revealed the group also has begun working on “a couple of other joint ventures”. He added: “There’s a few more around the corner so there is tremendous growth in store for us.”

AirAsia's current fleet and allocation for each affiliate and hub

Mr Fernandes said AirAsia has “plenty of options” for financing the mega order, valued at USD18 billion based on list prices, but said the debt market remains very attractive to the group. He pointed out that of the 87 A320s already delivered to AirAsia, only four were sold and leased back. He also pointed out that by the time the A320neos start arriving in big quantities, AirAsia will have already entirely paid off the loans used to finance some of the aircraft from its initial order. Mr Fernandes also says the A320 has proven to be a big cash generator for AirAsia and he expects the A320neo will be able to generate even more cash for its affiliates.

From a balance sheet perspective, the upcoming IPOs at AirAsia Indonesia and AirAsia Thailand will also make it even easier to fund the acquisition than the group’s previous smaller orders. Eventually Mr Fernandes also expects there will be IPOs at the new affiliates in the Philippines and Vietnam. “We are planning to grow but not grow our balance sheet. If anything it’s going the other way,” he said.

The order did not come as a surprise as it was widely reported in the weeks leading up to the Paris Air Show that AirAsia was closing in on a mega order. Mr Fernandes also hinted during his 1Q2011 presentation and conference call with analysts that an aircraft order could be imminent. During the presentation, he said AirAsia had determined it would need to grow its fleet by the end of 2020 to 310 to 520 “A320 equivalent aircraft”.

The new order, however, only gives AirAsia a fleet of 250 aircraft at the end of 2020. AirAsia will therefore need to significantly accelerate its current A320 and A320neo delivery schedule to meet its vision of operating at least 320 aircraft by 2020. Such an acceleration could occur after the IPOs in Indonesia and Thailand are completed, which is expected within the next year. The IPOs will allow these carriers to fund their own fleet expansion and not force the single Malaysian-listed company to have to finance the entire order. Mr Ferndandes has previously stated that AirAsia would be able to triple its rate of fleet expansion once the IPOs in Indonesia and Thailand were completed.

Airbus and AirAsia first signed MOU for A320neos in Feb-2011

During the Paris press conference, Mr Fernandes revealed that AirAsia first tentatively committed to the 200 A320neos as part of an MOU which was signed in Feb-2011 but never announced.  However, the firm contract was still being negotiated into the late hours of 22-Jun-2011, giving Airbus CEO Tom Enders some concern it would not be concluded in time for a Paris Air Show announcement.

In the end the timing was “impeccable” according to Mr Enders, as it allowed the order to be announced on the fourth day of the air show (the last of the significant trade days), when Airbus always likes to make a big last splash. “The best we keep, as we can, for the end of air shows and this time we have impeccable timing,” Mr Enders said.

While the order is the largest ever for Airbus in terms of number of aircraft, it is the third largest in terms of value behind earlier mega orders from Emirates and Qatar Airways. “They had lots of cash with oil,” Mr Fernandes joked. “We had to do it the hard way.”

With 730 aircraft sold so far this week, Airbus also has beaten its earlier best-ever air show tally of 728 aircraft. In terms of value, however, this week’s showing is still second best after the 2007 Paris Air Show. The 730 aircraft figure includes firm purchase orders and MOUs announced this week, excluding the purchase order signed at the show by India’s IndiGo. The IndiGo deal, which covers 150 A320neos and 30 current generation A320s, was first announced by Airbus in Jan-2011 as an MOU.

Of the 730 aircraft sold at the Paris Air Show, 660 are A320neos. Over the last few months, Airbus had said it expected to have 500 A320neo sales by the end of Paris but instead it has now sold more than double that – 1,029. Mr Enders said A320neo sales have far surpassed his expectations and the figure he provided to the Airbus board before it approved the re-engining project late last year.  “I didn’t think it would be such a best seller only six months after its launch,” he said.

Mr Enders couldn’t resist taking an end of the air show jab at Boeing, which has not yet decided whether to re-engine the B737NG or launch an all new narrowbody programme: “If after this show our colleagues in Seattle still maintain the neo is only catching up with their 737NG I really ask myself what stuff are these guys up in Seattle smoking?”

Mr Enders claimed for several of the orders announced this week the negotiations concluded at Paris, leaving some uncertainty that the deals would be completed in time for an air show announcement. “It's been one of most spontaneous air shows for orders,” he said. “We had even customers decide on the spot to sign for an MOU, particularly for the neo.”

Mr Enders said Airbus will analyse whether to further raise A320 production rates in response to the high demand for the neo. Airbus is already committed to increasing single aisle production to 42 aircraft per month by the beginning of 2013. Airbus could implement a further ramp up to coincide with the start of A320neo production in 2015.

Mr Leahy said there are now slots available for the current generation A320 in 2014 and beyond. He said a transition period of at least 30 months is required to switch the production line entirely from the current model to the neo. As a result, Airbus will produce A320s alongside A320neos from 2015 until at least 1Q2018. Mr Leahy said Airbus will have the flexibility to continue producing the current generation A320 beyond 1Q2018 but if the market demands only the neo it will discontinue the older model at that time.

Mr Enders and Mr Fernandes talked at length about the Airbus-AirAsia relationship and how it has blossomed over time to the benefit of both companies. Mr Fernandes reminisced how he told Airbus in 2005, when placing its first A320 order, how the manufacturer should give him a good deal because one day he would buy 500 aircraft. But even with his 2005 prediction, Mr Fernandes said it is hard to believe AirAsia would ever place such a large order given its humble roots and the fact many claimed the low-cost model wouldn’t work in Asia. “Not many believed us but Airbus did,” he said.

AirAsia initially operated a fleet of leased B737 classics, starting in Dec-2001 with only two airplanes. The group's last four B737s, which are now operating in Indonesia, will be phased out later this year. “It’s been a remarkable growth in such a short period,” Mr Fernandes said.