Norwegian Air Shuttle’s 2013 net profit fell by 30% in the face of rapid capacity expansion, the launch of its first long-haul routes, delays to Boeing 787 deliveries, the negative impact on demand of good summer weather and a very price competitive market place. In short, anything but a run-of-the-mill year. The upshot was that, while its unit cost (CASK) fell in line with its target, its unit revenue (RASK) dropped more rapidly.

The granting by Irish regulators of an air operator’s certificate and operating licence to Norwegian’s Dublin-based long-haul operator and its recent order for four more 787s (bringing the total to 14: eight 787-8s and six 787-9s) are positive steps in its expansion into long-haul markets, where it has a cost advantage against legacy carriers. Nevertheless, there are some lower cost rivals on short-haul, where most of Norwegian’s business still lies.

The downward pressure on RASK looks likely to continue in 2014, particularly given Norwegian’s planned capacity growth of 40% (in ASK terms). A return to profit growth will therefore, it seems, need a further significant CASK cut.

In 2013, Norwegian reported a 30% fall in net profit to NOK319 million (EUR41 million). This result was adversely affected by non-cash currency losses on USD denominated borrowings due to the weakening of the NOK.

The reported operating result grew by 140% to NOK970 million (EUR124 million), but this also contains non-operating currency items that boost this result. Adjusting the operating result for ‘other gains/losses’ perhaps better reflects the underlying performance of the business. The adjusted operating profit derived in this way was NOK481 million (EUR62 million), down 34% against 2012. Norwegian says that this result was hit by long-haul start up costs (in particular wet lease costs as a result of delays to Boeing 787 deliveries) and the effect on bookings of better than usual weather in the summer.

The fall in net profit and in operating profit before other gains/losses in 2013 means that both results were back below the levels reported in 2009, which was the year of Norwegian’s bounce back from a heavy operating loss in 2008. While the extra costs associated with the long-haul start up, particularly those relating to 787 delivery delays, should not recur, Norwegian’s rapid capacity expansion and network diversification does bring the on-going risks of additional cost and weak pricing.

Revenue growth continues to be impressive, achieving a compound average growth rate of 29% pa from 2005 to 2013, but converting this into sustained profit growth is more challenging. 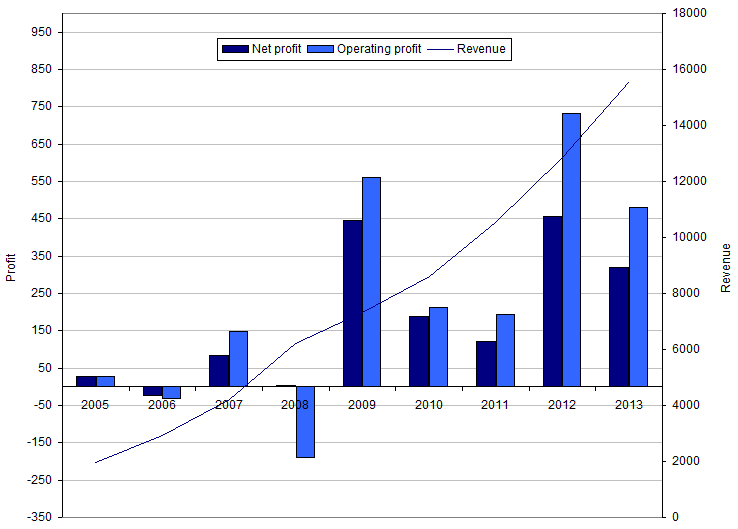 Norwegian’s rapid fleet expansion of recent years has led to a growing net debt balance. At the end of 2013, net debt stood at NOK4.3 billion, compared with NOK3.8 billion a year earlier. This was around 1.6 times the book value of its equity and, although this ratio has been stable for three years, the multiple of adjusted net debt (including operating leases capitalised at eight times annual rentals) to equity was 5.3 times.

Norwegian’s gross cash balance of NOK2.2 billion is equivalent to 51 days of revenues and its balance sheet is adequate, but it will not want to let its financial gearing rise too much further. 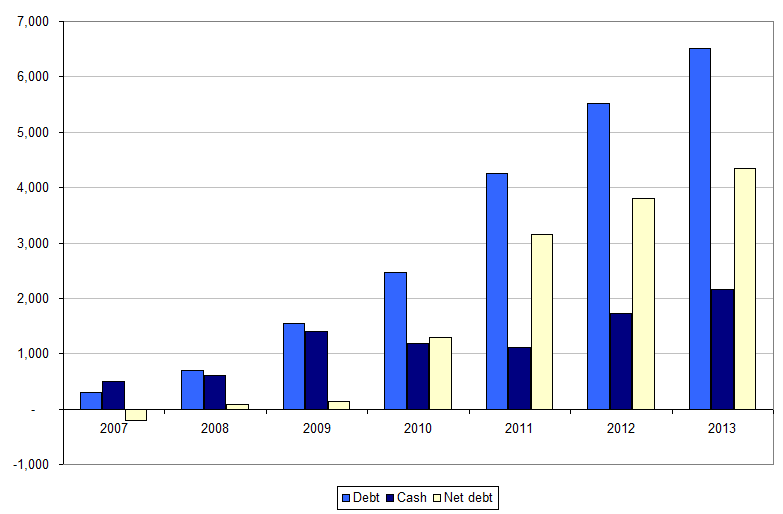 ASKs increased by 32% in 2013, accelerated by new long-haul operations

In 2013, Norwegian increased its ASKs by 32% and this was matched by RPK growth so that passenger load factor remained almost stable (down 0.2ppts) at 78.3%, although this is a full percentage point down on its 2011 level. Rapid capacity expansion can place strain on load factors and Norwegian has had to discount its fares in order to counteract this. With 40% ASK growth planned for 2014, these pressures are not about to disappear.

Growth in passenger numbers, at 17%, was slower than ASK and RPK growth as average trip lengths grew by 13%. Norwegian’s expansion in 2013 onto its first long-haul routes accelerated a trend that has seen average trip length gain 58% since 2005.

Long-haul operations started with routes to New York and Bangkok in summer 2013. 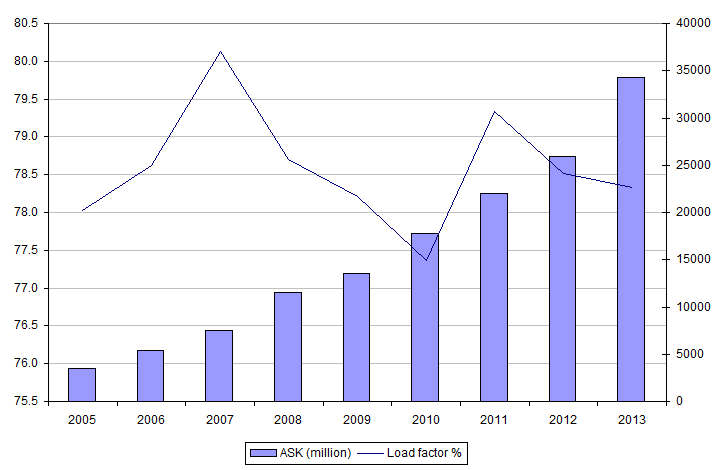 There were market share gains at all key bases

Norwegian continues to see growth in passenger numbers and in its share of passengers in all its key European bases (Oslo, Stockholm, Copenhagen, Helsinki, London Gatwick and its four Spanish bases). In 4Q2013, its market share in Oslo was 41%, while at Stockholm and Copenhagen, it was 23% and 16% respectively. At London Gatwick, its share of passengers reached 10% for the first time. 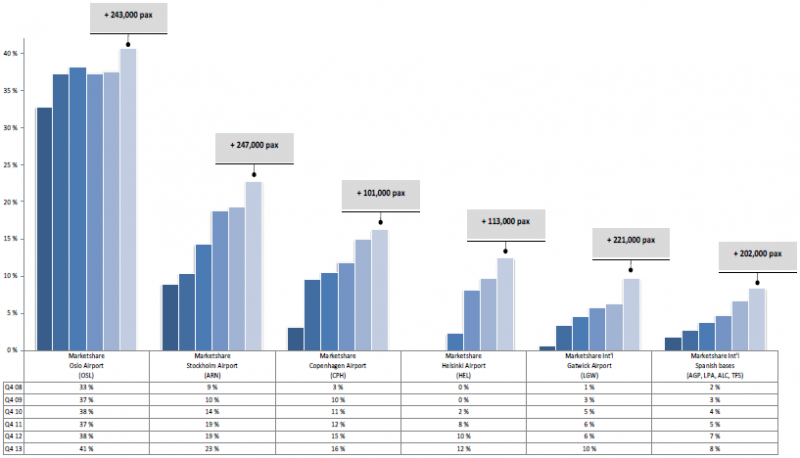 Revenue growth is driven by international routes and ancillaries, but RASK falls 8.5%

Total revenue per ASK fell by 8.5%, reflecting weaker yields as a result of strong capacity expansion and some weakness in demand in the summer due to the good weather in northern Europe.

Revenue growth, although less than capacity growth, remained in the double digit zone, up 21%. International routes continue to drive Norwegian’s revenues, accounting for 72% of total revenues in 2013, up from 68% in 2012 and 60% in 2009. Domestic revenues grew by 9%, compared with international revenues’ growth of 27%. 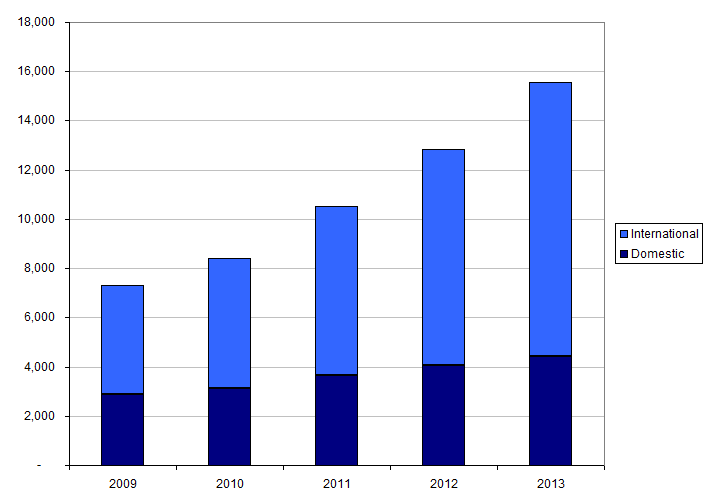 Breaking revenues down by activity, ancillary revenues performed strongly and grew by 25% to account for 11% of total revenues. Passenger revenues grew by just under 20% to form 86% of the total.

Operating costs at the reported EBIT level increased by 17%, slower than the growth in ASKs and revenues and in line with growth in passenger numbers. Reported cost growth was contained significantly by the line ‘other losses/gains’, which fell from NOK329 million (EUR39.3 million) in 2012 to a gain of NOK489 million (EUR58.4 million) in 2013. This item relates to gains on forward currency contacts to counter revaluation effects from UDS loans and on working capital in foreign currency.

Without these items, total costs were up 25%, faster than revenue growth. Non-fuel costs grew by 24%, while fuel costs grew by 25%. Labour costs increased 20% and, although Norwegian has not yet published its average headcount for the year, its quarterly statements suggest that the workforce grew by around 30%. This would seem to indicate a reduction in employee cost per employee. Norwegian says that salary increases and increased hiring/training costs were more than offset by the increased productivity and sector length derived from international production.

CASK fell by 6.0% and ex fuel CASK fell by 6.2% on this basis. Unfortunately, while Norwegian hit its CASK target, these declines did not match the fall in RASK in 2013.

Norwegian has established a reasonable track record in lowering its unit cost in recent years. Since reporting an operating loss in 2008, it has lowered its CASK by 21% and its ex fuel CASK by 22% (based on operating costs excluding the line ‘other gains/losses’).

Over the same period, total revenue per ASK has also fallen, but by the lesser amount of 16%. While the broad sweep of these trends is satisfactory, the underperformance of RASK relative to CASK in 2013 is not. 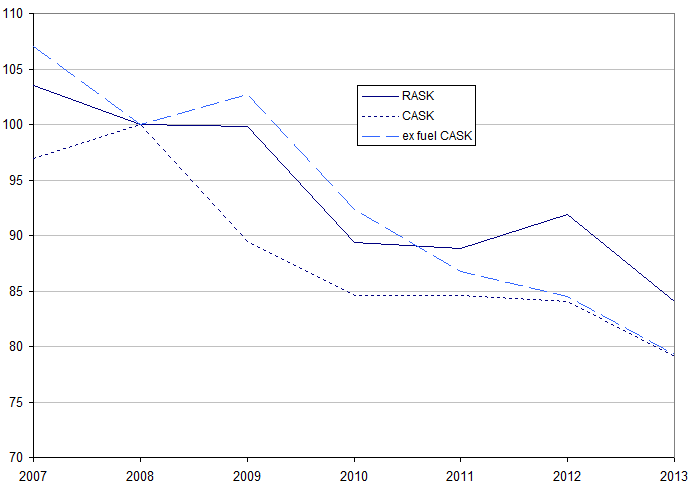 **cost per ASK, based on reported costs at the EBIT level, excluding other gains/(losses)
Source: CAPA – Centre for Aviation, Norwegian Air Shuttle

Moreover, to a large extent, Norwegian’s falling unit costs are just a function of its increasing average trip length. As we have observed previously, one of the difficulties in assessing its unit cost progress is that CASK reduces mechanistically as average sector length grows (as does RASK: the trick is to try to ensure that RASK falls at a slower pace than CASK, but this was not achieved in 2013).

The small, but growing proportion of long-haul capacity in Norwegian’s total ASKs will lower CASK regardless of any underlying cost efficiency measures. The chart below suggests that the CASK level achieved in 2013 was consistent with the increase in average trip length and the path of CASK reduction/trip length increase followed by Norwegian in recent years. 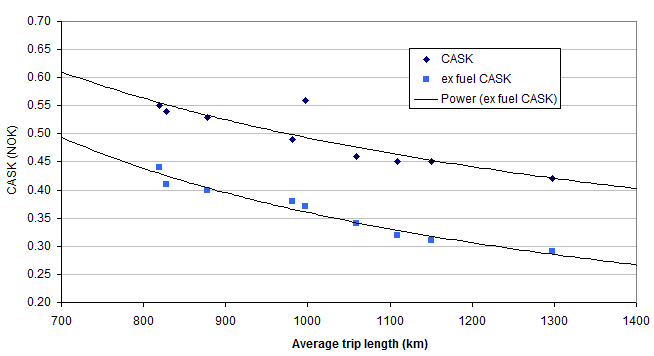 CASK reduction target for 2014 may not be enough

The chart below shows CASK against average trip length for selected European airlines in 2012 (for SAS, Finnair and Norwegian, who have reported 2013 results, the chart is updated to 2013). The light blue dotted line of best fit for European LCCs shows the level of CASK that would be expected for a given average trip length.

Norwegian’s 2013 CASK sits on this line, so it is where it should be for a low-cost operator flying the distances that it operates.

If we compare its 2013 position to where it was in 2008, when it made an operating loss, we can see that its CASK has fallen more rapidly than the increased trip length alone would explain. We can deduce that management action may have accelerated the CASK reduction over this period, although the introduction of long-haul routes in 2013 means that we are not comparing like with like.

Looking ahead, Norwegian’s 2014 targets imply a reduction in CASK of around 5% this year, which does not seem particularly ambitious, especially given the strong growth in average trip length. If downward pressure on RASK continues (as Norwegian seems to anticipate, saying in its statement that it expects “increased competitive pressure in the Nordic market place” and referring in its results presentation to “yield pressure from capacity investment), it may need a more ambitious CASK reduction target. 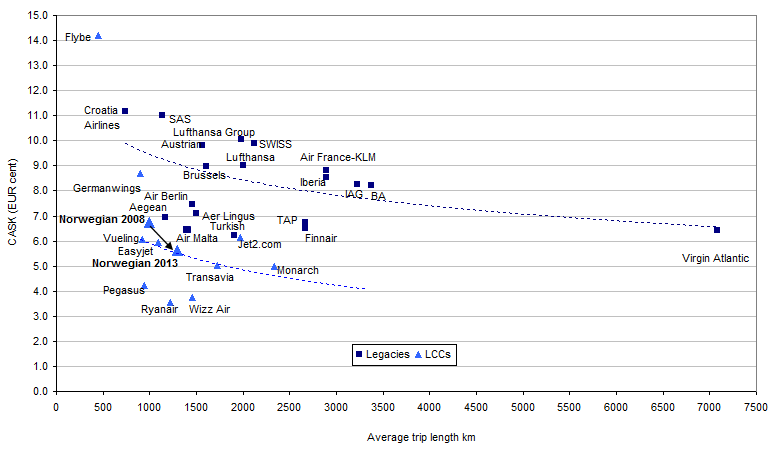 If so, this leaves it exposed to price-based competition from larger and lower cost LCCs on its European network, but considerably lower cost than the European legacy carriers on its intercontinental routes. The recent granting of an air operator’s certificate to its Dublin-based long-haul subsidiary Norwegian Air International Limited is a further boost to its long-haul low-cost ambitions. Its application for a US foreign operator permit, if granted, will be the final step in the reorganisation of its long-haul operations. Meanwhile, it says that the planned new long-haul routes this summer have been well received by the market.

Nevertheless, the bulk of Norwegian’s operations are still very much in the competitive short-haul market and, on long-haul, it still faces a significant management challenge as it adds to its 787 fleet, opens new routes and recruits crew in remote bases.

It will be a major achievement to increase profits once more in 2014.