Norwegian Air Shuttle’s 2012 results confirmed its position as the Nordic region’s most consistently profitable airline and the one with the lowest unit costs. This year represents a critical turning point for Norwegian. In 2013, it will establish its first base in a major capital city outside Scandinavia (at London Gatwick) and set up a base in the highly competitive mainland Spanish market. Moreover, it will also launch long-haul routes to New   York and Bangkok. Only time will tell if 2013 proves to be the point where Norwegian turned up or turned down. This may depend on what the future holds for regional competitors SAS and Finnair.

On long-haul, it will encounter efficient competitors from much lower wage economies and well established strongly branded operators from Europe, while on short-haul it will meet embedded lower cost competitors that will not have the distraction of start-up long-haul operations. Looking further ahead, it will need more bases around Europe in order to achieve the double-digit growth rates demanded by its ambitious fleet expansion over the next decade or so. It may also need to consider recapitalising its somewhat slight balance sheet. 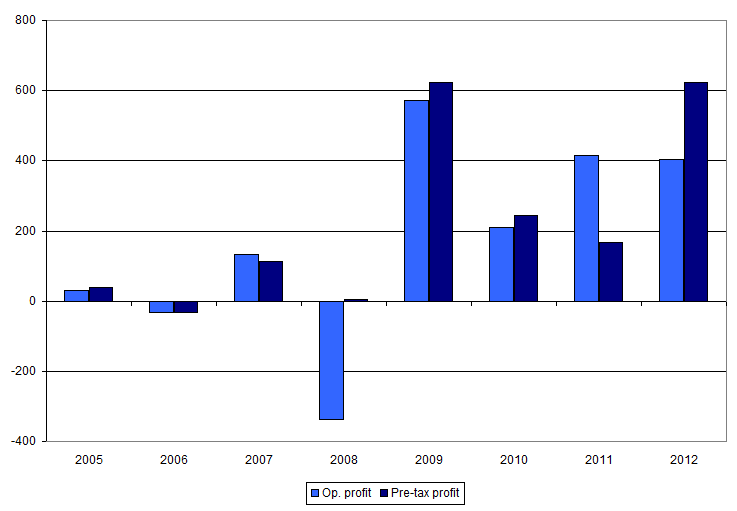 Norwegian has, for a number of years, spent more on capital expenditure than it generates in operating cash flow, meaning that debt levels have grown year by year. Net debt stood at NOK3.8 billion (EUR512 million) at the end of 2012. Although balance sheet gearing (net debt to equity) fell from 162% in 2011 to 157% in 2012, these levels are sharply higher than the 10% gearing of 2008. With a significant proportion of the fleet financed through off-balance sheet operating leases and more than NOK1 billion in annual lease payments, adding capitalised operating leases to net debt would add a further NOK7 billion or NOK8 billion to the NOK3.8 billion (EUR512 million) reported (as a rule of thumb, operating leases are capitalised at seven or eight times annual lease payments). Taking operating leases into account, Norwegian’s balance sheet looks a little slight and it may need to consider addressing this before completion of its ambitious aircraft delivery programme.

At the end of 2012, Norwegian had a gross cash pile of NOK1,731 million (EUR233 million), equivalent to 49 days of revenues. In an industry beset with unexpected one-off events, this is a reasonable cushion, but is less than Lufthansa’s 60 days, easyJet’s 77 or Ryanair’s remarkable 232 days. 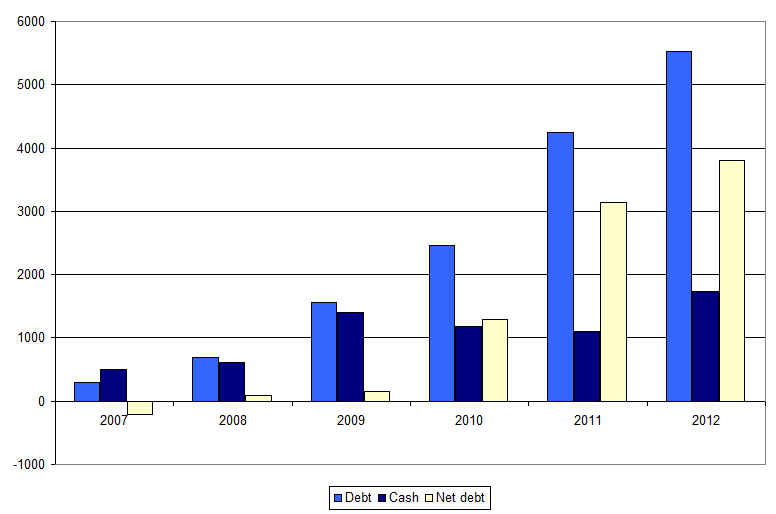 Norwegian has seen strong growth in traffic in recent years, with passenger numbers growing at a compound average annual rate of 21% from 2005 to 2012. 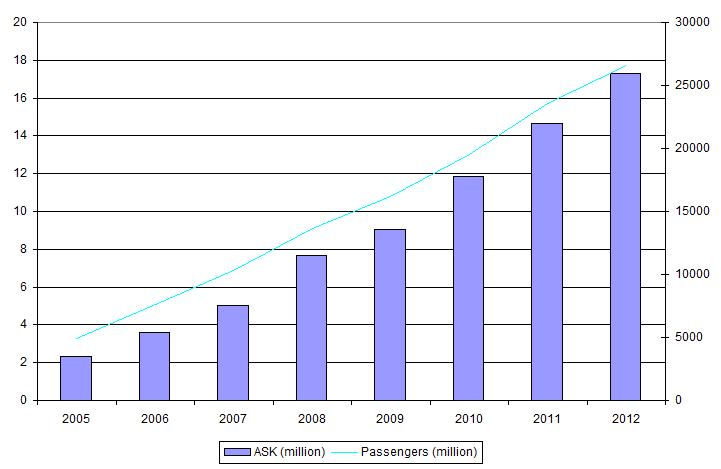 Norwegian’s market share in its home base of Oslo has stabilised at around 38%, with little movement since 2009. In Stockholm it has settled at half of its Oslo share, at 19%. In the other key Nordic hubs, Copenhagen and Helsinki, its 2012 market share was 15% and 10% respectively and it saw growth in this share. At London Gatwick it had a stable 6% share in 2012, while its share at its Spanish bases grew from 6% in 2011 to 8% in 2012. 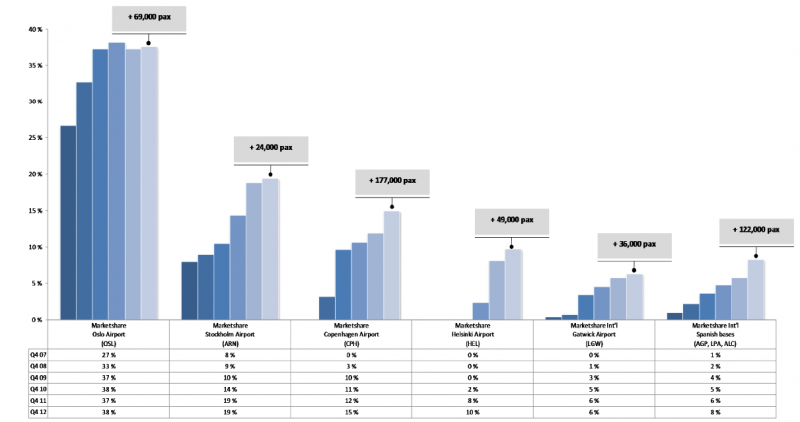 The importance of Oslo and the Nordic region to Norwegian, in particular domestic routes, is further highlighted by looking at its top 10 domestic and international routes. Its four biggest routes by seat capacity are domestic and only three of its international routes would rank in its overall top 10. These three – Oslo to Copenhagen, Oslo to Stockholm Arlanda and Stockholm Arlanda to Copenhagen – are all intra-Scandinavian routes. 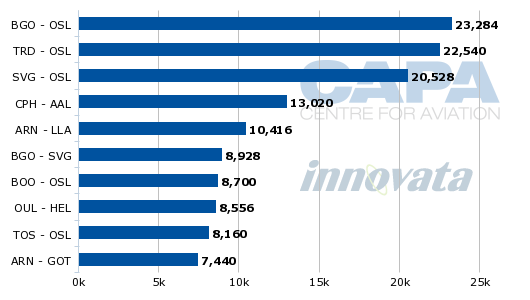 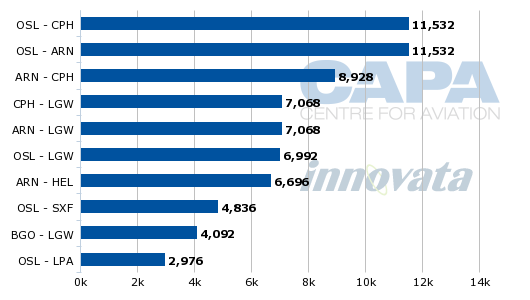 Oslo is more than twice as important a hub to Norwegian, measured by its seat capacity at the airport, than its number two base Stockholm Arlanda. Only two of its top 10 bases, Gatwick and Las Palmas, are outside the Nordic region. 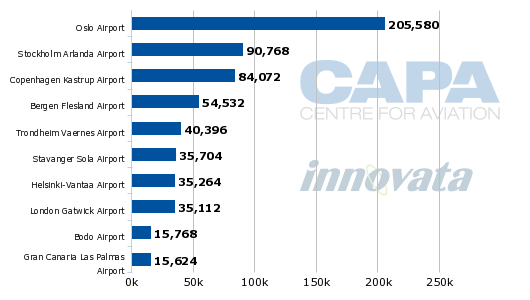 Although domestic Norway routes are Norwegian’s most important by seat capacity, the proportion of its revenues coming from international routes has grown from 60% in 2009 to 68% in 2012. Ancillary revenues accounted for 11% of total revenues in 2012, the same as in 2009, but down from a peak of 12% in 2010. Competitors such as Ryanair and easyJet generate around 20% of revenues from ancillary services and products, suggesting this may be an area for Norwegian to look for growth. 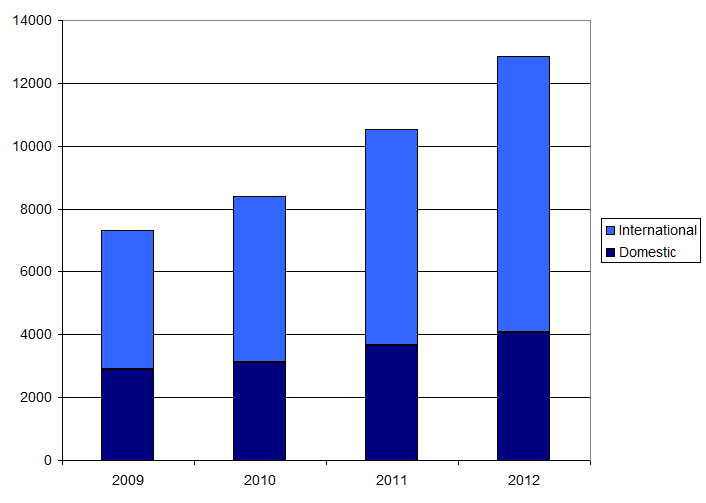 Norwegian has seen a welcome reversal in what was a falling RASK trend, with modest increases in both 2011 and 2012 after three years of declines before that. These RASK increases have come in spite of increases in average sector length and suggest that Norwegian has developed real pricing traction in spite of strong capacity growth. This pricing power probably reflects greater capacity restraint on the part of near competitors and Norwegian’s still lower prices than rival flag carriers.

Costs growing a little faster than revenues in 2012

Fuel remained Norwegian’s biggest operating cost in 2012, accounting for 34% of the cost base. Labour reduced its share of costs slightly from 20% to 19%, a welcome trend given the high wage rates in the Norwegian economy. Total operating costs grew by 23%, slightly faster than revenues.

In our report ‘European airlines’ labour productivity’, we highlighted that Norwegian has high employee costs per employee, but also high productivity in terms of ATK per employee. These two measures combined put it somewhere in the middle of the pack among European airlines when it comes to employee cost per ATK. Our analysis for Norwegian was based on its 2011 results. When using 2012 figures, its labour productivity trends are all moving in the right direction, but the overall conclusion remains that Norwegian’s good productivity levels are handicapped by high wage rates in Norway.

This point was further highlighted by the airline’s 4Q2012 results presentation, which included a chart comparing wage rates in Norway with selected other countries. Norwegian’s plans to expand on long-haul routes will bring it into competition with carriers based in much lower wage economies, particularly in Asia and this competition will be a challenge to these plans.

Monthly gross salary (NOK) in Norway and selected other countries 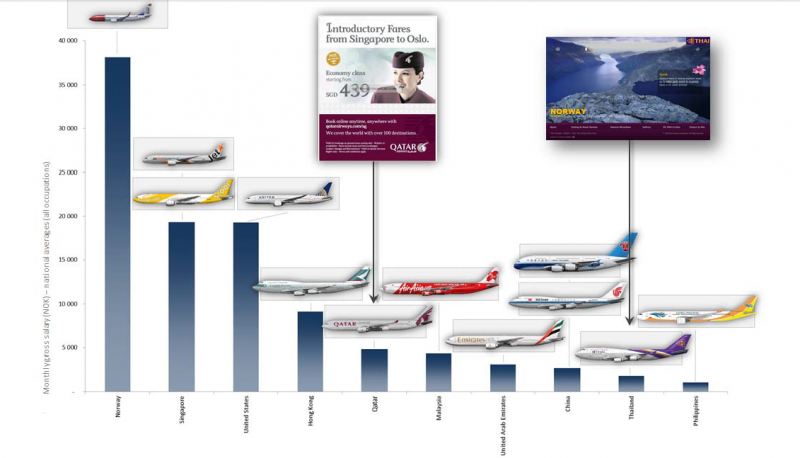 Since 2008, when Norwegian recorded an operating loss and a pre-tax result only just above breakeven (this was principally due to its fuel costs more than doubling), its return to profit was characterised by unit cost reduction (helped in 2009 by a fall in fuel costs). Although unit costs fell each year from 2009 to 2011, they saw a slight increase in 2012. Over the same period, Norwegian’s unit revenues (RASK) initially fell at a slower rate than unit costs before rising alongside CASK in 2012. As noted above, Norwegian appears to have developed pricing power to offset cost increases with fare increases, but this should not reduce the focus on lowering unit costs ex fuel. 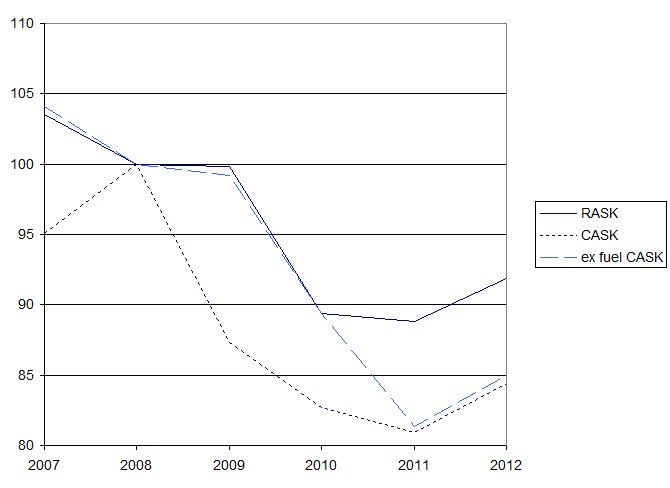 Norwegian expects a 25% increase in capacity (ASKs) in 2013, due to fleet growth, an increase in average sector length (driven by its UK and Spanish bases) and the launch of long-haul operations. It qualifies this expectation by saying that capacity deployment will depend on the economy and developments in the market place.

In Spring 2013, it will open new bases at London Gatwick, where it is already the number three carrier behind easyJet and British Airways by seat capacity, and Alicante (Spain), where it is number five behind Ryanair, easyJet, Iberia and Vueling. Planned long-haul route launches are summarised in the table below.

In terms of fleet growth, it has 14 new Boeing 737-800s scheduled for delivery in 2013 and also expects to take delivery of its first 3 Boeing 787-8s. Its long-haul launch will be dependent on whether or not Boeing proves able to deliver these Dreamliners as scheduled in April, June and November. Boeing has told Norwegian that the delivery schedule for the first aircraft is at risk, although it has not yet confirmed any delay. Norwegian has indicated that it plans to fulfil its long-haul schedule this year, whether it uses the 787s as planned or leases other aircraft as cover. Clearly it needs to provide certainty to its customers, but the short-term lease of other aircraft would bring additional cost (although it may possibly be able to seek compensation from Boeing) and operational complexity.

The largest order in European history 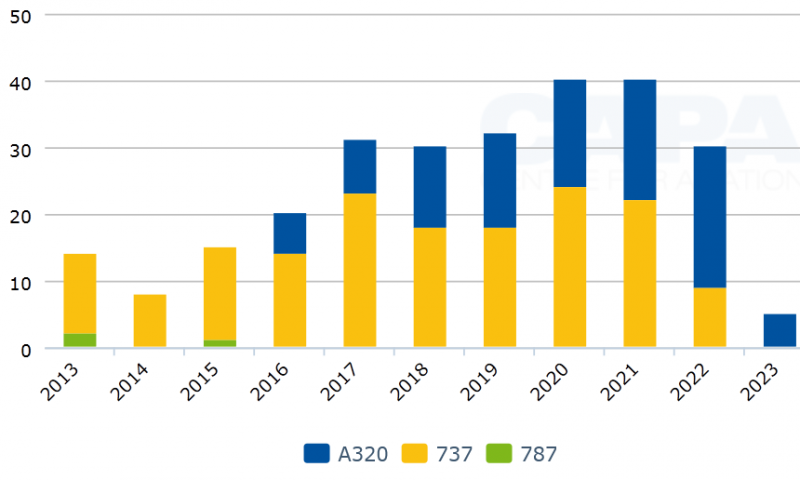 Source: CAPA – Centre for Aviation
* Excludes new aircraft that are coming from leasing companies Aircraft operated by subsidiaries/associates of the main carrier may be listed separately. 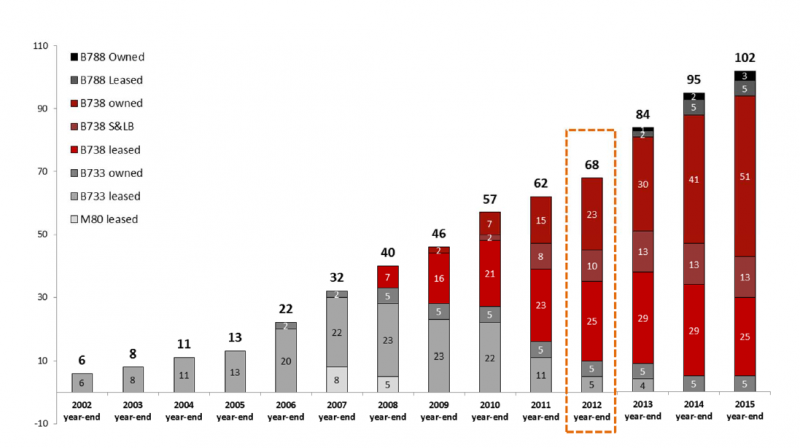 Setting aside the financing of the orders, there are three key strategic questions arising from Norwegian’s fleet plans. 1) Will its markets be big enough to absorb the number of aircraft on order? 2) Will moving from a short-haul fleet with a single aircraft type (Boeing 737) to two aircraft types (adding A320 NEOs) reduce operational efficiency? 3) Will the addition of long-haul be successful?

The answer to the first question – will Norwegian’s markets absorb the fleet growth? – is probably the most important of the three. Its fleet plans imply double-digit growth rates for most of the next decade, even after allowing for Norwegian’s policy of replacing aircraft after seven years. In an industry that typically delivers low to mid single-digit traffic growth, Norwegian will need to continue to capture market share gains in order to fill the new aircraft. With 268 short-haul aircraft to be delivered out of the total on order of 276, this will mean increasing its share of European short-haul markets. It has achieved double-digit growth rates for several years, but this has mainly been in the Nordic region. It is taking steps to expand from its Nordic strongholds to other parts of Europe, particularly in the UK and Spain, but those markets already have well established lower cost competitors in the form of easyJet, Vueling and, in particular, Ryanair. Norwegian is presumably also taking the view that SAS will disappear.

Regarding the second question, moving to a two-supplier fleet, CEO Bjorn Kjos said at the time of the order that “Norwegian has now reached a size where we will benefit from having two suppliers, both in terms of ensuring adequate flight capacity, flexibility and competition between two manufacturers”. The size of both the planned Boeing and Airbus fleets should ensure that it benefits from scale economies, although there are likely to be some initial inefficiencies when the new Airbus fleet is still small.

To some extent, the answer to this second question also depends on how much Norwegian is paying for its aircraft and this, of course, is not public information. The scale of the orders should have helped Norwegian to get significant discounts from list prices and it should also have benefited from being the European launch customer for the 737 MAX. Nevertheless, it must be at least be open to question whether Norwegian managed to achieve the ‘once in a generation’ type of discounts that Ryanair, for example, achieved with its 737-800 order (especially given that Ryanair walked away from a new Boeing deal in 2010).

In order to succeed on long-haul, Norwegian will need to compete with very efficient carriers from low wage economies in addition to well-established well branded airlines from Europe. It will be a challenge, but it may be able to carve out a long-haul niche from its Nordic bases and, possibly, its growing position at London Gatwick on targeted routes. It may also benefit from any further liberalisation of traffic rights on a global basis, if it can prove to be more nimble than its legacy carrier competitors. However, it is the short-haul network that is likely to be the key to Norwegian’s long-term success. If Norwegian’s fleet expansion plans are not successful, it may need to develop skills as a lessor in order to place all the unwanted aircraft.