Norwegian improves its 1Q2013 results, but widebody profits may be one for the long-haul

Norwegian Air Shuttle narrowed its net loss in 1Q2013 and turned its operating result around from a loss of NOK574.6 million (USD99 million) to a profit of NOK69.2 million (USD12 million). Capacity continues to grow rapidly, with ASKs up 21% (11% due to longer average sectors), but load factor dipped by 1ppt to 76%.

Nevertheless, RASK grew 2% and revenues were up 23%, while unit costs were down 8%. Further CASK reduction remains a key target and the establishment of new bases outside high wage Scandinavia, both in Europe and in Asia, provides an opportunity to lower labour costs.

Norwegian recently announced a seventh widebody route (Oslo-Fort Lauderdale) for its long-haul network, which will launch on 30-May-2013 along with Oslo-New York. Its strategy of growing long-haul operations through new routes at the expense of frequency will help it to establish a wider presence more rapidly, but will reduce the available cost efficiencies at remote bases and restrict its appeal mainly to the leisure passenger. Norwegian’s long-haul network may struggle to be profitable for some time.

This load factor dip was a reasonable result given the capacity expansion and growth in new routes. The fleet, including wet lease, comprised 74 aircraft at the end of the quarter and the average daily utilisation in the quarter was 10.6 hours, up from 10.2 hours a year earlier. 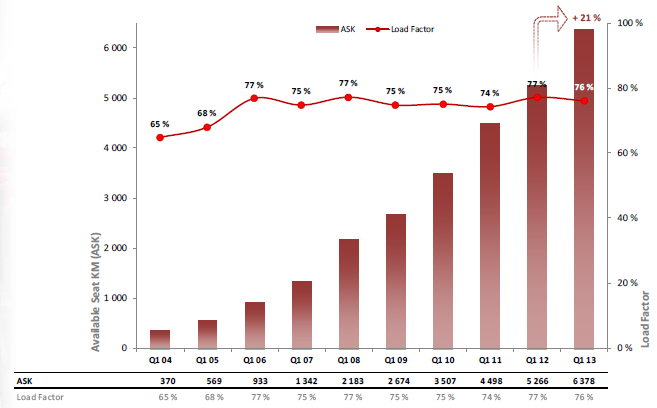 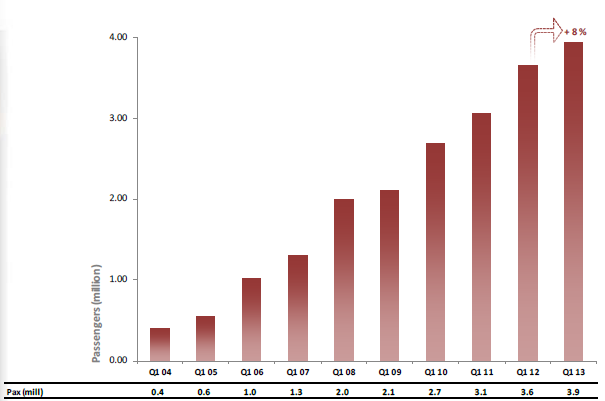 Norwegian’s first quarter market share in its home base of Oslo has stabilised at around 36%, with little movement since 1Q2010. In Stockholm it has settled at half of its Oslo share, at 18%. 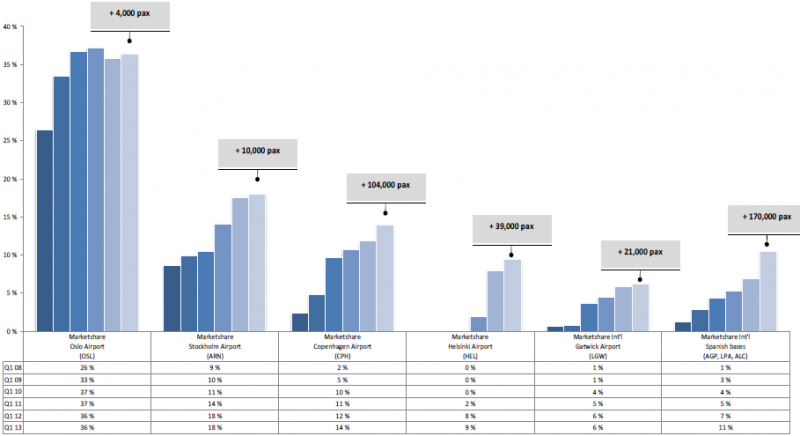 RASK up 2%; international revenues up 25% 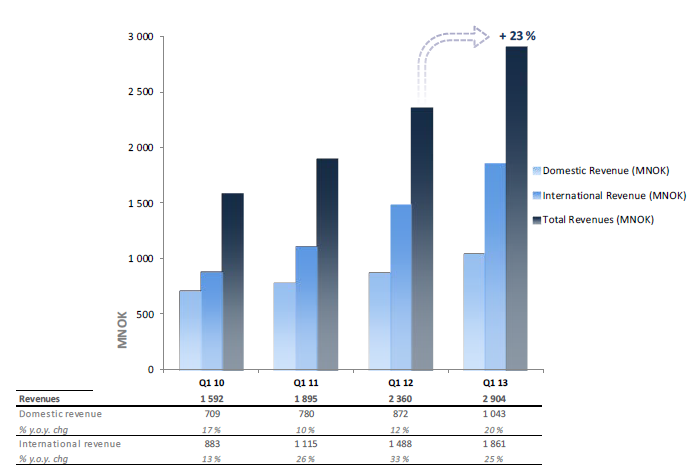 Aiming for the 'comfort zone' on unit costs

In the major cost categories, fuel costs increased by only 12%, below the capacity (ASK) increase of 21% due to a 3% fall in the NOK price, a more efficient fleet of 737-800W aircraft (and the reduction in 737-300s) and hedging gains. Labour costs increased by 22%, slower than the 31% increase in man-labour years and revenue growth, but 1% ahead of the increase in ASKs.

Unit costs were helped by an 11% increase in average sector length. Norwegian reports unit costs on the basis of cost to the EBITDA level and excluding unrealised gains and losses on hedging instruments.

On this basis, unit costs fell 8% and ex fuel unit costs also fell 8%. This represents good progress, although it is significantly driven by longer sector lengths, which increase ASKs and lower the cost per ASK of many fixed and semi-fixed cost items. Norwegian aims to continue cost reduction and targets a fall of around 10% for FY2013 in order to move into what it calls the “comfort zone” of unit costs. 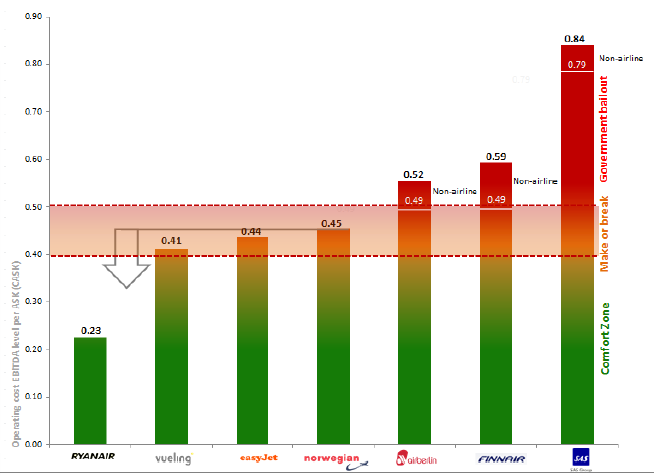 In international markets, the company is growing its use of outsourcing and off-shoring in order to adapt its cost base, in particular labour costs. It is optimising its crew and aircraft rostering, thereby improving aircraft utilisation rates and increasing average sector length to grow ASKs and reduce the cost per ASK of frequency-based costs. Finally, it is increasing the level of automation in its systems, from booking to check-in to operating systems. 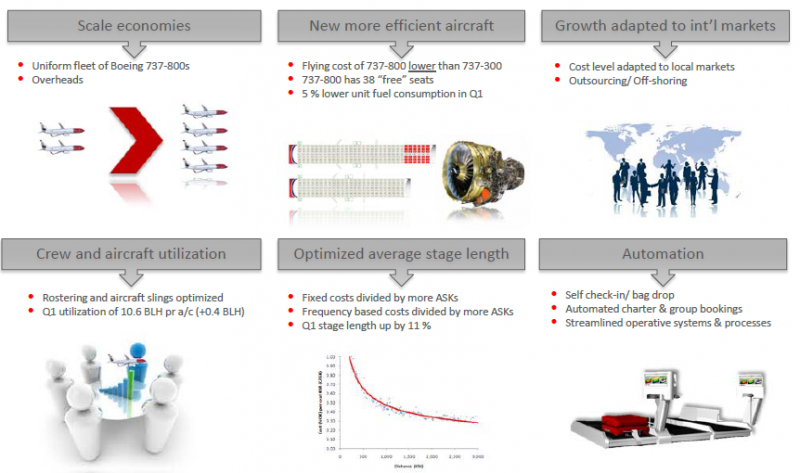 This month sees the opening of Norwegian’s base at London Gatwick, its first base in a major non-Nordic capital city, with 14 routes announced to date and three aircraft, rising to four by the end of the year. It is also opening a new base at Alicante in Spain to add to existing bases in Malaga and Las Palmas. Perhaps more radically, Norwegian plans to open its first non-European base, a long-haul crew base in Bangkok.

These developments are significant not only from a traffic and routes point of view, but also as a signal that Norwegian understands the need for lower labour costs. Its labour productivity levels are very good compared with other European carriers in terms of ATK per employee, but when it comes to employee cost per ATK, its labour cost productivity is only middling as it is let down by very high wage rates.

The base in Bangkok should allow much lower labour costs on its routes to the Thai capital. In Europe, Alicante and even London Gatwick should be lower wage bases than Norwegian’s Oslo base.

New long-haul routes at the expense of frequency, and beware of Emirates

Norwegian announced in Apr-2013 that Oslo to Fort Lauderdale, Florida will be added to its small, but growing, list of long-haul routes from 30-Nov-2013. It will operate the route twice weekly from Oslo Gardemoen airport, adding to its previously announced Fort Lauderdale services from Copenhagen and Stockholm.

The carrier has also previously announced New York JFK and Bangkok services. The company says that demand for tickets on its long-haul network is currently exceeding its expectations.

Norwegian plans to operate its long-haul route with Boeing 787-8 equipment, the first three of which had been slated to be delivered in April, June and November. In Mar-2013, Norwegian signed an agreement to lease two Airbus A340-300s for flights to New York and Bangkok in order to cover the period for which the Boeing 787 Dreamliner is delayed.

Norwegian now offers 10 routes to destinations outside Europe. Seven of these are widebody routes, while its winter-only flights to Dubai from the three Scandinavian capital cities are flown with its 737-800 fleet (some of the longest 737 routes in the world).

Norwegian’s Dubai network suffered a competitive blow on 11-Apr-2013, when Emirates announced plans to launch a daily Dubai to Stockholm service from 4-Sep-2013, using Boeing 777-300 aircraft. Norwegian’s three times weekly service in the winter is clearly aimed at the winter sun leisure market, but it may look sub-critical mass compared with Emirates. In addition, Qatar Airways operates a daily service from Stockholm to Doha.

Norwegian’s routes to destinations outside Europe

When will Norwegian’s long-haul network be profitable?

This targeting of leisure traffic is not surprising given the airline’s positioning as a low-cost carrier and comments by CEO Bjorn Kjos reported in The Financial Times (1-Apr-2013): “I think in the future the big rise will be in the leisure market. Eighty-five per cent of the market is leisure. In 15 or 20 years, that will be 95 per cent.”

It seems that Norwegian’s strategy on long-haul will be to continue to add routes rather than frequencies. Mr Kjos has been reported as saying that the airline will look to operate long-haul services from smaller cities such as Bergen, Budapest and Hamburg in the future (tic.travel, 08-Apr-2013).

The carrier has eight Boeing 787 aircraft on order for its long-haul network and is likely to order more. There have been reports that it may order the 787-9 at some point this year.

Mr Kjos expects the long-haul network to be profitable once it has up to 19 scheduled long-haul services and more than 15 long-haul aircraft. A key challenge for management will be to balance the need to expand the route network with the need for critical mass at destinations in order to establish bases and gain cost efficiencies in crew and aircraft operations.

Under the existing delivery plan, the eight 787s currently on order will be in the fleet by the end of 2015. Judging by Mr Kjos’ comments, the achievement of widebody network profitability may be one for the long-haul.