Finnair, SAS and Norwegian, The Nordic Three: is consolidation on the way?

The spotlight in Europe is currently on the Nordic Three: Finnair released 2012 results on 08-Feb-2013 and this Friday will see the publication of SAS’ annual report and Norwegian’s 2012 results.

The region – Finland, Sweden, Norway and Denmark – is the only corner of Europe to be home to three significant airline groups that are all independent of the three major flag carrier groups in terms of their ownership.

For Finnair and SAS, this is largely due to government-held controlling stakes, while Norwegian has always been independent. With growing competition from outside the region, especially from low-cost carriers, this situation may change and the region appears ripe for consolidation.

Market shares in the Nordic region

Of the four countries, Norway is the biggest in terms of total seat capacity, followed by Sweden, Denmark and Finland.

Finland is the only one of the four countries where the flag carrier still has a majority market share, with 59% of seats.

Denmark is the most fragmented, with 33% of the market divided between airlines with less than 5% each. 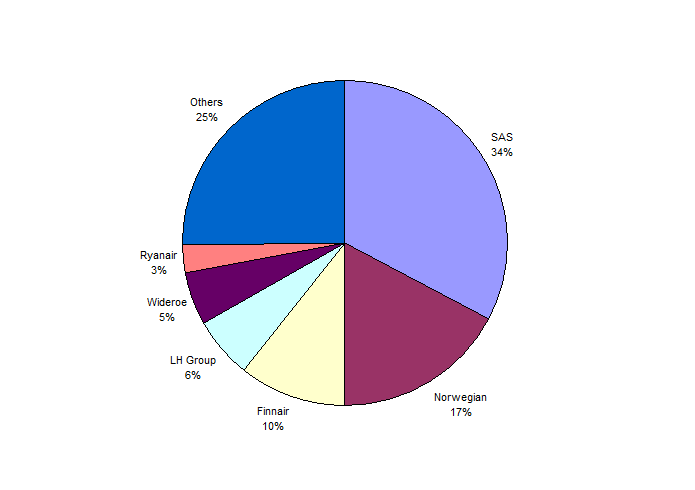 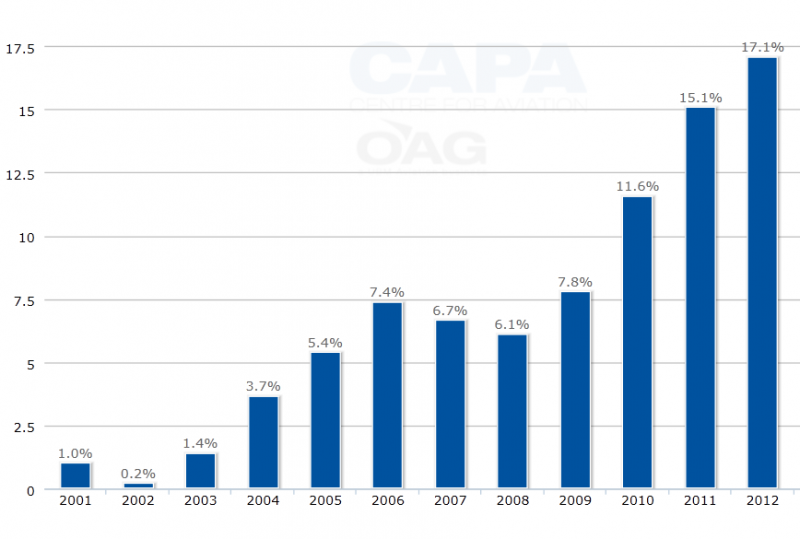 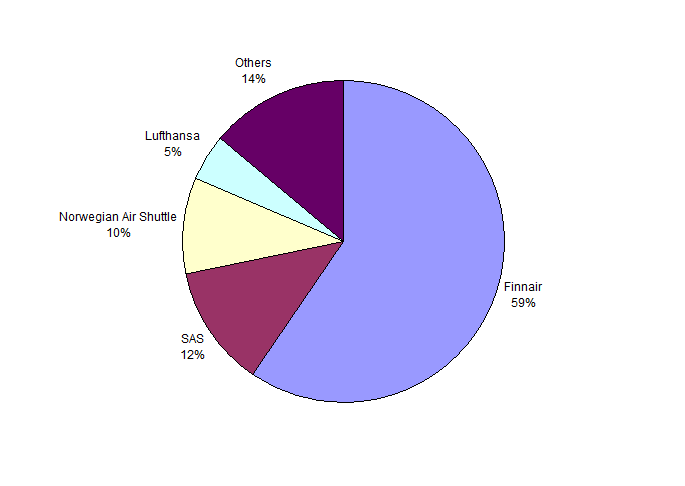 But Sweden's market is much more strongly low-cost, with Norwegian and Ryanair occupying 24% between them. SAS holds about a third of the market in each of the Scandinavian markets, with a larger share in Denmark. 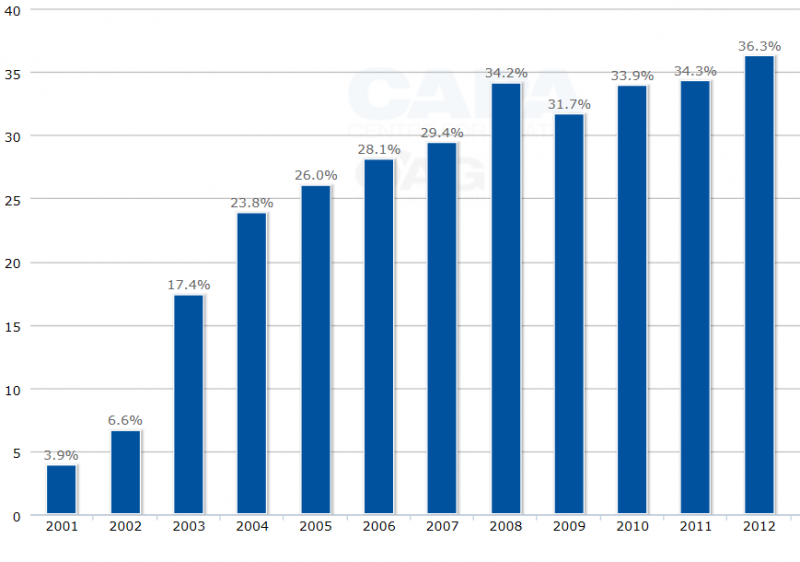 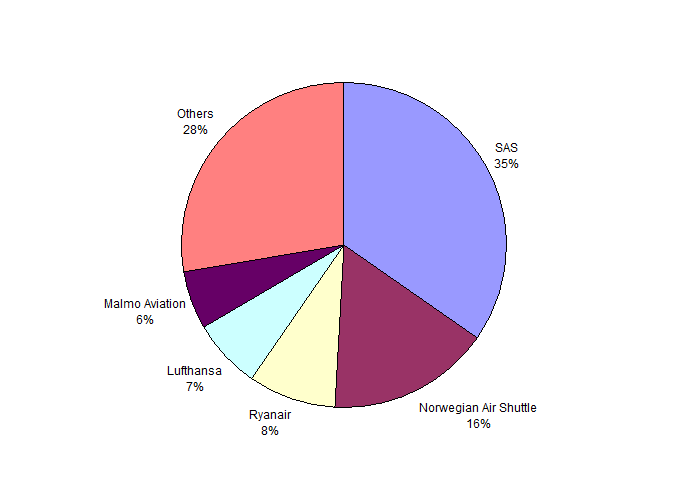 Norway meanwhile understandably sees a larger presence from Norwegian (31%), with Widerøe and Ryanair accounting for another 18% between them. 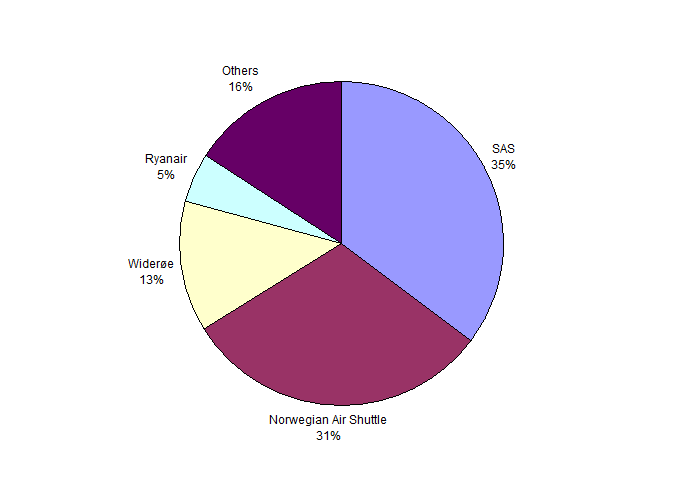 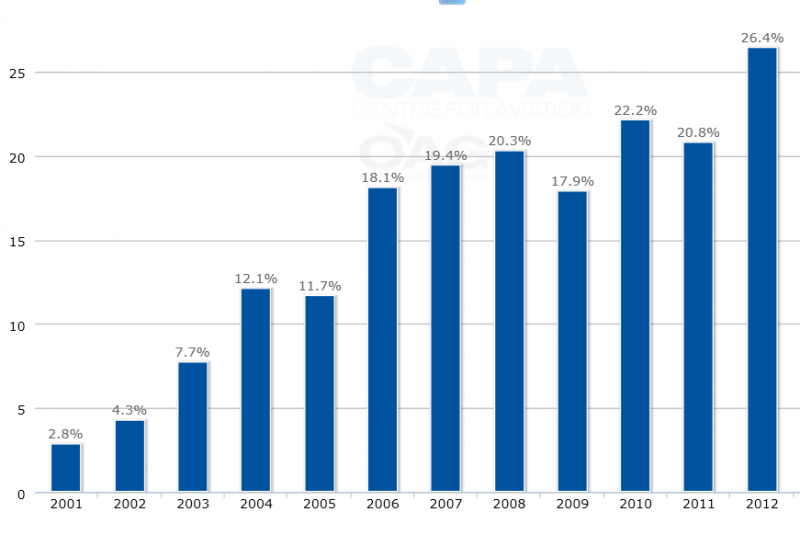 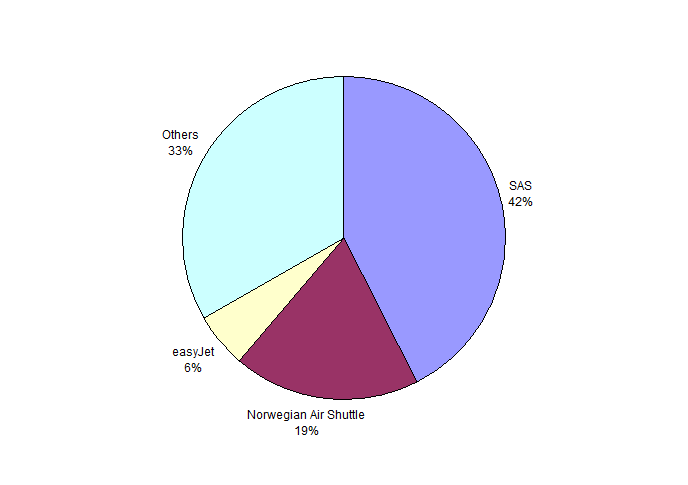 Finnair returned to profit in 2012, SAS back to loss, but Norwegian is still the profit leader

Finnair’s 2012 results saw a return to profit after net losses in each year since 2008 as revenue growth of 8.5% outstripped operating cost growth of 3.7%. 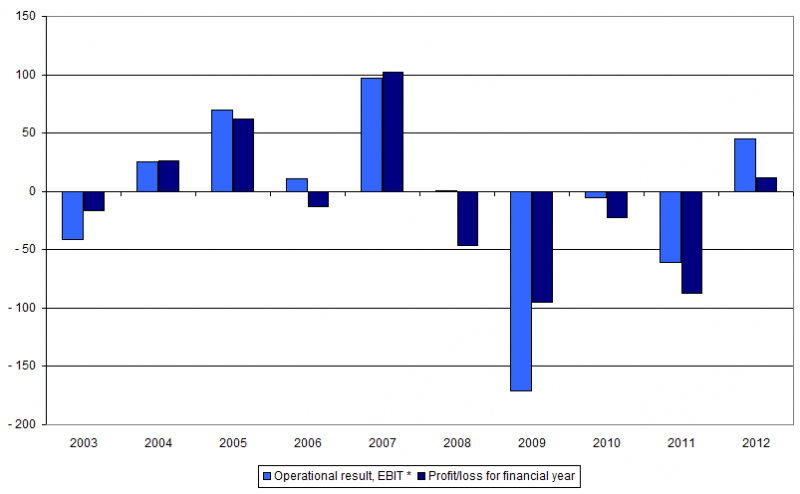 Finnair has done a fairly good job in containing unit costs (particularly ex fuel unit costs) in recent years, but the growth in unit revenues has been the main driver of its profit recovery. 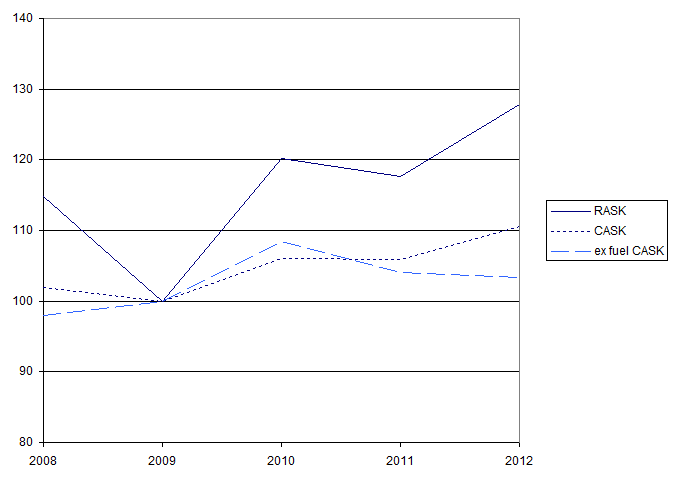 SAS slipped back into losses again at the operating level in 2012 (result for the 10 month period to October, following a change of year end). It has done a good job in lowering unit costs since 2009, but unit revenues have also fallen sharply over this period. However, its unit costs started from a very high point and remain higher than either Finnair’s or Norwegian’s (even taking account of stage length). 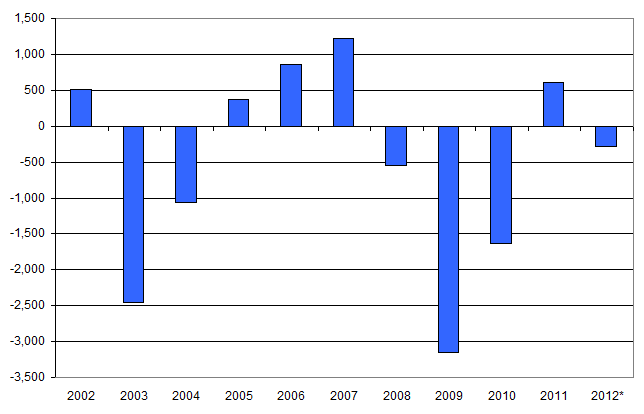 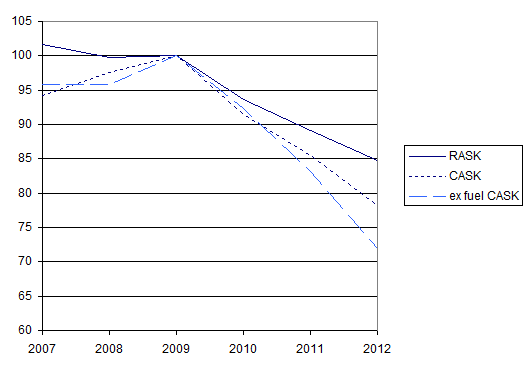 Norwegian has been the most consistently profitable of the three Nordic players, even recording its highest operating profit margin in 2009, when both of the others saw heavy losses. It saw an increase in unit costs in 2012 (first nine months), but a faster increase in unit revenues. It will be interesting to note whether these trends have continued for the full year 2012 when Norwegian reports annual results on 15-Feb-2013.

Analysts' consensus forecast is for an 8% increase in operating profit to NOK451 million, with a small decline in operating margin from 3.9% to 3.5%, suggesting that Norwegian may be struggling to generate sufficient RASK growth to cover increases in CASK. 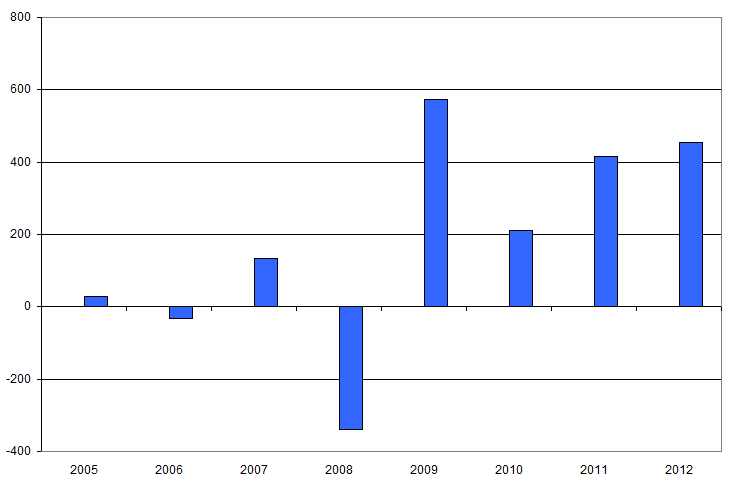 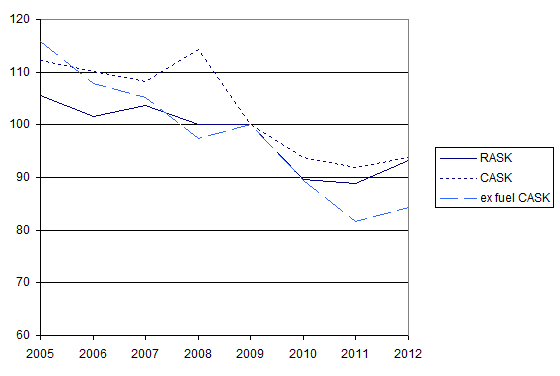 Ryanair is the benchmark on unit costs

The chart below shows unit costs (cost per ASK), both with and without fuel, against the average stage length for each of the three Nordic carriers in 2010, 2011 and 2012. It also shows Ryanair's unit cost plot for 2012, by way of comparison.

SAS is moving in the right direction but is still a long way above the unit cost curve line of best fit. Norwegian is the clear cost leader in the Nordic region, but Ryanair has a very significant cost advantage over all three. 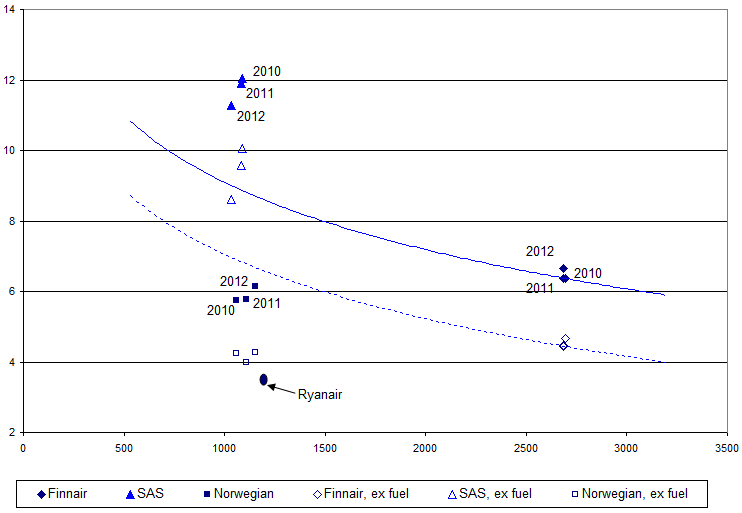 Norwegian is showing the way, but still has questions to answer, while SAS remains worryingly high cost

Norwegian Air Shuttle is the strongest positioned of the three main Nordic carriers, with the lowest unit cost and originating in the biggest country market in terms of overall seat capacity.

Nevertheless, its unit costs are higher than those of Ryanair, which may make it difficult for it to challenge Europe’s leading LCC if it goes through with ambitious plans to establish elsewhere in the continent, and it must take action to halt the recent increase in CASK. Whether the Nordic region is a sufficiently large market to sustain the large aircraft orders that Norwegian has placed remains to be seen, but it must be betting on the demise of one or other of SAS and/or Finnair, as it prepares to start long-haul operations.

Finnair operates in a focused niche, connecting Europe’s secondary cities with Asia and its unit costs are not out of sync with what is typical in Europe. Nevertheless, it needs feed for its long-haul network and its cost base remains high compared with Norwegian and the main European LCCs, making this feed vulnerable to price-based competition.

SAS has attacked its cost base as aggressively as it could in recent years, with some success – unit costs have fallen 22% since 2009 – but it remains a relatively high cost carrier and it no longer enjoys strong market shares in any of its three home countries. Its unit revenues have also fallen in recent years, when they have been growing for most competitors, and this slide may be difficult to reverse.

Recent – perhaps surprising – strength in yields has helped all three to maintain a reasonable outlook, but there is a distinct flavour of merger in the air. If it were another business than airlines, the financial advisers would be circling eagerly.