Norwegian Air Shuttle: strong growth in 2Q2013 profits, but the challenges are only just beginning

Announcing 2Q2013 net profits that were more than twice those of the same period last year, Norwegian Air Shuttle’s CEO Bjørn Kjos said: “This has been a very good quarter for Norwegian. We have finally started our long-haul flights and we have opened a new base in London”.

Unit costs fell faster than unit revenues and both will continue to fall as average sector lengths grow.

The challenge for Norwegian will be to retain some pricing power as rapid seat growth continues, thereby maintaining this balance between unit revenues and unit costs. This may not be easy given the price sensitivity of the European short/medium-haul market and the superior route networks of major long-haul competitors.

Net debt was broadly level on a year ago (+2%) at NOK2.8 billion (EUR353 million), while cash and cash equivalents increased by more than NOK1.3 billion to reach NOK2.9 billion (EUR366 million). 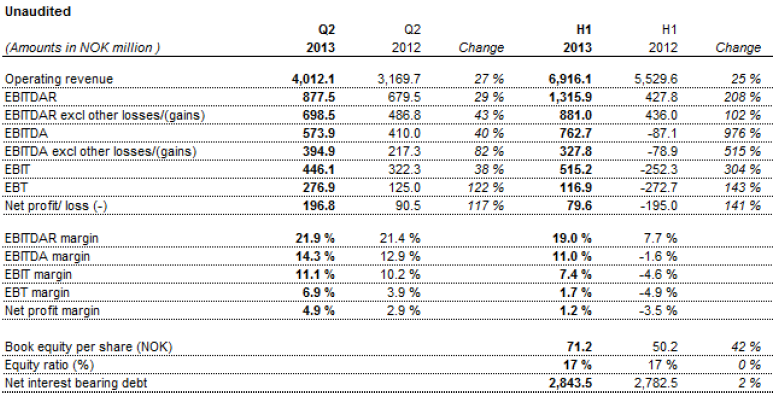 ASKs were up 34%, with strong passenger growth and longer sectors

The increase in average sector length was the result both of longer routes on the European network and of the introduction of long-haul routes in the quarter. This contributed to a 6% fall in unit revenues (RASK), but unit costs fell faster at 9%. RASK performance on the different parts of the network is not reported.

Load factor has plateaued and is lower than industry standards

Norwegian’s strong capacity growth in 2Q2013 represents the continuation of a long term trend that has seen growth at a compound average rate of 34% per annum since 2Q2004. Although load factor increased by 1 ppt, it is below its second quarter peak level of 79% achieved in 2006 and 2007. Its half year load factor of 77%, flat on last year, is less than the 79% reported for members of the Association of European Airlines and the 80% plus levels seen by the leading LCCs.

This is an area for improvement for Norwegian. 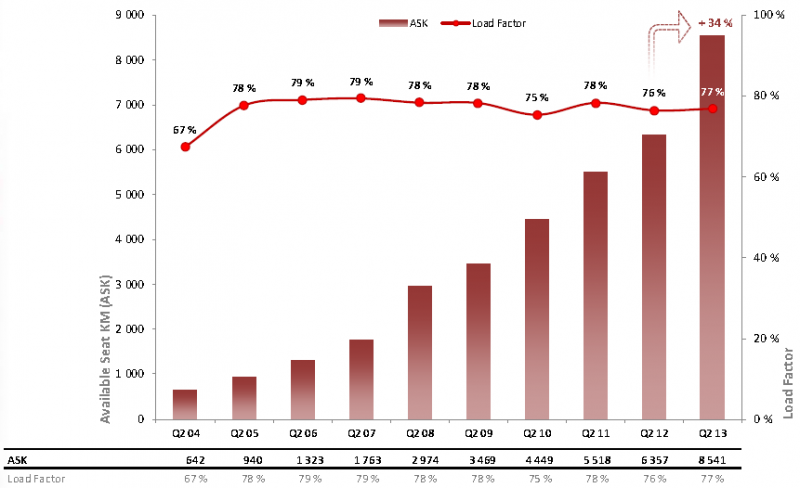 Norwegian continued to grow passenger numbers and market share at all of its main bases in 2Q2013. At its home base of Oslo, it reversed the fall in market share seen in 2Q2012 to reach its highest ever second quarter level of 38% in 2Q2013.

At Stockholm, Copenhagen, Helsinki, London Gatwick and in Spain (Malaga, Palma and Alicante), its share continues to grow consistently. At its new Gatwick base, load factor reached 85% on newly launched Mediterranean routes. 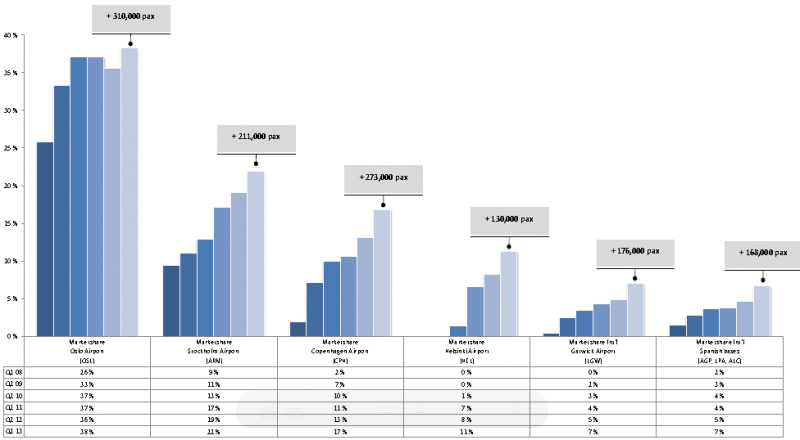 Ancillary revenues were 11% of the total vs 15% target

Revenue growth of 27% in 2Q2013 was more or less equally driven by growth in passenger and ancillary revenues. Ancillary revenues were 11% of the total, compared with Norwegian’s target of 15%. 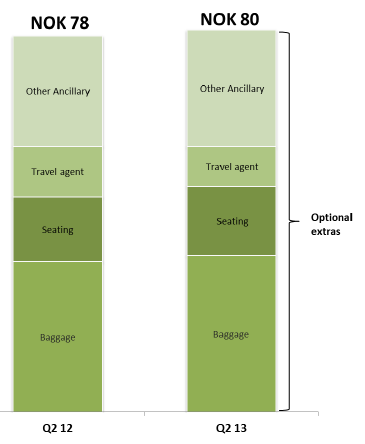 Geographically, most of the growth came from international revenues, which grew by 31%, while domestic revenues grew by 17%. There was a similar pattern for the half year.

Operating costs were up 25%, while revenues grew 27%

Fuel, the biggest cost item accounting for 32% of total costs, grew by 20%. This was less than the growth in capacity, helped by a 9% fall in the realised fuel price in NOK and the impact of higher sector length.

Labour costs (18% of total costs) grew by 30%, which was above the 28% increase in average full time equivalent headcount, due to salary increases, but still less than capacity growth. In a sign that good labour relations cannot be taken for granted, Norwegian lost a pension dispute with its pilots in Jun-2013 at the Norwegian Labour Court, which ordered it to restore the pilots’ performance plan.

Growing confidence over unit cost reduction, but this is largely mechanistic

Norwegian has lowered its longer term ex fuel CASK objective from NOK0.30 to NOK0.25, but does not specify the year by which it intends to reach this. Its ex fuel CASK was NOK0.31 in 2012. One of the difficulties in assessing Norwegian’s unit cost progress is that CASK reduces mechanistically as average sector length grows (as does RASK).

The trick is to try to ensure that RASK falls at a slower pace than CASK. The small, but growing proportion of long-haul capacity in Norwegian’s total ASKs will lower CASK regardless of any underlying cost efficiency measures. 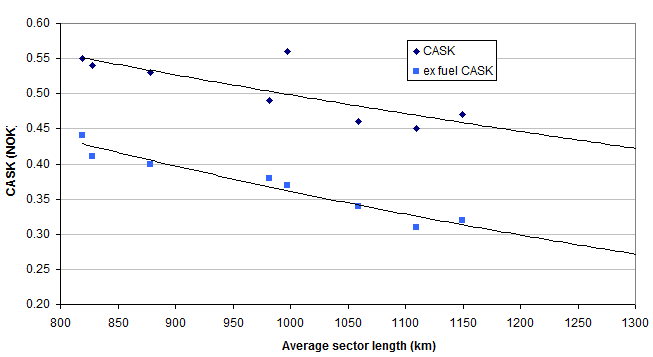 It is possible that like-for-like CASK (in other words, unit costs on each part of the network) could be increasing, but overall reported CASK still decreases due to the increased average sector length. It would serve greater analytical transparency if Norwegian were to disclose separate traffic and revenue data for the long-haul and the short/medium-haul parts of its network.

Norwegian says that its new long-haul operations (the first route, to Bangkok, launched on 30-May-2013) is performing ahead of expectations, with a load factor of 96%. Its 2Q2013 earnings were lowered by NOK60 million (EUR7.6 million) due to long-haul start-up costs related to A340 wet-leases (as a result of 787 delivery delays), low utilisation and staff training and NOK10 million lower revenue due to smaller aircraft (A340 versus 787) and price stimulation.

The carrier's first Boeing 787 (delivered on 30-Jun-2013) will commence operating on long-haul routes from mid-August, after flying in the European network in July, and the second from Sep-2013. It has deployed its first 787, leased from ILFC, on a one-off basis on routes from Oslo including Alicante and Malaga.

It expects the long-haul operation to achieve an efficient scale in 2014, but to be cash-positive from 2013. According to Norwegian’s projections, long-haul should grow to account for 4% of departures, 8% of passenger and 46% of ASKs in 2015, when the long-haul fleet will rise to eight aircraft.

Norwegian’s long-haul CASK target is NOK0.30-0.35 by 2015/2016, with a significant reduction from 2Q2013 to 3Q2013. Part of its strategy to lower long-haul unit costs is to base aircraft and crew locally in its long-haul destinations and a US base is now planned, in addition to a Bangkok base. It is also likely that it plans to add longer sectors in order to lower CASK. 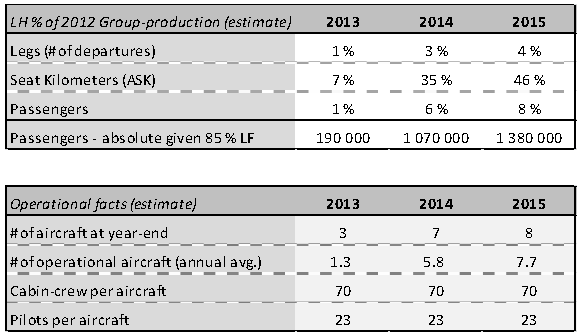 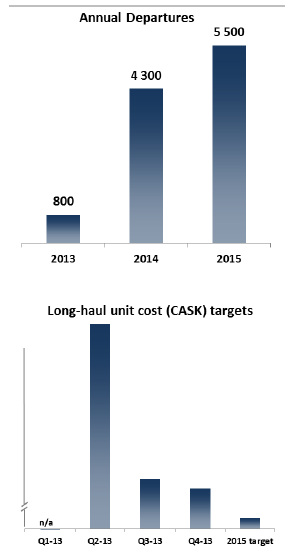 In previous reports, CAPA has highlighted some of the challenges Norwegian might face in managing its long-haul expansion

While it is very early days, it seems that Norwegian has already experienced some teething problems in adapting its low-cost model to long-haul flying.

After receiving criticism of its policy requiring passengers to pay for water on board, it now plans to offer free water on long-haul (The Local/Air Journal, 21-Jun-2013). Some of the airline’s long-haul passengers were reportedly refused water, food and blankets after only having cash or the wrong credit cards with them.

It will now also accept cash payments on board long-haul services, but will still only accept credit cards on short/medium-haul services. Although a relatively minor matter, it illustrates the difference in service levels expected by long-haul passengers and the challenges in preventing unnecessary cost and complexity from permeating the business model. But these teething problems are small by many standards.

Cargo is a further example of how long-haul provides additional challenges and pushes the business model in new directions. Norwegian has appointed Kales Airline Services as its cargo GSA in Scandinavia, Heavyweight Express in the US and WorldWide GSA in Thailand. This requires new skills in terms of the management of both operations and commercial relationships.

For FY2013, Norwegian plans an increase in ASK capacity of “in excess of 30%”, higher than the previously planned “in excess of 25%”. This will come from 14 additional 737-800s joining the fleet this year, increased short-haul utilisation and distances driven by the Gatwick and Spanish bases and the launch of long-haul operations. It plans to add a new base in Tenerife in the winter and is also reportedly talking to AENA about opening bases at Madrid and Barcelona in spring 2014 (El Confidencial, 12-Jun-2013).

Norwegian says that advance bookings have been “satisfactory” entering 3Q2013, but it also expects “continued competitive pressure” in Europe and it may adjust its capacity plans to optimise route portfolio dependent on economic and market conditions. Long-haul demand has “exceeded expectations” and capacity will grow in line with the introduction of aircraft.

Given the strong earnings performance in 1H2013 and Norwegian’s confidence on its FY2013 CASK targets, it seems likely that it will achieve strong growth in profits for the full year, provided that RASK declines are contained.

This positive outlook for the year was reflected in an 11% increase in the share price on the day of the 2Q2013 results announcement (11-Jul-2013). Nevertheless, the future – involving the continued rapid expansion of the European network (Norwegian has more than 260 narrowbodies on order), while managing a new venture into long-haul – does not come without risks. So far, so good.