Moscow's and the Russian Federation's second largest airport, Domodedovo (DME), handled 30.7 million passengers in 2017. Although it returned to growth last year, this figure was virtually unchanged from 2013. Traffic fell again in 1H2018, in spite of a boost from the FIFA World Cup held in Russia this summer.

DME ranked as Europe's 13th biggest airport by passenger numbers in 2017. It is mainly a point-to-point airport, although 17.8% of passengers were transfer traffic last year. Terminal developments to expand and integrate terminals 1 and 2 are aimed in part at improving the handling of transfer traffic at an airport that is dominated by domestic and short/medium haul international flights.

Together with new runway capacity, they are also aimed at ensuring that DME is positioned for more consistent growth in the future.

Domodedovo returned to growth in 2017, after two years of falling traffic

The airport's former number two airline, Transaero Airlines, ceased operations in Oct-2015. This resulted in falling traffic in both 2015 and 2016, in spite of capacity growth by the airport's leading airline, S7 Airlines, and number two, Ural Airlines.

The airport also suffered from the bankruptcy of VIM Airlines, which ceased operating in Oct-2017, but this carrier had only a small presence and this did not prevent DME's return to growth last year.

The underlying trend of falling traffic at DME in 2018 reflects a drop in demand on domestic and CIS routes, whereas international demand to/from countries outside the CIS is growing. Traffic to/from Turkey has been particularly strong, led by leisure traffic.

The regional airline RusLine moved from DME to Vnukovo in Mar-2018, helping to explain the fall in domestic and overall traffic in 2018 (the exit of VIM Airlines in Oct-2017 is also affecting this year's traffic growth rate). 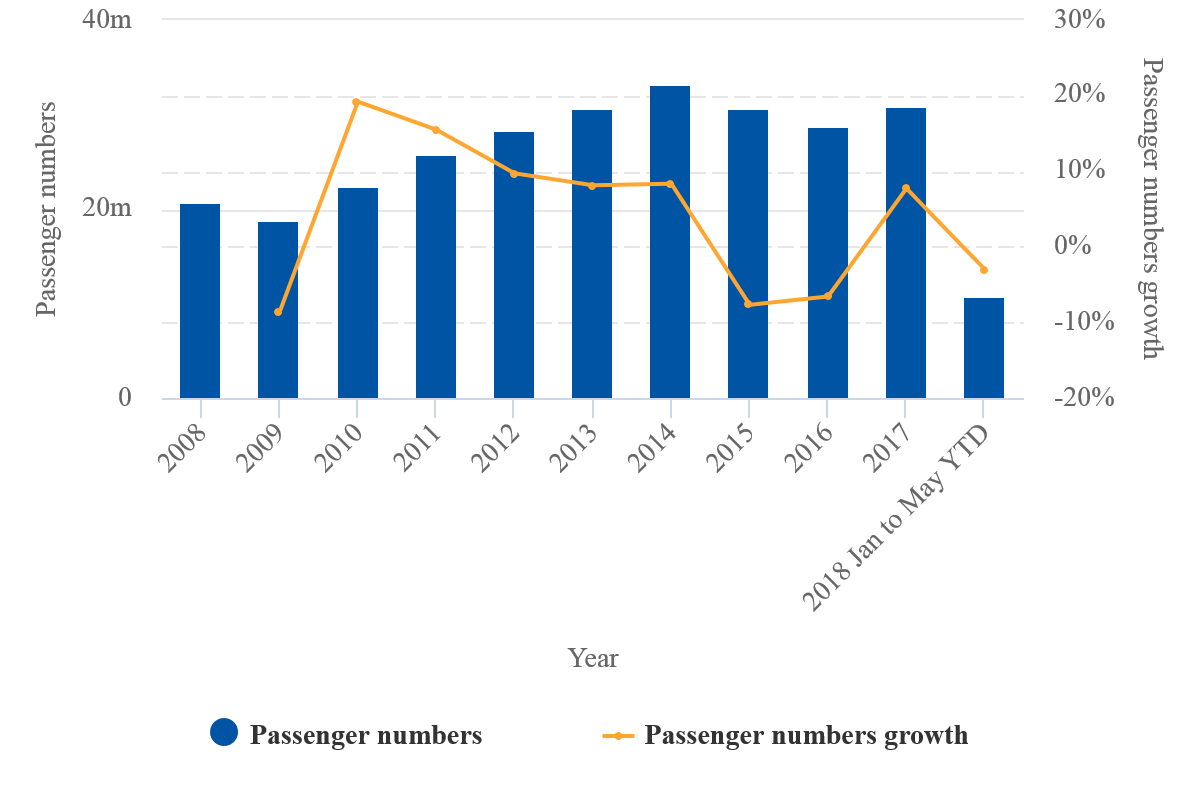 Russian operators dominate, with 78.1% of seat capacity at DME. S7 Airlines is the biggest operator by seats at the airport, with 44.0% of seats in the week of 13-Aug-2018, according to data from OAG. DME is also S7's biggest hub by seats. 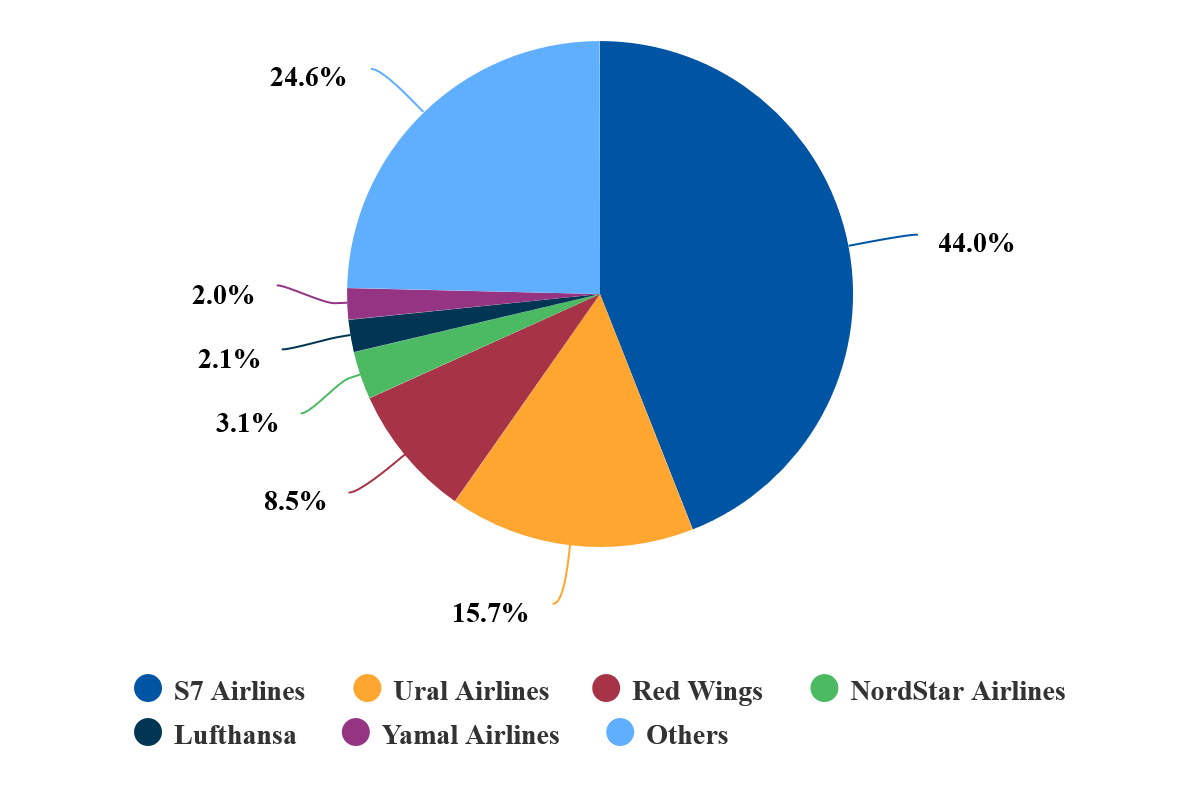 LCCs have only 1% of seats

LCCs have only 1.1% of seats at DME, with only two operators: Pegasus and Vueling. Vueling has reduced its presence at DME – since its peak summer capacity reached more than 6,000 weekly seats in 2014 – to less than 1,300 in summer 2018.

Domestic traffic made up 55% of passengers in 2017

The dominance of Russian airlines at DME reflects the importance of the domestic market.

Exactly half of the airport's seat capacity in the week of 13-Aug-2018 is domestic (source: OAG), but this period is near the height of the summer, when international capacity is seasonally high. DME's 2017 annual passenger numbers were split 55% in favour of domestic traffic.

International demand has been adversely affected in recent years by the weakening of the rouble and by economic weakness, partly resulting from sanctions against Russia. This has switched the balance of its traffic from international to domestic routes, although traffic data for 2018 so far indicate that this balance may be starting to tilt back this year.

Together with North Africa (0.9%), these short/medium haul regions account for 95.8% of international seats from DME.

The leading destination market by country is Ukraine, followed by Germany (helping to explain Lufthansa's position as the leading foreign airline). The top 10 countries also include Uzbekistan, Bulgaria, Turkey, Montenegro and Belarus, in addition to the UAE and Western Europe's Spain and Italy. 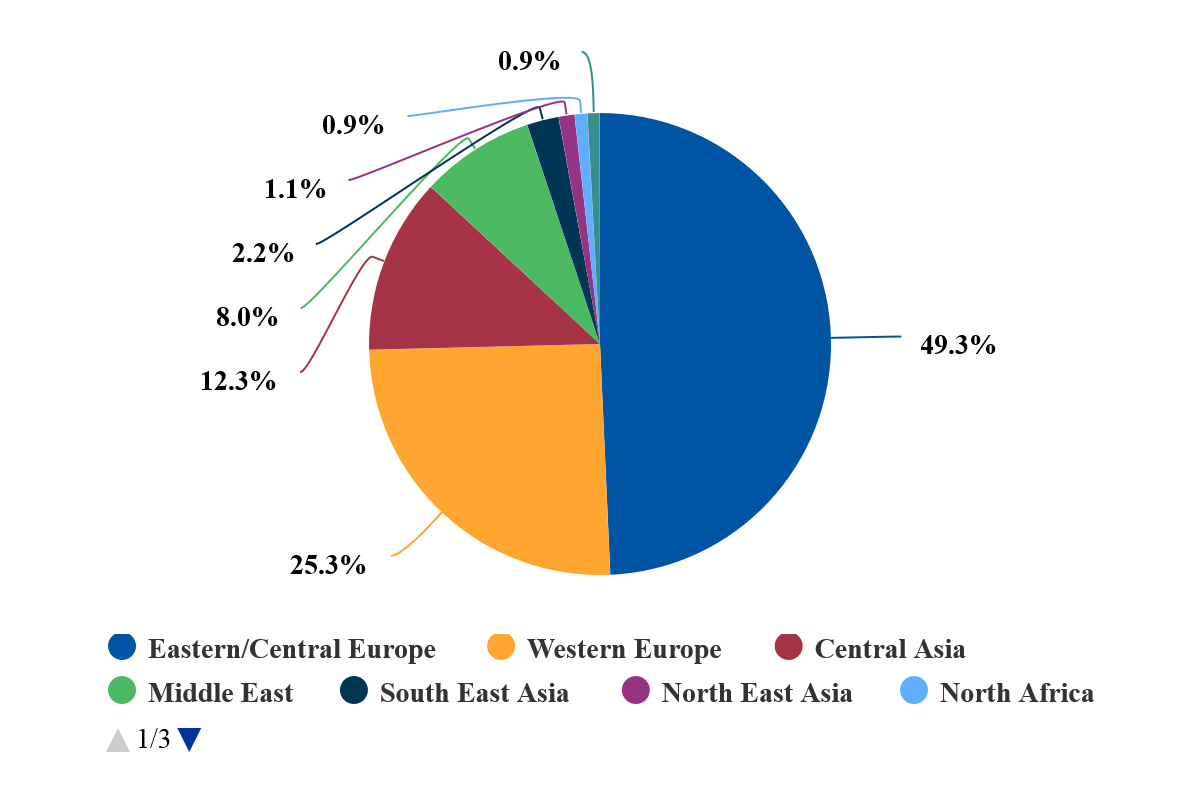 All three big Gulf airlines are present at DME

Only 4.2% of DME's international departing capacity is on long haul routes (2.2% to South East Asia, 1.1% to North East Asia and 0.9% to the Caribbean). Its larger Moscow airport rival, Sheremetyevo, has far more long haul connections, particularly to Asia and North America.

Nevertheless, the presence of all three of the big Gulf carriers gives DME indirect, one-stop, connections to a large number of destinations in Asia Pacific and Africa.

OAG data into the early part of 2019 indicate a further increase to more than 8,800 weekly seats. Emirates codeshares with S7 on domestic Russian routes.

Qatar Airways, number two by seats between DME and the Middle East, has increased its weekly capacity from approximately 2,000 seats in 2016 to more than 4,300 in 2018. Passenger numbers on the Doha route grew by 47% year-on-year in 1H2018.

Etihad is much smaller, with only 1,000 weekly seats.

DME opened new facilities at its Terminal 2 in time for the FIFA World Cup this summer, adding capacity for an additional five million annual passengers.

DME may have suffered from falling between two stools, since it is neither a major hub with long haul connections like Sheremetyevo (the main hub for Aeroflot) nor a smaller but fast growing LCC base like Vnukovo (home to Russia's only LCC, the Aeroflot subsidiary Pobeda).

Nevertheless, Moscow is the capital of Europe's most populous country and has plenty of scope to support three main airports. The Russian economy and air traffic have been volatile in recent years, but aviation remains a long term growth industry. DME's infrastructure expansion positions it for future growth.