Chile’s domestic passenger market grew by 16% in 1H2013, making it once again one of the fastest growing in Latin America. Chile’s domestic market has now nearly doubled in size since 2009 with annual growth of nearly 20% in 2010 to 2012.

LATAM Airlines Group subsidiary LAN continues to dominate Chile’s domestic market, accounting for 75% of the 4.6 million total domestic passengers in Chile during 1H2013. LAN’s domination of the market is scaring away potential new entrants, including LCC groups such as Viva.

Chile and Russia are now the only top 25 domestic markets in the world that are not served by a single LCC. Russia is expected to see a return of LCC activity within the next year, leaving Chile alone on this undistinguished list.

Chile’s domestic growth continues to impress despite lacking a LCC

Chile’s domestic growth is rather remarkable given the market is not yet served by any low-cost carriers. Besides LAN the market is served by four smaller carriers, only one of which is of significant size – Sky Airline.

Two similarly sized domestic markets, South Africa and Vietnam, both are now served with two LCCs while two others, Saudi Arabia and Norway, are served by one LCC.

VivaChile is a no go – at least for now

The LCC group Viva had been looking at selecting Chile as the base for its third affiliate after Mexico and Colombia, where VivaMexico and VivaColombia operate almost entirely in those two countries' domestic markets. But Viva, which is partially backed by Declan Ryan’s investment firm Irelandia Aviation, has ruled out the Chilean market and is instead now focusing on Peru.

Viva likely concluded that competing against powerful LAN in its original home market poses too big a challenge. LAN also has a domestic operation in Peru but it entered the Peruvian market much later and it has a 62% share in Peru compared to 75% in Chile. Three carriers have had some success at competing against LAN on the main domestic routes in Peru while in Chile domestic competitors have been unable to achieve sustainable load factors.

LAN would almost certainly respond to a new entrant in Chile by reducing fares, which would put Viva in a difficult position as LAN has the capacity and cash to outmuscle any new competitor. It already has a second brand in the Chilean domestic market, LAN Express, which has a lower cost structure and could be used to fend off any new LCC or any other kind of new entrant.

The LAN Group launched LAN Express in 2001, initially using the new lower-cost brand to take over flights that had been operated by Ladeco, which had been a full-service competitor that LAN acquired in 1995. LAN for several years used LAN Express as the growth vehicle for its domestic business. In 2008, LAN Express transported over 90% of the group’s domestic passengers in Chile. But over the last four years, the group has been focusing most of the growth at the main LAN brand as Chile’s market has expanded rapidly.

As a group LAN’s domestic traffic increased by 14% to just under 3.5 million passengers. The group’s share of Chile’s domestic market, however, slipped from 76.5% to 75.0% as the overall market grew at a slightly faster clip. (The 75% includes a 44% share for the LAN Express brand and a 31% share for LAN Airlines.) 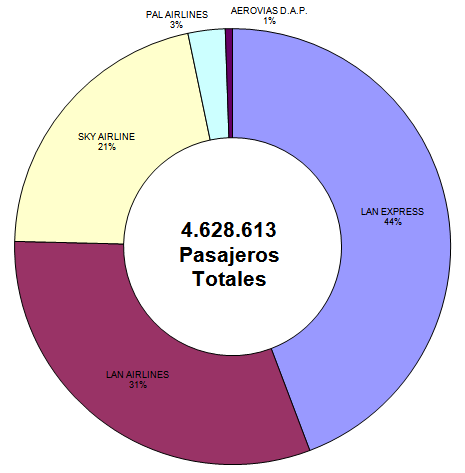 LAN is confident that it can continue to grow rapidly in the Chilean domestic market as it sees its fares as low enough to successfully stimulate demand among Chile’s large middle class population. The carrier has said it expects Chile’s domestic market to grow by 15% to 20% for the full year in 2013.

Sky continues to grow faster than LAN but faces challenges 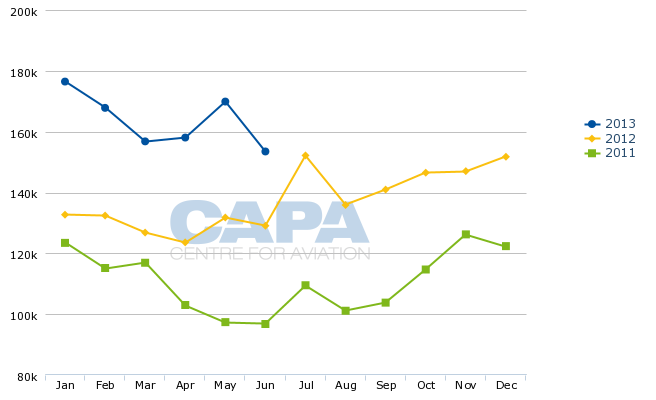 Sky has built up a network which rivals LAN, serving 13 domestic destinations compared to 15 for LAN, according to Innovata data. The carrier also has worked to improve its product in recent years as it has renewed its fleet. According to the CAPA Fleet Database, Sky added five A319s in 1H2013, giving it a fleet of 11 A319s and five A320s. The carrier began modernising its fleet with A320 family aircraft in 2010 and is now in the process of phasing out its remaining 737-200s.

LAN’s load factor was also down 4.8ppts in 1H2013, an indication of over-ambitious expansion by both of the main players and of a market that despite the overall robust passenger growth may be suffering from over-capacity. But LAN’s load factor remained relatively healthy at 74.9% (includes 75.5% at LAN Express and 74.3% at LAN Airlines) and a huge 13.6ppts above Sky.

Sky could struggle to survive as an independent airline

While Sky has emerged as a formidable competitor to LAN, its low load factors, small size and lack of affiliation with a Latin American airline group makes it vulnerable. Ultimately Sky, which launched services in 2001, could struggle to maintain its independence and would benefit from joining forces with a larger group.

Sky would be a logical acquisition target for the Avianca Group, which already codeshares with Sky. The Avianca brand now includes carriers in four other South American markets, leaving Chile an obvious white spot in its portfolio, particularly given the recent growth of the Chilean market.

Another option would be for Sky to transition to the LCC model and join one of Latin America’s LCC groups, such as Azul, Gol or Viva. Joining a LCC or FSC group would help Sky grow further domestically and particularly internationally as it would be able to leverage network synergies.

The third competitor on domestic trunk routes in Chile, PAL Airlines, would also be a potential candidate for a LCC transition. But PAL has struggled over the last two years and has seen its already very small share of the domestic market shrink even further. 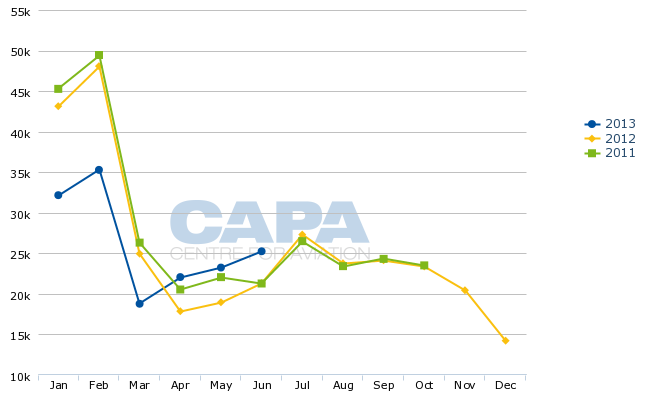 PAL currently serves only six domestic destinations. Santiago-Calama is its largest route with 53,000 passengers transported in 1H2013. It is also the biggest route for LAN Airlines and Sky with 366,000 and 130,000 passengers respectively in 1H2013.

PAL initially launched in 2003 as a charter carrier. In addition to expanding into the scheduled domestic market in 2009 it operated a limited number of international services until 2012. PAL has talked up the possibility of again operating scheduled international services but will have to overcome even bigger challenges than Sky given its small size and independent status.

Unlike Sky, PAL has not yet started to modernise its fleet and continues to operate Boeing 737-200s and -300s on domestic trunk routes. Its 737 fleet has an average age of 25 years, according to the CAPA Fleet Database.

An even smaller Chilean carrier, Aerovias DAP, increased its passenger traffic in 1H2013 by over 60% but from a very small base. Aerovias operates small turboprop aircraft on regional routes in Chile’s southern Patagonian region. It transported about 25,000 passengers in 1H2013, giving it only a 0.5% share of Chile’s domestic market.

New entrants in Chile have a mountain to climb

Chile’s domestic market did see a new entrant in 2012 when Aerolineas Damojh launched services on some trunk routes using a single 737-200. But the airline, which is backed by Mexico’s Global Air, has not yet expanded, further highlighting the challenges that PAL has confronted in competing against LAN.

Santiago-Calama was by far the fastest growing domestic route in 1H2013, recording 54% growth to 688,000 passengers, making it marginally larger than Santiago-Antofagasta. Passenger traffic at Calama, which is located in northern Chile, grew by 51% in 1H2013 to just over 700,000 passengers. Calama is now the third largest airport in Chile after Santiago and Antofagasta, having surpassed Puerto Montt and Iquique over the last year.

Chilean market has further growth opportunities but could be approaching maturity

Chile continues to have favourable market conditions which should lead to continued domestic growth. The country’s economy grew by 5.6% in 2012 and is projected to grow by another 4.6% in 2013.

But the market could be viewed as relatively mature, leading to potentially slower growth over the medium to long term. Chile already has the highest number of annual enplanements per capita in Latin America. Unlike other Latin American countries, a large portion of Chile’s population is already flying.

While the country’s unusual geography means other modes of transport are often not an option, the population is relatively small at about 17 million and has been growing at a modest rate of just under 1% per annum. The economy and the tourism sector will continue to expand, but it will be difficult to maintain the rate of passenger traffic growth that Chile has seen over the past few years.

The slowdown in international growth means Chile’s overall aviation market will not this year see the 17% total (domestic and international) traffic growth that was recorded in 2011 and again in 2012. A slowdown in the domestic market could follow but it is highly unlikely that the slowdown will follow what has taken place in Brazil, where domestic traffic was flat in 1H2013. Chile will continue to be a growth market, albeit at more modest levels, with LAN/LATAM continuing to be the main beneficiary.