Chile has recorded 17% passenger growth for the second consecutive year, making it the fastest growing market in Latin America. The rapid growth in Chile is somewhat surprising as it is one of the more mature markets in Latin America and the market is dominated by one player, LAN, which can have a stifling impact on competition. But the small country of 17 million continues to support rapid increases in travel propensity, which is already the highest in Latin America, driven by a strong economy and Chile’s unusual geography.

After recording flat traffic figures for 2009, Chile’s aviation market has grown by 57% over the last three years to 15.2 million passengers, according to Chilean Civil Aeronautics Board data. Growth in 2011 and 2012 was an impressive 17% while 2010 ended with 11% growth despite the impact of a devastating earthquake which struck Santiago in Feb-2010.

Source: CAPA – Centre for Aviation, Brazil’s ANAC, Mexico’s DGAC, Colombia’s CAA, Chile’s CAB and Aeropuertos Argentinas 2000
*Note: Mexico, Peru and Colombia data is for the first 11 months of 2012 because full-year 2012 data is not yet available. For Brazil, Chile and Argentina data is for the full year. All data comes from civil aviation authorities except for Argentina in which case the data comes from the country’s privately-owned airport operator.

The relatively large domestic market in Chile is a reflection of Chile’s high spending power as it has the highest GDP per capita in Latin America – about USD17,000. Chile’s very long and narrow shape, which spans 4,300km from the desert by the Peruvian border to Antarctica, also makes it a natural aviation market.

LAN accounts for more than 75% of Chile’s domestic market

Chile’s carriers are confident the domestic growth spurt seen over the last three years – which included 18.6% in 2012, 17.6% in 2011 and 18.1% in 2010 – can continue. LAN, which merged in mid-2012 with Brazil’s TAM to create leading Latin American airline group LATAM, reportedly expects its domestic traffic in Chile to increase by 15% to 20% in 2013. LAN recorded domestic traffic growth in Chile of 18% in 2012, matching the growth of the overall industry, according to Chilean CAB data.

LAN Airlines and LAN Express both operate under the LAN Airlines’ LA code although the LAN Express brand has a lower cost structure and different labour contracts. LAN Express was initially launched in 2001, taking over flights from Ladeco, which had been an independent Chilean carrier before being acquired by LAN in 1995.

Chile’s second largest carrier, Sky Airline, captured 20% of Chile’s domestic market in 2012, up from 19% in 2011. Sky was able to expand its market share despite the rapid growth at rival LAN by growing its domestic traffic by 24% to 1.7 million passengers. 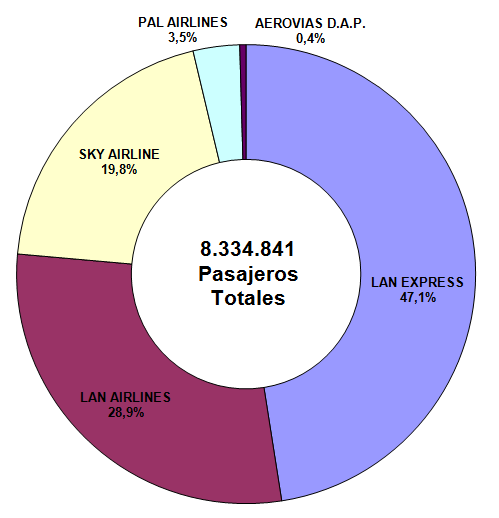 Sky also has been focusing the last three years on renewing its fleet, replacing its original 737-200s with A320 family aircraft. The carrier, which serves 13 domestic destinations according to Innovata data, currently competes with LAN across all major trunk routes.

PAL has continued to shrink in recent months, carrying only 14,000 domestic passengers in Dec-2012 – a 43% reduction compared to Dec-2011 and giving it only a 2% share of the market. It is now barely larger than Chile’s fourth largest carrier, Aerovias DAP, which unlike Sky and PAL is a regional carrier and does not overlap with LAN. DAP, which operates within the Patagonian region of southern Chile, carried about 36,000 passengers in 2012.

Chile domestic RPK, ASKs and load factors by carrier: 2012 versus 2011

PAL, which operates a small fleet of 737-200/300s, is particularly in a vulnerable position. The carrier only operates scheduled services to five domestic destinations. It has struggled to compete against LAN and has been more a nuisance rather than a serious competitor, filing a protest to Chile’s anti-trust court TDLC against the LAN-TAM merger that resulted in a delay to the merger process. More recently PAL filed protests to try to block non-Chilean carriers from operating domestically.

Foreign carriers are free to compete in Chile’s domestic market

Chile has opened up its domestic market to foreign carriers, hoping to attract new entrants and avoid the market from being stifled by powerful LAN. Uruguay’s Pluna briefly operated some domestic routes in Chile in 2009 and 2010 and again in 2012. But Pluna, which carried about 9,000 domestic passengers in Chile during 1H2012, ceased all operations in Jul-2012.

Mexican carrier Global Air, also known as Aerolineas Damojh, entered Chile’s domestic market in 2012 and continues to operate a 737-200 in the country. But it only transported 21,000 domestic passengers in 2012, including 4,000 passengers in Dec-2012, giving it a 0.5% share of the total market. Swedish cargo carrier West Air also has taken advantage of Chile’s openness and started operating during 2012 a Bombardier CRJ200 freighter domestically, which allowed it to capture a 4% share of the domestic cargo market.

But it will be nearly impossible for any carrier – from Chile or overseas – to become a significant player in Chile’s domestic market. The domestic market could potentially be big enough to support an LCC but the prospect of competing with LAN would likely turn off any LCC group that potentially considers a Chilean operation – such as Gol, Azul or VivaColombia/VivaAerobus. Competition with LAN already prompted Gol to suspended international operations in Chile in 2012, leaving the Chilean market without a single LCC.

The fact Chile’s domestic market has been able to grow rapidly over the last decade with only a slight increase in competition shows the market can still expand despite having a dominant leading carrier. LAN has only seen its market share slip by 6ppt over the last decade, from 82% in 2003 to 80% in 2007 to 76% in 2012.

LAN believes its cost structure and fares are low enough to support further growth, particularly among the portion of Chile’s 17 million people who have not flown before. LAN has said it carried about 1 million first time fliers in Chile during 2012. This trend will likely continue as Chile’s economy, which expanded by about 5% in 2012 and is expected to grow by another 5% in 2013, and the country’s middle class continues to grow.

While almost the entire country is already covered by air, there are opportunities to continue growing on most existing domestic routes. In 2012, LAN Express recorded double digit growth on eight of its 10 domestic routes (see background information), giving LAN confidence there is room to pursue double-digit domestic growth again in 2013.

The strong economy will also likely drive further rapid growth in Chile’s international market. Outbound international travel has been growing as more and more Chileans have the income levels to holiday overseas. The outlook for the inbound travel market is also promising as Chile has become a major tourist and business destination.

Chile’s domestic market overtook Chile’s international market in size during 2009 and every year since the domestic market has been growing at a faster pace. But Chile’s international market has also grown at an impressive clip since 2009, growing by 9% in 2010 despite a huge drop in traffic during March because of the late Feb-2010 earthquake, followed by 17% growth in 2011 and 16% in 2012. 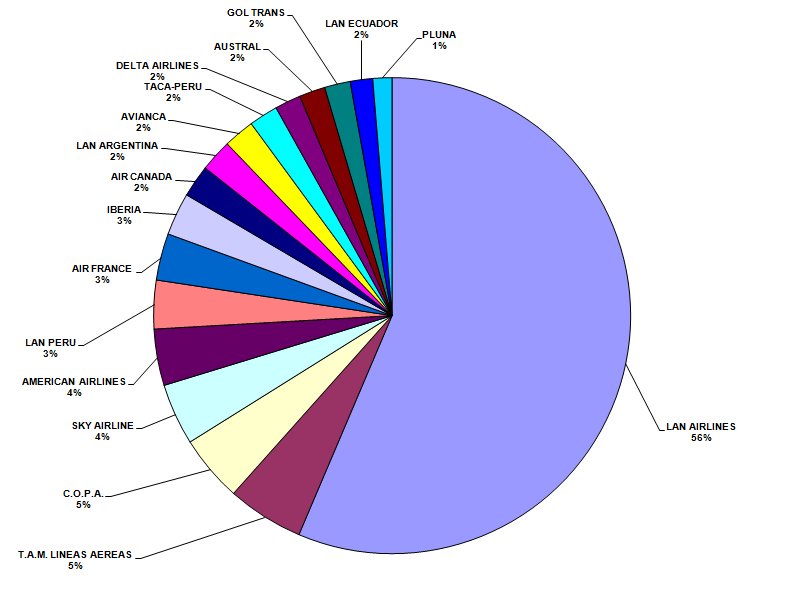 Chile’s international traffic (number of passengers carried) by carrier: 2012 vs 2011 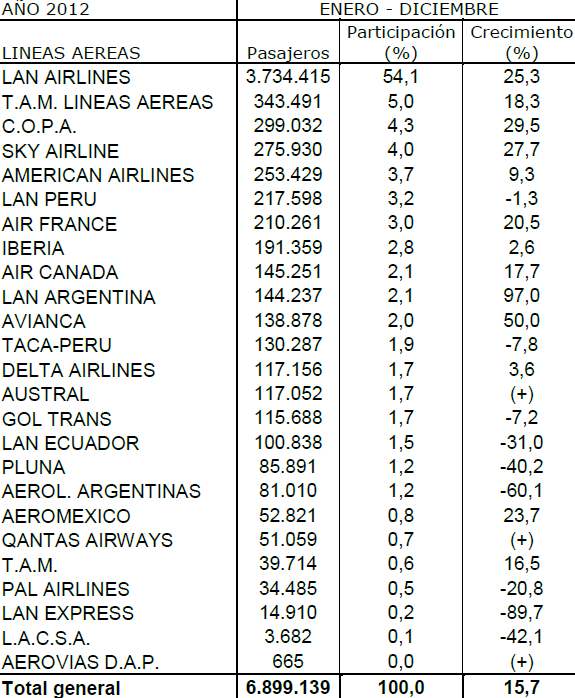 LATAM is the only airline group with a strong position in Chile’s international market as there are no other players with more than a 4% share. Two other leading Latin American airline groups, Avianca-TACA and Copa, only captured a 4% share of Chile’s market in 2012. American Airlines and Sky Airline also captured a 4% share while Aerolineas Argentinas, Air France and Iberia each captured 3% shares.

There are currently only 13 airline groups serving Chile, including the smaller local airlines Sky and PAL.

Sky currently serves four scheduled international destinations: Arequipa and Lima in Peru; Buenos Aires in Argentina; and La Paz in Bolivia. The carrier grew its international traffic by 28% in 2012 to 276,000 passengers (includes charter passengers). Most of Sky’s international expansion came in 2011, when international growth of 241% was recorded on a very low base.

The partnerships are logical as it gives Sky some leverage in the Chilean market against powerful LAN while Aerolineas and Avianca-TACA gain domestic feed for its services to Santiago. While LAN and to a lesser extent Sky have some international flights from secondary Chilean cities, all foreign carriers in the Chilean market currently only serve Santiago. As LAN is in oneworld, it is logical for airlines from SkyTeam such as Aerolineas and from Star such as Avianca-TACA to use Sky to virtually expand their networks in the fast-growing Chile market.

Sky faces uphill battle as it tries to compete with LAN

Sky, however, still faces a challenging future as independent carrier. There are very few remaining carriers in Latin America that are competing on major routes (rather than thin regional routes) and are not part of one of the region’s seven major groups. Sky may ultimately need to sell out to a larger airline group such as its partner Avianca-TACA.

Sky’s hiatus in further expanding its international network since late 2010, when it added Buenos Aires and Lima, illustrated the challenges of competing against LATAM. Sky for example could have launched Santiago-Sao Paulo and would have been given slots at Sao Paulo Guarulhos from LATAM as part of a mitigation measure in the LAN-TAM merger.

But Sky has not yet entered the market, leaving LAN and TAM as the only carriers in the second largest international route from Santiago. Brazil’s Gol previously served the route but stopped operating non-stop flights between Santiago and Sao Paulo in 2008 and in Oct-2012 also dropped one-stop services, leading to an even stronger position for LATAM. About 850,0000 passengers flew between Santiago and Sao Paulo in 2012. Only the Santiago-Buenos Aires route was larger, with nearly 1.2 million passengers. 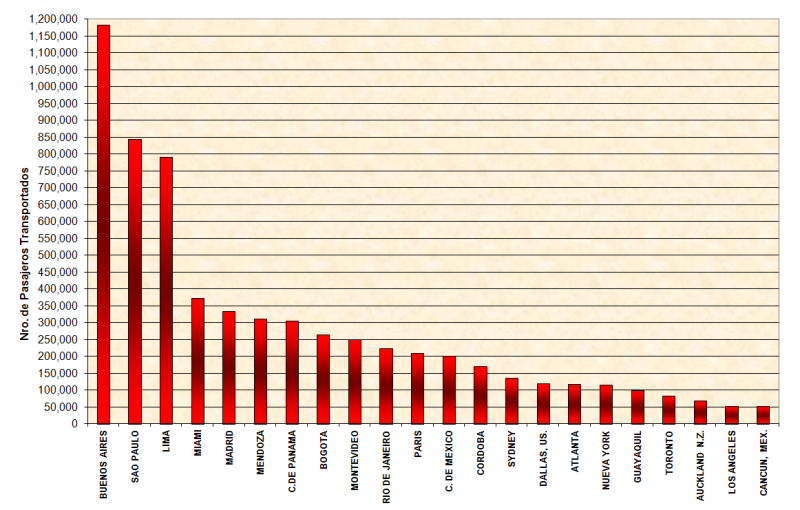 Santiago International Airport has seen rapid growth in recent years, prompting the airport to launch a terminal expansion project. The airport handled over 14 million passengers in 2012 and has seen traffic growth of nearly 60% since 2009. The airport is now operating over capacity but construction is expected to begin this year on a new multi-phase project which is designed to increase the airport’s capacity to about 29 million annual passengers. 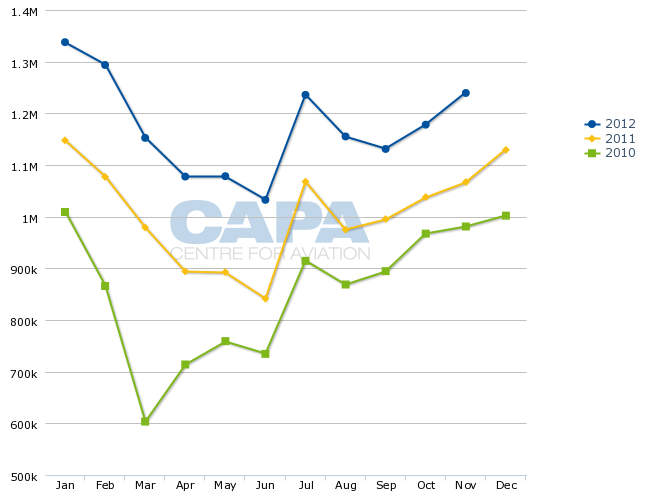 Iquique, Easter Island, Antofagasta, Arica, Punta Arenas and Conception also have international airports but with limited services. Antofagasta is the second largest airport, handling 1.6 million domestic and 15,000 international passengers in 2012. Iquique, Puerto Montt and Calama are all roughly equal in size, each handling about 1.1 million passengers in 2012. Projects have been unveiled to expand all three of these airports. 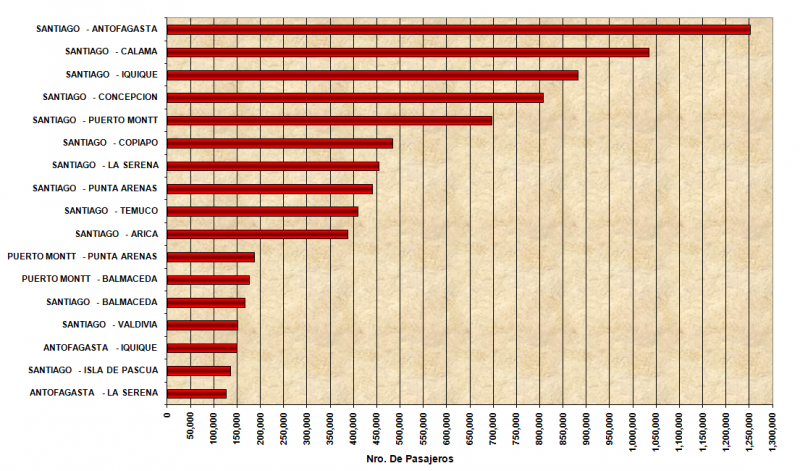 Santiago and Chile’s aviation market has benefited significantly from being the home of LAN, which started as a tiny carrier in a remote corner of the world before the company started pursuing a rapid pan-South America expansion strategy that included establishing passenger airline affiliates in four countries before merging with TAM, the biggest carrier in South America’s largest market. Chile’s market is poised for further rapid growth as LATAM continues to expand at several of its hubs.

But the market could also benefit from more competition, particularly outside oneworld. TAM is expected to join LAN in oneworld, which would further grow oneworld’s share of Chile’s international market from 69% to an even more powerful 75%. Chile would also benefit from more low-cost carrier services as the market lost its only LCC in Oct-2012, when Gol dropped service on the Santiago-Buenos Aires-Sao Paulo route.

The loss of Gol shows the challenges that Chile faces in attracting carriers in a market dominated by LATAM. While Chile’s aviation market will likely continue to grow at a rapid clip for at least the near to medium term, LATAM will likely continue to control three-quarters of the domestic market and two-third of the international market. Chile’s consumers would benefit from more competition but the overall relatively modest size of the market and LAN’s very strong position means new entrants are unlikely and the smaller carriers now serving the market face a challenging future.

LAN Airlines top 20 international routes based on passengers carried: 2012 vs 2011 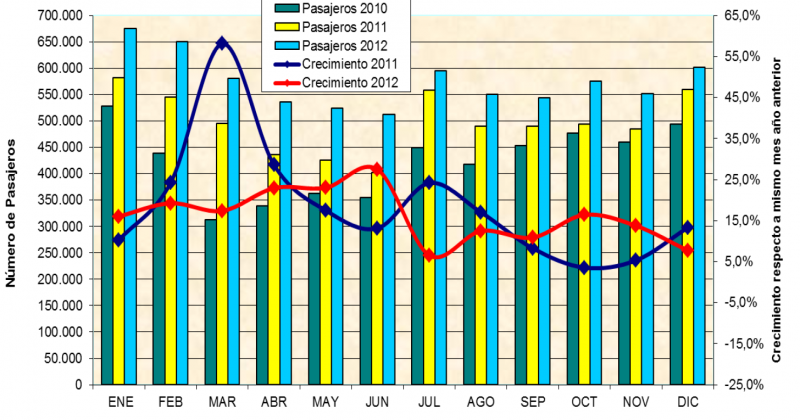