We are now well into the current earnings season and airlines across are almost universally deeply in the red. At present there is no obvious reason for optimism in the region’s airline sector. Some isolated hints of wider economic improvement are showing, but at this stage it may take some time to distinguish them from the immediate effects of government financial stimuli.

For the airlines specifically, yields in both the freight and passenger areas are still extremely depressed and it is difficult even to detect clear signs of a bottoming - let alone an improvement. Traffic is heavily subdued and, despite some drastic cuts in capacity and prices, passenger numbers are still slowing.

China appears to be an exception; domestic traffic is stronger than elsewhere (off last year’s depressed base), although China international is very slow. The Chinese data are made complex owing to the lumpy 2008 traffic flows on which comparisons are based, heavily influenced first by a cold winter, then the Sichuan earthquake, followed by the Olympics and their associated security/visa restrictions. It is not clear if domestic travel is reliant on Beijing's economic stimuli, but if it holds up over the next quarter, we will begin to see some solid recovery. However that is not apparent yet.

Air freight has typically proven a reliable forward indicator, but this segment remains depressed, with yields down by 20-30% and falls in volumes now compounding on last year’s reductions at some of Asia’s biggest hubs.

The first reliable indicator now of whether we are coming out of the depths should be when we start to see the October freight traffic bookings, as the Christmas season begins. Last year this was a major disappointment. If it is not stronger this year, we are in for a very difficult 2010 as well.

Full service carriers in particular are in disarray. JAL for example reported a USD1 billion net loss in its first quarter to 30-Jun-2009. One of the contributors to the full service sector turmoil is of course the LCC segment, much of which continues to expand rapidly.

LCCs have benefited from increasing price sensitivity of consumers and business travellers and lower oil prices that have flowed from the global economic malaise. LCC capacity share has risen 1.9 ppts over the past 12 months as the LCCs grew their capacity by 15.7%, against overall industry capacity growth of just 2.7%;

LCCs are responsible for all of the growth in intra-Asia Pacific seat capacity over the past couple of years. Indeed, full service carriers have grown their capacity by just 5.7% above Jun-2006 levels (and most are again actively reducing). 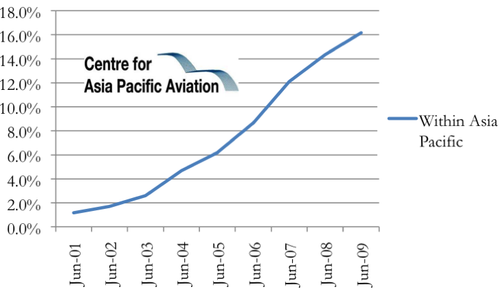 The low cost, long-haul airline expansion is however the standout.

New low-cost long-haul players, led by AirAsia X and Jetstar, are aggressively targeting this market space, where overall capacity levels declined 2.3% in Jun-2009 year-on-year. Since Jul-2006, full service carriers have however grown their capacity levels by just under 12%.

The LCC trajectory in coming years will be dented somewhat by Jetstar’s continued long-haul expansion setbacks due to the B787 delivery delays (and now the cancellation of the initial deliveries by the cash-conserving Qantas Group). 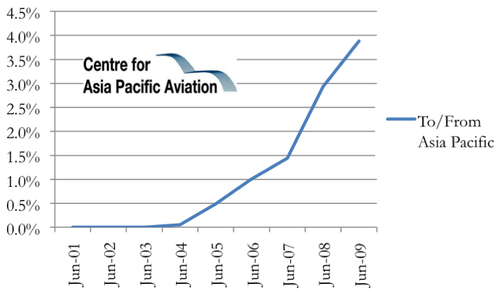 LCCs provide governments with a fresh policy option in terms of the provision of (often loss-making) domestic services. South Korea and New Zealand have recently joined Malaysia, India, The Philippines, Thailand and Australia with a vibrant domestic LCC scene, providing governments a new policy option in addition to provision of domestic services by the national carrier (sometimes requiring significant subsidies and regulatory protection).

Watching this growth performance, governments across the Asia Pacific region could be compelled to embrace and encourage the low cost carrier (LCC) segment, as it offers a demonstrated commitment to growth in seating capacity. This is driving and sustaining crucial tourism and related industries across the region, supporting jobs and economic growth.

Critical to expansion of the LCC segment is the proactive liberalisation of aviation access, development of appropriate infrastructure for the segment (eg terminals and customs/security arrangements) and incentives in the areas of taxation and airport charges to foster the sector’s development – both factors applicable to airlines of all types, if government are serious about tourism expansion.

How long can the full service airlines hold their breath?

All Nippon Airways (ANA) released (31-Jul-09) details of its Emergency Income Recovery Plan, aimed at securing an additional JPY30 billion (USD317 million) in revenue by the end of FY2009 (12 months to Mar-2010) and enabling ANA to achieve its performance goals for the year. The plan, which supplements the carrier’s FY2009 Corporate Plan (which aims to reduce costs by JPY73 billion in the period).

Japan Airlines stated in early Aug-2009, “while business travel is projected to remain slow, JAL will persevere in the drastic adjustments to our network, down-sizing our aircraft, and implementing “nothing-off-limits” cost-cutting measures to improve profitability. Japan Airlines stated (07-Aug-09) international passenger demand deteriorated in 1Q2009, resulting in an eye-popping 33.7% reduction in yield in the period. Domestically, the carrier faced reduced demand, particularly in the premium segment, and heightened competition, resulting in a 2.5% yield reduction.

After a big operating loss in the three months to 30-Jun-2009, Malaysia Airlines is ramping up cost-cutting activity, as it expected the outlook for the third quarter 2009 “to remain soft”. MAS stated, “while there are some signs of improving economic climate, the airline industry is still faced with weak demand and downward pressure on yields. The operating environment remains volatile with the H1N1 "pandemic" impacting travellers' confidence”.

Singapore Airlines, whose yields crumbled 20% in the three months ended 30-Jun-2009, stated yields are “expected to remain under pressure from excess capacity in the market”. SIA added, “if these conditions continue, the Group expects to make a loss for the full year”. Singapore Airlines plans to implement a 10% pay cut for its non-management staff for three months commencing 01-Aug-09, after the carrier reported a net loss for 1Q2009.

Cathay Pacific Chairman, Christopher Pratt, stated, “the global aviation industry, hit hard by soaring fuel prices in 2008, is now having to confront one of the most severe demand downturns in living memory. There are cautious signs that the fall in demand has bottomed but there is, as yet, no indication when a sustained pick-up will begin”. He added, “Cathay will take further measures as necessary should the cost and demand picture not improve”, stating “however, the Company will ensure that quality and brand are not compromised and that the service proposition to the customer remains intact and strong”.

Unlike Qantas, few legacy airlines in the region have dabbled with LCC subsidiaries. For example, Cathay’s former Chairman, James Hughes-Hallett, said in 2004, “we're not sure the economics of the low-cost model would work in Hong Kong - there's no other airport in Hong Kong than Chek Lap Kok, for instance”.

Cathay now faces rising short-haul competition from regional LCCs and in early Aug-2009, the carrier stated it is considering removing some of its premium-class seating and installing more economy seats, to better match demand-supply levels in the current operating environment. A foray into the LCC segment is now not likely for Cathay Pacific. It will be focusing on preserving cash levels until the crisis abates.

But for other carriers, particularly those in India, the point of no return appears to have been passed.

India’s major airlines, bathed in red ink, are adopting a “if you can’t beat ‘em, join ‘em” response, with Jet Airways, Air India and Kingfisher all significantly moving into “budget” airline operations in the domestic market over coming months. The chances of success are however slim, as none of the proposed models have significantly lower cost bases than the fast-charging LCCs in that country. India has the largest proportion of LCC market share in the world at around 55%.

In a marketplace where mergers and acquisitions are not a viable option (see below), incumbent full service airlines therefore face a stark choice: participate in the low cost segment, or confront it head-on (with a legacy cost base), with the hope of funding short-haul losses from slimmed down long-haul operations, bolstered where possible by alliances and other partnerships.

Qantas CEO, Alan Joyce, however said this month that mergers and acquisitions between airlines in the Asia Pacific region were more than ten years away, due to regulatory and commercial barriers. Mr Joyce’s comments are at odds with former Qantas CEO, Geoff Dixon, who was an avid supporter of consolidation in the region, although Mr Joyce is operating in a very different climate from his predecessor.

Mr Joyce stated, “we see liberalisation as a prerequisite for this to fully occur, and this is going to take some time in the region, adding “rather than putting all the management effort into trying to make one of these big deals happen…we need to focus management effort on managing the core business.’’