REDjet, the first and only Caribbean low-cost carrier, is aiming to pursue dramatic expansion in 2012 with up to eight new destinations. The ambitious and pioneering carrier, which launched services in May-2011, plans to add three destinations by early April, giving it a total of nine. The carrier aims to end the year with a network of up to 14 destinations throughout the Caribbean, northern South America and potentially Central America.

While REDjet’s growth plans are impressive, it has to overcome several roadblocks as it continues to battle to secure authorisations for almost every new route. It has so far faced opposition in nearly every market it has entered, particularly in the early days with Trinidad and Tobago and Jamaica. The aviation market in the Caribbean region is small and stifled by outdated policies and protectionist governments, making the market difficult for any private carrier to operate in, particularly an LCC which threatens the long-term viability of inefficient flag carriers.

The seven to eight new routes Barbados-based REDjet plans to launch are likely to include the Dominican Republic, the Netherlands Antilles (which will be served via Saint Maarten), Saint Kitts and Nevis, Grenada and Suriname. These destinations would add significantly to REDjet’s operations, but the carrier is likely to encounter lengthy processes with obtaining permissions. Initial permissions were reportedly obtained in 2H2011 for several of the planned new routes but, as the carrier has discovered with several of its existing routes, securing final approvals can be challenging and very time-consuming.

Three of REDjet’s four initial routes were unable to launch as planned in May-2011 – Barbados-Jamaica, Barbados-Trinidad and Trinidad-Jamaica. Barbados-Trinidad ended up launching in Aug-2011 while Barbados-Jamacia and Trinidad-Jamaica launched in Nov-2011, ending months of discussions between the Barbados, Jamaican and Trinidad and Tobago governments. REDjet’s first route, and the only one to be launched in May-2011, was Barbados-Guyana. REDjet continued to sell the other three routes for several months, revisng the planned launch dates multiple times.

Regulatory challenges also slowed the carrier’s expansion as it was unable to launch its planned fifth route, Georgetown (Guyana)-Port of Spain, until late Sep-2011 (this ultimately ended up being the carrier's third route as it was launched ahead of Barbados-Jamaica and Trinidad-Jamaica). All the regulatory issues led to costly underutilisation of REDjet’s initial fleet of two Boeing MD-82s for the first six months of its operation.

In more recent months, REDjet has failed in attempts to secure permission to launch service to Panama, which would be the carrier’s first Central American destination. Barbados and Panama signed a MoU for an air services agreement in Jul-2011, providing hope for REDjet that it could secure permission to operate the Barbados and Saint Lucia to Panama routes. Discussions between REDjet and the governments of Panama, Saint Lucia and Barbados subsequently began in Aug-2011 but have still not yet yielded an agreement.

Potential new routes within the Caribbean community and common market, CARICOM, have proven equally difficult to secure. CARICOM was established in 1973 by Barbados, Guyana, Jamaica and Trinidad and Tobago with the goal of improving integration among the economies of its members by coordinating foreign policies and pursuing financial cooperation in a number of areas, including air transportation. CARICOM now includes 13 Caribbean countries as well as Guyana and Suriname in northern South America.

CARICOM legislation allows all carriers transit rights in other member states, meaning any Caribbean carrier has permission to operate over any state’s airspace or to land in a member’s state for non-traffic purposes. But CARICOM does not permit cabotage and there are no open skies agreements among members. Fifth freedoms have to be negotiated on a country-by-country basis.

REDjet intended destinations and their relationship with Barbados

Despite the challenges of restricted air service agreements, REDjet has been able to secure some fifth freedom traffic routes. Some of these, such as with Trinidad and Tobago and Jamaica, took months to secure from authorities.

REDjet has so far only increased frequencies on one route, Port of Spain-Georgetown. It is primarily focussed on opening new routes and destinations. 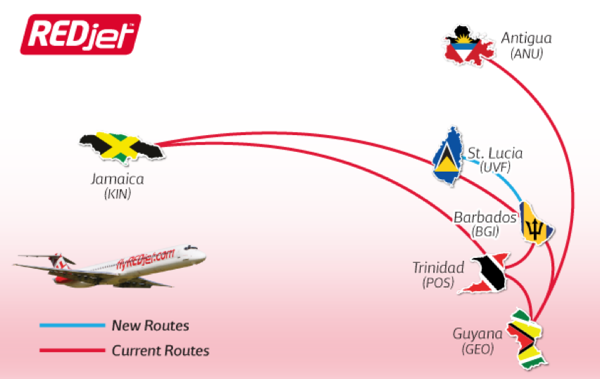 REDjet looks to Jamaica as possible second base

REDjet chairman Ian Burns said late last year the carrier is considering establishing a base at Kingston Norman Manley International Airport. This could lead to the carrier’s next phase, which includes services to the US and Canada as per the company’s original business plan.

Kingston Airport has a considerably higher capacity than Bridgetown Grantley Adams International Airport and is better connected to North America than Bridgetown. Jamaica has an established an open skies agreement with the US, signed in 2008. Barbados and the US have had an open skies agreement since Jul-2010 but full implementation has been slow.

REDjet launched operations in May-2011 with two MD-82s and still only operates a two-aircraft schedule. But the carrier will soon place into service a third MD-82, which will support an expanded schedule.

The third MD-82 was delivered last month. REDjet is currently training additional pilots and cabin crew and plans to start deploying the aircraft later this month.

REDjet’s MD-82s, previously operated by American Airlines but now owned by REDjet, can accomodate 149 passengers in a two-class configuration. The range of the MD-82, 3798kms, would enable the LCC to reach New York in the US and Sao Paulo in Brazil.

REDjet originally said it aimed to operate a fleet of 25 aircraft by 2016. But difficulties in obtaining traffic rights will likely result in this goal being reduced.

Barbados’ Government is bullish on REDjet’s growth as its expansion will be able to increase tourism and would help the overall economy. REDjet is the only Barbados-based airline. As REDjet’s operations are not yet fully established, the carrier has not yet had a significant impact on tourism in Barbados. 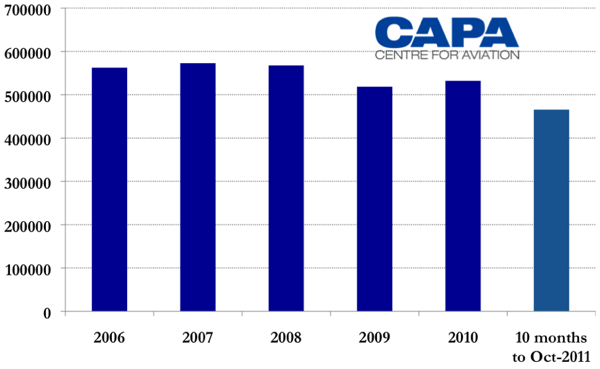 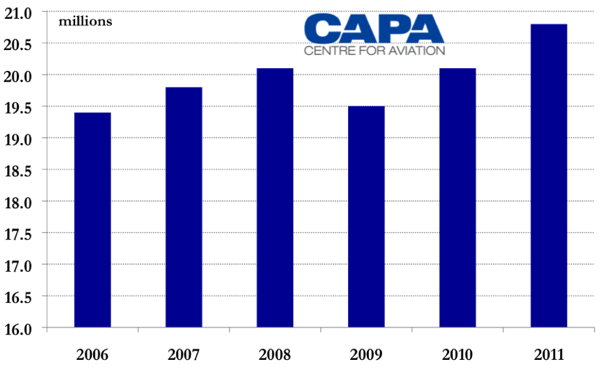 Barbados has the foundations to develop a strong aviation industry on the back of its strong tourism industry. The country’s unemployment rate is relatively low and employment in the services sector is high. Tourism is a major earner for the country, which recently over took sugar production as the country’s top revenue generator.

But its economy is sluggish, having contracted 0.5% in 2010, giving Barbados the 22nd slowest GDP real growth rate in the world, according to the CIA World Factbook. The country’s PPP (purchasing party power) is low as well, and at USD6.227 billion, puts the Caribbean country just behind Mauritania and Mongolia in terms of worldwide rankings.

Another issue facing Barbados and the Caribbean overall is its dependence on the North American and Western European markets, meaning it is adverse to the ailing economic climates in those markets. Links between Barbados and Latin America, where the economies are generally stronger, are limited. 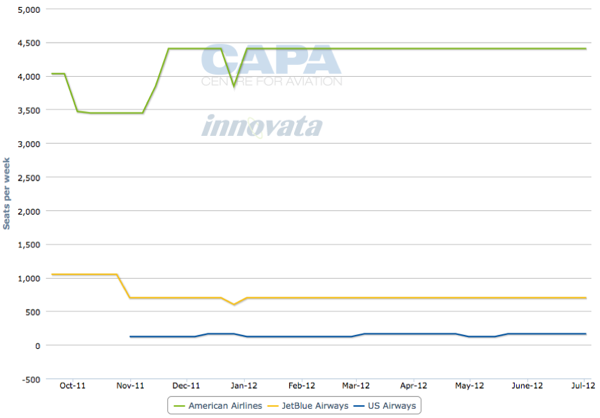 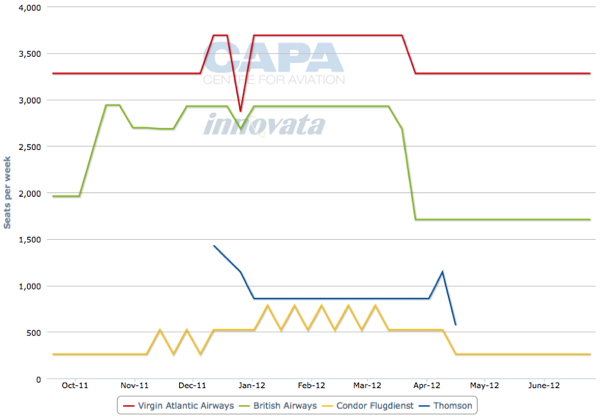 Without more liberalisation, REDjet could struggle

It is likely REDjet will continue to struggle to open new routes as government reforms are slow moving. The lack of open skies agreements in the region leads to missed opportunities for growth and low levels of competition, resulting in high fares and low standards. While this will ultimately prove a challenge, REDjet shows signs that it is determined to connect the islands and improve tourism in each of the countries it serves.

REDjet is hoping Caribbean governments will start recognising the positive impact an LCC in the region can have on the economy and tourism. The carrier has bold plans that, if successful, could see it launching service to destinations outside the Caribbean such as Central America, Latin America and even the US and Canada. This in turn would improve the Caribbean’s lifeblood – tourism. REDjet has been applying pressure on various authorities to open skies and establish air service agreements but without new reforms REDjet will struggle to succeed.

Caribbean countries have been moving forward with open skies agreements outside the region. For example, Jamaica aims to finalise deals with Switzerland, Turkey and Brazil and Barbados, and is in the process of implementing a deal with the US. But protectionism in the regional market still exists as the governments continue to be reluctant to fully open up the regional routes that are served by the carriers they own.

The core pillar of REDjet is to increase demand and facilitate tourism in the Caribbean by providing low fares under the LCC model. However in order for the carrier to successfully contribute to the state’s economies, a more conducive operating environment needs to be established.