REDjet stated it plans to commence service on 08-May-2011, with services across the Caribbean, although some questions do remain over whether the carrier has the necessary approvals from the Trinidad and Tobago government to commence operations.

The carrier, with its slogan "The Caribbean’s low-fares airline" will launch operations with services between Barbados and Trinidad, followed within days by three further routes, with a network of five destinations within the first two weeks. The airline intends to open bases across the region as it develops routes to exciting destinations across the Caribbean, Latin America and to the US.

The Barbados-based carrier will initially operate four times weekly service to Georgetown (Guyana), three times weekly service to Kingston (Jamaica) and daily service to Port of Spain (Trinidad) from Bridgetown (Babados). It will also operate four times weekly Port of Spain (Trinidad)–Kingston service. Fares start from USD9.99 excluding taxes and charges and will lower the cost of travel by over 60% on average.  The airline stated its ambition is “to strive continuously to lower fares even further making air travel affordable for everyone”.

Source: Centre for Asia Pacific Aviation and Innovata data for weekly of 02-08-May-2011

LIAT is the dominant carrier at Bridgetown Grantley Adams International Airport at present, with 34% of weekly capacity, based on Innovata data for May-2011.

Bridgetown Grantley Adams International Airport capacity (seats per week, to/from)
by carrier (02-May-2011 to 08-May-2011) 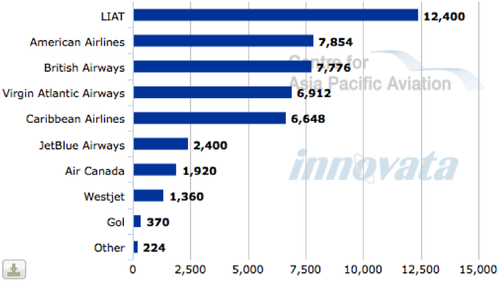 The airline has two owned MD-82 jet aircraft configured with 149 seats and powered by two JT8D–217A engines. The aircraft, with have an average age of 24 years, were previously operated by American Airlines. The aircraft will be configured in all-economy with a seat pitch of 33 inches.

REDjet stated it has purchased the aircraft and has also partnered with Allegiant which is providing the carrier with technical support and leased engines on “attractive terms”. The carrier stated it would not overnight any aircraft or crews to reduce hotel and maintenance costs. The carrier is outsourcing its main maintenance and ground handling functions with ServisAir to  handle REDjet’s ground operations at Piarco International while Laparkan will take charge of the airline’s travel agency services at the airport. In typical LCC fashion, the carrier is seeking to operate with low overheads and distribution costs.

“REDjet’s offices are based at the side of the runway in GAIA and are affectionately known as the Shed and the Garage. While they house specialised maintenance facilities and an operations control centre, our offices are also home of the lowest cost sales and marketing department of any major airline in the Caribbean and of course our monthly staff BBQ. Stationary, telecommunication costs and all other overheads are kept rock bottom. Quite simply we have the lowest cost overhead by a mile. Using a web-based reservations system and by not using GDS or other industry booking engines, and by also not subscribing to travel agency fees, REDjet keeps distribution costs to a minimum,” the carrier said on its website.

The focus on costs extends to hiring pilots and cabin crew on highly flexible performance programmes and highly incentivised corporate office staff. Staff are offered training in multiple areas of the business, resulting in a reduced staff per passenger ratio. REDjet also has a fast aircraft turn time and any unnecessary processes have been removed, with the carrier able to achieve a 25-minute turn-around.

The carrier has fares from USD9.99 or USD29.99 depending on the demand for the flight. In Trinidad and Barbados, the carrier advertise fares in the local equivalent and will soon launch this in Guyana and Jamaica. Between 15 and 40 seats, or 10% to 27% of all available seats, on a flight are sold at this fare class. After that, the fare rises in USD10 increments according to demand as the aircraft fills. The carrier’s average fare across our routes is USD59, or over 65% cheaper than any regional airline on the same routes.

REDjet operates a pay for what you want policy. It offer one carry-on bag and a handbag or laptop case both weighing up to 10kg each based on a standard size of luggage. Checked bag fees start from USD10 for the first bag and USD30 for the second depending on the size. The carrier stated a second bag with REDjet is “substantially cheaper than on Caribbean Airlines (USD100), Air Jamaica (USD100) and on LIAT (USD60 to USD90).” The carrier also offers a number of extra services, such as Travel Insurance, SMS ticket confirmation, F&B and Priority Boarding. 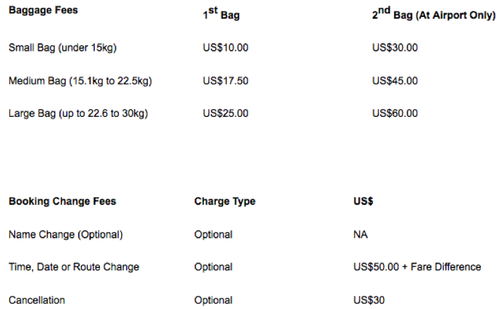 The company is privately owned and incorporated in St Lucia. Its corporate offices are situated in Grantley International Airport in Barbados where it will open its first aircraft base with its initial two aircraft. It was founded in 2006 by Robbie and Ian Burns and employs 93 people.