Encouraging momentum in 1Q2014 has slowed in 2Q2014 as costs no longer show the sharp decreases of 1Q2014. Korean Air will scale back in Japan while growing in China and the Americas. China growth however is not to prized destinations while Americas growth may hinge on Delta's cooperative spirit - or not. LCC competition, already strong in the domestic market, will continue with more foreign LCCs entering. Korean Air is seeking a larger profile for its LCC subsidiary, Jin Air, by deploying widebody aircraft to short and long-haul points. The pre-emptive move may be short lived as Asiana would like to establish a new Seoul-based LCC if existing LCC Air Busan agrees.

2Q2014 dented year-to-date performance, with 1H2014 remaining in the red, although at a reduced KRW10 billion loss from 1H2013’s KRW183 billion. At a net level Korean Air continues to benefit from exchange gains and reversed a KRW677 billion loss in 1H2013 to a KRW149 billion net profit. 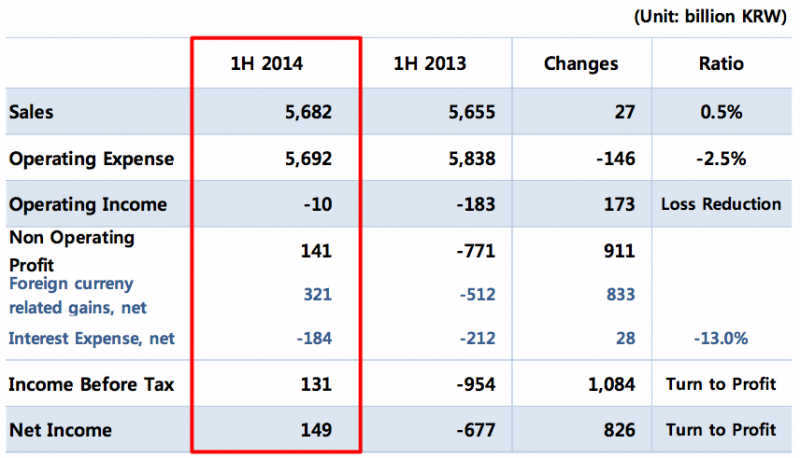 2Q2014 saw essentially flat revenue and costs, with revenue growing 0.6% and costs 0.1%. Capacity, measured in RPKs, grew 3.1% in 2Q2014 and 0.6% in 1H2014. Although it is good to see revenue growing faster (albeit very marginally) than costs, and costs growing slower than capacity, this is a loss of momentum from 1Q2014 when a minor 0.2% increase in revenue and 1.7% decrease in ASKs was paired with a much faster 5% decrease in expenses. 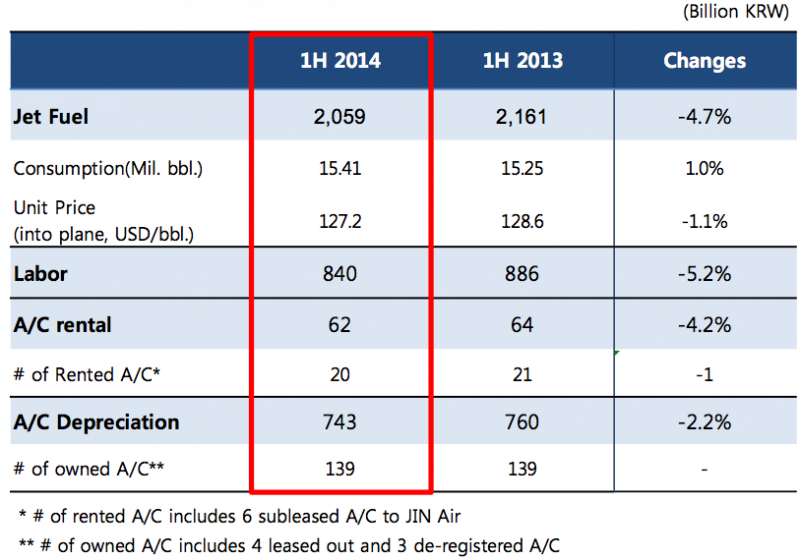 The share of costs in 1H2014 was broadly comparable to 1H2013, with fuel recording a 1ppt decrease and other costs a 1ppt gain. 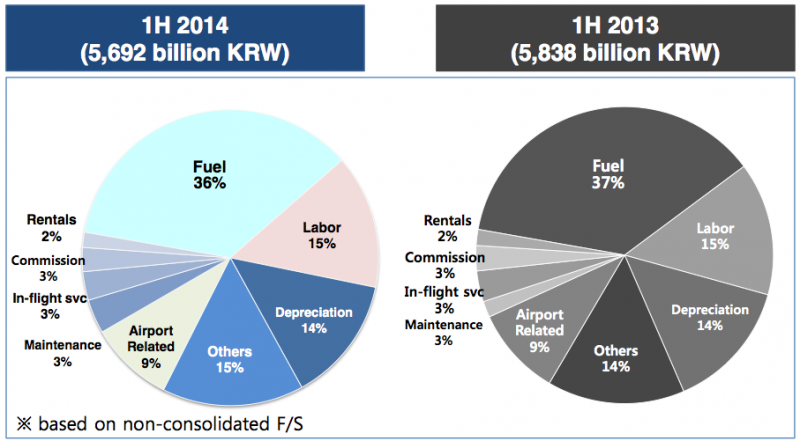 Revenue and RPK changes show correlation, except in China and Japan

The story in Korean Air's 2Q2014 traffic is continuing weakness in Japan but this being offset by gains in China. Other markets – which comprised 78% of revenue – saw unsurprising changes with revenue broadly tracking RPK adjustments.

The exceptions are weakening domestic revenues due to increased LCC competition, with LCCs continuing to make gains in Korea's small domestic market. LCCs account for 34% of available domestic seats in Korea in the year to Aug-2014, according to OAG data. 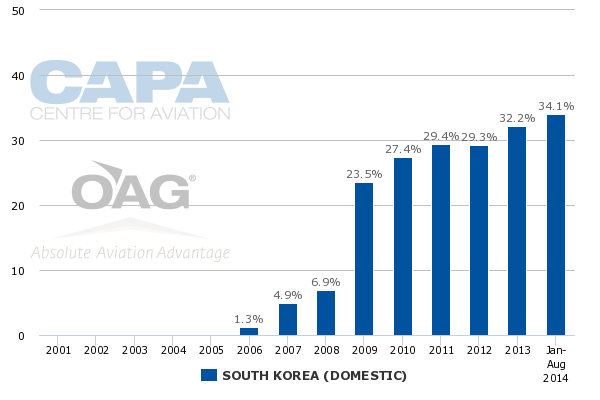 The Oceania region, comprising Australia and also island destinations like Guam, showed a 2% revenue decrease despite 4% RPK growth. Korean LCCs are targeting beach markets like Guam while over-capacity between Asia and Australia has opened up a number of discount transit fares, including on low-cost carriers like AirAsia X.

Korean Air is having to deal with market changes in China and Japan but so far is able to manage these adjustments with the increase in Chinese revenue offsetting the decrease in Japanese revenue. Japan's decrease is partially due to political matters as well as the weakening yen and increased transit options for Japanese passengers (through another foreign hub or now more numerous Tokyo Haneda connections).

Chinese growth is due to interest in Korean culture as well as Chinese tourists shying away from Southeast Asian markets due to the MH17 tragedy, political instability in Thailand and weakening interest in Singapore.

Korean Air is responding by decreasing Japanese capacity, including through temporary destination cuts to smaller cities like Akita and Oita. Despite being the peak summer season, Korean Air's capacity to Japan in early Aug-2014 is down 12% from a year prior. 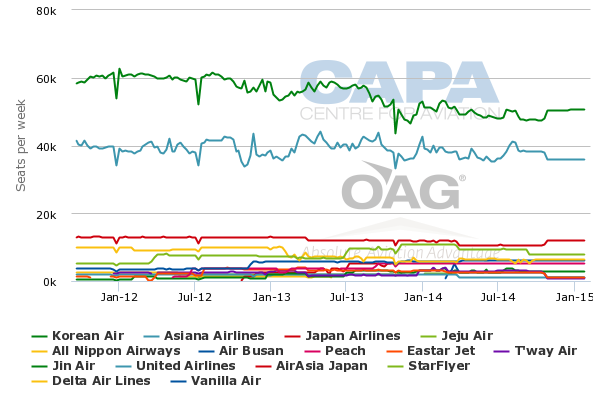 Meanwhile in China Korean Air's seat capacity in early Aug-2014 is up 9%, although this is not a complete view of the market as many services are on a charter basis and not reflected in scheduled capacity. The Korea-China bilateral was finally expanded earlier in 2014 but with marginal gains. Korean Air in 3Q2014 expects to increase frequency to Beijing, Guangzhou, Yanji, Shenzhen, Wuhan and Mudanjiang. 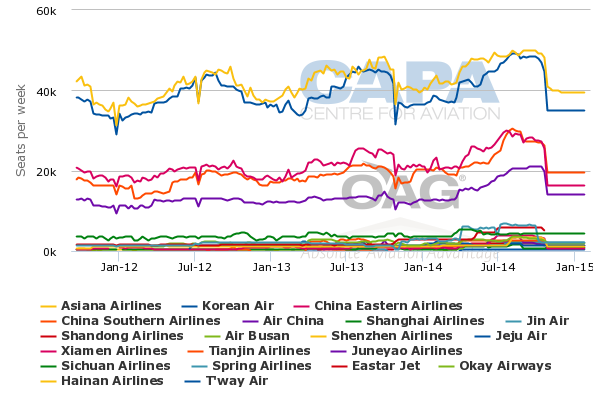 Korean Air plans to grow in the Americas after cutting capacity, in addition to growing in Southeast Asia. 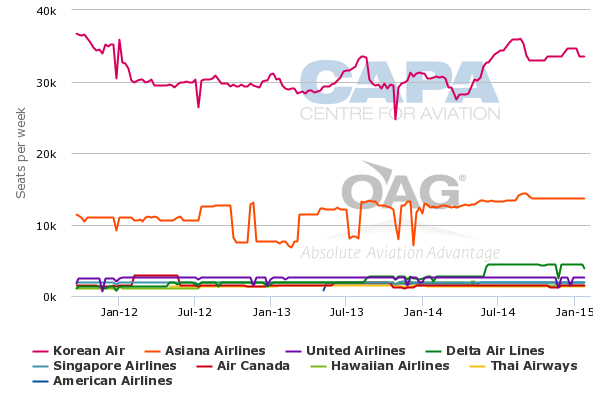 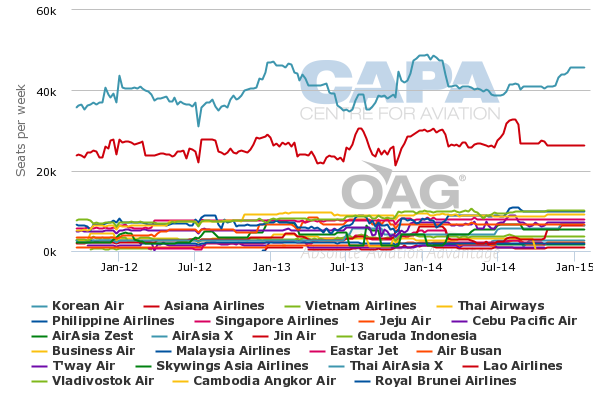 Passenger revenue by point of sale is shifting. Korea grew by 1% due to the strengthening won while overall Korean outbound passengers grew 3%. Japan decreased as expected while Europe's 11% growth has been faster than overall capacity and revenue growth, indicating more European point of sale. Conversely Americas revenue has decreased by 5%, faster than the overall changes.

This may be due to Korean Air's SkyTeam partner Delta implementing a number of changes that disincentives Delta frequent flyers from flying Korean Air. Delta likely hopes these measures will hurt Korean Air and lead Korean Air to form a partnership.

Korean Air is perhaps unique in Asia for being optimistic on the cargo business in the short term. Korean Air now has the largest dedicated freighter fleet in Asia and of all the major Asian airlines, has grown its freighter fleet the most.

See related report: Asian air cargo in a rut: despite all issues, freighter fleet flat but finally starting to decrease

Korean Air grew with a 3.2% increase in AFTKs and a 3.5% increase in yield, which – unlike at other airlines – did not come at the expense of load factor, which increased 1.2ppt to 79.7% (above the average).

There was little correlation with the passenger side of the business as cargo revenue weakened in China and Southeast Asia while growing in the two largest markets of the Americas and Europe, which collectively accounted for 71% of cargo revenue. 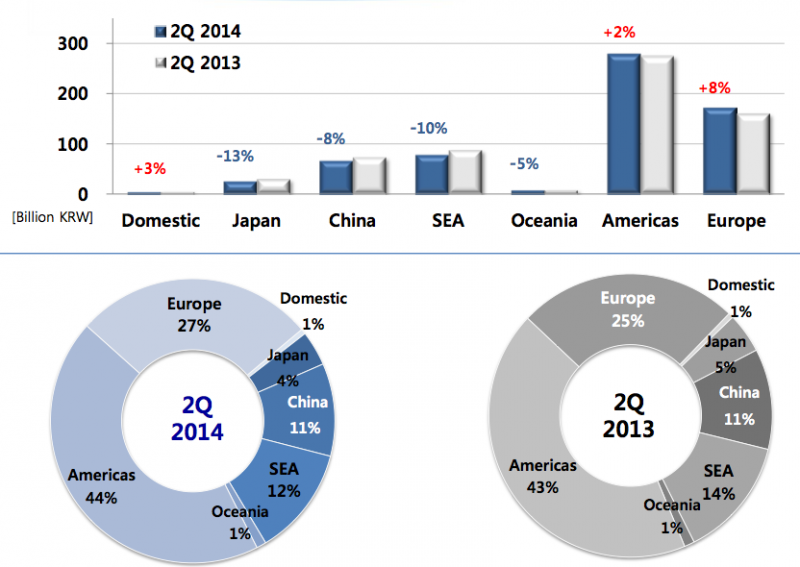 Korean outbound cargo increased 9% while transit cargo increased by 2%. Korean Air expects cargo volume to continue to increase in 2014 and aims to capture cargo from China and emerging cargo markets, as other cargo carriers are doing. Uniquely, Korean Air has flagged "strategic partnerships" with other airlines. Cargo partnerships are increasing within and outside Asia.

IAG partners with Qatar Airways while Cathay Pacific and Air China have a cargo partnership, in addition to Cathay's partnership with DHL for Air Hong Kong.

Source: CAPA Fleet Database
Firm orders include those placed directly by the operator and by lessors assigned to the operator, from 4-Aug-2014 onwards.

As CAPA previously noted, Korean Air is likely to look at an aircraft order as its only delivery after 2017 is projected to be one 787 in 2018.

Flat growth may continue to be wise

Korean Air continues to stand out in Asia for not pursuing large growth. This may be wise as core markets see changes that, while balance each other out (or are even favourable), do require significant management bandwidth to manage. In addition, concerns remain over Korean Air's debt, meaning expansion good for the long term could fuel debt concerns in the short term.

Korea was the first major North Asian market to have LCC developments but these have stalled in recent years. Korean Air is now injecting new energy – and aircraft – into its subsidiary; LCC Jin Air will take three 777-200s from Dec-2014 for short and long-haul routes. There are opportunities to reach new destinations as well as pursue a dual-brand strategy and have Jin Air take over lower yielding leisure routes.

A long-haul division is important if Korean Air is to compete in the low-cost long-haul space that AirAsia X, Thai AirAsia X, Scoot and NokScoot are already occupying or plan to occupy. With short-haul aircraft, Korean LCCs are pressed to reach points south of Thailand or Borneo, and even then do not have widebody aircraft unit costs.

Korean Air's advantage may however be brief, as Asiana too is hoping to establish a new LCC (potentially with long-haul routes) in Seoul, finally competing in Korea's main LCC market after limiting partially-owned Air Busan to its smaller namesake city, Busan. But Asiana is challenged by Air Busan shareholders who rightfully see the new LCC impacting Air Busan's business. A Seoul LCC presence will be necessary for Asiana, adding to a more dynamic market in Korea.

As markets and business divisions undergo varied and significant change, a pause for consolidation may be a valid option for Korean. It will be important to ensure that there is long term vision to regain the initiative.