The number of Chinese outbound tourists in 2014 will likely exceed 100 million, more than the population of Germany and nearing the population of Japan. Yet this will still account for less than 10% of China's population taking one international trip a year. Importantly too, the growth rate is very high.

These are obviously market-changing opportunities for airlines, especially in North Asia, where most Chinese travel to when going abroad. But in the short term the opportunities are mixed for countries as overseas Chinese tourists shift destination preferences.

This first of a two-part report looks at Chinese demand for travel to Northeast Asia, where growth is generally positive. Japan experienced challenges in late 2012 and early 2013 as political tensions saw visitor arrivals dramatically fall; Japan has since rebounded. South Korea was a beneficiary and continues to maintain momentum; Chinese visitor arrivals are up 57% in the first five months of 2014.

The second part of this China tourism report will look at Southeast Asia, where tourism figures have recently softened.

Nearly 100 million Chinese travelled abroad in 2013, almost double 2009's rate of 49 million. Such seismic growth brings structural change to tourist economies and the airlines that transport passengers. 2013's rate is equivalent to less than 8% of China's population taking one overseas trip a year. 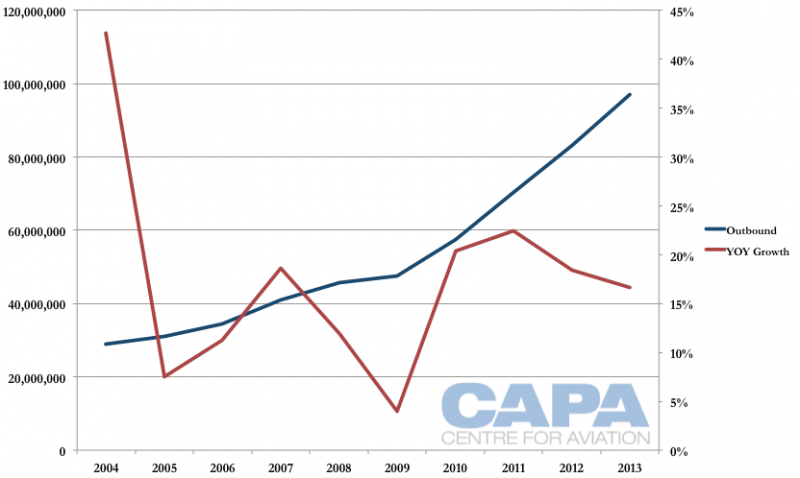 From an aviation perspective of China's international market (which also accommodates inbound and sixth freedom passengers), 74% of international seats to/from China are from Northeast and Southeast Asia – mostly Northeast. 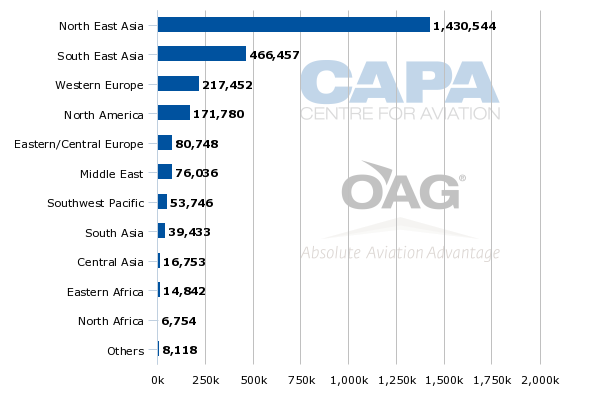 Given the high share of Northeast Asia, it is unsurprising China's four largest destination countries/regions for international seats are within Northeast Asia.

Thailand, the world's second largest tourist destination, was fifth (first was London as Bangkok slipped due to the political environment), while the US was sixth. 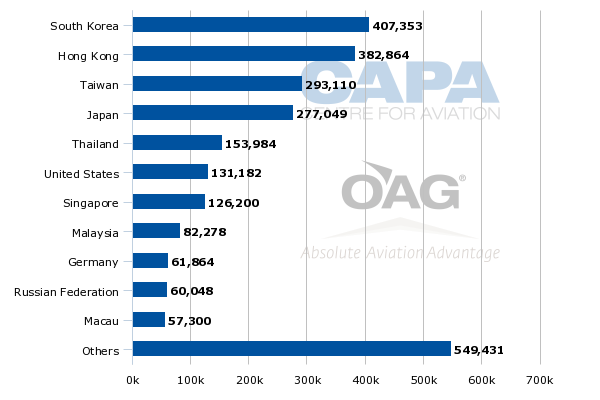 China's "Big 3" airlines – China Eastern, Air China and China Southern – are the three largest carriers with international seats to/from China. The next five largest carriers are all foreign, with only one other Chinese carrier – Xiamen Airlines – breaking into the top nine. 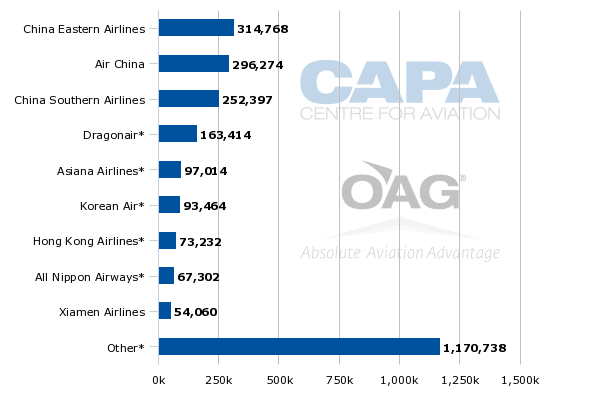 Growth is most profound in Korea. 2012's 2.8 million Chinese visitors increased 28% year-on-year, and 2013's 4.3 million represented 53% growth – nearly a doubling of 2011's figures. Visitor arrivals to Korea are up 57% year-on-year in the first five months of 2014. Korea has been the largest recipient of short-haul travel as Chinese shift away from Southeast Asia and Japan. Consequently, for most Chinese airlines Korea has surpassed Japan in being one of – sometimes the – highest yielding market.

The visitor numbers are staggering on their own, but are also fundamentally re-shaping Korea's tourism industry. Whereas Chinese visitors in 2012 comprised 23% of all visitor arrivals to Korea, so far in 2014 they account for 40% of all inbound tourists.

The economic impact is probably too big to be actually understood. But with large size comes risk from effectively betting the house on one source market that – as other countries have found – can rapidly change due to a number of circumstances. 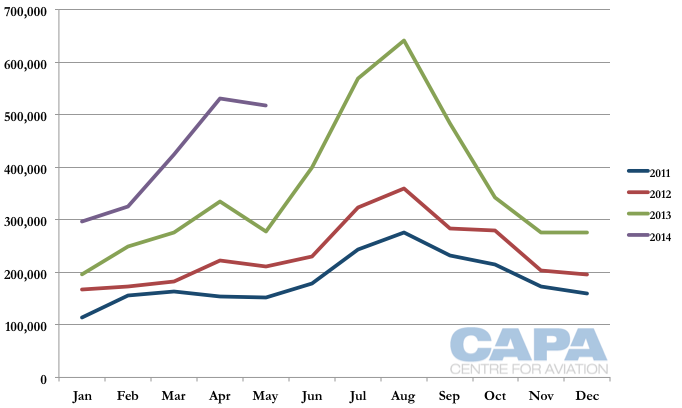 Korea is one of a handful of markets (Hong Kong, Japan and Macau are similar) where options for sixth freedom flights to China are few and impractical, largely leaving the market to point-to-point operators. The Korea-China market is comprised of scheduled flights under a constrained bilateral but also a charter sector that has grown as Korean carriers – especially LCCs – have operated effectively regular flights under the charter banner. China has now clamped down on this practice, imposing restrictions on what qualifies as a charter flight.

The Korea-China bilateral was expanded in May-2014, but this mainly added flights to second and third tier Chinese cities, where yields tend to be lower. Even then the addition was rather small and certainly less than Korean carriers could fill.

Korean Air is adding three weekly flights to Guangzhou, but the outbound China flight will depart Guangzhou around 01:00 and arrive in Korea at 06:00. While the times may seem off-putting, they are what slots are available, and gives an indication of the demand that Korean Air expects despite the times. (Overnight short-haul services can be popular for Chinese tourists as they see the flight allowing them to maximise time and minimise hotel nights.) Korean Air and Asiana are the largest carriers by far in the market. 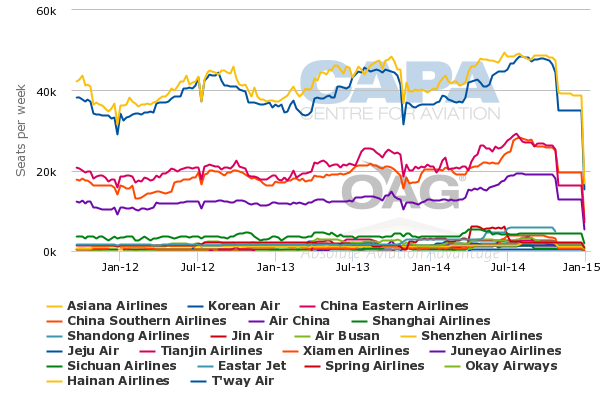 Japan is rebounding from 2012 turmoil, but still smaller than Korea

Chinese visitors to Japan declined sharply in Sep-2012 due to political differences between China and Japan over disputed islands. The first eight months of 2012 experienced record inbound tourism figures. Those highs, combined with the lows in the last five months of the year, still constituted 37% growth. Growth in 2013 was down but still recorded an 8% decrease.

A rebound occurred  in Sep-2013 and has carried through since, with the first five months of 2014 experiencing a 91% increase. But even at its peak in 2012, the 1.4 million Chinese tourists that visited Japan were only half Korea's 2.8 million in 2012 - despite Japan being much larger. 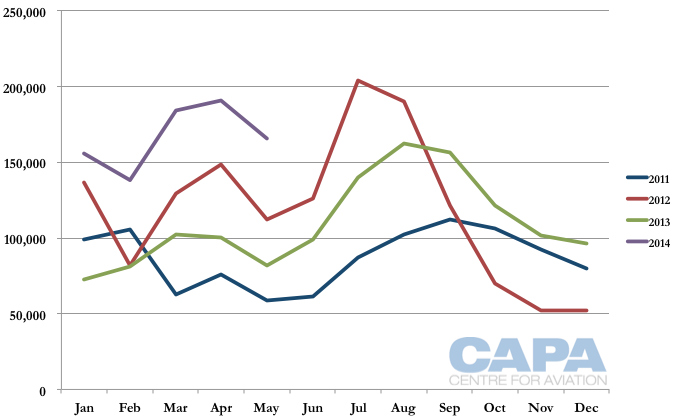 Korea has won Chinese tourists with duty free shopping (and general shopping), cultural placement in movies as well as a less-orchestrated general interest in Korean culture. Korea is also a popular stopover point for passengers taking Asiana or Korean Air to North America. Japan is more expensive but optimists see tremendous growth given the vast swathes of the country yet to be developed for tourism.

China Eastern and Air China, the two largest carriers between China and Japan, are restoring their Japanese capacity to pre-crisis levels while China Southern for now remains down. ANA and JAL have increased their capacity slightly. 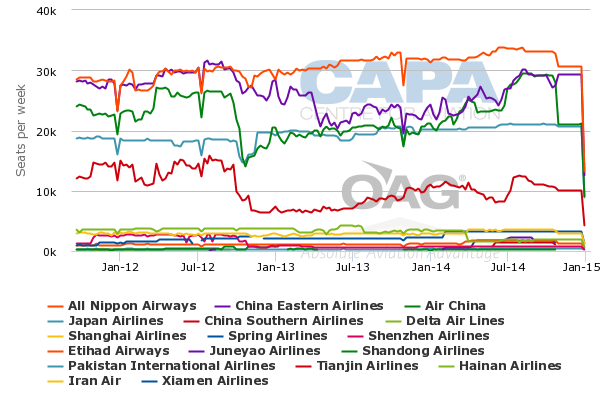 Hong Kong's visitor arrivals via air from mainland China grew 20% in 2013 to 4.6 million, faster than the 16% growth observed in 2012. This includes only visitors who arrive by air; the vast majority do so via land border crossings in northern Hong Kong. The number of visitors by air is only available on an annual basis, so we are unable to see change in 2014's performance.

However, an approximate indicator can be overnight visitors. (Hong Kong has many same-day visitors from around the Pearl River Delta.) Overnight visitors to Hong Kong in the year to May-2014 are up 16%, slower than the overall (same-day and overnight) 18% growth. The Hong Kong Tourism Board identifies that growth in mainland visitors is slowing as competing destinations liberalise visa policies, making it easier to travel elsewhere.

Inbound Chinese visitors by air to Hong Kong: 2011 through May-2014 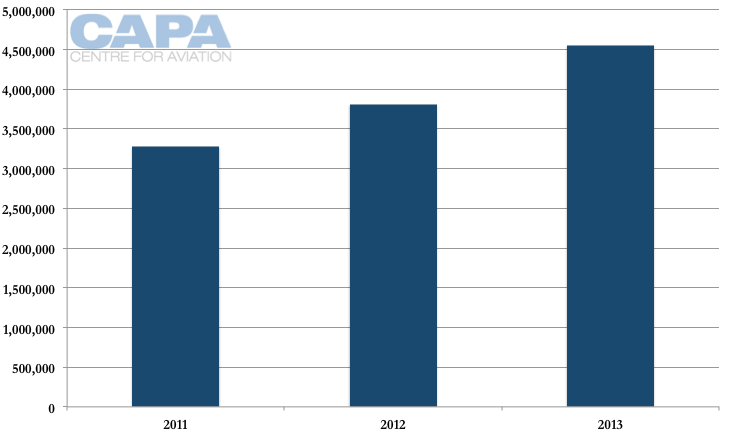 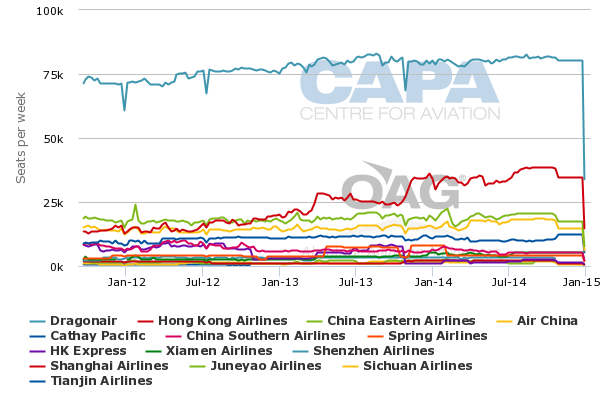 Macau is the 11th largest destination for international/regional seats to/from mainland China. Macau's principal interest for Chinese is its proximity (it shares a land border) and its plethora of casinos (with revenue higher than in Las Vegas) compared to mainland China, where gambling is illegal.

China is trying to push Macau to diversify, such as through MICE, shopping and entertainment sectors, but gambling remains its main draw. Only a fraction of visitors arrive by air, where Air Macau (partially owned by Air China) accounts for approximately 65% of the market. 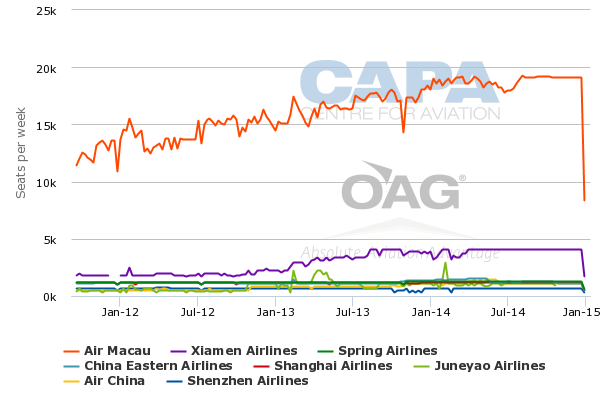 Air Macau once had a less than enviable reputation, but since Air China has exercised greater control the airline has turned itself around and grown. Air Macau has disadvantages, such as a higher cost base than that of a mainland Chinese airline. Further, Air Macau needs to cater to the leisure segment, which wants to depart mainland China in the morning and return in the evening, requiring Air Macau to incur costly overnight parking fees.

In the first five months of 2014, overall mainland China visitors are up 14% while those visiting via the airport are up 20%, consistent with the growth Air Macau put in over 2013 and so far in 2014. However, this is slower than recent years: Mainland China airport arrivals were up 25% in 2013, 21% in 2012 and 24% in 2011. China's anti-corruption and austerity campaigns are likely impacting arrival figures.

Taiwan continues to be an idealised destination given ties and cultural familiarity. The increasing number of non-stop cross-Strait flights is single-handedly propelling Taiwan's tourism sector, which remains under the radar in most other markets. However, cross-Strait flights remain heavily regulated. Taiwanese carriers fear liberalisation will occur before slots are available at key mainland China airports, allowing mainland Chinese carriers to use existing slots to mount new services while Taiwanese carriers cannot. Cross-Strait flights are the highest-yielding for carriers, and in 2013 private carriers Juneyao and Spring Airlines were able to enter, albeit with a limited schedule.

Taiwanese carriers – namely China Airlines and EVA Air – are the two single largest carriers in the China market. They also struggle with the fact that they are unable to transfer mainland Chinese passengers beyond Taiwan. The long-haul ambitions of China Airlines and EVA Air will receive a significant boost when they are able to conduct sixth freedom traffic ex-China. 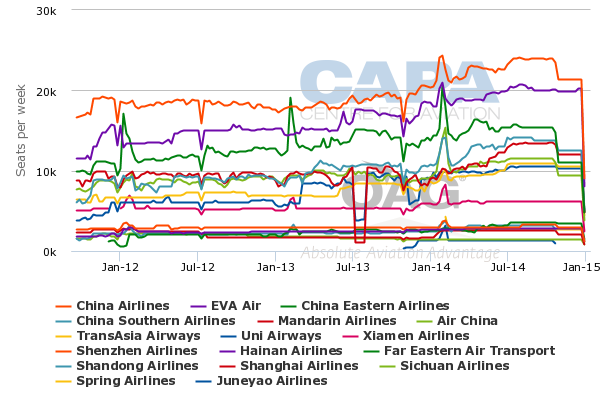 The experience of Taiwan and Korea in recording massive growth from mainland China is an indication of what other countries could expect to experience (to varying degrees) when there is alignment with tourism forces.

Japan, however, provides a reminder of what can happen when any force – within or outside a country's control – impacts tourist flows. Following Japan's Prime Minister Abe's support for a doubling of inbound tourism by 2020, Chinese tourists will have to become a significant factor. Without significant growth from that source - and Korea provides a barometer of the potential - Japan's goal has only the slimmest of chances of being achieved.

Southeast Asia provides a more recent and stark reminder of the effects of unpredictable forces. It is this region the second part of this report will focus on.