Asian air cargo in a rut: despite all issues, freighter fleet flat but finally starting to decrease

The definition of insanity is repeating the same action but expecting a different result. This is where Asia’s airlines partially find themselves about air freight, one unifying – albeit pessimistic – theme across the region. The freighter fleet at Asia’s major airlines is largely unchanged at 135 aircraft, down from 2012’s peak of 148 aircraft but up from the 133 in 2006.  Korean Air, China Eastern and Cathay Pacific have made the largest net additions while EVA Air and Singapore Airlines are alone in making net decreases.

Some airlines have made changes to beat the odds on insanity. Older and inefficient aircraft like the MD-11 and 747-400 BCF have been replaced by newer models such as the 747-8F and 777-200F. Although welcome, these efforts alone cannot sustain the industry. The sheer aircraft numbers mask lowered productivity, generally weakened load factors and yields, competition from outside the region and growing bellyhold capacity. Of eight airlines studied, four had lower freight capacity in 2013 than 2012.

This reports looks at Asia’s eight main carriers with widebody aircraft and which report statistics on the fleet (Air China, Singapore Airlines, Asiana, China Eastern, EVA Air, China Airlines, Korean Air and Cathay Pacific). Notably China Southern does not report freight aircraft-specific statistics and are excluded from the fleet analysis. Yangtze River Express is excluded due to its mainly short-haul and narrowbody network while historical statistics are not available for Nippon Cargo Airlines. Airlines typically report parked aircraft alongside the active in-service fleet.

Airlines like Jade Cargo and JAL that had freight aircraft in 2006 but not 2013 are also excluded. While Jade and JAL took freight supply out of the market, the industry still faces a predicament, and indeed one more recent than the exit of Jade and JAL. 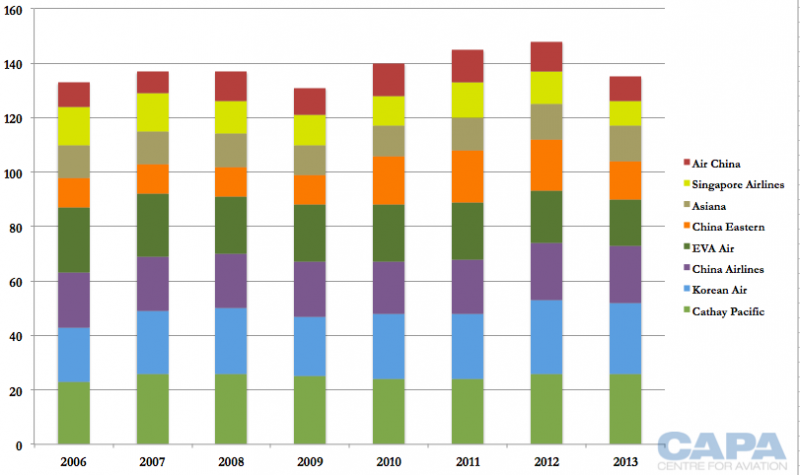 EVA Air has shrunk its fleet from 24 freighters in 2006 (when it was then the largest by aircraft fleet size) to 17 in 2013, making the fourth largest. EVA Air told Bloomberg it plans to further decrease its dedicated freighters to less than 10 by 2017 as it retires MD-11Fs (it is the last remaining major Asian airline operating MD-11Fs). Cathay Pacific and Korean Air grew to have the largest number of freighters in 2013. Elsewhere, Singapore Airlines decreased its cargo fleet from 14 in 2006 to nine at the end of FY2013.

By the end of 1QFY2014, SIA had further reduced its freighter fleet to eight. Cathay around 2011 had planned for upwards of 38 freighter aircraft in 2017, but is now looking at a figure closer to 20.

Between the freight aircraft peak in 2012 and 2013, five airlines reduced their number of freighters while three (Asiana, China Airlines and Cathay) kept their fleet flat. China Eastern made the largest change by withdrawing a net total of five aircraft, comprising its three remaining MD-11Fs and two of its last three A300Fs.

Net changes in freight aircraft by airline: 2013 compared to 2012 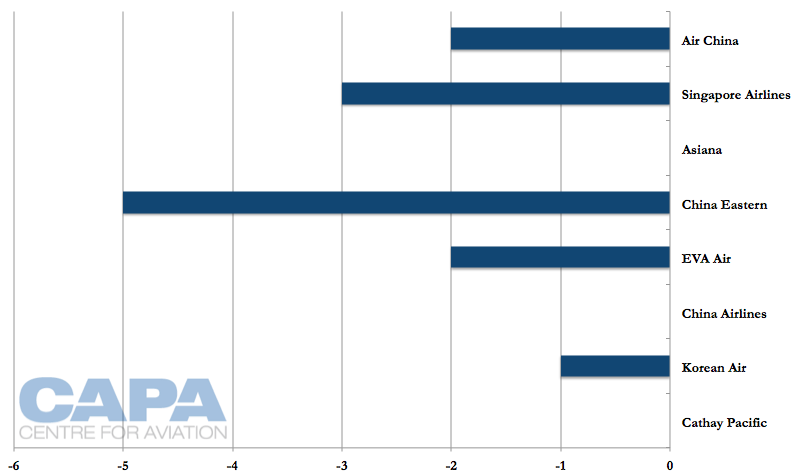 From 2006 to 2013, five airlines made net additions to their freight fleet while two made decreases (EVA Air and Singapore Airlines) and one kept its fleet flat (Air China).

Net changes in freight aircraft by airline: 2013 compared to 2006 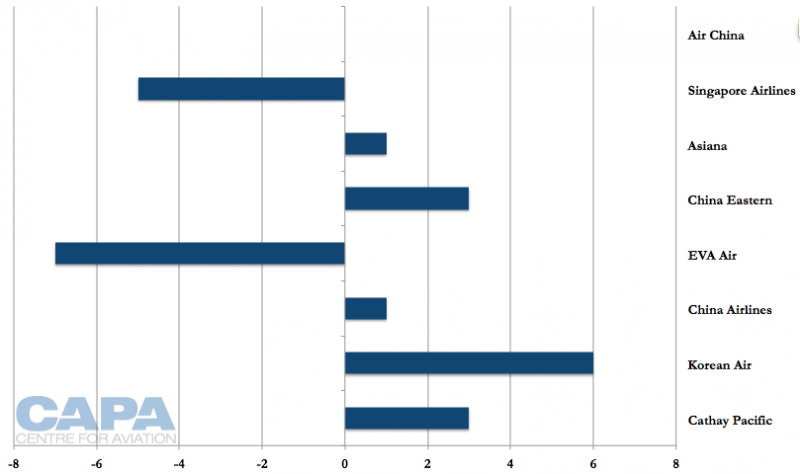 Growth of passenger and freight aircraft by airline: 2013 compared to 2006 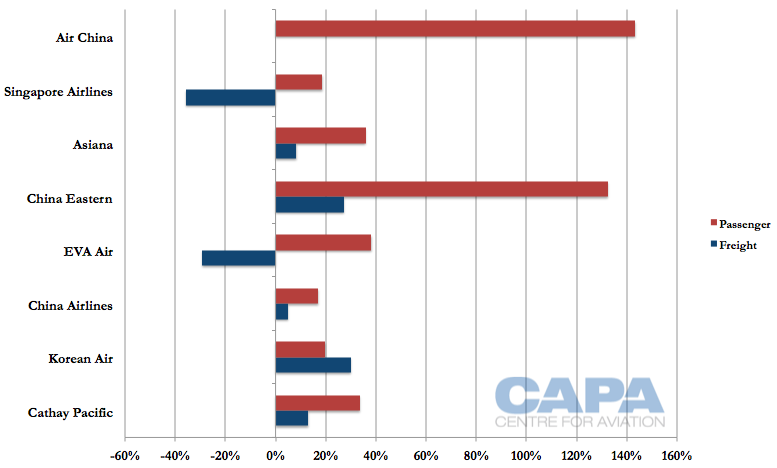 To respond to the weaker freight environment, some airlines have reduced their freighter fleet while others are pinning hopes on efficiency improvements to lift them out of the rut by using newer and more efficient aircraft, thereby reducing operating expenses. (This section excludes Air China’s freight fleet as the airline did not historically list aircraft by type.) 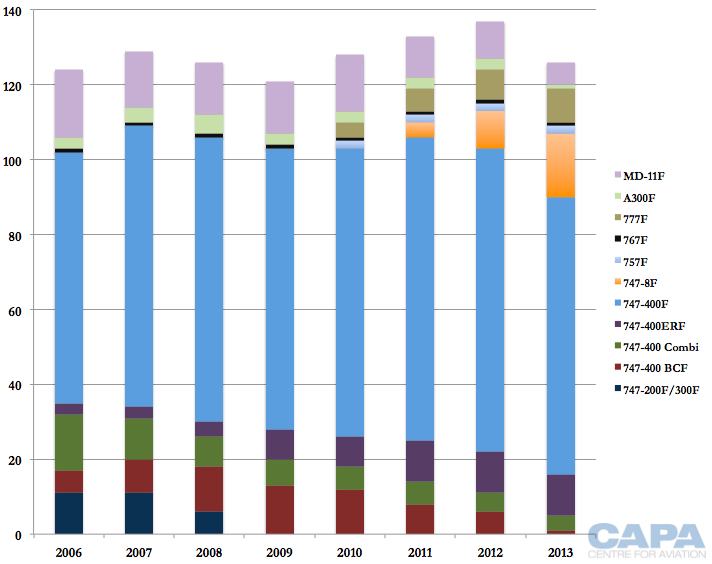 The 747-400BCF was a quick solution to rising cargo demand but increased fuel prices and weaker demand saw it quickly withdrawn. Some airlines do not break out 747-400 variants, but of the airlines that do, there was a peak of 13 -400BCFs in 2009 that quickly dwindled to one in 2009. The combi has also lost favour while the -400ERF grew in popularity until 2012 when -8 deliveries ramped up. 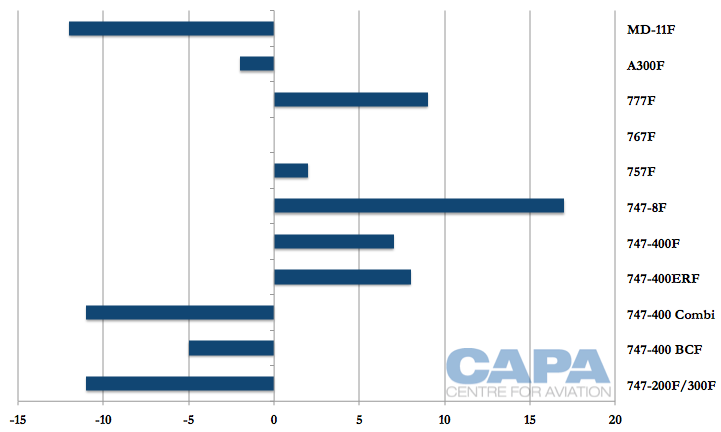 Chinese airlines can be expected to add older but smaller models like the 757 to respond to the country’s growing parcel market. For example, Air China (which again was not included due to historical data limitations) added one 757 in 2013 with plans for more in 2014. 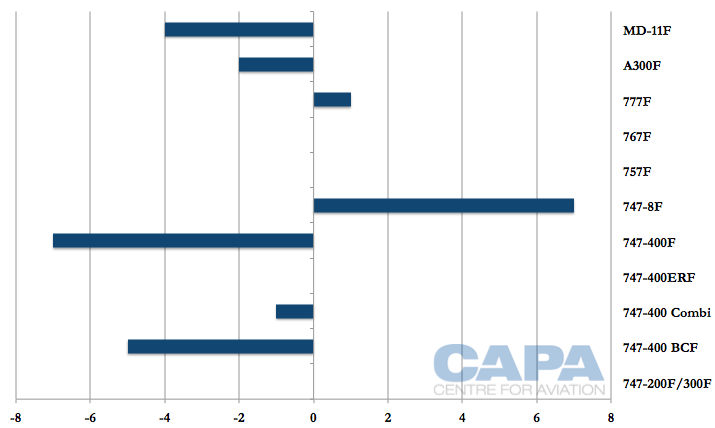 The four largest freight carriers in 2006 based on FTKs – Korean Air, Singapore Airlines, Cathay Pacific and China Airlines – carried less cargo in 2013 than they did in 2006. (Korean Air's drop is partially due to A380s with smaller bellies replacing passenger 747-400s.) Meanwhile the four smallest carriers in 2006 – EVA Air, Air China, Asiana and China Eastern – carried more cargo in 2013 than they did in 2006, with EVA Air seeing the largest growth. Cathay and SIA have seen the largest decreases.

It is worthwhile to note the two mainland Chinese carriers in this study are seeing growth while network freight carriers (which had been relying on China) are suffering decreases, suggesting Chinese carriers are capturing back traffic that otherwise went via other countries. 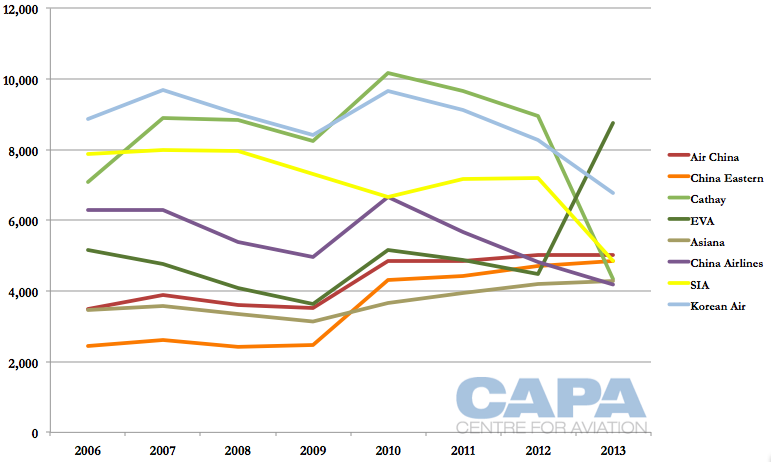 Most cargo load factors in 2013 were comparable to 2006, often with limited changes in the intervening years. But some carriers stand out. Air China, China Eastern and EVA Air have made significant improvements. Cathay and, to a lesser extent, Asiana have performed more weakly. 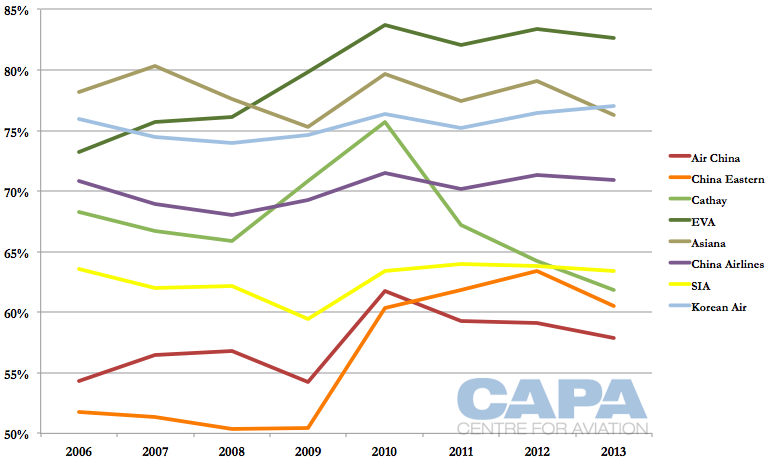 Freight yields lower than in 2006, except for Asiana and Cathay

Financial results of air freight are limited; only Singapore Airlines discloses a profit/loss (the latter more common as of late) for its freight division. But yields can be an indicator, with a survey of indexed performance showing carriers posting weaker yields in 2013 than in 2006. Exceptions are Asiana and Cathay Pacific. However, it should be recalled Asiana's load factor has weakened and Cathay's drastically so, suggesting the two are trading load factor for yield. 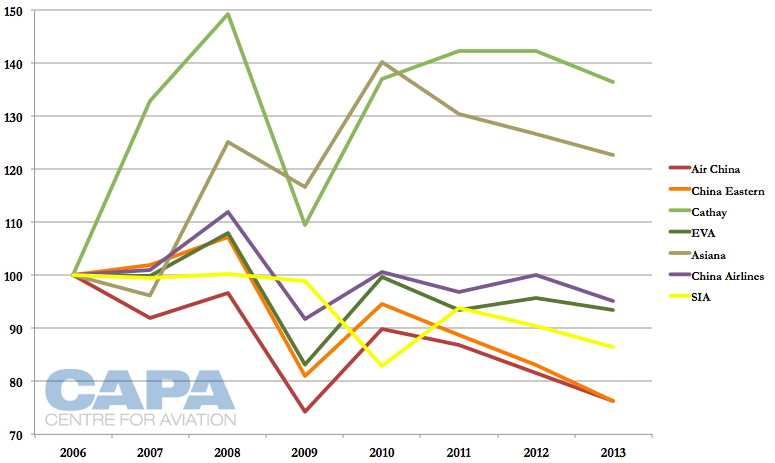 Source: CAPA - Centre for Aviation and companies
Note: Korean Air excluded as it does not report annual cargo yields

Freighter aircraft utilisation rates are down

The number of freighter aircraft in Asia may show little change, but utilisation of those aircraft is down, further adding to load factor and yield challenges. For most airlines, only anecdotal evidence is available. Asiana and Cathay however provide statistics, Asiana for all of its freight aircraft and Cathay for only its active 747 models. Both show a constant decline in utilisation with a blip during the brief 2010 upturn. 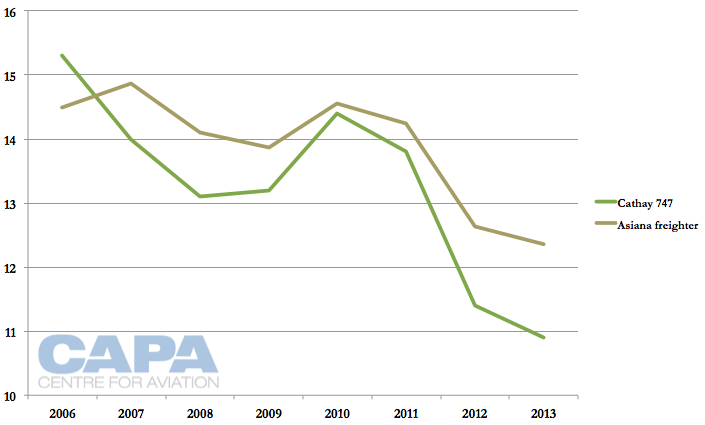 So there are clearly excess aircraft. In Oct-2013 Cathay operated 21 of its 23 freight aircraft (parked were one 747-400F and its only remaining 747-400BCF). By Apr-2014 (latest information available) Cathay had taken delivery of three more 747-8Fs, growing the freighter fleet to 26. But the new 747-8s replaced 747-400Fs, which in turn became inactive but still in the fleet. So Cathay's in-service fleet remained flat at 21 but parked aircraft grew from two to five. Efficiency was improved while capacity increased due to the 747-8F’s larger handling capability.

The cash cow has moved on. Airlines are beginning to recognise this

Despite weak signs, some growth is needed to match an increasingly disparate supply chain. For example, the Pearl River Delta was once the major story and made easy pickings for airlines that flew into Hong Kong with passenger aircraft holding ample belly room. But in order to secure that now cargo airlines must reach further inland in China – or go to growing cargo markets like Vietnam. Taiwan's carriers have been impacted as large electronic device manufacturing has moved elsewhere.

Airlines could be partially accused of having a similar plan and expecting a remarkably different outcome. But the operating environment has been changing, and the thought was some adjustments combined with new markets and trade patterns, and a degree of hope, would produce different outcomes. Accolades in the industry are not about who is performing well but who is “the best of the worst”.

The pain is sometimes self-inflicted, from delayed responses to passenger aircraft growth cannibalising cargo markets. Cathay, for example, has ended regular Manchester freighter service in advance of forthcoming passenger flights to Manchester. At European carriers this is taken to the extreme, with Air France-KLM reporting in Jul-2014 that dedicated freighters accounted for only 28% of group freight capacity in 2013 (with the balance on passenger aircraft), down from 53% in 2008/2009. Air France-KLM's 18 freighters in Jun-2014 will be reduced to 10 by the end of the year. IAG earlier in 2014 ended (sub-contracted) dedicated freight operations.

Improvements have been needed all round. After stagnation to see if a recovery would occur, airlines have (begrudgingly - after all this was a nice cash cow at its peak) accepted a changed environment, one that will look different if and when a recovery emerges. There have been responses, but more improvements still to be made. It is difficult to accept a changed market and be willing to make one of the early moves.

Pride rather than logic may still pervade the Asian passenger business, but there is certainly no room for it in the cargo sector.