The political situation in Thailand is impacting arrival figures there while Malaysia has seen a sharp downturn due to the MH370 incident, with many Chinese believing conspiracy theories while others are avoiding Malaysia in a de facto protest. The cumulative impact is a 20% decline in Apr-2014 arrivals, the latest available.

Singapore has been caught up in this anti-Southeast Asia feeling, experiencing a 39% decline in Apr-2014 and 17% for the year so far – an even  larger decline than in Malaysia. Vietnam-China tensions flared in May-2014, but Jun-2014 arrival figures still show 6% growth in Chinese tourists, although this is well down from the 43% growth in the year to May-2014.

This is the second part of a two-part report. The first looked at Chinese inbound markets in Northeast Asia.

Overall Chinese outbound visitor numbers are known to be growing but the exact amount is difficult to say due to the inconsistent nature of Chinese statistics. A bellwether is the international performance of Chinese airlines, and specially Air China, China Eastern and China Southern, which have the largest international capacity of China's airlines.

The three are reporting growth – typically in excess of 10% – in regional (Hong Kong/Macau/Taiwan) and international passengers. 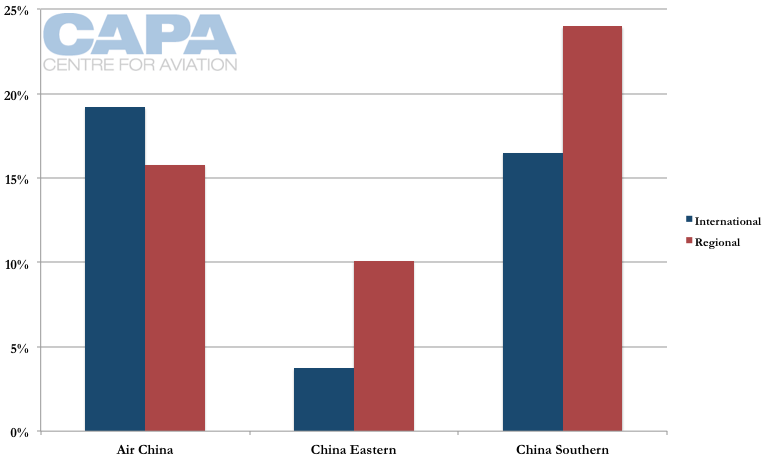 It is evident Chinese short-haul tourists are trading Southeast Asian destinations for Northeast ones. But in what quantity is difficult to say. Historical growth rates vary considerably owing to visa liberalisation, air service expansion and other factors. The short-haul nature of many markets (mainly in Northeast Asia) means sixth freedom options are limited and impractical, making markets dependent on non-stop flights.

Chinese tourists in Southeast Asian markets could be decreasing due to political relations but also individual preferences: Korea's culture continues to attract Chinese visitors (especially with thanks to television shows) while Japan is seeing a rebound; Chinese who went to Southeast Asia in 2012 or 2013 in protest of Japan may now elect to visit Northeast Asia and have an expanded range of flight options to do so.

Northeast Asia is achieving higher Chinese visitor arrival rates than in 2013. Japan's figures are distorted due to weak performance in 2013, but 2014's figures have rebounded above 2012, despite territorial disputes.

The exception is Macau, which is reporting slower growth, likely linked to China's anti-corruption and austerity measures. In media reports Macau has been linked to government-funded junkets, making travel there more conspicuous.

Year to date changes in Chinese visitor arrivals to select Northeast and Southeast Asian countries/territories: May-2013, May-2014 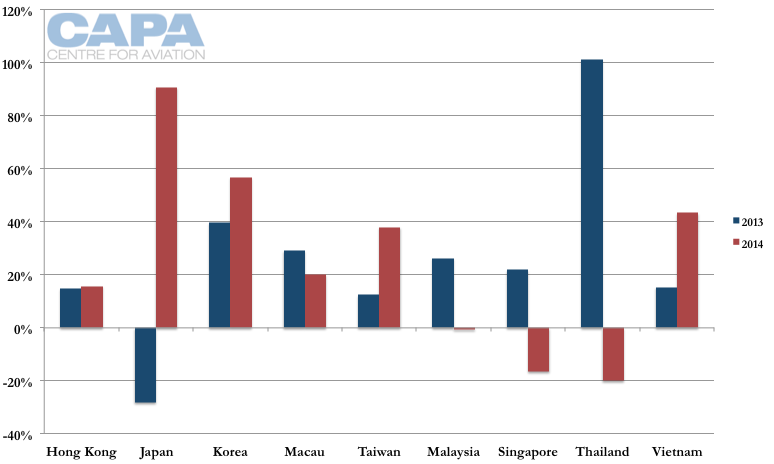 Malaysia reported a 19.5% decrease in mainland Chinese tourists in Apr-2014, the latest data available. This is consistent with the backlash Malaysia experienced from China over the MH370 tragedy, with Chinese opting to avoid all of Malaysia even if reaching the country on airlines other than Malaysia Airlines. Malaysia as a country has wrongly become linked to conspiracy theories about MH370. In some instances Chinese travel agencies have an unofficial ban on selling tickets to Malaysia.

However, Malaysia had experienced slowing growth prior to the MH370 incident in Mar-2014. January and February in past years showed strong growth individually or when averaged out; the changing time of the Lunar New Year distorts year-on-year comparisons. 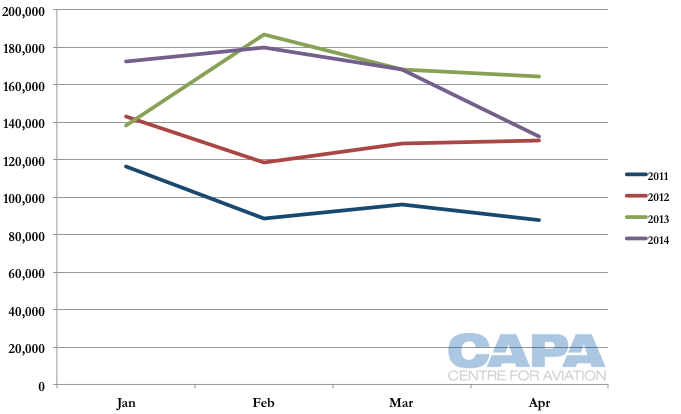 Complicating the capacity changes and future growth is the increased capacity from AirAsia and AirAsia X, which have lower cost bases than MAS or Chinese peers and give them stronger prospects. As such, MAS – and perhaps China Southern – may have more limited growth in the future due to AirAsia and AirAsia X's increase. This could make it difficult to separate out the MH370 impact on MAS from its ambitious local competitor.

AirAsia X expects its China revenue to overtake Australia's and the AirAsia Group has a more neutral branding that is distanced from Malaysia, unlike MAS – a potential factor depending how long the MH370 response lasts. With a wide and growing range of connections, AirAsia and AirAsia X can sell points beyond Malaysia. 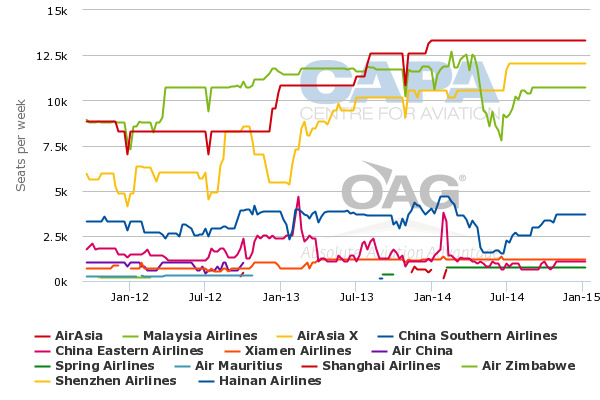 The growth from AirAsia and AirAsia X will not be enough to allow Malaysia to offset MAS and China Southern's decreases. The Malaysia-China market dipped in Jun-2014 and early Jul-2014 to below 2013 levels but still above 2012 levels.

Tourism figures show inbound Chinese tourists in Apr-2014 below 2013 levels but slightly above 2012 levels; declines past 2012 levels are likely. 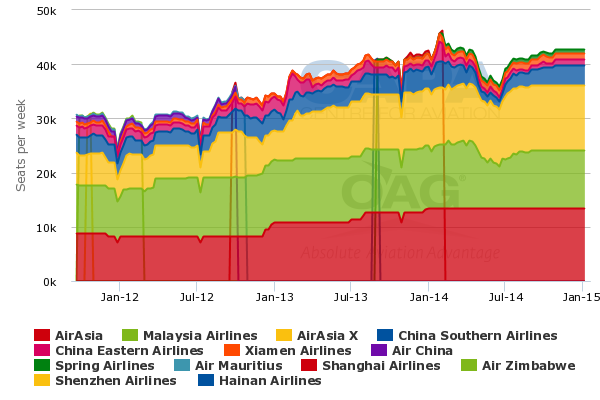 Singapore like Malaysia has only released data through Apr-2014, and based on this data Singapore is a larger concern than Malaysia. Jan-2014 and Feb-2014 Chinese arrivals combined were down 6% compared to Malaysia's 8% growth. In 2013, January and February arrivals were up 23%, and in 2012, 26%. 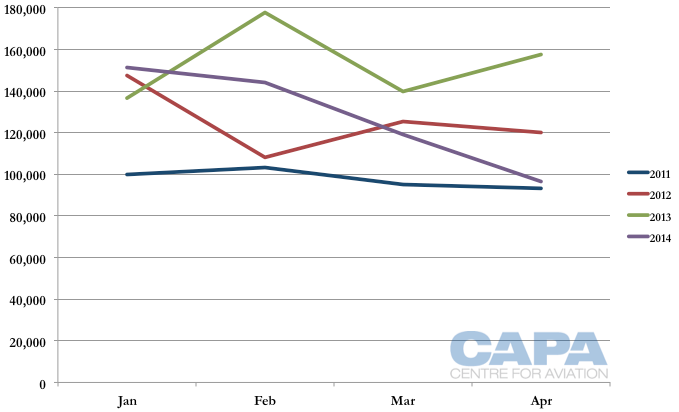 Gambling, especially at Marina Bay Sands, was a big draw. Now with China exercising closer scrutiny on government official junkets and corruption, Singapore has lost some attraction. With Chinese tourists then avoiding Malaysia in response to MH370, only Singapore was left on the Sinmathai itinerary, and was seldom the primary interest for many visitors, so they have skipped the three altogether.

Singapore is not taking it lying down. In Jun-2014 Singapore launched a SGD1 million (USD800,000) market initiative to woo back mainland China visitors. Official Chinese media have promoted Singapore as a destination and an especially viable alternative to Malaysia and Vietnam, with which China is also involved in territorial conflict. The articles, however, failed to note the decline in visitor numbers so far this year.

The sharp downturn in visitors is a contrast to the slight 1% decrease in overall seat capacity for 2014 compared to 2013. The largest impact is from China Eastern, which is decreasing China-Singapore capacity by 18% in 2014 compared to 2013, according to OAG. SIA, the largest carrier, is increasing capacity by 3% while regional arm SilkAir is growing 10% and will be the third largest carrier in the market (second largest for a few weeks around Aug-2014).

Jetstar Asia has cut capacity by 26% while Tigerair is growing by 21%. Spring Airlines in Apr-2014 launched a daily Shanghai Pudong-Singapore A320 service but in May-2014 decreased this to three weekly. 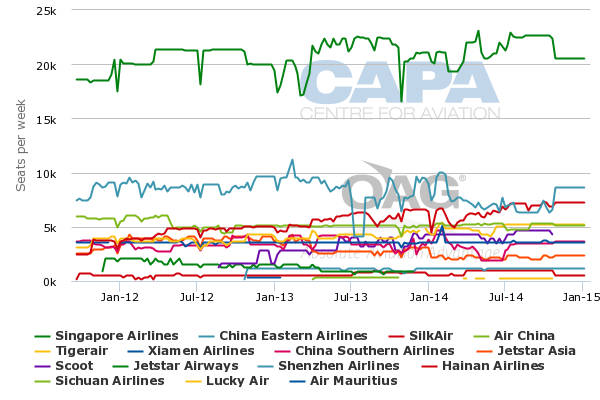 Thailand suffers the largest drop in visitors from China

Thailand has understandably seen a drop in tourist arrivals given the domestic political situation. In the year to May-2014, visitor arrivals were down 6%, but this is not across the board. Visitors from Europe for example are actually up 7% while the Americas shows growth below 1%. Oceania is flat.

This could be attributed to a number of possible factors: nonchalance of the visiting tourists; the generally favourable media coverage Thailand has received, as well as popular tourist areas outside Bangkok intentionally being left unaffected. Further, long-haul visitors tend to book holidays in advance, making them more costly to cancel once the local environment changes, while short-haul visitors book closer to departure.

China is the single largest cause of the decreased visitor arrivals, with approximately 400,000 fewer Chinese visiting Thailand in the first five months of 2014 than 2013. Proportionally, however, China's 20% decline (well above the average 6% decline) is eclipsed by Taiwan's 27% decline and Hong Kong's 39% decline.

Travellers in these markets often travel in groups arranged by agencies, which have cancelled tours. In mature markets travellers tend to make decisions on their own, relying less on group bookings. Korea will potentially overtake Thailand as the largest outbound market for Chinese travellers. There should be an increase from Hong Kong following the Jul-2014 lifting of a travel alert to Thailand.

Year-on-year changes in inbound visitors to Thailand: Jan-2014 to May-2014 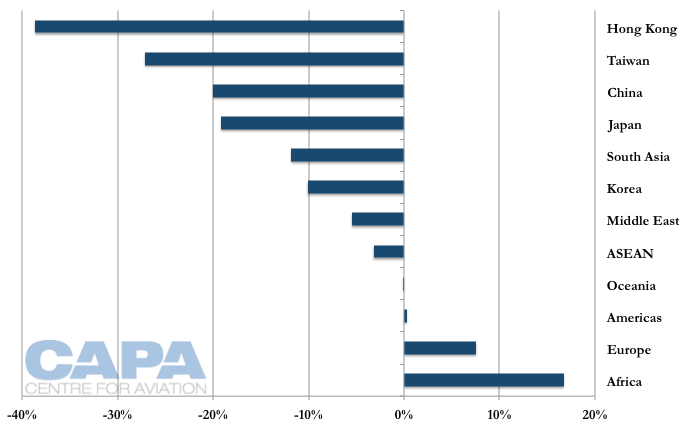 Source: CAPA - Centre for Aviation and Ministry of Sports and Tourism

Despite the decrease in Chinese visitor arrivals, the China-Thailand market is due to see an increase of 6.8% seats in 2014, according to schedules filed with OAG. Dominant carrier Thai Airways is planning modest growth, with sharper growth from China Southern and Thai AirAsia. 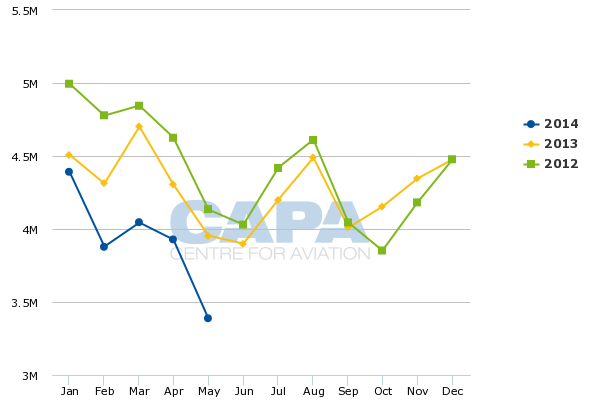 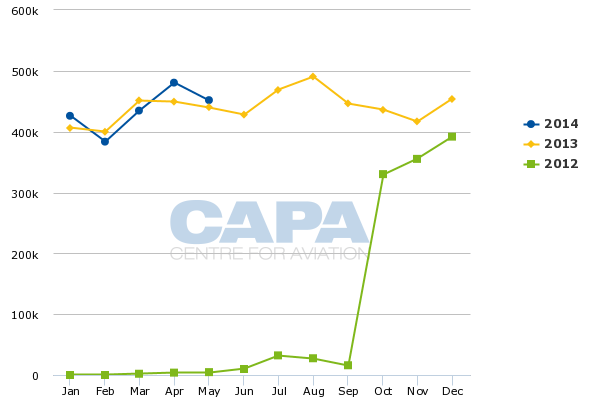 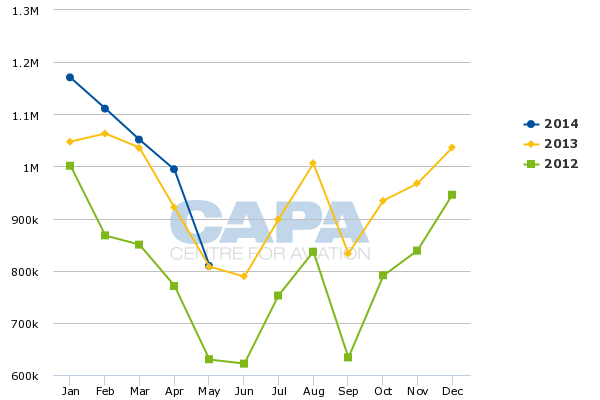 The Vietnam-China market has weakened since a May-2011 incident when China deployed an oil rig in the South China Sea, a section of water it deems as its territory while Vietnam believes the territory is theirs. There were extensive and sometimes violent anti-China protests in Vietnam that received considerable media attention in China. There were also evacuation flights of Chinese nationals from Vietnam.

This incident may prove to have shorter-term impacts. May-2014 Chinese visitor arrivals in Vietnam were up 31% and 6% in Jun-2014, the first month for which the full impact could first be felt.

Unlike the effects of the Japan-China dispute, visitor arrivals in Vietnam are posting moderate growth compared to an immediate decline. Jul-2014 figures should be down by virtue of lowered capacity, but provided the political situation continues to hold steady this should be the limit of weakened figures. 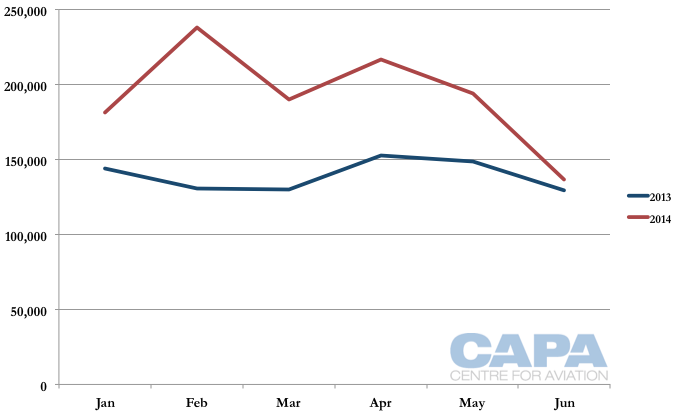 Source: CAPA - Centre for Aviation and Ministry of Culture, Sports and Tourism 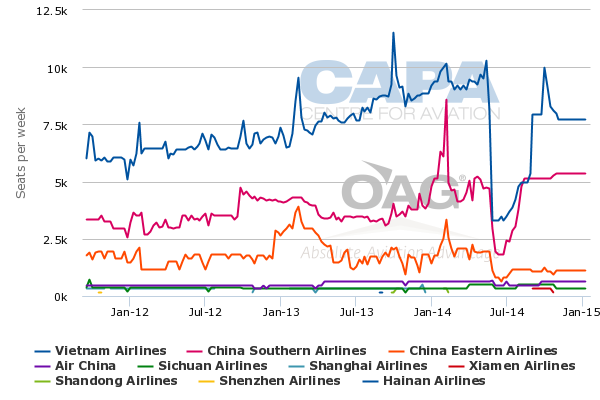 North Asia is benefitting from a series of events which currently seem to be linked to Chinese visitor arrivals decreasing in core Southeast Asian markets.

These Asian markets have been the early recipients of the largest Chinese outbound flows and have quickly adapted to a recognition that the China market will progressively swamp all others. Consequently, with such rapid and substantial growth, any slowdown can quickly have a pronounced impact on any inbound market. This looks very likely to be a feature of this new tidal wave of growth, no matter what market. Chinese media and shifts in political winds can abruptly - but often temporarily - turn off traffic flows.

So, for tourism authorities in the forefront of this expansive growth, it will be wise to adopt risk management strategies that are more thoughtful than they have previously needed. There is little doubt that in the long term Chinese tourists will change the face of global tourism. But managing the short and medium term blips will be a big part of a China tourism strategy.