A new phase begins for Jin Air, the wholly owned low-cost subsidiary of Korean Air. Following steady growth that saw Jin Air grow to 11 aircraft after six years, the airline plans to double its fleet by the end of 2015 in a bid to become Korea's largest LCC, according to Jin Air SVP Marketing Emily Cho. The competition is both domestic and international. In Korea, independent Jeju Air expects to carry its 20th millionth passenger in 3Q2014 and have a fleet of 25 aircraft in 2016.

North Asian LCCs have been growing in Korea's international market, with 12% of seat capacity held by LCCs in 1H2014. And now more Southeast Asian long-haul LCCs, such as Thai AirAsia X and NokScoot, are poised to enter from Thailand, complementing AirAsia X and Scoot. Korea's LCCs are also finding themselves limited in destination choices; their all-narrowbody fleets extend their reach only so far in Southeast Asia – and cannot reach potential new markets like Hawaii or Australia.

Jin Air is seeking to accelerate growth significantly. After adding one or two 737s every year since its first flight in 2008, Jin Air plans to double its fleet from 11 737s in Jun-2014 by the end of 2015, Ms Cho says. There will be additional 737 aircraft and Jin Air will announce two more destinations later in 2014.

Some of the additional aircraft could be widebody aircraft to support a new long-haul venture, although this is unconfirmed. Ms Cho says Jin Air will push international expansion as Korea's inbound tourism increases popularity, ushered in by cultural interest – the "Korean Wave". "Korea is becoming so popular," Ms Cho says. "It is a duty as a Korean company to promote Korea, and Jin Air."

Visitor arrivals, partly driven by new LCC operations, to Korea were up 29% (to 1.3 million) year-on-year in Apr-2014, the latest period for which data is available.

Korean and foreign LCCs account for 12% of international seats to/from Korea in 1H2014, according to OAG data. 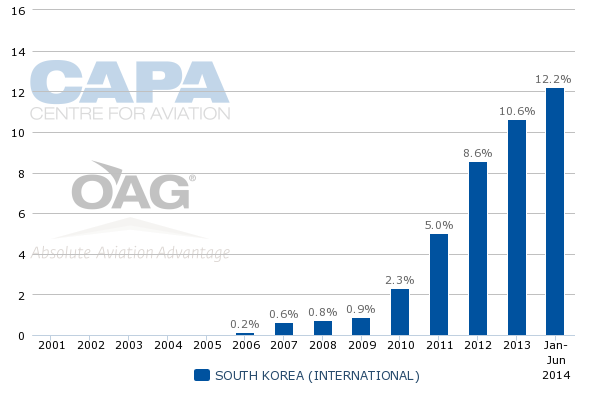 Jin Air's fleet has grown steadily and generally in line with Asiana's partly owned Air Busan, which has consistently had about one more aircraft than Jin Air every year. In 2012, Jeju Air began to growth faster than Air Busan and Jin Air, and faster than privately owned Eastar Jet and t'way, which have not always had a secured outlook. 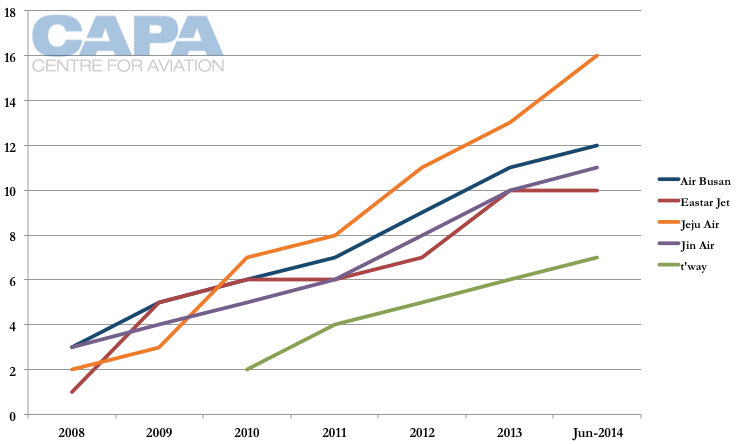 If Jin Air achieves its high growth targets and continues that in 2016, Jin Air will likely surpass Jeju Air in size, although Ms Cho notes Jin Air's focus is quality and sustainability over sheer size. (A long-haul operation would mean lower passenger numbers than Jeju Air due to longer sector lengths.)

Air Busan in Apr-2014 received its 12th aircraft, an A321, and during 2014 expects to retire two 737-500s while introducing three more A320 family aircraft for a total fleet at year end of 13 aircraft. Eastar Jet and t'way have not made any recent public comments about growth.

With growth coming from Jin Air and Jeju Air, as well as foreign carriers, Korea will potentially enter a period of over-capacity. Korea's largest source of visitors, the China market accounts for over one-third of all visitor arrivals and is growing at over 50% annually. Further growth will be challenging for Korea's LCCs in China. Only limited expansion was granted in the recent Korea-China bilateral talks and that was mainly to smaller cities that may prove hard to sustain service, even on a low-cost platform. Chinese authorities have also narrowed the definition of charter services, which Korean carriers had been using as periodic de facto scheduled services.

Considerable international growth remains to be unlocked, but the challenge for Korea's LCC is to realise the growth and remain profitable. Besides China services, the customer profile of Korean LCCs has generally been heavily Korean outbound. International marketing has been limited. Websites have been basic, but both Jeju Air and Jin Air plan to make investments in this area.

All of Korea's LCCs are based in Seoul, with the exception of Air Busan based in its namesake city of Busan. However, part-owner Asiana has mooted a separate Seoul-based LCC.

See related report: Asiana could join ANA in having a second LCC subsidiary. While complicated, it could work

The focus for the LCCs will need to be the international market. Korea's domestic market is limited by its geographically small area and convenient and affordable KTX high-speed train. Domestic flights are almost exclusively to and from Jeju, an island where air links are the only main mode of transportation. Korea's Seoul-based LCCs benefit from Seoul Incheon airport not being capacity constrained, unlike other airports in the region.

All of Korea's LCCs see 60% of passengers travel on domestic flights, but this market is becoming saturated while international opportunities are under-exploited. While the LCCs will likely attract a higher proportion of domestic passengers than Asiana or Korean Air (where international passengers are approximately 70% of their totals), a balance is yet to be found. 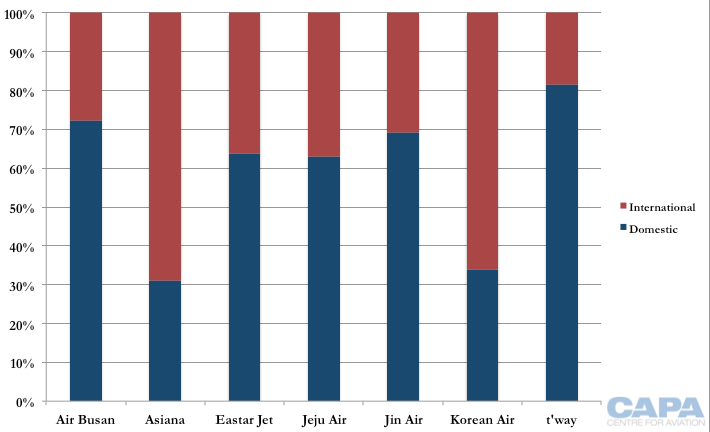 Jin Air in Apr-2014, the most recent month for which data is available, was the third-largest LCC in the domestic market and second-largest internationally, although Air Busan was not far behind. (In the graph below Asiana and Korean Air are excluded as their significantly larger size distorts meaningful comparisons amongst Korea's LCCs.) 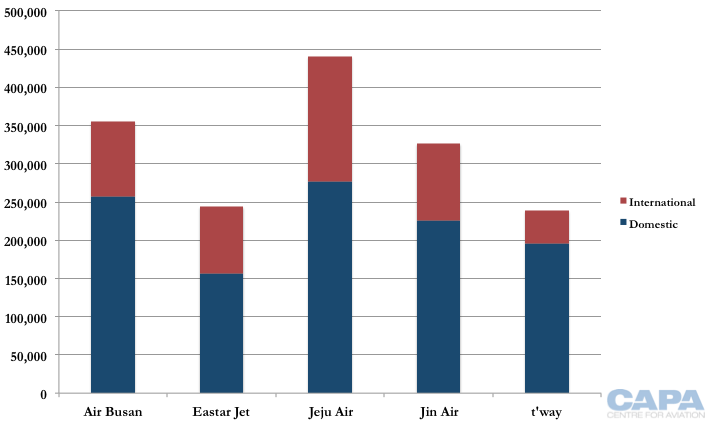 Jin Air in late Jun-2014 expects to announce details of a long-haul operation, although Ms Cho is unable to provide further details at this time. The Chosun Ilbo in Jun-2014 quoted Jin Air CEO Ma Won expressing interest in a long-haul operation as, "The only way to achieve a breakthrough in growth is to offer long-range flights that go beyond Phuket." Although there are still regional opportunities, a long-haul operation would open new markets, as noted above. Jin Air is looking at acquiring 777-200s or A330s.

Jin Air could open entirely new routes for the Korean Air Group, as Jin Air has historically done, or look to take over routes from Korean Air. Australia, for example, is a heavily Korean and leisure-based market. Transfer traffic opportunities for Korean carriers are limited given Korea's large transfer market of China has numerous direct flights, especially on China Southern. Korean carriers have only had a small presence in Australia that has even decreased; Korean Air ended services to Melbourne.

A long-haul low-cost operation would not be unprecedented as Jetstar has a few Japan-Australia services. Cebu Pacific has considered serving Hawaii, although that would be based on carrying expatriate workers and not leisure traffic (as would be a Korean carrier's focus). A long-haul operation may provide the opportunity for Jin Air and Korean Air to coordinate routes and deploy each brand where it will generate the highest return; previously Jin Air has appeared to take a back seat to Korean Air.

European routes could be more challenging given the distances involved, although competition is lighter than from Southeast Asia. AirAsia X mounted and then discontinued long-haul flights to Europe, as fuel prices made its A340 operation uneconomical.

There is comfortably a market in Asia and beyond for Korean carriers to serve with low-cost long-haul flights. The challenge is to make it work. Scoot has found the 777-200 to be too large, although Jin Air may be able to acquire such aircraft at favourable rates from Korean Air. Korean carriers have struggled to form a workable LCC identity.

As Ms Cho says "Koreans say they want a LCC" but do not want the limited service that entails. Korean LCCs have become hybrid operations, although this appears to have worked in limited scale. On a long-haul platform any missed cost-saving opportunities take on great proportions.

Then again, Korean consumers may be unwilling to pay a premium to fly on a Korean LCC rather than a foreign one. That may provide justification for a hybrid model in considering outbound Korean traffic. But if Jin Air wants to tap into inbound visitor arrivals to Korea, the experience around Asia-Pacific – and beyond – is that consumers will tolerate a non-hybrid carrier in exchange for low fares. This is a complicated discussion that will take some years to unfold and will be shaped by Korean consumer demand as they experience more foreign LCCs.

Jin Air will certainly not be the only long-haul LCC to establish in Korea. Air Busan is reportedly considering taking an initial two or three A330s for services to Australia, Hawaii, Turkey and Western Europe. As with Jin Air's possible routes, these are largely point-to-point routes with a heavy leisure bent to them. But in this potential dual-brand strategy, Air Busan would likely operate out of Busan, not Seoul where Asiana's long-haul flights are based.

That would make it more difficult to transfer Asiana services to Air Busan, if that is under consideration. And beyond Air Busan – and maybe other Korean LCCs – there are an increasing number of LCCs in North Asia that will see opportunity to go long-haul, even from China.

As part of Jin Air's international push, it is undertaking a marketing tour – "Lights Off, Delight On" around Asia. A large booth was unveiled at the International Travel Expo Hong Kong, a Jin Air market, and will travel to Macau next and additional destinations later in the year. Ms Cho hopes the effort will boost awareness of Jin Air in foreign markets.

The display familiarises visitors with Jin Air and includes a 270 degree Jin Air brand video with a romantic plot between two characters, one of whom travels on Jin Air. Such large marketing is unusual for a LCC, but underscores how serious Jin Air is to raise its profile - as well as the influence of Ms Cho in the airline's social media and wider marketing activities. IT improvements will also help its website sell more tickets in international markets. 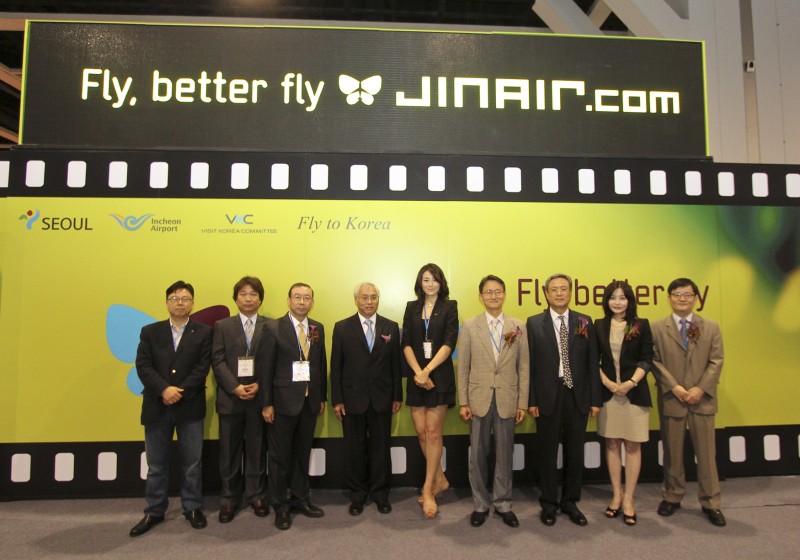 Jin Air profits will be under pressure

Jin Air's growth has been profitable, based on the limited financial statements disclosed by Korean Air. After expected start-up losses in 2008 and 2009, Jin Air was profitable every year through 2012, the most recent year for which data is available.

However competition has had an impact and Jin Air's net profit margin has decreased from 7.9% in 2010 to 3.9% in 2012. This will likely be under further pressure as competition and capacity (and even a long-haul operation) grows. 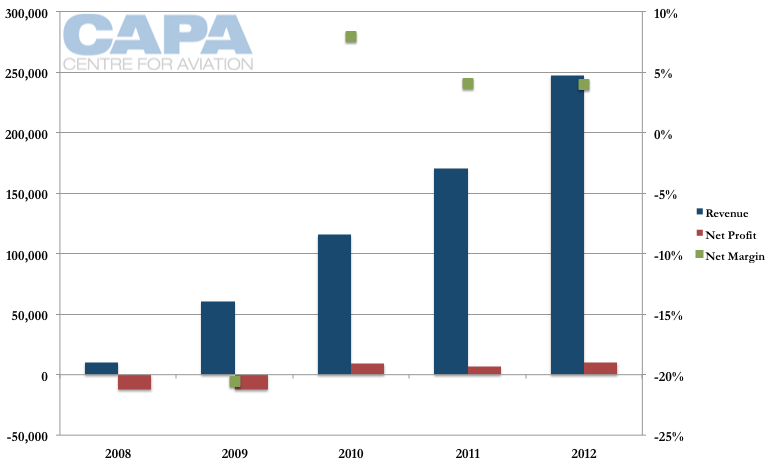 Outlook: more opportunities for short-haul, but Jin Air is taking the lead in long-haul

Korea was the first LCC market in North Asia, and is now poised to have the first long-haul LCC, again replicating Southeast Asia. Korea's LCC market has not become as comprehensive, or low-cost, as Southeast Asia. This has worked in limited scale but is experiencing new challenges as long-haul operations enter the picture.

There is still growth to be unlocked within narrowbody range of Korea, but Jin Air's expansion into long-haul would allow it offer a long-haul product in response to the growing number of low-cost long-haul carriers serving Korea.

It would also distinguish Jin Air from other LCCs, and perhaps allow some network coordination with Korean Air. While Jeju Air appears to be the target of Jin Air's growth plans, long-haul may not be the answer for everyone. The step is a big one, with many new challenges to face.

If combined in a strategically complementary role with its parent Korean - as Qantas-Jetstar have pioneered in North Asian markets - there could be mutal benefits for parent and offspring. For an independent short-haul LCC, the issues become more complex - but the growth (and partnership) permutations become much more alluring. North Asia is still well under-represented in LCC seat terms compared with Southeast Asia, suggesting there is still plenty of room for expansion, if done prudently.