In addition to Kenya Airways’ goal to serve every city on the African continent by 2014, which is running slightly behind schedule, it is also interested in expanding beyond Africa and plans to commence service to Beirut “very soon”, increase its service to India, resume service to Karachi in Pakistan, and is considering entering the Central Asian market. The carrier is keen to enter new markets and plans to use Dubai as a transit city for some of the planned new routes.

Kenya Airways is bullish on its Dubai services and plans to increase it to double daily in the near future. It currently operates a daily service to Dubai using Boeing 767-300 equipment. Abraham Joseph, Kenya Airways regional head for Middle East and Pakistan, told the Khaleej Times that Kenya Airways has lately averaged an 85% load factor to Dubai. Mr Joseph said the Dubai flight in 2011 contributed USD37 million of revenue, or about 4% of the carrier’s total revenue. The carrier expects to increase that to USD50 million in 2012.

Kenya Airways currently competes with Emirates, which offers just over 4000 seats compared to Kenya Airways’ 2000 seat offering. Air Arabia and Rwandair also operate between Kenya and the UAE: Rwandair operates its Dubai service through Mombasa while Air Arabia operates a four times weekly A320 service between Nairobi and Sharjah. Etihad will commence services between Abu Dhabi and Nairobi on 01-Apr-2012. 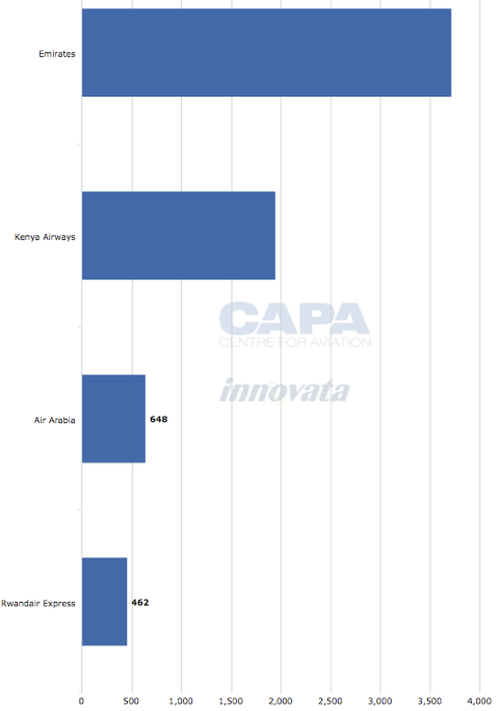 Kenya Airways wants to operate one service at night and one during the day, so it can cater for tourism and business. Its current schedule sees a daily 19:20 departure from Nairobi arriving into Dubai 01:35 the following day with a subsequent 02:35 departure from Dubai and 06:40 arrival into Nairobi. Kenya Airways also operates a three weekly service via Muscat.

Kenya Airways currently serves Mumbai daily with 777-200 equipment, however, is seeking to expand further into the region. Within the next five years, Kenya Airways hopes to double frequency to Mumbai and enter Delhi (which regional competitor Ethiopian Airlines also serves) as well as serve Ahmedabad and Chennai in the country’s east.

India’s economic growth has averaged around 7% each year since 1997, making it one of the world’s largest emerging markets. According to Airbus forecasts, traffic flows between sub-Saharan Africa and India are expected to grow at a rate of 7.1% p/a over the 2011 to 2030 period.

There are currently six carriers operating between Africa and India, five of which are African carriers (four of them are in sub-Sahara Africa). While Kenya Airways is the second largest African carrier to operate to India, its Nairobi-Mumbai route is the busiest of all nine routes operating. 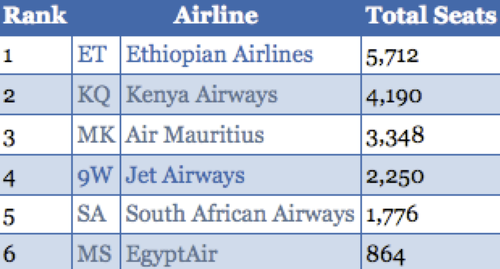 As the largest city of Lebanon, Beirut is home to the country’s only international airport and is a major aviation hub in the region. Beirut International Airport is already served by over 10 major international carriers including Emirates, Turkish Airlines, Qatar Airways and Egyptair, however, when Kenya Airways begins its service to Beirut in 4Q2012, it will only be the second sub-Saharan African carrier operating in the market, after Ethiopian Airlines. Kenya Airways has not yet disclosed its operating schedule. 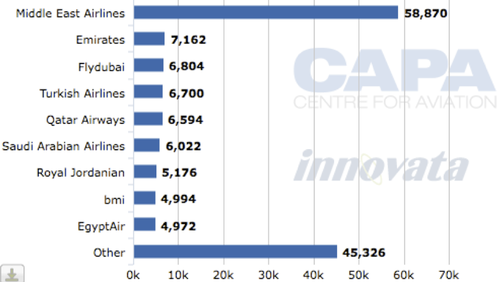 In 2011, Lebanon received over 2 million tourist arrivals, just under 2010’s level, however, a significant increase from 2005’s figure of 1.4 million. A large portion of Lebanon’s tourist arrivals can be attributed to its diaspora community. The Lebanese community in Africa is large with well over 150,000 Lebanese nationals living in Africa. The African countries with the largest Lebanese communities include Senegal, South Africa, Nigeria and Sierra Leone. Kenya Airways plans to capitalise on transporting this community. 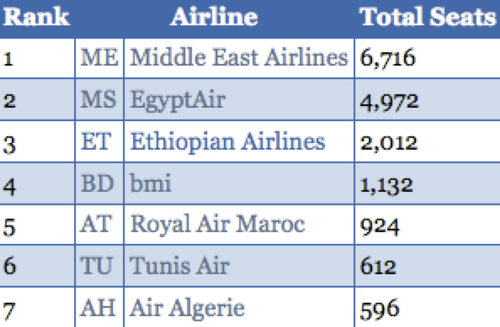 Mr Joseph said Kenya Airways is also targeting an increase of the twice weekly flight to Jeddah it commenced in Oct-2011.

Plans to resume service to Karachi in 2013

Karachi is the largest city (population between 13 to 15 million) and financial centre of Pakistan, with the city’s economy accounting for around 30% of Pakistan’s total manufacturing revenue. Karachi is also home to the headquarters of major oil company Pakistan Petroleum Company, making it an important destination for Kenyan and Pakistani business travellers as it is located close to many of the country’s offshore oil rigs. Kenya has been perusing the exploration of oil, largely unsuccessfully, since 1993 and is currently increasing efforts with Canadian-based Africa Oil for further exploration.

Historically low levels of investment have resulted in slow growth for Pakistan and much of the country’s economy remains underdeveloped. International airlines have slowly pulled out of the country in recent times. 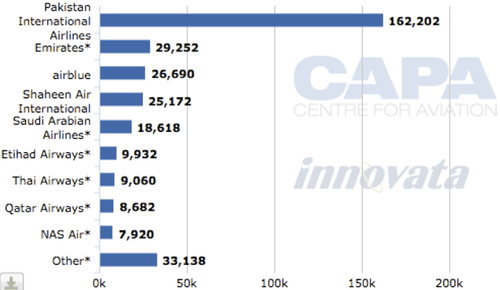 Kenya Airways is looking at resuming service to Karachi in 2013 (the carrier dropped the destination early last decade). Initial equipment will be the 737-800 but Kenya Airways plans to upgrade the service to 767-300 as the widebody capacity is more suitable to passenger and, critically, cargo demand.

By looking at Central Asia as a possible new destination (Kazakhstan and Azerbaijan have both been mentioned as potential new countries), Kenya Airways continues to expand to oil producing and emerging countries. Kazakhstan is the largest economy in Central Asia and the 18th largest oil producer in the world. Its economic strength, which can largely be accredited to its oil production, is also due to the successful diversification of export products including fossil fuel, uranium, copper, zinc, livestock and grain. The country has no significant African trading partners and its major import and export partners include China, Germany, Russia, France, Turkey and the Ukraine.

If these new routes eventuate, Kenya Airways is likely to serve Almaty – the largest city and economic centre of Central Asia. There are currently no airlines operating between Africa and Central Asia, meaning Kenya Airways could be the first to the pave the way for stronger trade relationships.

The 22nd largest oil producer in the world, Azerbaijan, is the second country in Central Asia Kenya Airways has expressed interest in serving. Azerbaijan, with its GDP growth rate of just 0.2%, is not the powerhouse of Central Asia like Kazakhstan, however, its status as a major oil producer makes it a destination of interest. Importantly, the country is seeking to diversify its economy and expand its trade relations from being largely centred around Russia to expand to Europe and Turkey.

Kenya Airways has signalled its intent to commercially work with airlines in Central Asia and would likely route flights via Dubai, where it has commercial agreements, Mr Joseph said.

Kenya Airways’ Middle East and India destinations as at Feb-2012 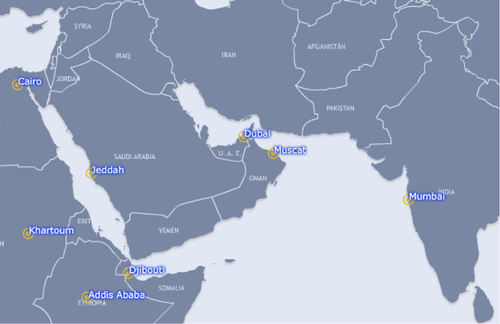 The first of Kenya Airways’ nine 787-8s are projected to be delivered in 2014. The airline, like almost all 787 customers, is frustrated by the delays – Kenya expected its first 787 in 2010 – but has devised plans to continue growth. Kenya Airways is currently refurbishing one of its 767s and expects to receive a new 777 in 2012 as well as take two aircraft, likely 767s, from another airline. Growth will be accelerated once the 787s arrive. Kenya Airways is also looking at growing its short-haul network and last year announced an order for 14 Embraer E-190s, four of which have already been delivered and the remaining 10 are slated for delivery from 3Q2012. 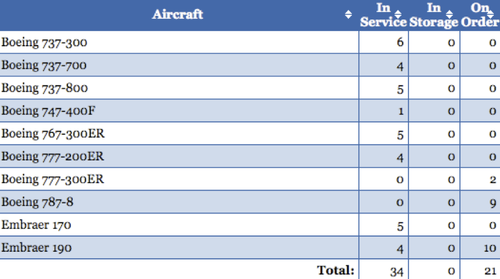 The competition in East Africa is centred around Kenya Airways and Ethiopian Airlines. Ethiopian Airlines already operates to Chennai and Beirut, however, Kenya Airways’ planned destinations to Central Asia, Ahmedabad and Karachi would, if realised, represent new air links for East Africa at a time Gulf network carriers are expanding their footprint in Africa. The carrier is also concentrating on its regional network; its Jambo Jet LCC subsidiary is on schedule to launch in Apr-2012.