Bahrain’s Gulf Air continues to refine its flight schedule as it seeks to enhance the efficiency and attractiveness of its operations. Earlier this year, the loss-making carrier launched a new commercial initiative and advertising campaign to regain lost ground in its home market. Now it hopes that enhancing the convenience of its services will continue to attract passengers away from its rivals.

For the winter 2011/2012 schedule, Gulf Air is enhancing its operations in the Middle East and Indian Subcontinent. It is upping its operations in both regions to take advantage of rising demand, while improving flight timings to offer more convenient connections for international passengers. The carrier’s winter schedule increases its weekly operations to almost 700 flights, up from last year’s 644. 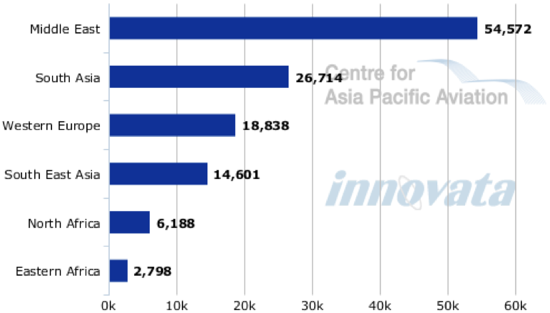 In terms of seats per week, Gulf Air’s operations are dominated by the Middle East, which accounts for almost 45% of its weekly capacity. Dubai and Doha are the carrier’s top two destinations in terms of weekly frequencies and seats.

However, on an ASK basis, Southeast Asia and Europe become much more important, with these long-haul regions accounting for just over 57% of Gulf Air's total ASKs between them. South Asian destinations account for a quarter of the carrier’s weekly ASKs. 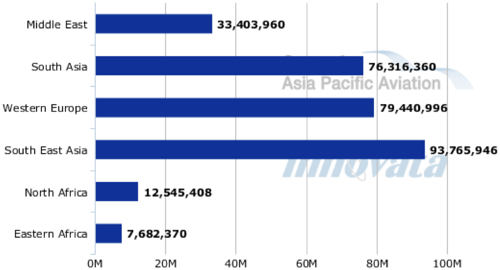 Capacity additions in the Gulf and Middle East

Also in the GCC, Gulf Air will add another daily frequency to Kuwait, taking the route to five times weekly.

The carrier’s Saudi Arabian operations will also receive a boost, with Medina operations advancing from four times weekly to daily and its operations to Dammam retimed to better reflect demand. Gulf Air has reported increasing demand from customers in the east of Saudi Arabia to provide flexible flight options that connect to other destinations in Gulf Air’s network. The carrier's other Saudi destinations will remain at present levels, with 18 weekly frequencies to Riyadh and 16 weekly frequencies to Jeddah.

In the wider Middle East, Gulf Air is taking advantage of some less heavily traveled routes. The carrier is resuming its operations to Iran, with the Tehran service returning on 01-Oct-2011, Mashhad on 13-Oct-2011, Shiraz resuming effective 17-Oct-2011 and Isfahan to be launched on 30-Oct-2011, with three weekly frequencies.

To improve connection times, the carrier is also shifting the timing of some frequencies to Cairo and Beirut from the afternoon to late at night. Operations to the Syrian capital of Damascus will be adjusted from A320 equipment to smaller E170s.

None of Gulf Air’s rival GCC carriers are operating to Aden or Basra, although demand into both Iran and Iraq has been climbing over the past few years. The carrier views cities such as Isafahan as “unexplored markets” with strong growth potential.

The carrier’s South Asian operations are receiving an overhaul, with adjustments and increased frequencies on its routes to Chennai, Delhi, Mumbai, Kathmandu, Dhaka and Colombo.

The carrier’s total frequencies to India will increase only marginally, with Chennai service being boosted from seven to nine times weekly. The route has been operating at close to 85% average load factors. Chennai, Delhi and Mumbai flight timings have been adjusted to offer better connections to the carrier’s destinations in Europe and North Africa.

Kathmandu service will increase from 12 times weekly to twice daily over the winter schedule. Peak periods over Dec-2011 and Jan-2012 will see some A320 operations replaced with A330 equipment to further enhance capacity.

Operations to the Bangladeshi capital of Dhaka will be increased from 10 to 11 times weekly, with the schedule modified to provide connectivity to key high volume markets via Bahrain, such as Dammam, Beirut and Kuwait, as well as European and other GCC destinations.

The carrier’s Colombo service will be raised from eight to nine times weekly. Launched in Oct-2010, the route has consistently been registering load factors around 75%. The Colombo route has seen a strong increase in traffic from key European destinations.

Gulf Air’s operations to Europe and Southeast Asia are relatively unchanged in the winter schedule. Service to Istanbul will be increased from five to seven times weekly, reflecting the strong demand in the market. However, the carrier will cut service to Milan Malpensa from six to five times weekly, with western European traffic generally softening.

The carrier will cut capacity to Kuala Lumpur significantly, cutting frequencies from nine to five times weekly. Manila operations will be reduced from 12 to 11 times weekly.

After almost a decade of upheaval and heavy losses, Gulf Air has set a goal of reaching break-even in the next few years. Reflecting this, the carrier is moving away from major strategy shifts to concentrate more on fine-tuning its network, with a focus on the core Gulf region. As it attempts to recover lost market share in its home market and improve its passenger mix, the airline is concentrating on refining its product to match that offered by Gulf rivals, as well as providing its passengers with a better rounded and more tightly connected network.