Greece’s airlines are operating in an unsympathetic environment shaped by four consecutive years of economic recession and austerity measures, worries about a possible exit from the eurozone and a fragmented market with the largest carrier holding a mere 33% capacity share. The situation is untenable and revives the discussion if the European Commission (EC) in Jan-2011 took the right decision in blocking the proposed merger between Aegean Airlines and Olympic Air.

Both of Greece’s major carriers are loss making and Olympic, which had high hopes to become Greece’s new national carrier after it bought some of the assets of the state-owned and de facto-bankrupt flag carrier Olympic Airlines, was forced to refocus its strategy towards regional operations to survive. Olympic’s passenger numbers fell 23% in 2011 to 3.4 million from 4.4 million in 2010.

The EC had reasoned that the combination of Aegean and Olympic would have resulted in a “quasi-monopoly” on the domestic Greek air transport market, specifically on nine routes from Athens, and that its investigation showed “no realistic prospects” that a new airline of a sufficient size would enter the routes and restrain the merged entity’s pricing. Greece’s domestic market represents about a third of the total Greek market in terms of seat capacity offered, according to data from Innovata. There were no significant competition problems on short-haul international routes within Europe, the EC concluded.

Since the Commission’s rejection of the Aegean-Olympic merger, the Greek market has contracted, owing to the depressed economy and three small carriers – Athens Airways, ArGo Airways and Viking Hellas Airlines – ceasing operations. Viking Hellas operated four routes, connecting two European cities – Amsterdam and Manchester – with three in Iraq via a mini-hub at Athens while Athens Airways and ArGo operated a handful of domestic routes. Viking Hellas stopped trading in Dec-2011 with its three aircraft being returned to the aircraft lessors.

What has not changed is the dominant position of Aegean and Olympic on the domestic market. Together they still control 90% of weekly seat capacity in May-2012 though this is 5 ppts less than a year earlier, according to OAG data. Two smaller Greek carriers and four foreign carriers – of which three are leisure carriers belonging to a major European tour operating company – fly the remaining capacity. Embattled Cyprus Airways, which has had a codeshare agreement with Olympic Air since Mar-2011, has upped its seat offering with Greece year-on-year fivefold and is now the third (although very distant) largest domestic operator.

The domestic market includes 24 routes covered by public service obligations (PSOs). The government-subsidised PSOs were recently re-tendered and on 11-Apr-2012 the Hellenic CAA announced that it allocated 13 routes to Olympic Air, five routes to the Thessaloniki-based regional carrier Astra Airlines, four routes to Crete-based Sky Express and one route to Aegean. The allocation operates until Mar-2016.

Olympic Air and Aegean Airlines adopted a different approach following the EU Competition Commission’s decision not to approve the planned merger and survive a worsening Greek economy and difficult operating environment exacerbated by a variety of general strikes (including from the country’s air traffic controllers).

Aegean embarked on a mainly international focussed expansion strategy aboard a streamlined fleet of A320 family aircraft whereas Olympic Air retracted its flag carrier ambitions and replaced it with a largely regional focus. It added domestic routes while trimming and reorienting its international footprint to Southeast Europe. Routes to Athens to Vienna, Brussels, London Heathrow, Paris CDG and Amsterdam have been discontinued and presently only two of Olympic’s 10 largest routes in terms of weekly seat capacity are international. The majority of its fleet consists of regional aircraft, such as 15 Bombardier Dash-8 and one ATR 42 allowing better performance and higher frequencies on shorter sectors.

Olympic now deploys 83% of its seat capacity on domestic routes and Aegean 50%, according to Innovata data. Olympic operates on a network spanning 39 passenger destinations and 32 of these are Greek airports. In comparison, Aegean serves 13 domestic and 20 international destinations.

Olympic has slightly increased its domestic market share over the last year, growing 1 ppt from May-2011 to May-2012, according to OAG data. Over the same time span, Aegean’s share of seat capacity within Greece decreased by 6 ppts. 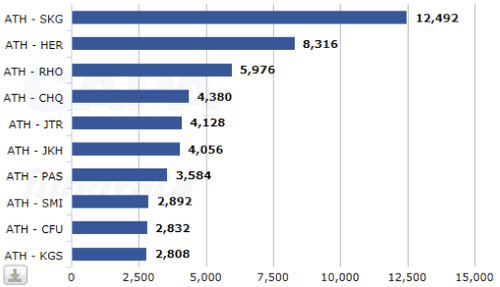 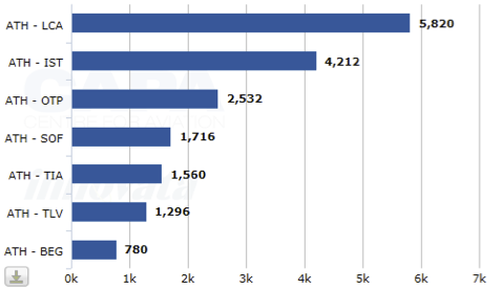 Aegean and Olympic compete on domestic routes, not internationally

In its reasoning to block the proposed tie-up between Olympic Air and Aegean Airlines to create a single major Greek airline, the EC cited the merger would have created a quasi-monopoly in the domestic market, “specifically on routes between Athens and Thessaloniki, the country's second-biggest city, and between Athens and eight island airports, namely Herakleion and Chania, both in Crete, Rhodes, Santorini, Mytilini, Chios, Kos and Samos”.

At present, both carriers still compete head-to-head on all but two of these routes after Aegean pulled out of Athens to Samos and Athens to Samos in Oct-2011. Seven of Aegean’s top 10 largest domestic routes in weekly seat capacity are also in Olympic’s top 10 largest domestic routes in weekly seat capacity. The country’s busiest domestic route, Athens-Thessaloniki, on 27-Mar-2012 saw the entry of a new competitor, Cyprus Airways, which launched a thrice weekly service with A320s. Aegean offers 54 weekly services on the route and Olympic Air offers 39, Innovata data shows. 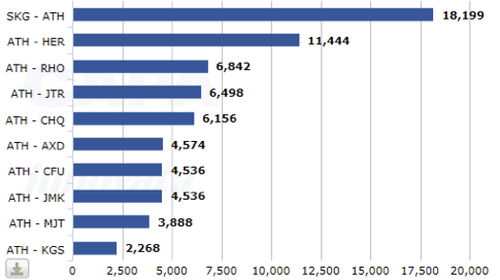 On international routes the situation is the inverse and Aegean and Olympic Air are avoiding each other’s presence, alias competition. Olympic has gradually moved out of Western European markets and becoming a niche airline in Southeastern Europe and the eastern Mediterranean region while Aegean has expanded its international reach mainly in Western Europe. Olympic gave its main competitor a little helping hand in its expansion and last year did sell its slots at London Heathrow and at Paris CDG to Aegean. 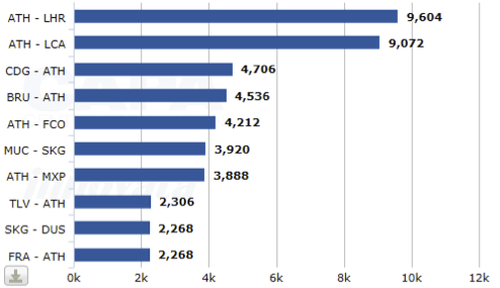 The carriers only compete on three international routes – Athens to Larnaca, Istanbul Ataturk Airport and Tel Aviv. As a Star Alliance member since 2010, Aegean connects to partner hubs such as Frankfurt, Dusseldorf, Munich, Brussels and Istanbul. Aegean is the largest airline on international routes to/from Greece but it currently operates only about 14% of the total international seat capacity according to Innovata data, with Ryanair and easyJet rapidly closing in.

Neither Aegean nor Olympic currently operate long-haul flights. 95% of Greece’s international capacity is allocated to routes within Europe. 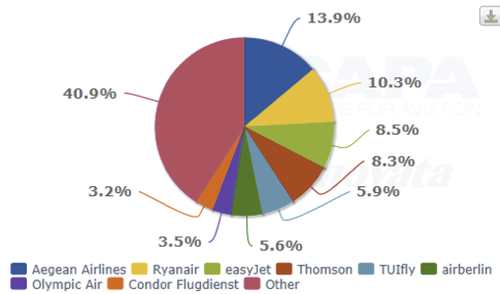 LCCs do not venture into Greece's domestic market

The Greek market has not been immune to Europe’s blossoming LCCs despite the large presence in the holiday seasons of leisure carriers that offers flights on a seat-alone basis or as part of a tour operator’s package. Charter carriers offer low fares and often come with a more generous complementary service offering, making it harder for LCCs to enter the same market.

The share of LCCs in Greece’s international seat capacity attained 28% in 2011, which is a low penetration compared to other South European countries like Italy or Spain where LCCs offered 42% and 54% of seat capacity on international routes, respectively. On the domestic front, LCCs account for less than 1% of seat capacity in Greece, which is stunning given the existence of some large domestic routes such as Athens to Thessaloniki and Athens-Irakleion. Even easyJet, which has Greek roots, has not yet ventured into the Greek domestic market. In Italy and Spain LCCs had a 40% and 36% share of domestic seat capacity in 2011, according to OAG data. 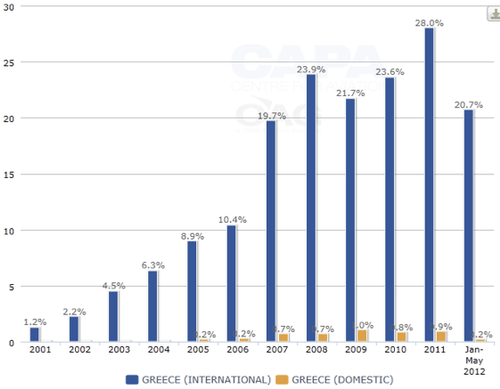 The absence of a powerful LCC of the likes of Ryanair and easyJet with a large base in Greece is a blessing for Aegean Airlines and Olympic, which have proven to be adaptable to adverse circumstances. The carriers quickly reacted to the European Commission’s veto to their planned merger, which was their solution to endure a worsening economic environment, and found each a market to grow while cutting costs to counter the effect of lower consumer spending.

But their adaptability might not be sufficient as the market continues to contract and Greece spirals into depression with the prospect of a default and an exit of the euro zone becoming a plausible scenario. According to OAG data, capacity in seats on intra-European routes to/from Greece dropped 10% in the first five months of this year compared with the year-ago period. Domestic seat capacity fell 7%. Both airlines posted losses in 2011; Olympic Air closed the year with a EUR37.6 million deficit on a 28% fall in revenue and Aegean reported a EUR27 million deficit in spite of a 13% hike in revenue grew to EUR668 million.

Several airlines are anticipating a difficult winter and reducing or pulling services to Greece. KLM will maintain one daily service from Amsterdam to Athens, on par with the present summer schedule but reduced from two daily frequencies in winter 2011/12. Star Alliance member TAP Portugal is suspending its planned thrice weekly from Lisbon to Athens starting 28-Oct-2012 and Brussels Airlines will also suspend its route to Athens from Brussels 28-Oct-2012.

Asian carriers also have been discontinuing service to Athens. Thai Airways dropped Athens late last year and Singapore Airlines (SIA) recently announced it will discontinue its Athens service in Oct-2012. The loss of Thai Airways and SIA is a blow to the Athens hub and Aegean as both carriers are also members of Star. Athens will be left with service from only one Asian carrier, Air China, although Gulf carriers will continue to have a big presence in Greece and provide one-stop connections throughout Asia. Air China does not serve Athens with a non-stop product as it routes its flights from Beijing to Athens, which were launched in May-2011, via Munich.

Having two full-service airlines in Greece, a market of 11.2 million inhabitants, is not sustainable. A merger of Aegean, which accounts for less than 1% of total European seat capacity, with an airline of an even smaller size would have created an airline with more scale and substance to resist a market with a ghastly outlook like Greece.

Aegean Airlines fleet summary as at 18-May-2012