Emirates is poised to overtake Cathay Pacific as the largest foreign full service airline in the Singapore market from early 2016 as it upgauges two of its seven daily Singapore flights to the A380. Emirates will have almost 42,000 weekly seats in Singapore in Mar-2016, a 12% increase over its current capacity and a 29% increase compared to Mar-2014.

Emirates has been a key contributor to growth in Singapore over the last two years during an otherwise very slow period for Changi Airport. The expansion would not have been possible without a new and fast growing partnership with Singapore-based LCC Jetstar Asia.

Jetstar Asia has enabled Emirates to use Singapore as a regional hub for Southeast Asia. Emirates already had hub status at Singapore with three fifth freedom destinations along with four daily non-stop flights from its main hub in Dubai.

Emirates further expands in Singapore as another A380 is introduced

Emirates is currently the eighth largest airline in Singapore and the fourth largest full service carrier after Singapore Airlines (SIA), SIA regional subsidiary SilkAir and Cathay Pacific. It is Singapore’s largest carrier from outside Asia Pacific by a wide margin as the next largest, Qatar Airways, has less than one third the capacity of Emirates despite adding a third daily flight to Singapore in Jun-2015.

Emirates currently has seven daily flights from Singapore, including four to Dubai and one each to Brisbane, Melbourne and Colombo. The Sri Lanka flight continues onto Dubai, giving Emirates five daily flights to its main hub when including the one-stop via Colombo, while Brisbane and Melbourne are tags on two of its four Dubai non-stops.

Cathay Pacific has between eight and nine daily flights to Singapore, including one to Bangkok and between seven and eight to Hong Kong depending on the day of the week. Cathay currently deploys five aircraft types to Singapore with various configurations but on average has roughly 39,000 weekly seats at Changi. (Note: Cathay’s actual capacity to Singapore varies by up to 2,000 seats depending on the time of year as Cathay uses larger gauge aircraft during peak periods but the overall average is approximately 39,000 seats.)

Emirates currently has 37,478 weekly seats to Singapore. This is an exact figure as it currently uses 360-seat 777-300ER on six of its seven daily Singapore flights and a 517-seat A380 on one of its four Dubai non-stop flights. (Note: Emirates for operational reasons occasionally has to serve Singapore with a 777 in a different configuration.)

Emirates has unveiled plans to upgauge its daily Dubai-Singapore-Melbourne flight to the 517-seat A380 from 1-Mar-2016. This will give Emirates 41,874 weekly seats to Singapore, putting it ahead of Cathay.

Note: only Emirates figure is exact. The other figures are averages
Source: CAPA - Centre for Aviation & OAG

Emirates A380 further intensifies competition between Singapore and Melbourne

Emirates has steadily expanded in the Singapore market over the last several years. The first A380 was introduced in Dec-2012 when Emirates upgauged what at the time was its only Dubai-Singapore turnaround flight.

Emirates currently has a total of four daily flights from Melbourne, three of which will be operated with the A380 from Mar-2015, leaving only Melbourne-Kuala Lumpur-Dubai with the 777-300ER. Emirates’ total capacity to Melbourne will increase to about 26,000 weekly seats in Mar-2016, making it Emirates 12th largest destination based on seat capacity.

The current eight daily flights on Bangkok give Emirates a total of 112 weekly frequencies at Suvarnabhumi (BKK) , including four (and from Dec-2015 five) with the A380, compared to the seven for Singapore including one (and from Mar-2016 three) with the A380. Bangkok will retain its role as the largest destination in the Emirates network. 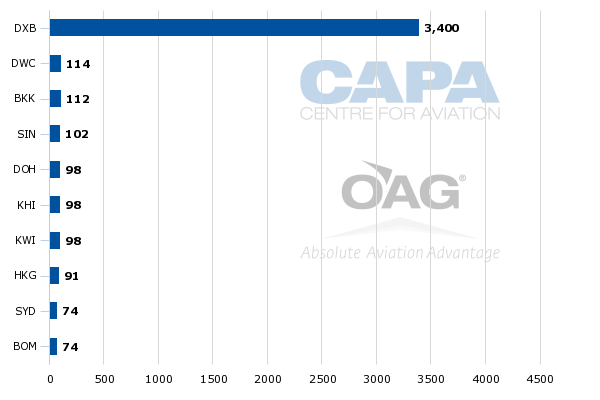 Emirates is expanding capacity in Bangkok at an even faster clip than Singapore as the additional Bangkok A380 flight, which is being introduced from 1-Dec-2015, will be operated with Emirates’ new 615-seat two class A380. This will give Emirates four daily A380 flights on Dubai-Bangkok along with two daily 777-300ER flights. Emirates also operates Bangkok-Hong Kong with A380s and Bangkok-Sydney with 777-300ERs.

Emirates expands premium capacity in Singapore by another 21%

Emirates has kept a first class product on all seven of its Singapore flights, including Colombo. It currently offers 868 first class seats in the Singapore market, making it the second largest first class carrier in Singapore by a wide margin. SIA obviously remains the market leader as it has a first class cabin across its fleet of 19 A380s and 26 777-300ERs.

After Emirates upgauges Dubai-Singapore-Melbourne to the A380 it will have 1,036 weekly first class seats in Singapore. Its weekly business class capacity in Singapore will also increase from 4,592 seats to 5,544 seats. Emirates will therefore have 6,580 weekly premium seats in Singapore in Mar-2016, an increase of 21% compared to currently.

Three years ago, in Nov-2012, Emirates had only about a 2.1% share of seat capacity in Singapore. The expansion by Emirates has been crucial for Singapore as Changi has seen traffic growth slow significantly over the last three years. Changi passenger growth slowed to 5% in 2013, ending three consecutive years of double digit growth, and slowed again to less than 1% in both 2014 and 1H2015.

Jetstar Asia partnership has been driver in Emirates’ Singapore expansion

The fourth daily non-stop flight from Dubai to Singapore was particularly made possible by the Emirates partnership as this flight was timed to arrive in the morning, resulting in significantly improved connection times to several key Jetstar Asia destinations. The fourth flight was introduced on 1-Aug-2014, or just four months after Emirates began codesharing with Jetstar Asia.

The codeshare with Jetstar Asia initially included 10 destinations with three more added in Oct-2014 for a total of 13. Jetstar Asia’s nine other destinations are covered with an interline arrangement as bilateral restrictions preclude a codeshare on some routes.

Of the 13 destinations currently covered in the codeshare six are offline destinations for Emirates – Darwin in Australia, Penang in Malaysia, Medan in Indonesia, Yangon in Myanmar and Phnom Penh and Siem Reap in Cambodia.

Darwin particularly has been a popular connecting destination as Emirates passengers previously were only able to access northern Australia by backtracking from other Australian destinations. Yangon, Phnom Penh and Siem Reap are also popular offline destinations for Emirates but these are also served via Bangkok using full service regional carrier Bangkok Airways.

Bali in Indonesia was one of the largest – and probably the largest – Jetstar Asia codeshare destination for Emirates until Jul-2015, when Emirates launched non-stop flights from Dubai to Bali. Emirates obviously noticed it was carrying sufficient traffic to Bali via Singapore to justify a non-stop service.

While the launch of Bali non-stop flights has impacted Jetstar Asia connection traffic, this is often a trade off of any successful partnership. Jetstar Asia should be able to fill the void by carrying more Emirates passengers to other destinations, including three new destinations it is launching by the end of 2015 – Da Nang in Vietnam and Palembang and Pekanbaru in Indonesia. (These are all secondary destinations that are not currently served by Emirates.)

In deciding to launch its own flights to Bali, Emirates also likely noticed the success rival Qatar Airways was enjoying in the Bali market. Qatar launched non-stop service from Doha to Bali in Jul-2014 and already added a second daily flight on the route in Jul-2015.

The third flight was added on 1-Jun-2015. Qatar currently operates three daily A350 flights to Singapore, giving it 11,886 weekly seats in the Singapore market – more than any other non-Asian carrier after Emirates.

Gulf carrier weekly seat capacity at Singapore: as of Mar-2016

Once it introduces the additional A380 flight Emirates will have three and a half times more seat capacity in Singapore than Qatar and nearly 13 times more capacity than Etihad. But unlike its two Gulf rivals Emirates uses Singapore as a hub, offering codeshare connections with Jetstar Asia and Qantas as well as its own Singapore stopovers. As previously highlighted by CAPA, a majority of Emirates' passengers on the Dubai-Singapore-Melbourne and Dubai-Singapore-Brisbane flights are heading to Australia.

Emirates should be able to grow transit traffic in Singapore further as it upgauges Dubai-Singapore-Melbourne to the A380 and continues to expand its partnership with Jetstar Asia. Inevitably it will also grow its share of the local Singapore market, intensifying competition with SIA.

Emirates is already the second largest airline after SIA in the Singapore-Europe market, carrying approximately a 14% share of passengers (includes non-stop and one-stop traffic). It also has a small but growing share of the Singapore-North America market. Competition is already intense in both these markets, with Qatar particularly making a push over the last year, but Emirates has the scale and cost structure to continue gaining market share.

Singapore has quietly become Emirates’ second largest destination after Bangkok, which is a much larger local market.

Nevertheless, Singapore is in many respects more a hub than a destination for Emirates, a position reinforced as Emirates becomes the only A380 operator on the Singapore-Melbourne route and overtakes Cathay as the largest foreign full service carrier in the Singapore market.