Gulf carriers are continuing to pursue ambitious expansion in Singapore, intensifying competition with Singapore Airlines (SIA). Gulf carriers are steadily increasing their share of the Singapore-Europe market while SIA reduces capacity to Europe.

This is the second in a series of analysis reports on the Singapore market.

The first report analysed Singapore Changi’s traffic figures for 2014, which grew by less than 1%, and the slowdown in the LCC sector. This report looks at the Singapore-Middle East and Singapore-Europe markets.

Singapore Changi recorded a 2% drop in passenger traffic to Europe in 2014, to 3.881 million. Europe was the weakest performing region for Changi for the second consecutive year. In 2013 passenger traffic between Europe and Singapore dropped by 5.2%.

As the Gulf carriers have expanded in Singapore they have steadily increased their share of the Singapore-Europe market – just as they have elsewhere in Southeast Asia.

Passenger traffic between Singapore and West and South Asia was up 5.6% in 2014 to 5.9 million passengers, making it the fastest growing of Changi’s regional categories. 2014 marked the first year Changi combined West Asia (the Middle East) and South Asia into a single region.

Singapore-Europe non-stop capacity has been in decline since 2012

In comparison the Singapore-Europe market will have in Jul-2015 about 107,000 weekly non-stop seats including approximately 70,000 seats from SIA. This represents flat capacity for SIA and a slight decrease overall compared to Jul-2014, when there were about 109,000 weekly seats. 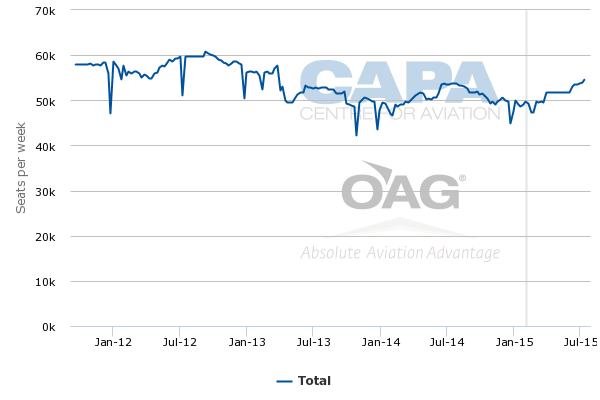 Qantas has accounted for most of the reduction in capacity over the past couple of years. The Australian carrier’s withdrawal from the Singapore-Europe market in early 2013 also partially explains the reduction in Changi’s Europe passenger numbers over the last two years.

Qantas previously served London and Frankfurt from Singapore with about 17,000 weekly return seats. But an overwhelming majority of its passengers on these routes originated from or were heading to Australia.

Qantas pulled out of Frankfurt entirely while the stopover on its Sydney-London and Melbourne-London flights was moved from Singapore to Dubai as part of a new partnership with Emirates. Qantas’ move to Dubai further underscores the growing role of Middle East hubs for transit traffic between Asia-Pacific and Europe.

Etihad operates only one flight to Singapore but has always served Changi as a stop on its Abu Dhabi-Brisbane flight, which was launched in 2007 and was upgraded to daily in early 2013. Etihad plans to launch non-stop 787-9 services to Brisbane on 1-Jun-2015 while maintaining its daily A330-200 flight to Singapore.

Emirates was able to bolster its presence significantly in the Singapore-Europe market in Aug-2014, when it added its fourth daily non-stop flight from Dubai to Singapore. The fourth flight, which is operated with 364-seat 777-300s, technically boosted Emirates’ seat capacity between Singapore and Dubai by 29% to about 22,600 weekly return seats. But in reality the growth was significantly higher because a majority of passengers on two of its existing daily Dubai-Singapore frequencies continue on to Australia.

With the new turnaround flight the portion of Emirates’ Singapore passengers connecting beyond Changi has been reduced from over 50% to about 35% to 40%.

As a result Emirates has seen a significant increase in point of sale activity in Singapore over the last six months, which inevitably has been noticed by SIA and other competitors. Emirates has been able to sell more Singapore-Europe seats and has also boosted Singapore-US sales from a low base as the new flight combined with Emirates’ expansion in the US has opened up more connections.

The UK remains Emirates’ biggest connection market from Singapore but Emirates has picked up significant market share between Singapore and New York, driven partially by SIA’s Nov-2013 withdrawal of Singapore-Newark non-stops. It also has achieved growth on a relatively low base in the Singapore-Africa market with Casablanca being a particularly popular connection.

In addition to the four non-stops, Emirates operates one daily one-stop flight from Singapore to Dubai via Colombo. But this longstanding flight mainly caters to passengers heading to or from Sri Lanka, limiting opportunities for Singapore-Europe sales. Prior to the launch of the fourth non-stop frequency from Dubai, Emirates for several years had only one flight dedicated to the local Singapore-Middle East/Europe market. This flight was up-gauged to the A380 in late 2012 and is currently Emirates’ only A380 flight to Singapore.

Emirates could potentially up-gauge its second Singapore turnaround flight to the A380, particularly if it is able to continue growing its share of Singapore-Europe traffic as well as its partnership with Jetstar Asia. Emirates began codesharing with Jetstar Asia in 2014 and timed its fourth daily non-stop to Singapore to maximise connections to Jetstar Asia-operated offline destinations throughout Southeast Asia. The Jetstar Asia partnership and the additional capacity at Changi further grows Singapore’s status as an Emirates hub for Asia-Pacific but Emirates also sees opportunities to expand its presence further in the local Singapore market.

Emirates is particularly targeting a larger slice of the Singapore corporate market, a sector traditionally dominated by SIA. Currently only about 15% to 20% of Emirates’ Singapore revenues are generated by corporate accounts. This should grow as Emirates' connections from Singapore continue to improve and as the airline’s presence at Changi, where it is already the largest foreign full-service carrier with a share of over 3% of total seat capacity, becomes better known. 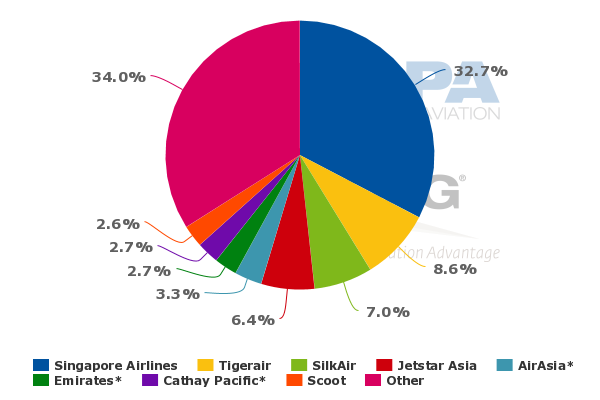 Qatar to increase capacity in Singapore later this year by 67%

Qatar Airways also expects a significant boost in Singapore-Europe and Singapore-US traffic after it adds a third daily flight to Singapore on 1-Jun-2015. In announcing the new flight on 2-Feb-2015 Qatar cited improved connections to the Americas and Europe.

The Jul-2015 versus Jul-2014 figures (displayed in the chart earlier in this report) shows a smaller increase of 40% because one of Qatar’s Singapore frequencies will still be operated in Jul-2015 with the 787. In Jul-2014 the carrier also still operated one of its two daily flights with the larger 777-300ER.

Qatar launched Doha-Bali non-stop flights in Jul-2014. All of its Singapore flights have since operated on a turnaround basis. While the Singapore-Bali sector was not operated year-round previously, a large portion of Qatar’s Doha-Singapore passengers continued onto Bali during peak holiday periods. (Qatar has uplift rights for Singapore to Bali as does Emirates and Etihad for its Singapore-Australia flights.)

Qatar will be the first A350 operator in Singapore, beating SIA

The new schedule of three daily A350 turnaround flights represents a huge commitment for Qatar to the Singapore market. It particularly is noteworthy as Qatar will be deploying its third, fourth and fifth A350s to the Doha-Singapore route. The first two aircraft are being allocated to the Frankfurt-Doha route. Qatar is currently operating one daily Frankfurt-Doha A350 flight and will transition its second Frankfurt frequency to the A350 on 1-Mar-2015.

As a result Singapore will be Qatar’s second A350 destination. Qatar will also be the first carrier operating the A350 to Singapore, beating SIA by about seven or eight months. SIA has 70 A350-900s on order with the first aircraft expected to be delivered in early 2016.

Transitioning Singapore to an all-A350 operation should raise Qatar’s brand presence in Singapore as it makes a bigger push into the Singapore-Europe and Singapore-Americas market. As is the case with Emirates and Etihad, SIA will be most impacted as SIA accounts for about two-thirds of non-stop seat capacity between Singapore and Europe.

SIA is no stranger to competing with the Gulf carriers across a wide range of long-haul markets including the kangaroo route connecting Australia and Europe. SIA is not about to back down, particularly in competing for premium traffic.

But SIA is making a major strategic adjustment by introducing premium economy while reducing economy class capacity. The resulting decrease in capacity on several medium/long-haul routes could help SIA to improve yields and profits in markets that have come under increasing competitive pressure, particularly from the Gulf carriers. SIA in theory will carry fewer low yielding economy passengers to and from Europe, essentially ceding this traffic to Gulf carriers and other aggressive competitors.

SIA will reduce seat capacity as it introduces premium economy

Retrofitting the A380 with premium economy will result in total seat density across all 19 of the super jumbos dropping by 30 seats, from 471 to 441 or from 409 to 379, as SIA has two A380 configurations. In both configurations 66 regular economy seats will be eliminated as 36 premium economy seats are added while the business and first class cabins are maintained. (SIA is not installing new economy, business or first seats as part of its upcoming A380 retrofit, allowing it to introduce premium economy across the A380 fleet in less than five months.)

The 777-300ERs are being retrofitted with SIA’s new economy, business and first class seats which were initially introduced on new 777-300ERs in late 2013. SIA is reducing total seat count by only 14 on the 19 777-300ERs that are slated to be retrofitted from 278 seats to 264 seats. SIA is expanding business class from 42 to 48 seats but reducing first class from eight to four seats while introducing 28 premium economy and eliminating 44 regular economy seats.

CAPA estimates the capacity to Europe will be reduced by 4% by Jan-2016 while capacity to North Asia, the Middle East, Southwest Pacific and South Asia will be reduced by between 1% and 2%. London will see the biggest seat reduction (1,036 weekly return seats) as three of SIA’s four London flights will feature premium economy. Frankfurt will have a reduction of 616 weekly return seats in the Singapore-Europe market as premium economy is operated on both of its Singapore-Frankfurt flights. Paris and Zurich, which is currently served with one daily A380 flight, will each be reduced by 420 weekly seats.

Singapore Airlines capacity changes by route due to premium economy introduction: as of early Jan-2016

Notes: *for these routes changes in total capacity are approximate because various configurations are currently used.
All capacity changes to be implemented by early Jan-2016. Reductions will begin in Aug-2015 and be phased in.
Source: CAPA – Centre for Aviation

The 4% reduction in capacity to Europe come as Gulf carriers continue to expand in the Singapore-Europe market. The reductions will also impact several sixth freedom markets where SIA competes with Gulf carriers, in particular Sydney-London.

The capacity reductions may seem relatively minor - but they represent a further shift in the competitive landscape for SIA and the Singapore market.

The new premium economy product, along with the reduced economy capacity and its ongoing commitment to continue upgrading its long-haul business class product, reinforces SIA’s position at the top end of the market. This is as much a response to European and Asian carriers, several of which now offer premium economy options.

But it is the Gulf carriers, which have not yet joined the premium economy bandwagon, that have singlehandedly changed the overall dynamic of Singapore’s long-haul market. There is no end in this battle. The pressure will continue to build as Gulf carriers continue to expand ambitiously in SIA’s home market.

And, as always, Singapore Airlines will use the increased tension to hone its competitive skills. The premium economy strategy is a sound one, but inevitably can only be successful in the short to medium term as the competitive cycle continues. In the airline business there is nowhere to hide, but there are always new opportunities for innovative quality companies.

Next on SIA: CAPA will look further at the SIA premium economy strategy as part of an upcoming report on the group's earnings for the quarter ending 31-Dec-2014