The current political turmoil in Egypt has led to a number of European nations advising their citizens not to travel to the North African country. The response by airlines has varied, but a number have announced the suspension of flights. Whether flights are suspended or not, demand for travel to Egypt will be hit by the ongoing news coverage of events there and the advice of many European governments.

Some air service suspensions have already been announced

A number of airlines and travel organisations have announced the suspension of flights to Egypt, including those listed in the table below. Others, including Austrian Airlines, Etihad, Emirates and EgyptAir have said they are continuing to operate to Egypt as normal. The majority have said that they continue to operate, but are closely monitoring the situation and the latest government advice. This is likely to reduce demand for bookings to Egypt and to lead to travellers seeking to switch existing bookings to other destinations.

European airlines that have announced the suspension of flights to Egypt

Europe is the second most important region for air travel to and from Egypt, ranked by scheduled seat capacity. Europe accounts for almost 28% of seats (Western Europe 21%, Eastern/Central Europe 7%), after the Middle East with 55% (source: Innovata, week of 19-Aug-2013). 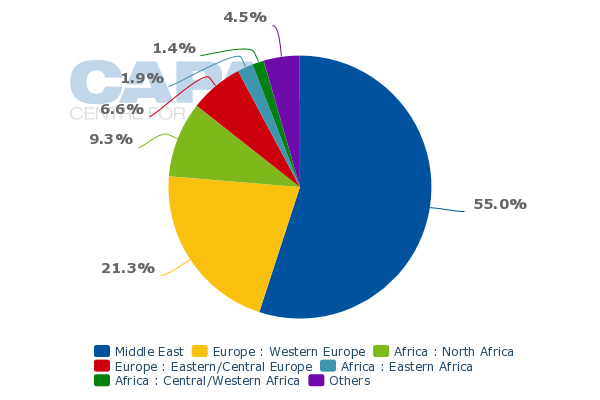 Egypt has been experiencing much slower economic growth since 2011 than it enjoyed prior to then. GDP growth is forecast by the IMF to be 2.0% in 2013, a similar level to 2011 and 2012, but much lower than the rates of around 5% to 7% in 2008 to 2010. While GDP growth is forecast to increase over the next few years, the current uncertain political environment may put this growth at risk.

With unemployment rising and the growth in exports still at low levels, the importance of inbound tourism and air travel to the economy is plain. Air links with Europe play a significant part in this. 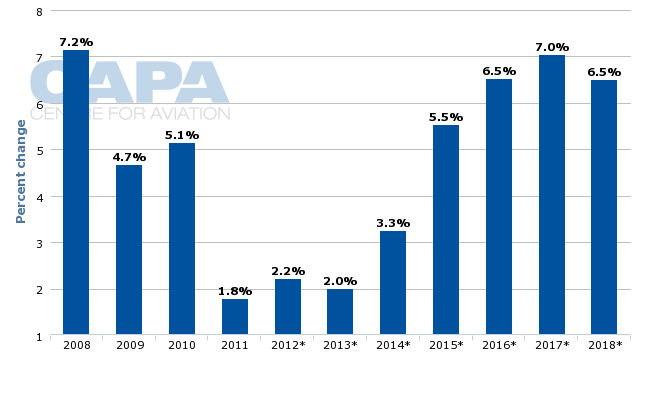 Volume of exports of goods and services of Egypt (percent change) 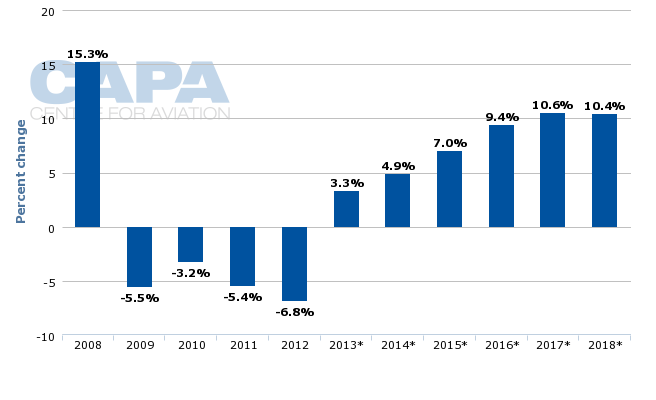 So, which airlines are most important in bringing passengers from Europe to Egypt?

As might be expected, Egypt’s national carrier EgyptAir is the leading airline on routes between Europe and Egypt, with more than one third of the market this summer (ranked by seats for the four week period commencing 12-Aug-2013, according to data from Innovata, which is based on scheduled flights).

Almost all of the remaining capacity is accounted for by European airlines (Air Arabia Egypt has less than half of one percent). Ranked second is Turkish Airlines, followed by Russian carrier Transaero.

The big European flag carrier airlines have fairly small market shares, although Lufthansa is fourth. KLM and Air France rank at 12 and 13 respectively and British Airways takes the number 16 position. Alitalia is only just behind Lufthansa and has a higher share to Egypt than its larger Dutch, French and British competitor flag carriers. If we aggregate them into their group structures, the Lufthansa Group is ranked second, the Air France-KLM Group is ranked fifth, while IAG remains 16th since neither Iberia nor Vueling operates to Egypt.

European airlines with a strong leisure focus, such as Monarch, Condor, Blu-Express and SunExpress Germany, also rank above the likes of KLM, Air France and BA. The airberlin Group is represented by airberlin itself, LCC subsidiary Niki and associate Belair Airlines, while Europe’s number two LCC easyJet is in seventh position. Europe’s largest LCC Ryanair is notably absent. Out of the 26 airlines flying between Europe and Egypt in Aug-2013, 13 are classified as low-cost carriers in CAPA’s LCC database. The strong showing of leisure carriers reflects Egypt’s attractions as a holiday destination, with its combination of ancient monuments, beaches and water sports.

LCCs have been important to growth

According to data from OAG and CAPA, LCCs have accounted for almost 13% of international seats in Egypt in 2013 (January to August). European LCCs make up around 35% of all LCC seat capacity in Egypt (week of 19-Aug-2013, source: CAPA and Innovata). After growing their share of seats in Egypt every year between 2004 and 2010, LCCs saw their share of international seats dip slightly in 2011, the year of the Egyptian revolution that deposed former President Mubarak. LCCs increased their share once more in 2012, but have again suffered a decline in 2013 so far (see chart below).

-_This highlights the sensitivity of leisure traffic to political events in Egypt. 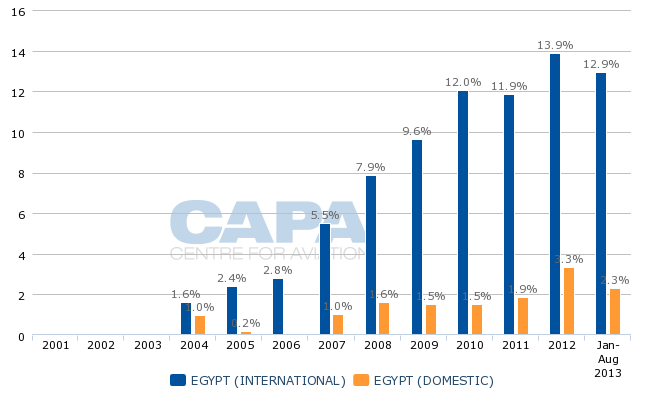 *Jan to Aug-2013
Source: CAPA - Centre for Aviation with data provided by OAG

Belair Airlines has 20% of its summer seats in Egypt

Based on this summer’s schedule (four week period from 12-Aug-2013), data from Innovata show that the European airline most exposed to Egypt is Zurich-based Belair Airlines, which has 20% of its scheduled seat capacity operating to the country (it is even more exposed to Kosovo and Turkey). Operating on behalf of (and 49% owned by) airberlin, Belair is only ranked number 20 by the number of seats between Europe and Egypt. This combination of low market share and high exposure to Egypt puts it in a vulnerable position if demand remains weak.

Rome Fiumicino-based LCC Blu-Express also has a double digit percentage (12%) of its summer seat capacity operating to Egypt, its second biggest market after Greece. For all the other European airlines, Egypt represents less than 5% of their total seat capacity. Transaero, Niki, SunExpress Germany, Monarch and Condor all have more than 2% of their capacity operating to Egypt. Alitalia is the most exposed flag carrier, with just over 1% of its seats. Although Turkish Airlines is the biggest European carrier between Europe and Egypt, this market represents less than 1% of its total seat capacity.

Air France-KLM’s LCC Transavia has just over 1% of its seats operating to Egypt, but the exposure of the Air France-KLM Group as a whole is less than half of this percentage. The Lufthansa Group is the most exposed of the Big Three European flag carrier groups, with 0.5% of its seats in Egypt, while IAG has only 0.1%.

For all the European airlines operating to Egypt, their combined seat capacity from Europe to Egypt represents less than 1% of their total number of seats to all regions. 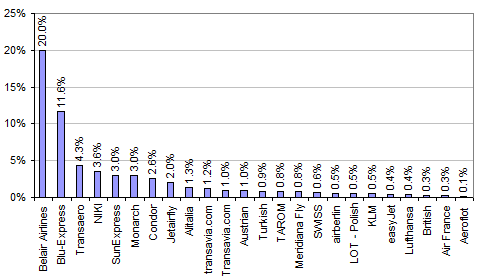 easyJet's market share will be higher in the winter

If travel restrictions persist, it is useful to examine the exposure of European airlines to Egypt in the next winter season. The ranking of market share by number of seats this coming winter (using data from Innovata for the four week period from 6-Jan-2014) is similar to the summer season.

One of the main differences is that easyJet moves up the market share rankings from number seven to number three. This reflects both easyJet's seasonal targeting of passengers seeking sun destinations during the Northern European winter season and its year-on-year growth of capacity to Egypt.

Again, the major flag carrier airlines have fairly small market shares. Lufthansa falls from number four in the summer to number nine in the winter as its seat capacity to Egypt halves. Air France and KLM rank at 13 and 14 respectively and British Airways is at 17. If we aggregate them into their group structures, the Air France-KLM Group is fifth, the Lufthansa Group is seventh and IAG is 17th.

Minimal seasonal variation in total seats between Europe and Egypt, as tourism attractions are year-round

This is because total capacity between Europe and Egypt is fairly constant from summer season to winter season, but European airlines' overall capacity to other regions is lower in the winter.

Egypt offers year-round sun and attracts leisure travellers much more evenly through the year than some other destinations favoured by European travellers in the summer. 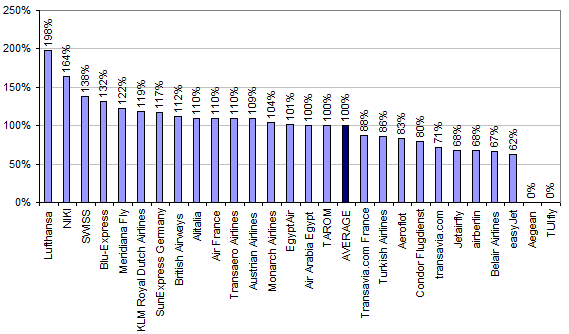 Belair Airlines is even more exposed than in the summer, with more than half of its seat capacity operating to Egypt in Jan-2014, and Blu-Express again has a double digit exposure (135 of its seats).

Monarch, Condor and Jetairfly also have a significantly higher proportion of their seats on Egypt routes in the winter than they do in the summer. The airberlin Group’s exposure to Egypt increases from 1% of its total seats in the summer to almost 2% in the winter. 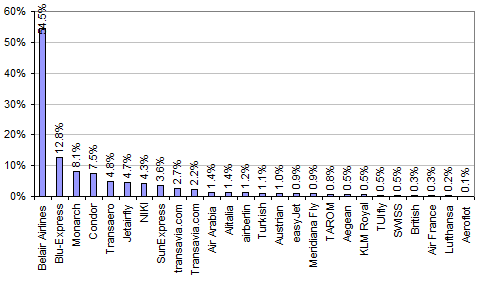 Combining both summer and winter capacity, the chart below ranks European airlines according to the proportion of their total scheduled seat capacity that is on routes to Egypt (making the assumption that the combination of the two four-week periods analysed give a fair representation of a full year). Note that there may also be charter carriers with a high exposure, but their capacity data are not reflected in the Innovata data examined.

This analysis suggests that the total cessation of flights to Egypt over both summer and winter seasons would represent a serious problem for Belair Airlines and Blu-Express, both of whom have a double digit percentage of their seats in Egypt.

It would also provide a significant headache to Transaero, Monarch, Condor, Niki, SunExpress Germany and Jetairfly, all of whom operate more than 3% of their seats on routes to Egypt. 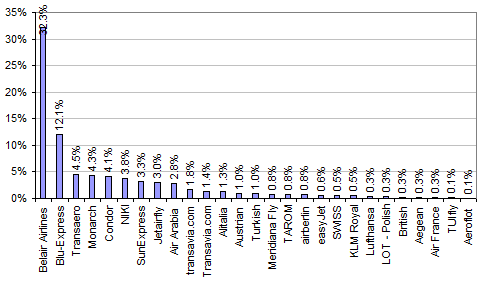