There were 18.85 million domestic passengers in Colombia in 2012, a 14.7% increase compared to 2011 levels, according to Colombian CAA data. On an RPK basis, domestic traffic in Colombia increased by 16.6% to 8.4 trillion RPKs.

Notes: ranking is based on seat capacity data for week commencing 18-Mar-2013. Growth figures are based on passenger data
All passenger/RPK growth data comes from civil aviation authorities except for Argentina in which case the data comes from the country’s privately-owned airport operator.
Supply and demand data used rather than origin and destination data when possible.
Source: CAPA – Centre for Aviation, Brazil’s ANAC, Mexico’s DGAC, Colombia’s CAA, Chile’s CAB, Peru's DGAC and Aeropuertos Argentinas 2000

Domestic traffic in Colombia has now increased by 76% since 2008, when there were only 10.7 million domestic passengers. The growth has been driven by a strong economy, growing middle class and intensifying competition, which has led to lower fares. Colombia’s GDP grew by over 4% in 2012 and by nearly 6% in 2011.

The domestic LCC penetration rate in Colombia was only 3% in 2012, which makes Colombia the second least penetrated domestic market after Russia among the top 20 domestic markets in the world. Over 50% of domestic passengers transported in Mexico and Brazil in 2012 were flown by LCCs.

VivaColombia, which launched services in May-2012, carried 558,000 passengers in its first eight months of operations, according to Colombian CAA data. That made the LCC Colombia’s fifth largest carrier behind Avianca, LAN Colombia, Copa Colombia and Satena. But based on monthly passenger figures for Dec-2012, VivaColombia already passed Satena and Copa Colombia to become the country’s third largest domestic carrier.

Satena accounted for 4% of the domestic market in 2012, followed by 3% for Easyfly and 1% for Antioquia. Satena saw its traffic drop by 10% to 751,000 while Easyfly recorded 18% growth to 633,000 and Antioquia posted 4% growth to 260,000. Satena is a government-owned carrier operating regional jets and turboprops, including on subsidised routes to rural areas, while Easyfly and Antioquia are privately owned turboprop operators. 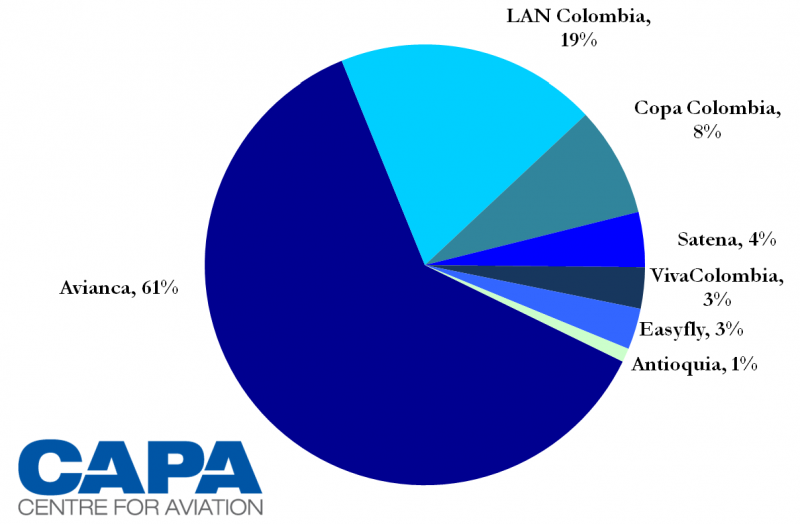 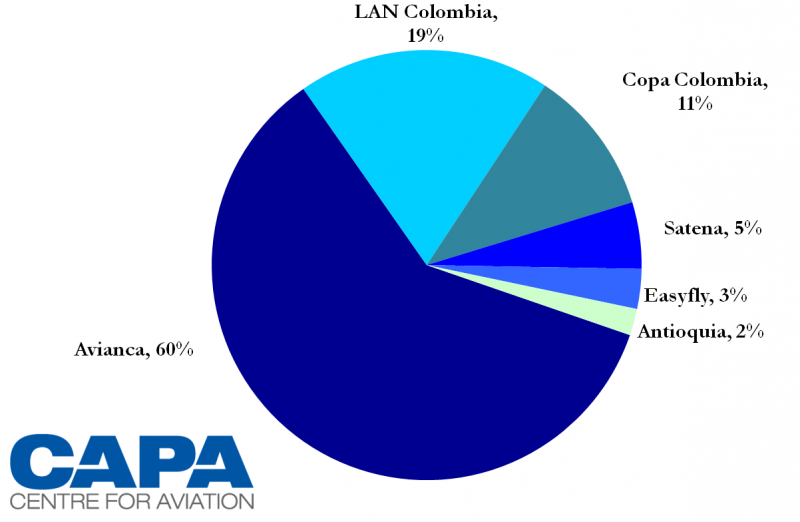 The rapid growth at Avianca has been driven by the launch of services or additional capacity on routes that VivaColombia has launched. The additional domestic passengers carried by Avianca in 2012, about 1.8 million, was more than three times the number of passengers VivaColombia carried.

Colombian CAA data shows that a majority of the growth in Colombia during 2012 was on routes served by VivaColombia. This shows the huge potential for growth in Colombia’s domestic market as VivaColombia enters more markets. VivaColombia follows a Ryanair-like pure LCC model that offers very low fares and relies heavily on ancillaries. The carrier is partially owned by Irelandia Aviation, which is led by Declan Ryan, the son of Ryanair founder Tony Ryan.

Medellin-based VivaColombia’s strategy of focusing on point-to-point routes that bypass congested Bogota, where it currently only operates five daily frequencies, has particularly led to huge growth on routes which were previously un-served or under-served.

For example the Barranquilla-Medellin route saw 192% growth from only 79,000 passengers in 2011 to 232,000 in 2012. The average load factor on the route was 79.1% in 2012, down only 2.5ppt from 2011 despite the huge increase in capacity. This shows there is room for huge market stimulation on point-to-point routes. Barranquilla-Medellin is currently served with 12 weekly VivaColombia and 20 weekly Avianca frequencies, according to Innovata data. Avianca roughly doubled capacity on the route when VivaColombia entered.

Cartagena-Cali showed the most growth among Colombian routes but on a very low base, increasing from only 3,500 passengers in 2011 to 101,000 passengers in 2012. The average load factor on the route was a respectable 80.8% in 2012. Cartagena-Cali is now served with three weekly VivaColombia and 10 weekly Avianca frequencies, according to Innovata. Avianca roughly tripled capacity on the route when VivaColombia entered.

Colombia’s five main trunk routes (above one million annual passengers) also grew but not as rapidly. Bogota-Medellin grew by 17%, Bogota-Cali by 3%, Bogota-Cartagena by 15%, Bogota-Barranquilla by 5% and Bogota-Bucaramanga by 8%. VivaColombia has so far entered three routes from Bogota – Cali, Cartagena and Medellin.

Passenger traffic at Medellin surges 32% in 2012

It is no coincidence that VivaAerobus’ only base, Medellin’s Jose M Cordova Airport, was by far the fastest growing major airport in Colombia in 2012. Passenger traffic at Medellin’s main airport surged 37% to 5.1 million passengers, according to Colombian CAA data. Cartagena also saw rapid growth, increasing 32% to 2.8 million.

Traffic at Bogota still grew 11% to 22.5 million passengers despite congestion. Growth at Colombia’s other two major airports, Cali and Barranquilla, was 14% to 3.7 million and 17% to 1.9 million respectively.

The 15% growth in overall Colombian domestic traffic in 2012 follows much slower growth of only 5% in 2011. But Colombian domestic passenger traffic surged by 13% in 2009 and 30% in 2010 as Aires added 737-700s as part of a new LCC operation on trunk routes. Aires was considered at the time to be Colombia’s first LCC although it continued to follow its original full-service regional carrier model on non-trunk routes.

Aires was nearly bankrupt when it was acquired by LAN in late 2010. Under LAN management, Aires was restructured and transitioned back to a full-service carrier as part of an effort to improve profitability. The result was slower domestic growth for the overall Colombian market in 2011. But after completing the restructuring and rebranding as LAN Colombia in late 2011, the carrier resumed domestic expansion in 2012.

In 2013 LAN Colombia is focusing on international expansion as the carrier deploys a recently acquired fleet of Boeing 767s. LAN Colombia carried only 96,000 international passengers in 2012 giving it only a 1% share of Colombia’s international market. LAN Colombia last year only operated two international routes, linking Bogota with Miami and Sao Paulo (the latter was launched in Jun-2012 at about the time the LAN Group completed its merger with Brazil’s TAM). LAN Colombia is adding capacity on both routes from 01-Apr-2013 by up-gauging from A320s to 767s.

When including sister carriers TACA (El Salvador), TACA Peru, LACSA (Costa Rica) and Aerogal (Ecuador), the Avianca-TACA Group carried 4.4 million international passengers to and from Colombia in 2012, giving it a 51% share of the market. The Copa Group, which includes Panama-based Copa Airlines as well as Copa Colombia, transported 1.5 million international passengers, giving it a 17% share.

The LAN Group accounted only for a 5% share of international passenger traffic in Colombia in 2012, which it is keen to grow as LAN Colombia expands its international operation. American is the largest US carrier serving Colombia and transported almost 500,000 passengers to and from the country in 2012, giving it a 6% share of the total market.

Colombia’s largest international market, the US, saw rapid growth in 2012 and is expected to see more rapid growth in 2013 as open skies was implemented at the beginning of this year. American Airlines saw its passenger traffic in Colombia grow by 14%. Spirit Airlines, the second largest US carrier in Colombia, recorded 10% growth. JetBlue, which launched several routes to Colombia during 2012 and is now the fourth largest US carrier in the market after United, recorded 83% growth.

See related article: Colombia-US open skies to usher in a new era of growth, led by JetBlue and LAN Colombia

Spirit and JetBlue are the only foreign LCCs serving Colombia, giving the country a meagre international LCC penetration rate of 5%.

Colombia’s low LCC penetration rate should lead to opportunities for rapid growth in both the domestic and international markets. The country’s rapidly expanding middle class has a potentially huge appetite for low fares that VivaColombia and US LCCs are only starting to tap.

Infrastructure constraints in Bogota could limit growth at the capital but Colombia has several fast-growing medium size cities which are relatively under-served. VivaColombia, Avianca and Colombia’s regional carriers have shown the potential of offering more direct domestic services between the secondary cities while Copa has succeeded at connecting Colombia’s secondary cities with its less congested Panama City hub. This is just the tip of the iceberg as Colombia continues to emerge as an important growth market.