Domestic RPK growth in Brazil slowed to 6.8% in 2012, after growth of 15.9% in 2011 and 23.5% in 2010, and will likely remain in the single digits in 2013 as the country’s two major carriers continue to reduce capacity in response to challenging market conditions. But Brazil’s two other main domestic players, the new Azul-TRIP group and Avianca Brazil, will continue to expand and take market share away from the leading TAM and Gol groups.

Azul-TRIP and Avianca Brazil have each seen market share gains of between 2 and 3ppt over the last year. Their gains have come at the expense of Gol, which has been cutting capacity and struggling financially after acquiring smaller low-cost carrier Webjet. Gol saw its share of the domestic market slip by about 4ppt in 2012 while TAM has been able to keep its share relatively stable despite reducing capacity by lifting its load factors.

Azul, which unveiled plans in May-2012 to merge with TRIP, captured a 14.5% share of the Brazilian domestic market in 2012, according to newly released RPK figures from Brazil’s ANAC. This includes a 10% share from Azul and 4.5% share from TRIP. Azul and TRIP combined captured only 11.8% of RPKs in Brazil’s domestic market in 2011, when they were still separate independent carriers.

Azul and TRIP in Nov-2012 received conditional preliminary approval from Brazilian anti-trust authorities to proceed with their planned merger. The carriers have already moved to a single reservation system and sales channel and have begun the process of integrating their operations under the Azul brand.

The two carriers currently operate over 120 aircraft and serve a network of about 100 destinations, giving the new group the largest network in the Brazilian industry.

TRIP traditionally has had the lowest load factors in the Brazilian industry while Azul has had some of the highest load factors since the LCC launched services in Dec-2008. While Azul’s load factor in 2012 slipped below 80% for the first time since 2009, to 79.3%, it was only .1ppt below load factor leader Avianca Brazil. TRIP saw its load factor improve from 65.2% to 68%, which is still the lowest among Brazil’s major carriers but the merger with Azul should lead to higher load factors across the TRIP network. 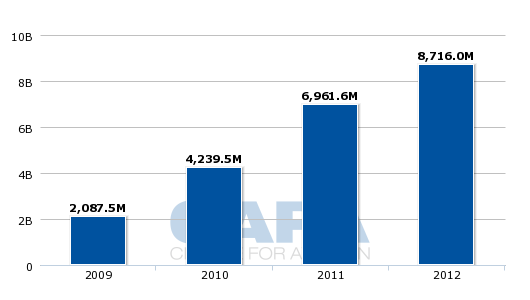 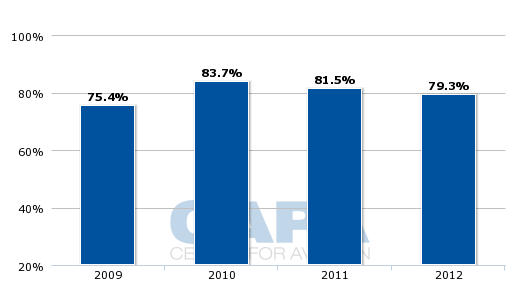 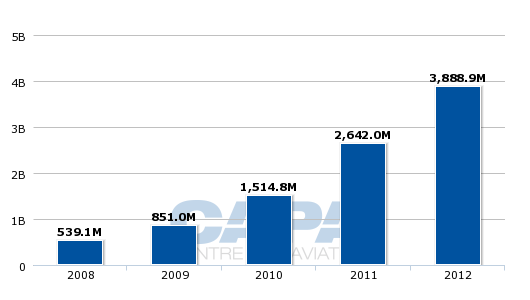 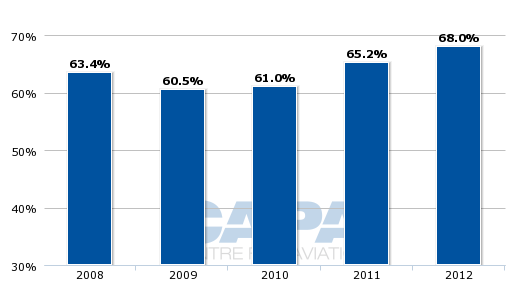 Azul and TRIP will continue to grow in 2013 albeit at a slightly slower clip. In the most recent month, Dec-2012, the duo grew RPKs by 10% and captured exactly a 15% share of the market. As Azul-TRIP continues to expand and as larger Gol and TAM continue to cut capacity, the Azul-TRIP market share could approach the 20% mark by the end of 2013. 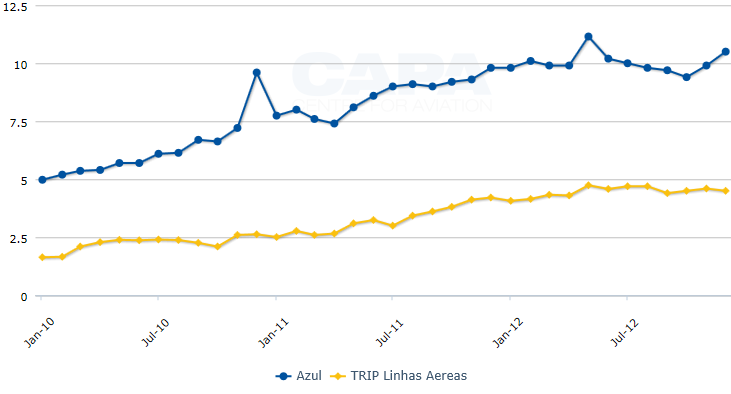 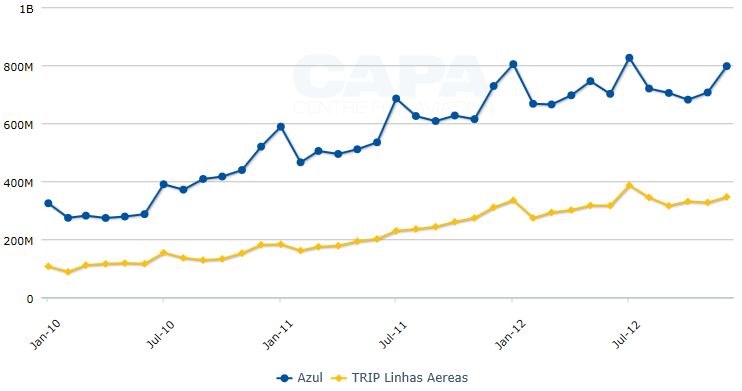 Older full-service carrier Avianca Brazil also has seen its market share rapidly increase since slipping under 3% in 2009 following a restructuring. Avianca Brazil, formerly known as Oceanair, resumed growth in 2010 and pursued even faster growth in 2012. 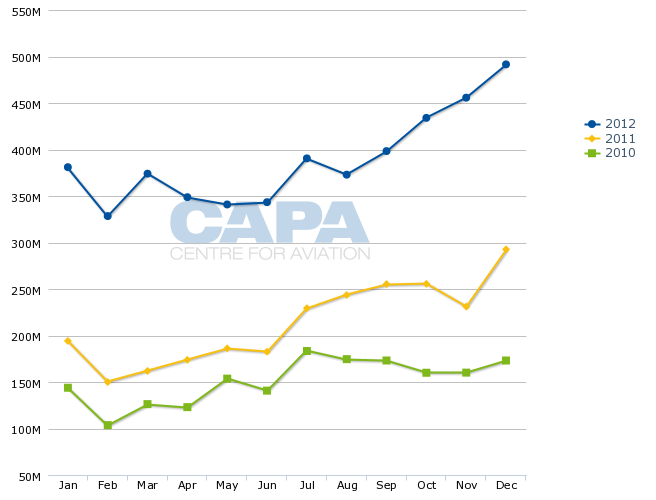 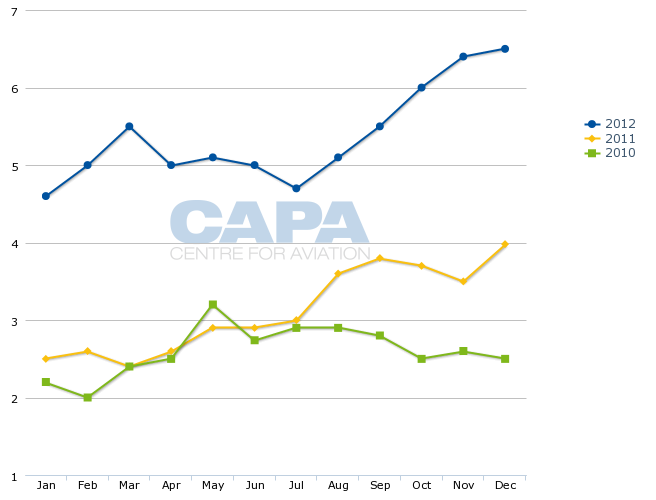 Gol continues to lose market share despite acquisition of Webjet

TAM has been able to maintain its status as Brazil’s largest domestic carrier despite Gol’s purchase of Webjet. After Gol initially unveiled plans in mid-2011 to acquire Webjet it appeared the Gol group would again leapfrog past TAM. But Gol, which was briefly the market leader in 2009 before losing that status to TAM in 2010, spent 2012 in cost and capacity cutting mode in a bid to return to profitability.

Over the course of 2012 Gol several times revised downwards capacity plans for the year. At the end of Nov-2012 it shut down Webjet and moved the remaining Webjet fleet to Gol.

In Dec-2012, the first month Webjet didn’t report separate traffic figures as it was no longer operating, Gol captured 34.4% of Brazil’s domestic market. In Dec-2011, Gol captured 35.1% while Webjet captured 5.9%. As a result the group has seen its market share slip year-over-year by almost 7ppt from 41% to only 34.4%.

The Gol group will likely see its market share slip below 35% in 2013 as it continues to cut capacity. The carrier has said its capacity will be down between 5% and 8% in 1H2013 as the 737-300 fleet previously operated by Webjet will be phased out, leaving the group with a smaller fleet consisting entirely of 737NGs.

In Dec-2012, the first month without Webjet, capacity at the Gol brand was down by 9.5%. But when looking at the figures from a group perspective, capacity was down year-over-year by a sharp 21%. 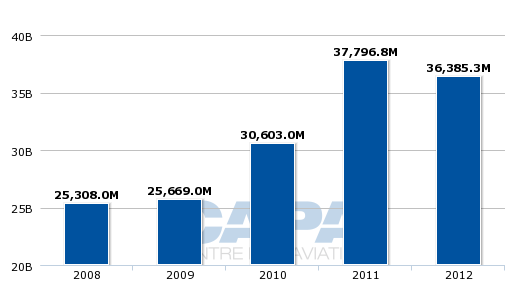 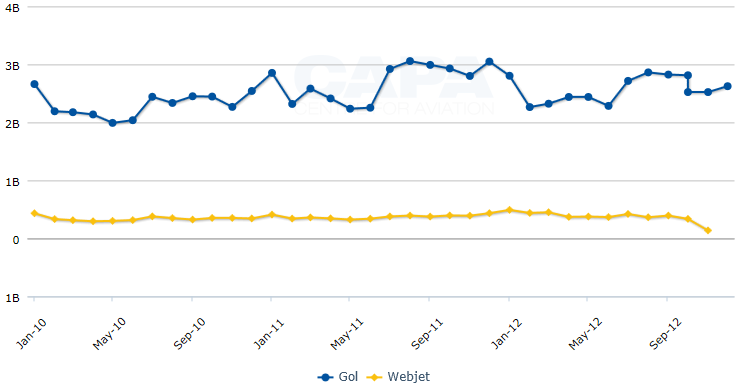 Source: CAPA – Centre for Aviation and Brazil’s ANAC
Note: No Webjet figures for Dec-2012 as Webjet ceased operation at the end of Nov-2012

TAM also has shown capacity discipline over the last year and continues to cut its domestic operation. But it has had success in significantly increasing load factors which has allowed the carrier to maintain its market share and lead position.

TAM’s outlook is also much brighter than Gol as the carrier has a much bigger international operation. Demand for international services in Brazil, particularly to and from the US, remains relatively strong. Competition is less intense in international markets and on many routes demand is currently exceeding supply.

Gol captured only 10.3% of Brazil’s international market in 2012, compared to 10.6% in 2011. Its international capacity for the year dropped 4.9% while RPKs dropped 2.5%. Gol, however, has been growing its international operation in recent months, including launching scheduled services to the US in Dec-2012.

In Dec-2012, Gol’s international ASKs were up 13.9% and this trend is expected to continue into 2013 as Gol starts to focus more on the international market given the challenges domestically. But Gol will need to improve its international load factor, which slipped to 55.4% in Dec-2012 and was only 64.2% for the full year.

Gol faces a challenging 2013 as it continues to restructure. Conditions in Brazil’s domestic market, which Gol relies on more heavily than TAM, remain far from ideal and have cooled significantly since 2011.

There was bound to be a slowdown at some point given the huge capacity that the market has had to absorb in the post-Azul era. Brazil’s LCCs have already succeeded at persuading a majority of interstate bus passengers to take to the skies, leading to a huge increase in the portion of Brazil’s 200 million population that flies.

The impact of the cooling economy has particularly been felt on trunk routes, leading to the cuts at TAM and Gol. Secondary markets and point-to-point routes continue to see relatively faster growth in demand as these markets are less mature. Given their focus on secondary markets and point-to-point routes that bypass Brazil’s congested major airports, further capacity increases at Azul-TRIP should be absorbable. Gol and TAM are hoping their continued capacity restraints will lead to higher load factors and yields and therefore profitability while Avianca Brazil also starts to slow down capacity growth in hopes of becoming profitable.

Brazil remains one of the world’s largest emerging markets and there are huge opportunities for carriers of all types. The consolidation the industry has seen over the last couple of years, leaving four major players that account for 99% of the market, should help lead to the restoration of profitability and a relatively bright medium to long-term outlook.

While 2013 will likely see growth in Brazil’s dynamic aviation market stay in the single digits for the second consecutive year, double-digit growth could resume in the medium-term. A return of growth in the 15% to 25% range as seen in 2009 to 2011 is unlikely but such huge growth is not always healthy – for airlines and for infrastructure, which in Brazil is now buckling as the country struggles to get ready for the 2014 World Cup and 2016 Olympics.