The 23-Nov-2012 decision by Brazilian low-cost carrier Gol to shut down its Webjet subsidiary falls in line with the larger scheme outlined by the company when it initially disclosed plans to acquire its smaller domestic rival in Jul-2011. Shedding Webjet’s smaller and older Boeing 737-300 narrowbodies has always been a long-term plan for Gol as it integrated Webjet into its operations.

The new timeline to eliminate 737-300s from the combined fleet by the end of 1H2013 allows Gol to closely match the capacity cuts planned by its major rival and Brazil’s largest carrier TAM, which earlier unveiled plans to shrink capacity by 7% during the first six months of 2013. The accelerated capacity reductions at Gol, as a result of its decision to close Webjet, continues consistent downward revisions by both Gol and TAM throughout 2012 in an effort to rationalise supply in Brazil’s depressed market, which began showing yield deterioration around the time Gol moved to purchase Webjet.

Even as Gol now works to wind down operations flown under the Webjet brand and cut the older aircraft from its fleet, Gol will retain Webjet’s slots, attained at Brazil’s top airports – arguably the most important aspect of the acquisition. In gaining the necessary regulatory approvals for the acquisition, Gol was not required to relinquish any of the slots. This means Gol will have a strong competitive position against its major rival TAM once the wind down of Webjet is complete and Webjet flights at Brazil's congested slot-controlled airports are transferred over to Gol.

Gol revealed plans to purchase Rio de Janeiro-based Webjet in Jul-2011 for BRL96 million (USD40 million) to strengthen its position in Brazil and greater Latin America, which has seen mega mergers in recent years with LAN-TAM and Avianca-TACA. At the time Gol unveiled the acquisition, the combined domestic market share of Gol and Webjet was roughly 43%, which was equal to TAM’s 43% share.

From the onset, Gol’s plan was to eventually “fly with just one brand – the Gol brand”, said Gol’s CEO Constantino de Oliveira Jr, who was the company’s chief at the time it announced its intention to buy Webjet. But he stated at that time Brazil’s anti-trust regulator CADE would need to approve the full integration of the two carriers, and might insist on maintaining two separate operations.

CADE gave its final blessing to the Gol-Webjet deal in Oct-2012 with no restrictions. During a 14-Nov-2012 3Q2012 call with investors Gol management, now led by new CEO Paulo Kakinoff, explained after the approval Gol was “allowed to get into the Webjet organisation to identify the potential synergies”. He stated Gol’s board members and executive team were drawing up a merger plan and would detail the integration plan within three weeks. At the same time Gol had already consolidated Webjet’s sales exclusively into Gol’s channels, including its website.

Webjet's 737-300s were always destined to exit the combined fleet

Since it announced the Webjet purchase, Gol has remained steadfast in its plans to shed the carrier’s fleet of 737-300s, which stood at 24 at the time it unveiled its pursuit of Webjet. As previously reported by CAPA, 18 of the 24 aircraft were leased from a variety of lessors including GECAS, AWAS, Aviation Capital Group, CIT Aerospace and Macquarie AirFinance.

Many of Webjet’s lessors also lease aircraft to Gol, so it appears Gol became aggressive in its negotiations to return Webjet’s aircraft during a shortened and more favourable time frame. As of the end of 3Q2012, Webjet also operated seven 737-800s, which will cycle back into Gol’s operations once Webjet’s wind down is complete.

Gol’s planned closure of Webjet will not drastically affect the competitive dynamics in the Brazilian domestic market given that Gol will retain a commanding share of slots at the country’s slot-controlled airports. The acquisition of Webjet gave Gol a leading share of slots at Brazil’s busiest airports. At the country’s slot restricted airports – Sao Paulo Congonhas, Sao Paulo Guarulhos and Rio Santos Dumont – Gol’s total 287 slots at the three airports is 32 higher than TAM’s total of 255. 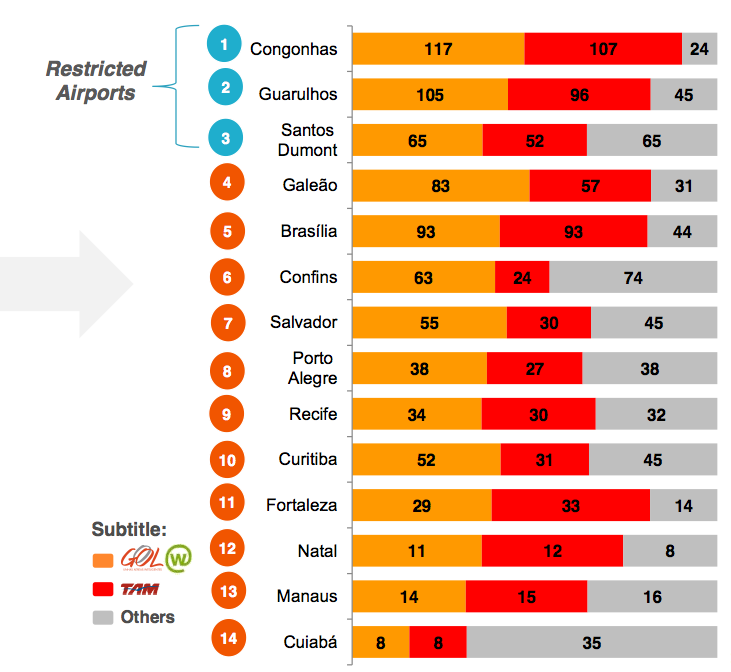 One of the key gains for Gol in the acquisition of Webjet was the smaller carrier’s base at Santos Dumont, located in downtown Rio de Janiero. Schedules in Innovata for the week of 26-Nov-2012 to 02-Dec-2012 show that Gol now holds a 40% seat share at Santos Dumont while TAM holds a 27% share and Webjet has an 11% share. Combined, Gol and Webjet now account for 51% of the airport’s seat capacity. 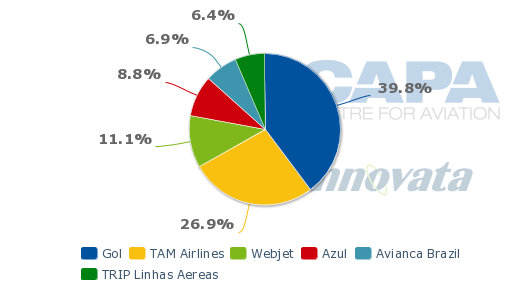 Prior to the Webjet acquisition, Gol already had an edge over TAM in terms of the number of daily flights on offer from Brasilia, Belo Horizonte, Galeao and Porto Alegre. After the purchase Gol surpassed TAM at Santos Dumont, and made gains at Sao Paulo Guarulhos.

Number of daily flights for Gol, TAM and Webjet at major Brazilian airports as of Jul-2011 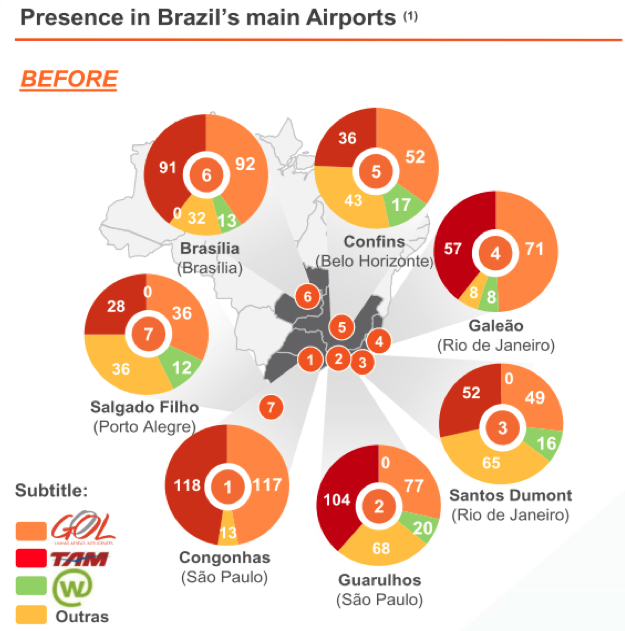 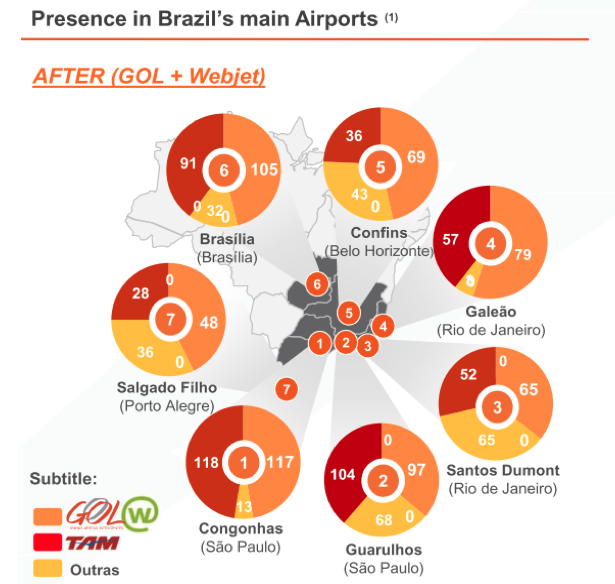 Gol’s plans to shed Webjet’s fleet as part of a domestic capacity reduction will do little to disrupt its commanding seat share lead in most of Brazil’s major airports. In fact its capacity share at major airports in some cases may increase as flights operated wtih Webjet 737-300s are replaced with flights operated by Gol with larger 737-800s.

Webjet’s operations will simply fold into Gol’s operation with some of Webjet's flights, particularly those at slot-controlled airports, absorbed by Gol’s larger gauge aircraft. Gol’s fleet plan as of 30-Sept-2012 showed an increase year-over-year in its 737-800 fleet from 89 aircraft in 2012 to 103 in 2013, with a fall in its number of the -700 model during that same period from 39 to 32 aircraft.

Gol’s announcement that it will phase out Webjet’s 20 737-300s by the end of 1H2013 has allowed the carrier to supply capacity projections for at least part of 2013 after company management declined to offer specific guidance for 2013 during the 3Q2012 earnings call. Factoring in the return of the 20 737-300s, Gol now estimates a 1H2013 fall in its domestic capacity of 5% to 8%. This follows TAM’s latest guidance of a 7% drop in Brazilian capacity during the same time period.

Gol recently declared that it has been more aggressive in cutting domestic capacity throughout 2012 than any other carrier. Combined Gol and Webjet recorded an 8% decline in domestic capacity year-over-year during 3Q2012, and a nearly 2% reduction in the nine months ending 30-Sep-2012. The carrier’s consolidated capacity is projected to fall between 2% and 4.5% for the full-year 2012 after Gol opted to cut 130 loss-making flights from the combined Gol-Webjet network during 2012. TAM now expects its 2012 capacity in the Brazilian domestic market to fall by 2% after originally expecting flat capacity growth for the year.

The capacity restraint introduced by Gol and TAM was meant to combat softening demand in the domestic market ushered in by growing weakness in Brazil’s economy. GDP growth for Brazil for 2012 has been slashed from a previous estimate of 4% to 2%, and Gol in particular has been battling weak yields throughout much of the last year.

During the nine months ending 30-Sep-2012 Gol’s yields grew just 1.6%. The carrier was encouraged by flat yield growth in 3Q2012, reflecting the adjustments it has made to its capacity throughout the year. TAM also reported pressure in yields within Brazil as new parent company LATAM stated that weakness in Brazil helped to drive its consolidated yields down 9% in 3Q2012.

Part of the challenges both Gol and TAM face in seeing a swifter yield recovery from their ongoing decreases in capacity is that smaller carriers in the Brazilian domestic market are continuing with their rapid expansion. According to Brazilian ANAC data, during the first nine months of 2012 Avianca Brazil grew capacity 87% year-over-year, while Azul increased ASKs by 34%. Azul’s merger partner TRIP expanded its supply by 54%, and Webjet’s capacity increased 13% year-over-year.

By contrast Gol’s capacity decreased by nearly 4% during the nine months ending 30-Sep-2012 while TAM’s supply was essentially flat year-over-year. But it appears some of the carriers that have grown rapidly in Brazil’s domestic market during the last couple years intend to slow the pace of their expansion

Avianca Brazil now expects ASK growth of 33% in 2013, down significantly from the estimated 90% expansion of capacity in 2012. Avianca Brazil CEO Jose Efromovich recently told CAPA the carrier plans to focus more on profitability rather than market share, and slowing growth in 2013 makes sense given the current conditions in the Brazilian domestic market.

See related article: Avianca Brazil to slow down expansion in 2013; to benefit from TAP acquisition and Star membership

Gol and TAM also seemed satisfied with giving up market share in order to restore rationality to the Brazilian domestic market place. During the first nine months of 2012 TAM’s market share slipped 1.3 ppts to 40.2% while Gol ceded 3.7 ppts year-over-year resulting in a 39.6% share.

While Gol’s disclosure that it is shuttering Webjet’s operations grabbed headlines, the reality is from the beginning of the acquisition, Gol’s plan was to transition to a single brand and shed Webjet’s older aircraft. The firming up of those plans along with its planned 1H2013 domestic capacity cuts seem more like a tactic to assure investors that it is taking actions to turn its fortunes around after recording a BRL700 million (USD336 million) loss in 2011 and a BRL1 billion (USD480 million) loss for the nine months ending 30-Sep-2012. But with economic conditions in Brazil remaining uncertain, Gol still faces significant challenges in restoring profitability and investor confidence during 2013.