Brazil’s largest carrier TAM is continuing attempts to address excess capacity in the Brazilian domestic market by declaring plans to cut seat capacity on routes within Brazil by 7% during 2013 after refining capacity guidance downwards throughout 2012. TAM executives conclude that Brazil’s sluggish economic growth coupled with over-supply continue to make the operating environment within Brazil challenging.

TAM’s largest rival Gol has also been reining in supply throughout 2012 by cutting 130 unprofitable flights from the combined Gol-Webjet network. Gol is in the midst of merging with its smaller domestic rival after acquiring Webjet in late 2011.

TAM has an advantage of leveraging the larger network of the now-combined LATAM to redeploy assets from the Brazilian domestic market onto more profitable routes within South America. This is not an option readily available to Gol, which is primarily a domestic carrier and does not have subsidaries or affiliates in other Latin American markets. But even as Brazil’s two largest carriers have cut domestic supply and ceded market share, the country’s smaller carriers have continued their explosive growth, which has counteracted some of TAM and Gol’s efforts to neutralise the marketplace.

TAM opted to disclose its capacity cuts for 2013 during an interview CEO Marco Bologna recently conducted with Brazilian financial publication Valor Economico. TAM during 2011 grew domestic supply by roughly 10% year-over-year but is now projecting a 2% to 3% reduction in domestic supply during 2012.

Mr Bologna remarked that beginning in 2009 supply started expanding in the Brazilian domestic market, and now as a result of the country’s slowing economy dulling demand, excess supply remains. Weakening economic growth in Europe and China and slower manufacturing growth in Brazil have weighed down the country’s prospects, as projections for GDP growth for 2012 have fallen from 4% to 2%.

The expansion in Brazilian domestic supply occurred as the country’s GDP growth soared to 7.5% in 2010, followed by growth of only 2.7% in 2011. Gol recently estimated that beginning in 2011 as the macro economic environment turned negative, Brazilian ASK growth expanded by nearly 16% as demand grew by 13%.

Data from Brazil’s ANAC show that domestic supply growth has slowed to roughly 7% through the first eight months of 2012, but TAM and Gol’s financial performance throughout 2012 indicates capacity is still outstripping demand in the Brazilian domestic market. During 1H2012 Gol incurred a loss of BRL756 million (USD373 million). TAM during 1Q2012 saw its profits slide 22% to BRL100 million (USD49 million) and its performance for 2Q2012 swung into the red with a BRL928 million (USD45 million) loss.

The explosion in domestic supply growth by Brazilian carriers that got underway during 2009 was a reflection of the country’s expanding middle class, and the corresponding rise in discretionary income that group was willing to dedicate to air travel. Gol estimates the middle class in Brazil now accounts for about 55% of the Brazilian population and represents 46% of the country’s purchasing power. 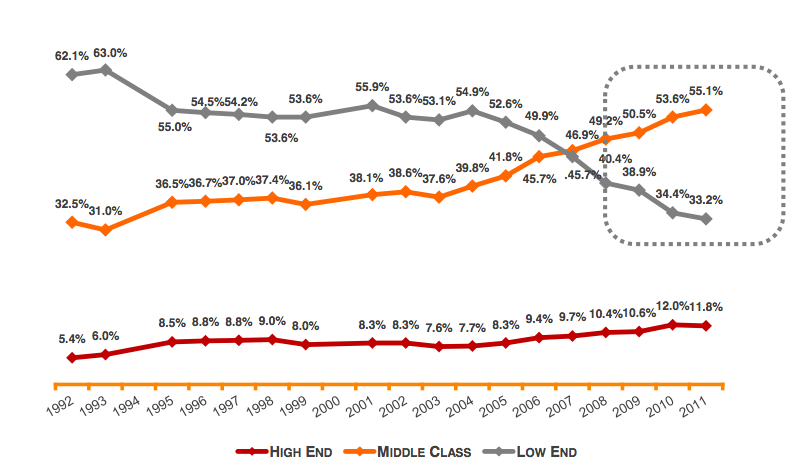 Gol also believes much opportunity exists in Brazil to drive air traffic growth among the middle class as the country is the third lowest among major countries with respect to domestic passenger penetration. 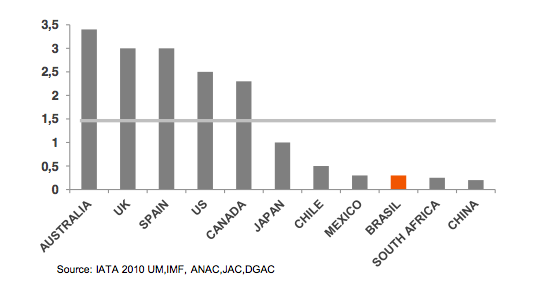 But in the short term Brazil’s growing middle class remains price sensitive, which along with oversupply is weakening yield and pressuring load factors for the country’s airlines. Earlier in 2012 TAM concluded that customers in the Brazilian domestic market were becoming more price adverse as the country’s economy continued to slow.

Gol’s yields grew by just 0.8% during 2Q2012 and saw a modest increase of 1.6% for 1H2012. While TAM reported much better yield growth of 14.3% during 2Q2012, its decision to publicly declare its intention to cut its 2013 domestic supply by 7% reflects its conclusion that demand will continue to remain weak.

Even as Brazil’s middle class has become price sensitive as economic trends create weakness and uncertainty, the country’s smaller carriers have continued to grow rapidly. But their growth has not been on trunk routes but markets with little or no direct access to air travel.

Both Avianca Brazil and Azul recorded declines in load factor year-over-year. Avianca Brazil’s loads declined about 5ppt to 75% while Azul saw its load factor drop to 75% compared to 83% during the year-prior. TRIP’s load factor grew a single ppt to 64%, which was likely driven by its network footprint into smaller markets where it is more shielded from competition.

In May-2012 Azul revealed plans to merge with its fellow regional carrier TRIP. Based on Aug-2012 ANAC data, the two carriers account for about 15% of Brazil's domestic market.

The combined capacity growth for Azul and TRIP during Aug-2012 was 71%, and for the first eight months of 2012 the two carriers together posted a 94% rise in capacity. That compares with a 3% drop for Gol and 1% growth at TAM. As its capacity has declined Gol has ceded some market share to rivals as its portion of the domestic market fell 5ppt year-over-year to 33% while its merger partner Webjet gained just a single point to account for a 6% share.

Azul and TRIP have previously stated they expect regulatory approval for their merger from Brazilian authorities by year-end. They recently gained authority to begin codesharing in Dec-2012. TRIP CEO Mario Caprioli recently told the local Brazilian press that once the merger is complete the Azul brand would be retained, but coupled with a new logo that references the TRIP brand.

But even as those carriers continue to chart growth, it appears they are not immune from the realities of the domestic market. In early Sep-2012 Azul chairman David Neeleman was quoted in press reports saying slow growth, new taxes and fees were curbing passenger demand. He predicted that Brazilian traffic during 2H2012 wouldn’t register its normal uptick during the back half of the year. The slowdown in demand will likely result in Azul missing a previously state goal of attaining a 15% share of the domestic market by the end of 2012.

It is not clear if, or how much, Brazil’s smaller carriers will dial back their growth. One of the advantages that emerged through the combination of Azul and TRIP was the two carriers had little network overlap, with Azul benefitting from TRIP’s more diverse network that spans further into Brazil’s interior than Azul’s stand-alone route offerings.

With such little network overlap, it is unlikely capacity growth is part of the strategy for the combined Azul-TRIP, which will serve roughly 100 airports. The carriers could conclude that further capacity growth is necessary to reach their desired scale and market share goals.

New LAN and TAM parent company LATAM should disclose more details regarding how TAM will achieve its planned 2013 domestic capacity reduction in the coming weeks. But it is clear that management of the new parent company is determined to ensure the Brazilian domestic market does not drag down the combined company’s results. LATAM management previously stated it could manage TAM’s projected 2% to 3% fall in domestic capacity for 2012 by redeploying aircraft elsewhere throughout the broader LATAM network where conditions are better.

There is no reason why that strategy could not be applied to handle the planned 2013 reductions. LATAM has domestic operations in six other domestic markets in South America – Argentina, Chile, Colombia, Ecuador, Paraguay and Peru. In some of these markets conditions remain favourable and competition is less intense. There is also growing demand in the international intra-Latin America market, a highly profitable market where LAN in recent years has been adding significant capacity.

Joining Mr Bologna in the Valor Economico interview, the VP of TAM’s domestic unit Claudia Sender remarked that TAM would reduce aircraft utilisation to achieve some of the capacity reductions, noting that the average number of hours flown per aircraft would drop from 13h to 12h15m during 1H2013. Mr Bologna stated TAM has not yet determined the exact number of daily flights being cut, but assured that TAM would retain a presence in 42 airports throughout Brazil even as capacity falls.

Through the consolidation of LAN-TAM, Gol-Webjet and Azul-TRIP, coupled with softening demand, Brazil’s domestic marketplace has witnessed rapidly changing market dynamics during the last couple of years that have largely been to the detriment of the country’s bigger carriers. But now even the country’s smaller and nimble operators are beginning to feel the continued pressure from weakening demand. The operating environment in 2013 could put both Brazil’s larger and smaller carriers to the test if the push by the country's two biggest carriers to rationalise supply proves to be insufficient.