Brussels Airlines plans to further expand capacity on African routes in 2012 while shrinking its European operation as Boeing 737s are phased out as part of a narrowbody fleet simplification initiative. The Lufthansa Group subsidiary will also resume service to New York in 2012, a move made possible by expansion of its A330 fleet and designed primarily to better serve the fast-growing US-Africa market.

Africa has been a second home market and the main focus for Brussels Airlines since it became part of the Lufthansa Group and entered the Star Alliance in 2009. The carrier is keen to continue this focus as the European market becomes even more challenging for small flag carriers given the region’s banking crisis and increasing competition from low-cost carriers. As an emerging market with huge potential and limited competition, Africa offers carriers from mature markets opportunities for growth and the increasingly unusual combination of high yields plus high load factors.

Although it is a relatively small carrier by Western European standards, Brussels Airlines is uniquely positioned to exploit the potential opportunities in Africa because of its African roots. Belgium has longstanding economic, cultural and economic ties with Africa. Predecessor carrier Sabena served the continent for over 75 years before ceasing operations in 2001.

Following its launch in 2002, SN Brussels, which later merged with Virgin Express and adopted the current Brussels Airlines brand, picked up several of Sabena’s routes. Rapid expansion in Africa has been pursued over the last three years following Lufthansa’s acquisition of a 45% stake in Brussels Airlines parent company SN Airholdling and the carrier’s entrance into Star.

Back in 2009 Star had a relatively weak presence in Africa with rather small African networks from European members including Lufthansa and only one African member, South African Airlines, which at the time had a predominately Europe-focused network. Star has since recruited two new African members in EgyptAir and most recently Ethiopian Airlines. But Brussels Airlines remains a key component in Star’s coverage of West Africa, which accounts for 14 of the carrier’s 22 African destinations.

“Next year we won’t increase the number of destinations but rather improve the thickness of our network,” Mr Gustin told CAPA at a Star Alliance event in Ethiopia earlier this month. “We still have some destinations where we have too little frequency. We’ve added seven destinations over the last month 18 months. So it’s now about improving frequency and being a bit more present.”

Brussels Airlines is able to expand capacity across its long-haul network as it adds two A330-200s to supplement its existing fleet of five A330-300s. Mr Gustin says the carrier’s A330 fleet is now exclusively used for African services but he adds that “the exception will come next year” as Brussels Airlines also begins to use is A330-300s to serve New York. The newly added A330-200s, one of which has already been delivered, are coming from Lufthansa subsidiary Swiss and will be allocated to African routes (of Brussels Airlines’ 22 African destinations only the two new Moroccan routes are served with narrowbody aircraft).

Brussels Airlines sees New York as an important part of its African strategy because 15% of its African passengers originate in the US or make the country their destination. Mr Gustin says Brussels Airlines plans to carry a large portion of this traffic on its New York flights, which will begin in Jun-2012 with a daily service to JFK Airport. But he points out that Brussels-New York is also a big point-to-point market.

Brussels Airlines has been relying the last two years on its Star partners for the trans-Atlantic leg of US-Africa itineraries. The carrier currently codeshares with United on Chicago, Newark and Washington Dulles to Brussels, and with US Airways on Philadelphia-Brussels. Brussels or SN Brussels has never served New York although predecessor Sabena operated to New York until it went bust in 2001.

By operating to the US with its own metal, Brussels Airlines will ensure it has the seats needed to compete in the fast-growing and lucrative US-Africa market. At New York, the carrier could also potentially link up with JetBlue, which has a large domestic operation at JFK and is keen to work with as many foreign carriers as possible. Several Star members including Lufthansa, Singapore Airlines and South African Airways already have codeshare or interline partnerships with JetBlue.

Lufthansa owns a minority stake in JetBlue, making a Brussels-JetBlue tie up even more likely. (Lufthansa in recent months has expressed interest in selling its stake in JetBlue.) While New York accounts for a large portion of US-Africa passengers, a codeshare or even interline with JetBlue will give Brussels Airlines improved access to the broader US-Africa market. It now has to rely on domestic seats from US Airways at Philadelphia and United at Chicago, Newark and Washington, which can be hard to obtain given the high load factors and domestic capacity reductions at US carriers.

Assuming one of the Brussels’ five A330-300s is allocated to the New York route, the carrier’s African operation will grow from five A330-300s to four A330-300s plus two A330-200s. The carrier earlier this month announced plans to increase frequencies from Apr-2012 to five African destinations along with a product upgrade for its long-haul fleet. The revamped long-haul product will feature lie-flat business class seats and new in-flight entertainment (IFE) with details to be unveiled in early 2012. 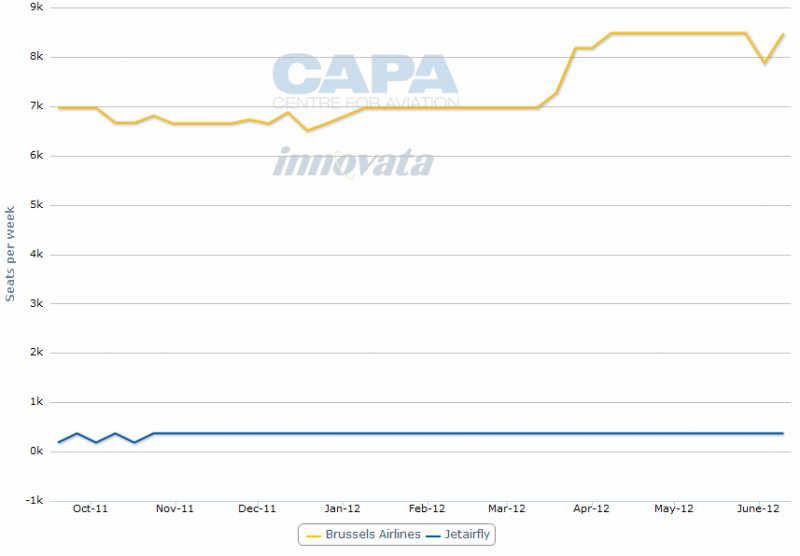 The third and fourth largest carriers in the Europe-Central/West Africa market are British Airways and TAP Portugal, both with 8% of current capacity (seats). Lufthansa is the fifth largest carrier in the market with 7% of total capacity. Brussels Airline and Lufthansa closely coordinate their African operations, with Lufthansa typically serving markets that Brussels Airlines does not serve with its own aircraft. 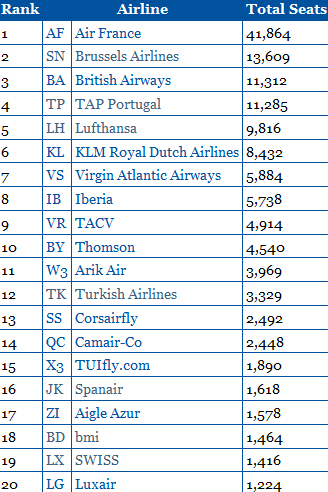 Brussels Airlines added capacity across its European network earlier this year as it took delivery of four additional A319s and its first two A320s in 1H2011, more than offsetting the return of five Avro RJs. As a result the number of weekly flights in Europe increased by 4% compared to summer 2010 and by 8% compared to the winter 2010/11 schedule. Brussels Airlines short/medium-haul network consists of 45 destinations across 17 countries.

The growth in Europe as well as in Africa has driven large increases in passenger traffic this year, including 24% for the month of Sep-2011 and 18% to 19% for the months of May, June, July and August. In nine of the first 11 months of 2011, year-over-year passenger growth has been in the double digits while RPK growth has been in the double digits 10 out of 11 months. Brussels Airlines was also able to record 4% passenger growth in 2010 to 4.89 million passengers despite the impact of the European ash cloud. 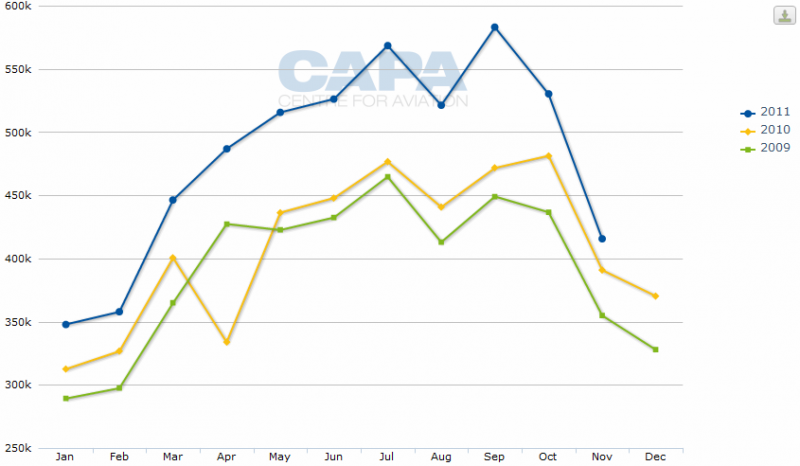 While the carrier will likely continue to record big increases in RPKs, driven by expansion of the long-haul network, total passenger numbers could decrease next year as short-haul flights are reduced. The carrier will continue to add A319s and A320s, which will form the backbone of its simplified narrowbody fleet, but this will not offset the capacity lost from the phase out in 2012 of the 737s. Brussels Airlines is also expected to phase out its remaining Avro RJs over the medium-term.

Brussels Airline now has a total of about 4700 seats in its narrowbody fleet, up from about 4300 seats at the beginning of last year. Assuming an overall reduction of five aircraft, the total seat count across the carrier’s narrowbody fleet should end next year at just below 4,000. As a result the capacity increase in Europe implemented for the summer 2011 schedule will be reversed and the carrier’s European operation in 2012 will also likely be slightly below 2010 levels. “We need to invest where we are strong – which is long-haul in Africa – and we need to reduce a little bit in Europe because of the low-cost competition,” Mr Gustin explains.

Africa already accounts for 53% of the carrier’s ASKs, compared to 44% for Europe and 3% for the Middle East (Brussels Airlines has only one destination in the Middle East, Tel Aviv, but it is the carrier’s eight largest route based on ASKs). The African portion of total capacity will grow even further next year. 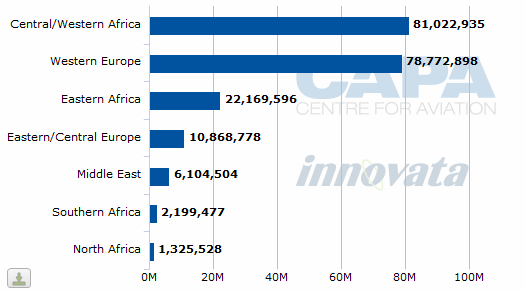 The focus on Africa is wise as competition on short-haul routes within Europe is much fiercer. Market conditions in Europe are likely to get even tougher in 2012 as the banking crisis and recession will likely affect demand to/from the capital of the European Commission.

While it has low-cost DNA that it inherited from Virgin Express, Brussels Airlines is at a strategic advantage to focus on long-haul African markets. It faces limited competition on most of its African routes, particularly out of Brussels but also in the broader Europe-Africa market which it serves with a connection product.

Europe-Africa, US-Africa and intra-West Africa are markets that continue to be characterised by high yields and under-capacity, making them far more attractive than the intra-Europe market. In the European market, there is little growth and increasing competition from low-cost carriers.

Ryanair already has nearly as many seats between Belgium and the rest of Europe as Brussels Airlines and will likely become the biggest carrier in this market next year. But in terms of group capacity the Lufthansa Group will continue to be the market leader. Another LCC, easyjet, is now the third largest airline group in the Belgium-Europe market, when including flights operated by subsidiary easyJet Switzerland (see Background information). 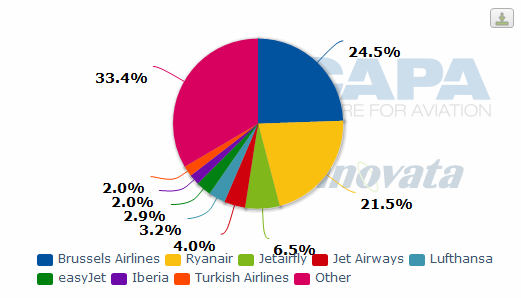 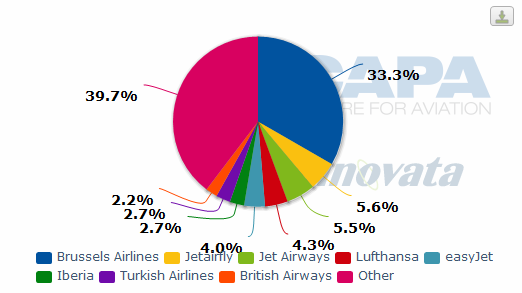 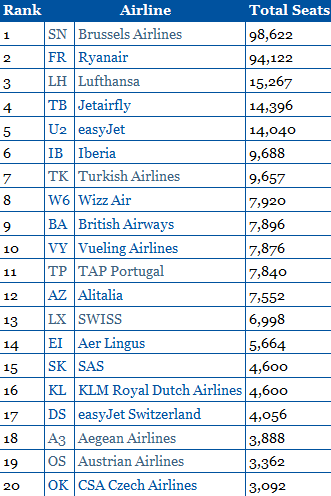