Brazil’s third largest domestic airline Azul has been forced to curb its once rapid growth as the country’s economy will endure its second consecutive year of contraction during 2016. Similarly to all Brazilian airlines, Azul has been plagued by soft domestic demand and a sharp currency decline that creates challenges for expenses denominated in the USD – such as fuel and aircraft costs.

Although it will take some time for Brazil’s economy to recover fully from its current recession, some encouraging trends are beginning to take effect. Recently the BRL has gained some ground against the USD, which is a welcome sign for Brazilian airlines.

Azul has used many tools to adapt to Brazil’s current economic slump, including a new relationship with the European airline TAP and equity infusions from foreign investors. It has also show a willingness to lower fares in some markets, particularly to the US, to ensure that it retains a strong market presence once Brazil embarks on a steady path to economic recovery.

Before the economic downturn in Brazil, and the ripple effects on South America, Azul was one of the fastest-growing airlines in Brazil, reflected in its 44% domestic ASK growth for 1H2014. The country’s economy started weakening in late 2014, evident in flat GDP growth for the year. Brazil’s economy contracted 3% in 2015 and is expected to shrink by 1% in 2016.

For the first half of 2016 Azul’s domestic capacity fell 4% year-on-year and its traffic declined 6%, according to data from Brazil’s ANAC. The number of domestic passengers transported by Azul during that period fell from 10 million to 9.4 million.

Data from CAPA and OAG show that Azul’s system-wide seats are markedly down in 2016 compared with 2014, driven by its domestic capacity pull-down. 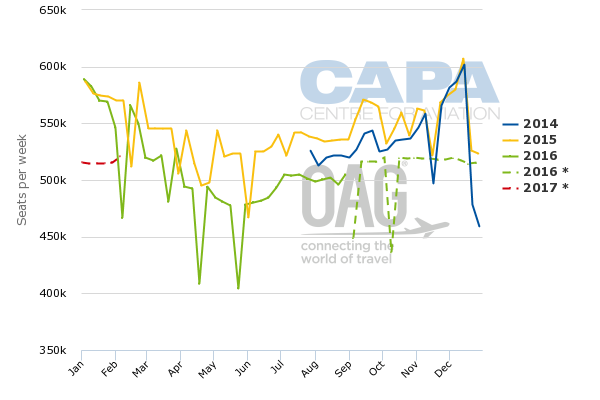 Although Azul has branched out into several international markets during the last couple of years, only 2% of its seats are deployed on international routes and 17% of its ASKs are dedicated to routes outside Brazil. 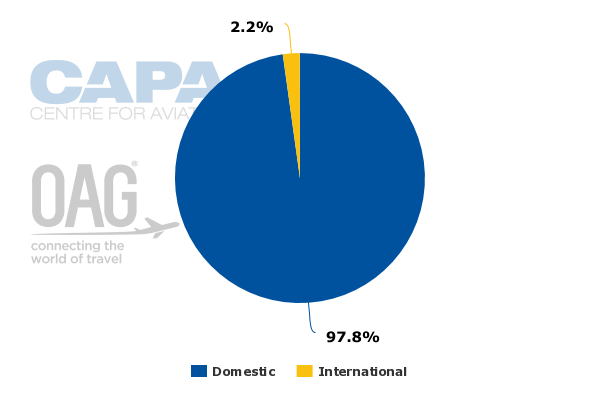 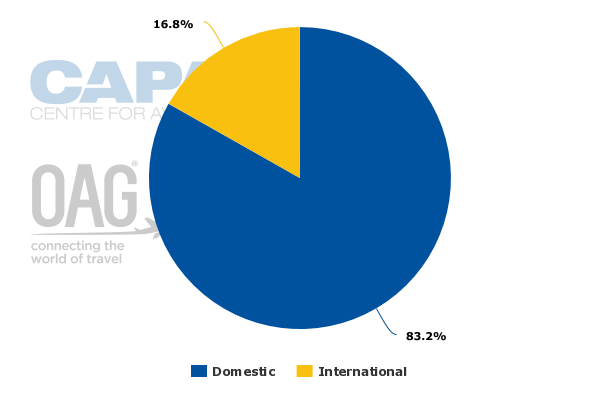 Of the four largest Brazilian domestic airlines, only Avianca Brazil grew ASKs in 1H2016 by 14%. The country’s two biggest carriers, Gol and LATAM Airlines Brazil, reduced capacity by 6% and 11%, respectively. Avianca Brazil’s traffic grew by 14% in that time period, but the airline is no doubt trading yields for traffic growth in order to advance its position in the domestic market. Its market share increased from 9% to 11% year-on-year in 1H2016, while Azul’s remained flat at 17%. LATAM Airlines Brazil’s share decreased from 37% to 35%, and Gol’s was flat at 36%.

The majority of Latin America’s airline groups – Avianca Holdings, LATAM Airlines Group, Copa and Gol – have all adjusted their fleet commitments to adapt to the region’s economic weakness. Azul has also worked to right-size its fleet to Brazil’s economic reality, albeit with a different method from using aircraft deferrals.

Azul has transferred 17 aircraft to TAP Air Portugal, and according to the news outlet Bloomberg it has returned three aircraft to lessors.

Source: CAPA Fleet Database
Orders include those placed directly by the operator and by lessors assigned to the operator, from 1-Sep-2016 onwards.

Azul’s founder and Chairman David Neeleman is a member of the consortium that purchased TAP Air Portugal in 2015.

Since that time Azul and TAP have strengthened their ties, including the forging of a codeshare agreement that leverages Azul’s strong position in the domestic market and TAP’s stature as the largest airline operating between Europe and Brazil.

In conjunction with its deepening relationship with TAP, Azul introduced service to Lisbon from Campinas Viracopos in May-2016 – its first trans-Atlantic flight and the first low cost airline service between South America and Europe. The Campinas-Lisbon service had been previously operated by TAP, so Azul has some knowledge of demand patterns and opportunities for feed on both ends of the pairing.

In 2016 Azul has also added flights from Porto Alegre to Montevideo, Uruguay, which marks its second market in South America after its 2015 introduction of service from Belem to Cayenne, French Guiana, on a route operated by Surinam Airways. Azul is uncontested on service to Montevideo from Porto Alegre. Schedules in CAPA and OAG show that Gol dropped the route in early 2016.

Azul is rounding out its international expansion in 2016 with new service from Recife to Orlando in Dec-2016. Azul already serves Orlando from Campinas. The airline’s other US market is Fort Lauderdale, which is also served from Azul’s largest base and headquarters of Campinas.

The airline briefly served Belo Horizonte-Orlando, but ended that service in early 2016. At the time when Azul unveiled the new service from Belo Horizonte the company noted that many passengers in Belo Horizonte were connecting through Campinas for flights to Orlando, but demand inside, and to and from, Brazil has continued to soften since Azul’s launch of the route in late 2015.

During 2Q2015 Azul cited pricing pressure from US airlines in its US markets, and because Brazil’s economy has weakened, so too have fares. Recently Azul Chairman David Neeleman told the news outlet The Miami Herald that Azul had adjusted to weaker demand by lowering fares. The logic is that Brazilians are fond of South Florida, and Azul wants them to continue travelling to Florida despite the weakened BRL. Azul’s load factors to South Florida have remained strong, said Mr Neeleman, who has said that keeping Azul’s aircraft full on its routes to Florida was an investment.

Azul is scheduled to take delivery of the first of 63 Airbus A320neo family aircraft that it has on order late in 2016. CAPA’s fleet database shows the airline will accept six of the jets by year-end. In his interview with the Miami Herald Mr Neeleman cited the aircraft’s efficiency as a way for Azul to grow markets by offering lower prices. 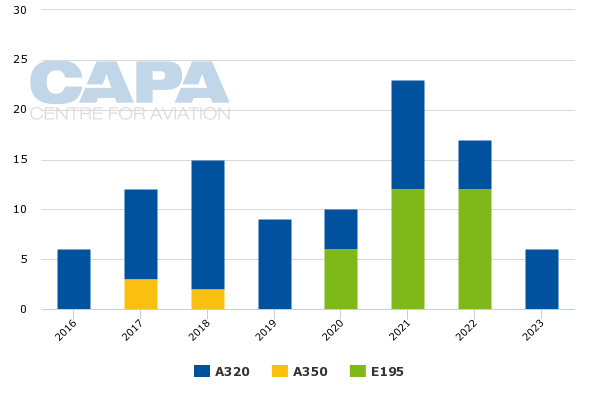 Source: CAPA Fleet Database
Aircraft operated by subsidiaries/associates of the main airline may be listed separately.
Firm orders include those placed directly by the operator and by lessors assigned to the operator, from 29-Aug-2016 onwards.
Excludes aircraft for which the delivery date has not been announced, cannot be reasonably projected or is unlikely to be delivered.

In 2014, prior to Brazil’s economic downturn beginning in full force, Azul stated that it planned to use the new narrowbodies on domestic long haul routes with high demand, targeted at leisure travellers, including the Northeast of Brazil. At the time CAPA concluded:

See related report: Brazil airline Azul caps off an ambitious 2014 with another stab at accessing the public markets

Conditions in Brazil’s domestic market have worsened considerably since 2014 and some of the routes under consideration by Azul for the new narrowbodies may now be unviable. The Airbus jets have the range for several destinations within South America and – based on Mr Neeleman’s comments – Azul remains bullish on stimulatory opportunities with the aircraft in the region, despite Brazil’s recession.

Azul has benefitted from equity infusions of USD100 million by United Airlines and USD450 million from the HNA Group. The investments were key as credit markets are essentially closed off to Brazilian companies. Those equity injections, along with having the benefit of shared resources with TAP, allow Azul some flexibility not enjoyed by its rival Gol, which has endured a complex debt restructure in order to stave off a formal restructuring. LATAM Airlines Brazil has also benefitted from being part of the larger LATAM Airlines Group, which recently received a pledge from Qatar for an investment of USD163 million.

Azul continues to face the uncertainties ushered in by weak demand in the Brazilian domestic market and for now the specifics of how the airline intends to use its Airbus narrowbodies remain unclear. But Azul clearly has worked to build a strong base of resources on which to draw as Brazil’s economy remains weak.