Brazilian airline Azul continues to shake up the country’s aviation business in CY2014 through the launch of widebody operations, an order for Airbus narrowbodies and resuscitating its initial public offering that was shelved in CY2013.

Azul is basing its ambitions on the conclusion that there is significant upside for air travel in Brazil as growth projections over the medium to long term remain relatively robust. The airline believes it has built a solid network to accommodate the long-term demand, and is now making its case to potential investors that it is positioned to leverage the anticipated growth.

But the challenges Brazil’s airlines have faced in the short term – namely a fragile economy – remain intact, and it is not certain if the market will rise to meet Azul’s ambition.

Azul’s road to an IPO is marked with rapid expansion

Azul shelved plans for an IPO in CY2013, citing unfavourable market conditions. Since that time the airline has acquired Airbus widebodies and launched its first international service to Fort Lauderdale. The airline is now capping off a watershed 2014 with the announcement it is acquiring 63 Airbus A320neo narrowbodies for delivery beginning in CY2016. In the span of two years Azul will have jumped from the operation of Embraer E-Jets and ATR turboprops to the operation of four fleet types – E-Jets, ATRs, Airbus widebodies and Airbus narrowbodies.

Using data from the Brazilian government, Azul estimates that it achieved a nearly 17% market share as of 30-Sep-2014 compared with just a 3% share at YE2009.

Azul touts its network strength and revenue premium versus its competitors

Azul believes connecting smaller markets not viable for narrowbodies operated by its major competitors Gol and TAM through its hubs in Campinas and Belo Horizonte allows it to achieve a revenue premium to some of its competitors. For the 9M ending 30-Sep-2014 Azul stated it generated a 43% PRASK premium over rival Gol. For that nine month period Azul’s passenger unit revenues increased 8% and its operating unit revenues grew 7%. The airline’s yields increased roughly 6% year-on-year.

Azul’s main base and largest hub is Campinas Viracopos, roughly 100km north of Sao Paulo Guarulhos, and is one of three major airports serving Sao Paulo state in addition to Guarulhos and Congonhas. Prior to Azul’s launch Campinas was underserved, but passenger throughput has increased with Azul’s expansion from five million in CY2010 to 9.3 million in CY2013. 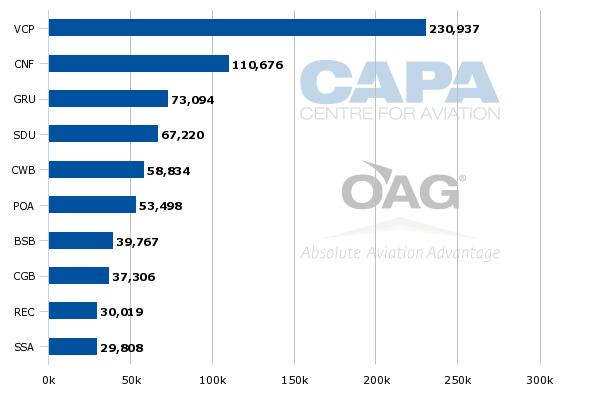 Illustrating its stimulative effect in under-served markets, Azul supplied data from Campinas Viracopos to Rio de Janeiro, Salvador, Belo Horizonte and Porto Alegre and from Belo Horizonte to Goiânia, charting the growth in those markets after its launch. Between Viracopos and Rio de Janeiro, Azul estimates that total direct flights jumped from six to 31 from Nov-2008 to Sep-2014, with Azul representing 22 of the flights. Average one-way daily enplanements have grown from 564 to 2,492. There was no direct service from Campinas Viracopos to Porte Alegre in Nov-2008, with roughly 241 enplaned passengers connecting on the route. During Sep-2014 the number of directly enplaned passengers grew to 1,068.

Azul believes significant stimulative opportunities remain in Brazil, and projects that domestic passenger counts will rise to 122 million by 2017, and increase of 32 million from the 90 million transported in CY2013. The airline also estimated that domestic passengers travel on 0.4 flight segments per year compared with 2.6 in the more mature US market (US figures are based on 2012 data).

Those projections were no doubt a factor in Azul’s decision to order up to 63 Airbus A320neos comprised of 28 leased aircraft due for delivery between 2016 and 2019 and 35 firm purchase orders with Airbus, with deliveries scheduled to begin in 2020 and continue through 2023.

Azul stated it plans to use the narrowbodies on domestic long-haul routes “with high demand targeted at leisure travellers, including the Northeast of Brazil”. Once that phase of Azul’s growth begins, its overlap with its major domestic competitors Gol and TAM is likely to increase. It is a significant amount of growth, even for what Azul believes is untapped demand within Brazil.

Azul’s declaration of targeting leisure customers with its new narrowbodies is also tenuous given that economic growth in Brazil has been tepid after significant growth in 2010. GDP growth for CY2014 is projected at 0.3, rising to a forecasted 1.4% in CY2014. Inflation, meanwhile appears to be hovering at 6% in CY2014 and CY2015. 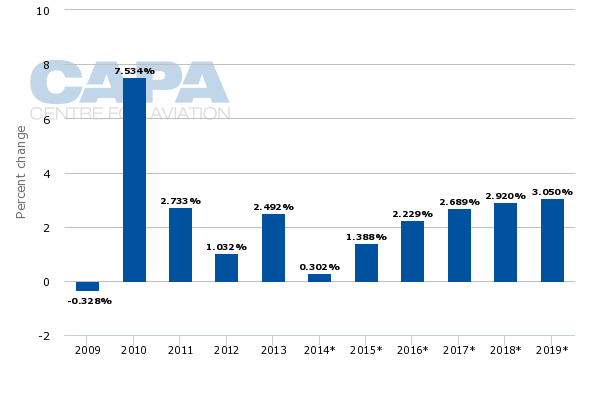 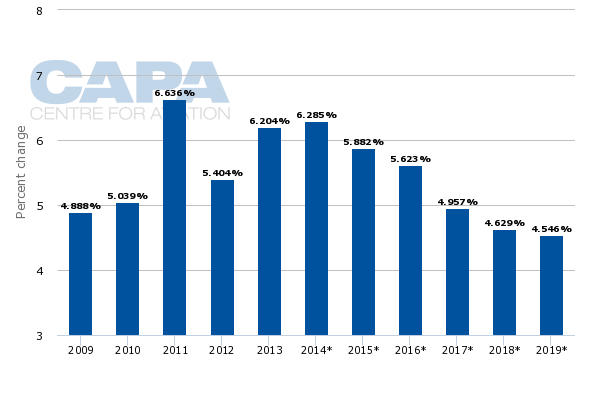 Traffic in the Brazilian domestic market grew at a healthy 7% clip in 1H2014; but that was driven by flat capacity growth stemming largely from restraint by Gol and TAM. Azul’s declaration to enter into long-haul domestic markets could prove disruptive in Brazil’s domestic traffic growth.

Azul embarks on a public offering with mixed financial results

Azul is accessing the public markets when certain challenges in Brazil seem to be becoming a mainstay – overall economic weakness and currency devaluation. Those obstacles resulted in Gol now suffering from chronic unprofitability, and TAM leveraging the scale of LATAM Airlines Group to diminish its currency exposure.

Arguably, Azul has operated with a high level of ambition since its 2008 launch, reflected in its rapid growth and its pursuit and ultimate acquisition of rival TRIP in 2012.

The next chapter of Azul’s evolution could be its most ambitious yet as it works to build up a fleet of 12 Airbus widebody aircraft, introduces narrowbodies into the Brazilian domestic market and adapts to the changes that becoming a publicly traded company will usher in.

It is a tall order for such a young company – but so far Azul seems undaunted by the challenges it has faced in its six-year existence. However, the next phase of its growth may require a new level of resolve.