Australia needs to urgently negotiate expanded international air capacity which is constraining access to services from some of the country’s most important markets in Asia along with the United Arab Emirates. Capacity for several Asian markets, including China, Hong Kong, Vietnam, Malaysia and the Philippines, is fully utilised by carriers from those countries which are important source markets for both tourism and trade.

The Australian Government is being criticised for not negotiating new bilateral capacity to keep pace with demand. Melbourne Airport CEO Chris Woodruff said at the Australian Airports Association convention in Nov-2012: “These agreements provide the framework in which we can go out to the international market and attract new air services to meet the increasing demand for travel to and from Australia. The Government needs to lead from the front on this issue. Our bilateral agreements need to provide plenty of capacity for future growth in passenger numbers.”

Failure to grow capacity rights ahead of demand risked airlines choosing destinations other than Australia in the competition for new services.

Chinese airlines have already exhausted their bilateral capacity to Australia

The Australia-China bilateral capacity was increased by more than 50% under a memorandum of understanding (MoU) agreed in 2011. China is Australia’s second largest source of international visitor arrivals after New Zealand.

The actual number of seats operated varies throughout the year but the entire bilateral capacity was used in Feb-2013. More than 110,000 Chinese visitors arrived in Feb-2013 due to the start of the Chinese New Year, the biggest number in a single month and accounting for one in five of all international visitors. In Apr-2013 the four airlines serving Australia are collectively operating about 18,400 seats per week. 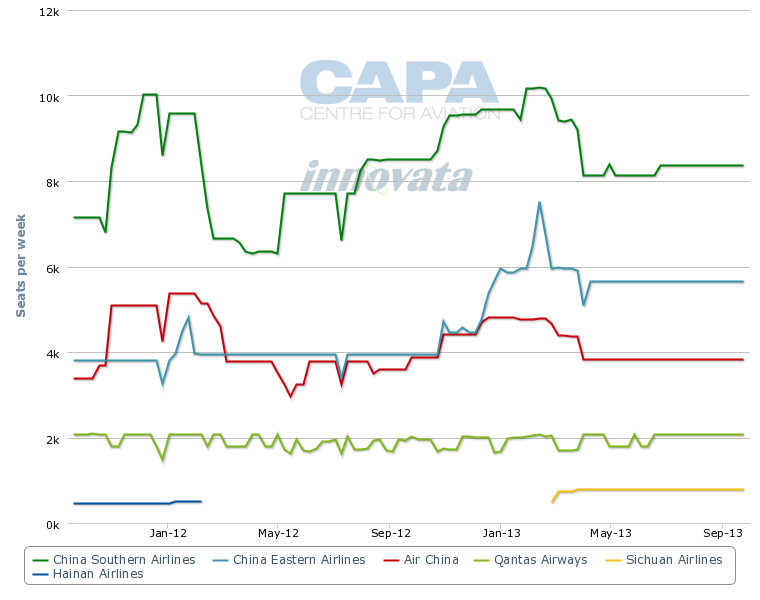 The capacity cap applies to services to Australia’s main centres of Sydney, Melbourne, Brisbane and Perth. Up to another 2,500 seats per week are available for services operated to one of the main Australian centres that make a stop at regional airport such as Cairns, Broome or Darwin. The additional capacity is aimed at encouraging more international services to secondary gateways and grow regional tourism.

Furthermore the 2011 MoU with China includes a shared commitment to negotiate an “open skies” agreement which would remove most, if not all, limitations on airlines operating between and beyond the two countries. Australia is an increasingly feed market for Chinese hub airports seeking to compete with other Asian hubs as well as the Gulf states.

The number of Chinese arrivals in calendar 2012 reached 626,000 while 381,000 Australians travelled to China, according to the Australian Bureau of Statistics.

The Chinese carriers typically serve Australia from their respective home bases. Sydney is the biggest route for all but Sichuan Airlines, which only operates to Melbourne from Chengdu.

China Southern reportedly plans to upgauge its Guangzhou-Sydney service from an A330-200 to an A380 in 2H2013. China Southern launched the “Canton route” between Australia and London via Guangzhou to compete with the Qantas-Emirates alliance which operates to London over Dubai.

One of China Southern's senior executives, Chen Gang, is expected to announce the A380 service in Sydney at the end of Apr-2013, with a start date yet to be decided, according to the Sydney Morning Herald.

Sichuan Airlines launched a three times weekly service from Chengdu to Melbourne on 28-Feb-2013. The service is Sichuan Airlines’ only Australian route, and provides the first central China connection to Australia. Melbourne has a “sister airport” relationship with Chengdu Shuangliu International Airport.

Chengdu is a city of 13 million people and with a surrounding population of more than 50 million. Sichuan Airlines joins China Southern, China Eastern and Air China as the fourth airline from China to operate to Melbourne Airport.

By comparison, Qantas is the only Australian carrier to operate non-stop flights between Australia and China.

Qantas operates just a fraction of the reciprocal capacity available offering about 2,100 seats per week with a daily service between Sydney and Shanghai using an A330-300. Qantas subsidiary Jetstar Airways currently serves Beijing with four weekly A330-200 flights from Singapore that originate in Melbourne.

Emirates expansion is rapidly absorbing bilateral capacity to and from Australia

Rapid expansion by Emirates on routes to Australia, both direct and via Southeast Asia, is quickly absorbing bilateral capacity which allows for up to 126 frequencies each way. At this stage not all of the available frequencies are being used, but Emirates has scheduled further capacity increases looking out to Jul-2013. 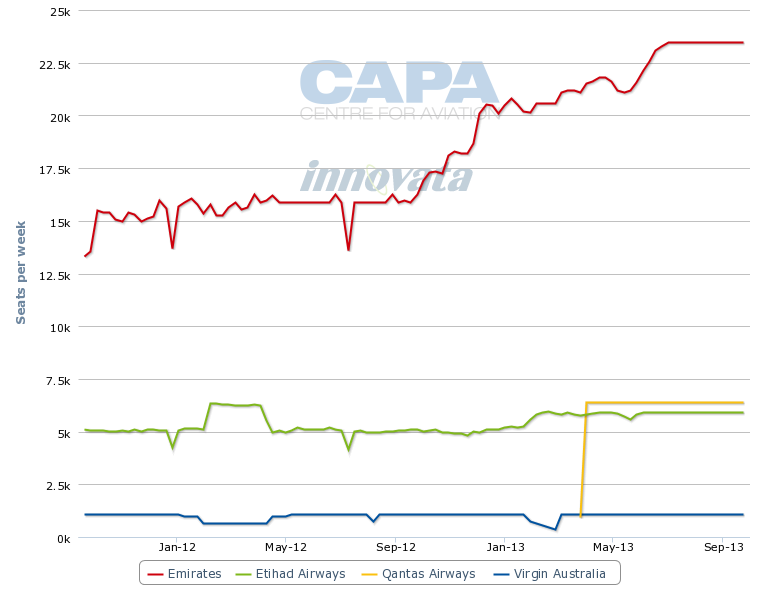 Qantas operates daily from Sydney and Melbourne to Dubai and on to London as part of its alliance with Emirates while Virgin Australia flies three times per week to Abu Dhabi in partnership with Etihad. That leaves 109 frequencies available as at Apr-2013.

Qantas operates double daily A380 services to Dubai from London along with daily services from Sydney and Melbourne as part of its alliance with Emirates. All four of its daily Dubai flights began on 31-Mar-2013, when Qantas moved the transit stop of its Sydney and Melbourne to London flights from Singapore to Dubai.

Emirates operates to Dubai from Perth three times daily, Sydney twice daily and daily to Melbourne and Brisbane. A daily Adelaide service does not form part of the capacity restrictions, which only apply to Australia’s main centres.

Etihad operates about 5,900 seats to Australia, including 11 weekly services between Abu Dhabi and Sydney and daily to Melbourne as part of its alliance with Virgin Australia.

Both the UAE carriers also use capacity rights by operating daily frequencies to Australia via Southeast Asian hubs.

In total Emirates and Etihad in Apr-2013 operate 102 of the 126 available one-way frequencies per week available under the bilateral agreement to Australia’s four biggest cities. It is not known how much, if any, of the spare capacity has not been assigned to one of the UAE airlines.

Picking up just over half of those increases would allow Emirates to achieve its stated target of 100 frequencies to Australia with its own metal. But for now the carrier appears comfortable with its schedule of 84 flights per week to five destinations which Emirates president Tim Clark described to The Australian “as probably optimal at this point in time”.

In addition, the available capacity on the route for Australian carriers offers plenty of scope for expansion under the alliance. This includes the possibility of Qantas operating some European routes not currently serviced by Emirates such as Berlin, if it converts some of its 50 options for Boeing 787-9 into firm orders for delivery in 2016.

Cathay Pacific has already exhausted the 70 weekly frequencies available each way between Hong Kong and Australia and the carrier is hopeful that stalled negotiations to extend the bilateral agreement will lead to an increase in traffic rights. 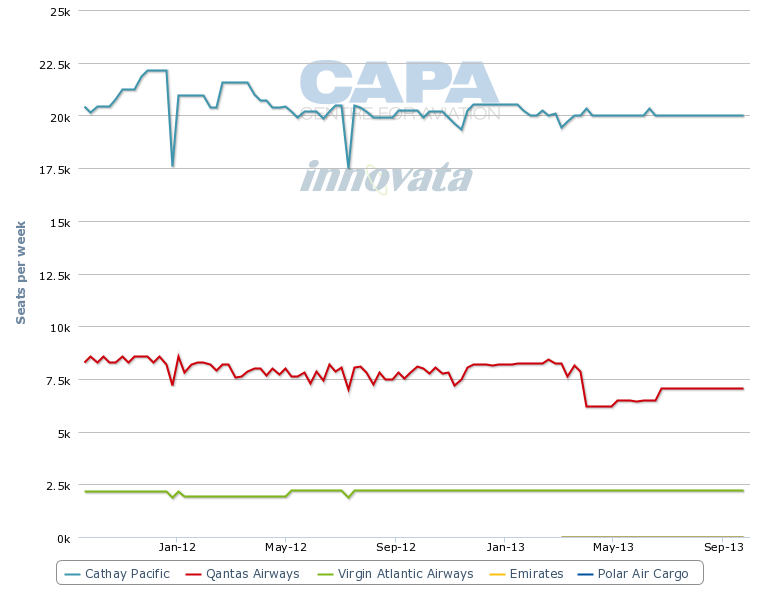 The delay also forced rival Hong Kong Airlines to put on hold its planned Sydney and Melbourne services in 2012. Bilateral talks were understood to have ended after Hong Kong objected to Australia’s request on behalf of Qantas for greater fifth freedom access to onward points, predominantly in North Asia.

Those pressures will not have eased given Qantas’ need to strengthen its access to North Asia as part of its renewed focus on the region now that its alliance with Emirates for mainly European services has commenced.

Qantas is operating just 18 of the 25 frequencies it has been granted under the bilateral after ceasing Perth-Hong Kong from 31-Mar-2013 and reducing Sydney frequencies from 11 per week to seven. This was partly offset by an additional frequency on Brisbane-Hong Kong taking that route to five flights per week.

Cathay focused on Sydney while boosting Melbourne services via Adelaide

Cathay has a strong focus on Sydney, operating four times daily on the route with A330-300 aircraft.

The carrier also flies double daily direct to Melbourne. Cathay adds a third daily frequency to the city by operating via Adelaide to take advantage of the bilateral capacity exemption available for flights that include a stop in a secondary port. The Adelaide stop makes the route less appealing for Melbourne-bound traffic but provides an additional direct daily service from Melbourne to Hong Kong that would not otherwise be possible.

Seasonal schedule adjustments mean Cathay does not use its full bilateral entitlements all year round. It currently operates just 56 direct frequencies to the main centres, leaving a double daily frequency on the table. Cathay does not appear to have come close to using its full allotment in the last year.

Australia must ensure it keeps pace with demand for travel from key markets, especially from China which is expected to double in size by 2020, making an open skies agreement imperative. In the meantime Australian carriers are likely to increase the use of their bilateral rights as Qantas and Virgin Australia develop partnerships with Chinese carriers and gain greater access beyond the gateways.

In a second part to be published later this week the Australia-Southeast Asia market will be analysed. The Australia-Philippines and Australia-Malaysia markets are currently at capacity, constraining growth opportunities.