The Australia-India market has experienced rapid growth over the last three years, prompting Australia to lobby for more direct services. Visitor arrivals from India are up 50% since mid-2013, and total passenger traffic between the two countries is up approximately 30%.

Air India launched services to Melbourne and Sydney in 2013 but the Australia-India market is still dominated by Southeast Asian flag carriers. Singapore Airlines has been able to maintain a leading 41% share of the market. Malaysia Airlines also still carries more Australia-India passengers than Air India.

Attracting more nonstop flights from Air India, or the possible launch of nonstop flights to India by Australian carriers, will not be easy despite growing demand. Southeast Asia’s network airlines have a competitive advantage as they serve several gateways in both Australia and India. Southeast Asia’s growing medium/long haul LCCs have also started to compete in the Australia-India market and are well positioned to take a large share of the anticipated growth.

Visitor numbers from India have grown over 50% since FY2013, when Australia reported approximately 160,000 Indian resident visitors. India is now the ninth largest source market for Australia’s tourism sector– slightly ahead of Hong Kong and slightly behind South Korea. 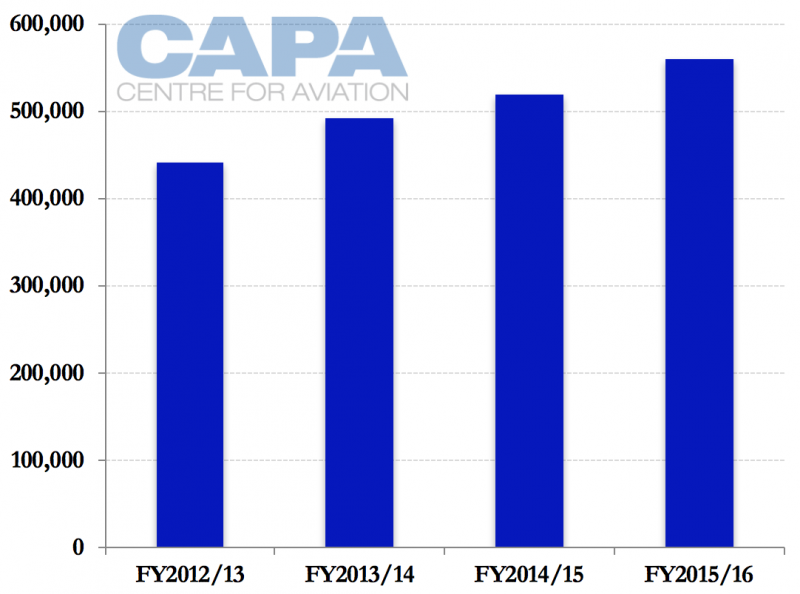 Note: based on one-way passengers from Australia to India
Source: CAPA – Centre for Aviation and OAG Traffic Analyser 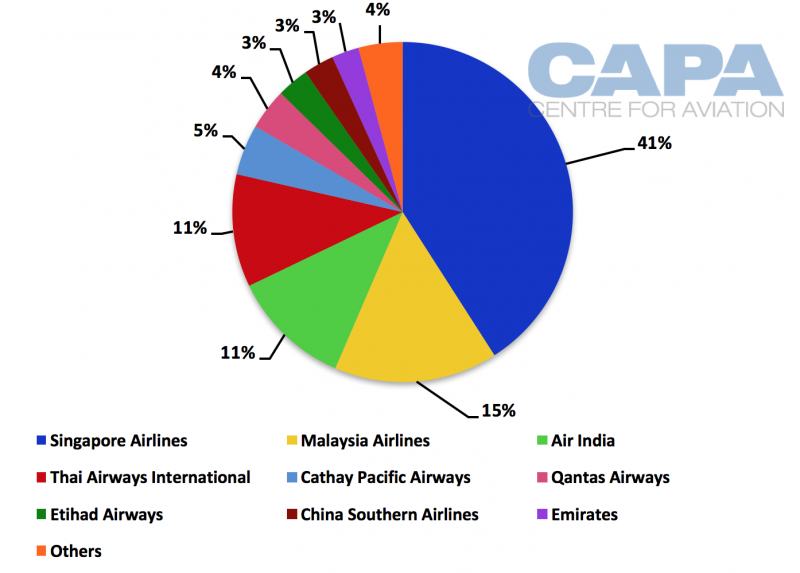 Note: based on one-way passengers from Australia to India
Source: CAPA – Centre for Aviation and OAG Traffic Analyser

SIA has benefitted from the overall growth in the Australia-India market and has not lost market share as a result of Air India's entrance. SIA Australia-India bookings increased 28% from FY2013 to FY2016, enabling the airline to maintain a 41% share of the market as the total market grew by a similar amount.

Guangzhou and Hong Kong offer slightly more circuitous routes compared with Southeast Asian hubs but are much more convenient than the Gulf hubs. Cathay Pacific, and particularly China Southern, have a smaller presence in India compared with their Southeast Asian rivals – which explains their much smaller share of the Australia-India market.

In FY2016 approximately 45% of Australia-India traffic transited in Singapore. This includes the 41% share from SIA and Qantas’ 4% share – Qantas routes most of its India passengers via Singapore, where it connects with its codeshare partner Jet Airways. Qantas and Jet are now seeking approval to also codeshare via Bangkok but Singapore will remain the main intermediary hub for Qantas offline services to India as Qantas serves four Australian cities from Singapore while it only serves Sydney from Bangkok.

Scoot will likely account for a large chunk of the anticipated growth, rather than take away market share from its parent, which continues to rely on India connections for its large (and still growing) Australia operation.

Scoot has been serving Australia since its 2012 launch but did not have its own flights to India until May-2016, and initially did not have any connecting product with its sister airlines SIA or Tigerair. Even when a connection product with SIA and Tigerair was launched, the product attracted very few passengers due to marketing and IT issues. In FY2016 Scoot accounted for only 1% of total Australia-India bookings.

As CAPA has previously observed – Scoot is banking heavily on Australia connections for its new services to Amritsar, Chennai and Jaipur. Chennai-Australia is particularly a target market for Scoot as Chennai is a much larger market from Australia than Amritsar and Jaipur. Chennai also has more frequencies – from Scoot and sister SIA Group airlines – making it easier for Scoot to offer Chennai-Australia connections.

AirAsia and Malindo to drive Australia-India growth for Kuala Lumpur

AirAsia X resumed services to Delhi in Feb-2016 and is now heavily promoting connections between Australia and Delhi. AirAsia X previously served Delhi and Mumbai, but dropped both routes in early 2012, and at the time did not promote a connecting product. Nearly half of all AirAsia X passengers now connect in Kuala Lumpur to other AirAsia X or AirAsia flights.

For several years the AirAsia Group has offered connections from Australia to southern and eastern India, where its short haul subsidiary Malaysia AirAsia currently serves seven destinations. But these are all much smaller markets from Australia than Mumbai and Delhi – and in some cases are miniscule.

AirAsia now has the only LCC product from Australia to Delhi, the largest market in India from Australia. AirAsia X is keen to resume Mumbai but currently there are no available traffic rights to Mumbai for Malaysian carriers.

Lion Group’s Malaysian JV, Malindo Air, is also now offering a new competitively priced option from Perth to Australia. Malindo launched services to Perth in late 2015 and serves six cities in India, including Delhi and Mumbai. Malindo will likely expand its Australian network over the next few years with a heavy reliance on connections to India.

Malindo is a full service airline yet sometimes offers fares only slightly higher than LCCs. Malindo’s fares from Perth to Delhi for travel in Oct-2016 now start at approximately USD600 return, including taxes.

Scoot currently does not sell tickets from Australia to Delhi or Mumbai. For the time being Scoot only offers flights from Australia to eight smaller Indian cities served by Tigerair or Scoot. As Scoot’s interline with SIA and SilkAir is expanded to include more markets, more Australia-India connections are likely.

SIA has the advantage of offering the largest network in both Australia and India.

Malaysia Airlines reduced its Australian presence significantly in Aug-2015, with a 40% capacity cut and suspension of Brisbane services. However, Malaysia Airlines still has twice daily flights to Melbourne and Sydney – the main markets for India.

The restructured flag carrier’s new business plan heavily relies on regional connections within Asia Pacific from Australia, including India, to offset significant reductions on the Kangaroo route from Australia to Europe. Malaysia Airlines has dropped all of its European destinations except London.

Thai Airways also offers twice daily flights to Melbourne and 11 weekly flights to Sydney. It has four destinations in Australia which happen to be the four largest markets for Australia-India traffic.

Thai Airways recently adopted a new strategy focusing more on regional connections within Asia Pacific. The group plans to expand in India, with potential new routes to secondary cities to be operated by its full service regional subsidiary Thai Smile. Australia-India traffic will be a target as Thai Airways expands in India.

Australia-India traffic is spread out across several Indian cities

Tourism Australia and other government agencies in Australia are now lobbying for more direct flights to Australia. However, intense competition from Southeast Asian airlines – both full service and low cost – will make it hard for any airline to justify new nonstop flights in the Australia-India market.

The biggest Indian gateway for Australia-India traffic is Delhi, the base that Air India uses for its nonstop services to Melbourne and Sydney. However Delhi only accounts for just under 40% of all Australia-India bookings, according to OAG Route Analyser data for the year ending 30-Jun-2016.

Mumbai accounts for approximately 15% while nearly half the market is spread out across several smaller Indian cities. Australia is unlikely to attract nonstop services from any of these other Indian cities. But collectively they account for a large volume of passengers. 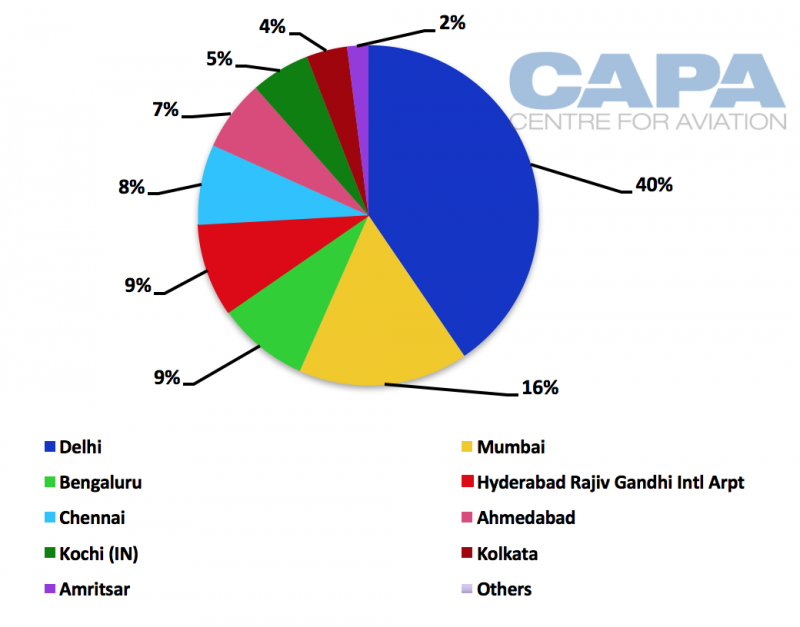 A relatively large share of Australia-India traffic is also heading to cities other than Melbourne and Sydney. But again it is unlikely that any of these Australian cities can attract nonstop services from India. 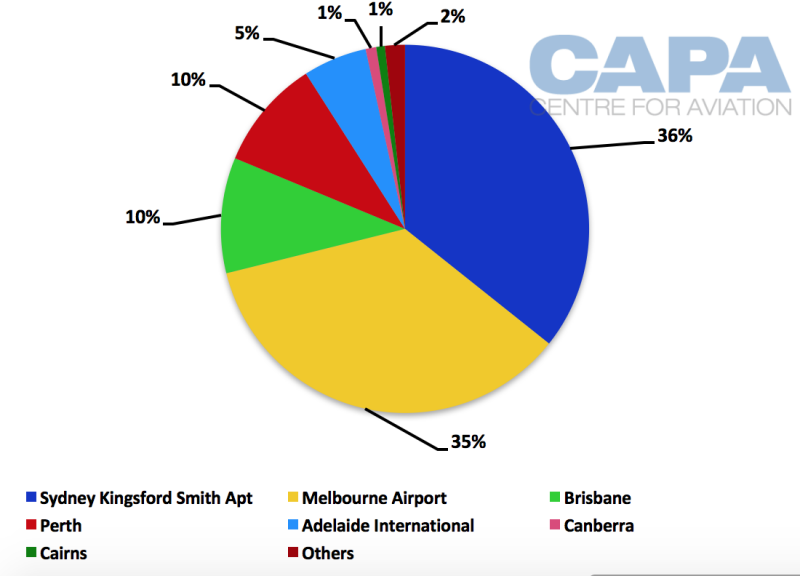 More Air India capacity to Australia is justified but unlikely

More capacity from Air India is probably the most feasible scenario. Air India has performed fairly well in Australia, particularly since it ended the initial triangle routing and began operating separate nonstop flights to Melbourne and Sydney in May-2015.

Jetstar or Qantas could struggle to justify India services

Services to India from Jetstar or Qantas seem relatively unlikely. Qantas, which served Mumbai via Singapore until 2012, could potentially move the stopover of one of its London flights from Dubai to Delhi or Mumbai (used previously as an intermediate point by Qantas). Qantas is now assessing new options for stopping one of its two daily London flights, but selecting an East Asian airport is more likely.

Jetstar is expected to free up some of its 787-8s over the next couple of years as A320neos replace 787-8s on Australia-Bali routes. Jetstar is assessing several options for these aircraft and India may be in the running. However, there are several other potential routes for Jetstar’s limited 787 fleet – particularly China.

The reality is that it will be difficult for any Australian or Indian airline to compete against Southeast Asian airlines.

The Australia-India market will continue to grow, but Southeast Asian airlines are much better placed to capture this growth.