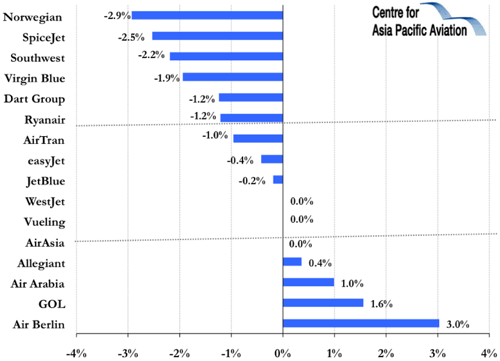 Ryanair to open 37th base at Oslo Rygge

In Europe, Ryanair (shares -1.2%) announced plans to open its 37th base at Oslo Rygge in Mar-2010 with three based aircraft and 16 new routes (22 in total) being launched. Ryanair will offer 100 weekly services to/from Oslo Rygge in an investment of over USD200 million in the airport, with the carrier expecting to increase its traffic at Oslo Rygge to 1.7 million passengers p/a.

Also in Europe, Air Berlin’s shares gained 3.0% yesterday. The day prior, Germany’s second largest airline announced plans to recruit 700 flight attendants and 120 pilots. It is expected that they will be based at Berlin, Düsseldorf, Frankfurt, Hamburg, Munich, Münster/Osnabrück, Nuremberg, Paderborn-Lippstadt and Stuttgart in Germany, as well as Basel/Mühlhausen and Zurich in Switzerland.

Norwegian’s shares fell 2.9% on Tuesday with easyJet’s shares down 0.4%.

In the America’s GOL’s shares added 1.6% yesterday, outperforming the 0.8% increase in the benchmark Ibovespa stock index, while Southwest Airlines’ shares slipped 2.2%, reflecting a general trend for US airlines.