Air Canada’s low-cost subsidiary rouge for the moment does not seem to be creating huge pressure for Air Transat, which operates on many of the same routes as rouge, targeting the same segment of leisure passengers.

Air Transat appears to be making moves to keep the overall supply-demand equilibrium in check in the busy summer season trans-Atlantic markets by keeping its supply growth relatively flat year-on-year, while Air Canada capacity increases. Even with Air Transat keeping a tight lid on supply, the company does project an overall 10% rise in supply from Canada to Europe during the summer season. However, pricing seems to be holding steady in those markets, perhaps indicating that rouge and Air Transat for now can co-exist.

As it kept capacity in check on trans-Atlantic services, Air Transat opted to grow its supply by 9% year-on-year to sun destinations during the summer season period. But the company believes pricing in those markets is holding steady even though some of the routes are amply served by other Canadian airlines.

rouge is approaching its one year anniversary in Jul-2014. Unsurprisingly, during the past year Air Canada has touted rouge’s positive contribution to the company. For the first time in May-2014 Air Canada reported rouge’s load factors separately from mainline, and the lower cost carrier’s loads for the month were a solid 85%.

Air Transat is undertaking a fleet revamp on sun routes that entails the operation of fewer widebodies in winter 2014/2015 in favour of more narrowbodies, which the carrier feels will both lower cost and improve yields. As of 30-Apr-2014 Air Transat’s fleet comprised nine 250-seat Airbus A310s, 12 345-seat A330s and a single 189-seat Boeing 737-800s. In total Air Transat is adding three additional -800s during the summer of 2014. 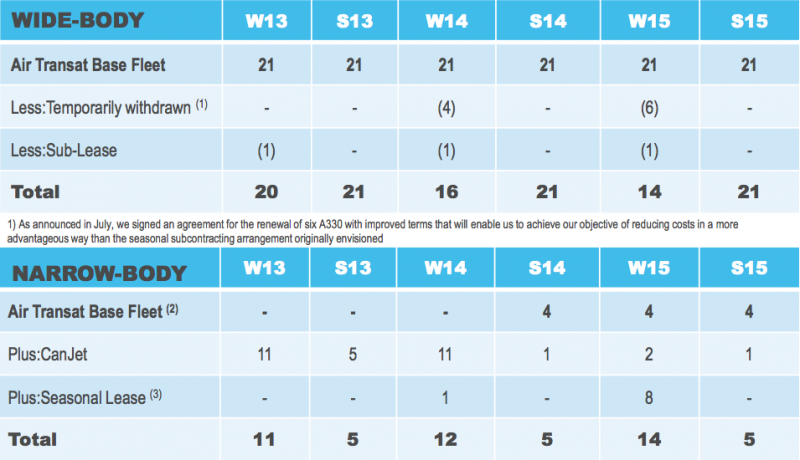 As Air Canada outlined rouge’s network, largely mainline markets that would transition to the airline’s new low-cost subsidiary, the obvious question was how the lower cost operator would pressure Air Transat and its parent company travel tour operator Transat.

It appears that Air Transat’s trans-Atlantic capacity will be flat to down 1% versus estimates of a 2% increase in Dec-2013. At that time Transat executives remarked that the company had not seen aggressive pricing actions from rouge in the trans-Atlantic market for summer season, but it was too early to tell if that trend would remain intact.

Transat projects a 10% increase in capacity from Canada to Europe in summer 2014, with Air Canada’s supply growing 17%. As of 12-Jun-2014 Transat estimated that 65% of its inventory in those markets was sold at prices 4.3% higher than the year prior. Its load factors had fallen by roughly 2% year-on-year and costs increased 4% as the company battled the effects of the CAD against the USD. The company estimates that 30% of its consolidated expenses during the summer time period are denominated in the USD, and 55% of its costs on a flight to Europe are denominated in foreign currencies, either the USD, EUR or GBP. 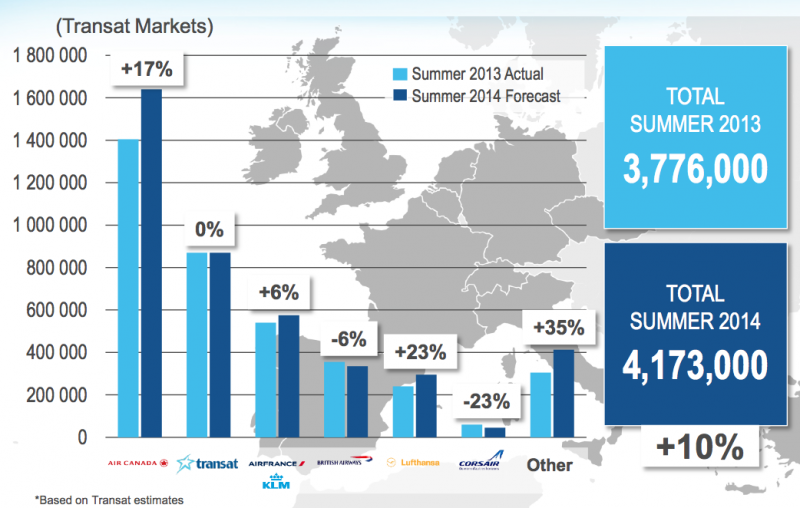 Schedules in CAPA and OAG show that Air Transat is not necessarily shying away from competition with rouge. The two airlines are competing on all of rouge’s trans-Atlantic routes from Toronto and Montreal with the exception of Toronto-Edinburgh. For the week of 29-Jun-2014 to 5-Jul-2014, Air Transat has a higher share (measured by seats deployed) in four of those markets – Toronto-Manchester, Toronto-Lisbon, Montreal-Barcelona and Montreal-Athens. Transat estimates that roughly 62% of its seat sales for the summer season originate in Canada and the remaining 38% are European point-of-sale.

Given the commentary provided by Transat, it seems as if rouge is not attempting to insert junk fares into the trans-Atlantic market place, which seems logical given that Air Canada needs to ensure rouge delivers on its revenue projections in addition to the estimated 21% unit cost reduction on rouge’s A319s and the 29% decrease on the rouge 767s compared with Air Canada mainline jets of the same type.

Air Transat makes a push into sun destinations for summer 2014

At the same time Air Transat is keeping capacity essentially flat in its trans-Atlantic markets during the summer season, the airline is increasing its capacity in sun destinations by 9% in the summer season. At the end of Apr-2014 Transat noted that selling prices in those markets were up year-on-year even as loads were trending down.

Based on schedules in CAPA and OAG for the week of 29-Jun-2014 to 1-Jul-2014, Air Transat is competing with rouge on several routes to the Caribbean from Toronto and Montreal. There are also several routes where it seems Air Transat did not have a presence a year ago (based on schedules in CAPA and OAG) including Toronto-Cayo Coco, Holguin and Varadero and Puerto Plata and Montreal Cayo Coco and Port-Au-Prince.

The schedules show that Air Transat competes with rouge on all six of the low-cost carrier’s Caribbean routes from Montreal and about seven from Toronto.

Transat’s commentary about pricing traction in both the trans-Atlantic and sun markets in summer 2014 is encouraging, as it seems that rouge is not presently creating overwhelming pressure for Air Transat.

The company is also adding some service where it faces no competition. This incudes the recent launch of flights from Toronto to Prague, which can provide a little relief to some of the capacity additions introduced by both mainline Air Canada and rouge. 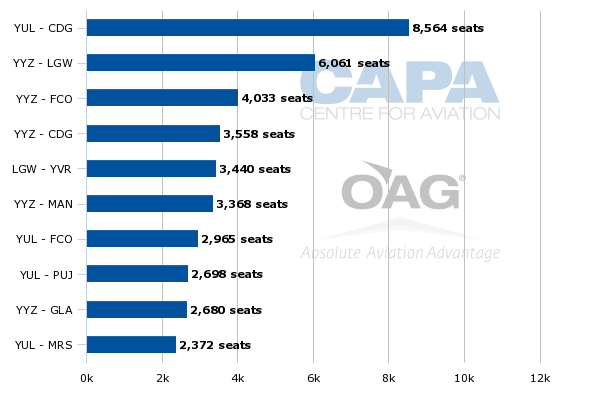 Transat’s more persistent challenges seem however to be related to currency fluctuations rather than a huge threat from rouge. During 2H2014 the company states it expects to record satisfying results, albeit not as favourable as in the year-ago period.

As the glimpse of Transat’s performance during the summer high season indicates, the still-favourable pricing traction it is enjoying is being outstripped by rising costs stemming from the CAD depreciation, even with surcharges introduced on its vacation packages to sun destinations.

Transat's fortunes seemed to be turning at the start of its FY2014; but the losses for the first half are not very encouraging. With the continued stubborn depreciation of the CAD, Transat faces a diminished financial performance in what should be its strongest season of the year.