If Air France-KLM were to enter this segment it would be the second of Europe's big three legacy airline groups to do so, after the Lufthansa Group. Ironically, there is no long haul low cost competition to Lufthansa in Germany. By contrast, IAG faces more such competitors in the UK than either of its two major rival groups in their largest home market, but currently has no plan for such an operator.

Air France-KLM management told analysts on a conference call in May-2016 that it was sceptical about the sustainability of year-round profits for long haul low cost. However, new competition has prompted Mr Janaillac to look more closely at this market segment. Since Jul-2016 Norwegian has commenced trans-Atlantic long haul operations from Paris CDG. In addition, since Sep-2016, the new-start long haul LCC French Blue now flies on routes to the Caribbean. Mr Janaillac is expected to report on his strategic vision for Air France-KLM in early Nov-2016. Labour relations will be crucial to the group's development – not least in the area of long haul low cost.

According to data from OAG and CAPA, there are currently (week of 17-Oct-2016) only five long haul destinations served by Air France from Paris CDG that have a low cost airline competitor (either from Paris CDG or from Paris Orly). Three are in the Caribbean and two are in the US.

The five long haul routes from Paris on which Air France has low cost competition are Punta Cana, Port-au-Prince, Santo Domingo (Dominican Republic), New York and Los Angeles. The low cost competitor on the first three of these is French Blue, operating from Orly, while Norwegian competes from CDG on the two US routes.

Norwegian also operates from CDG to Fort Lauderdale-Hollywood Airport, which is only 30 miles or 50 km from Miami International, which is Air France's only destination in Florida.

UK has 16 long haul low cost routes; Germany only has those operated by Eurowings

To give some comparison between the situation in France and in other large European countries, OAG data for the week of 17-Oct-2016 show 16 long haul routes to/from the UK that are operated by a low cost airline (all are to/from North America). The only long haul low cost routes to/from Germany at present are those operated by Lufthansa's Eurowings.

There are 11 long haul low cost routes to/from the Netherlands, operated by TUI Airlines Netherlands. However, most of these routes have been served by TUI for several years. Moreover, KLM is a lower unit cost operator than its sister airline Air France, and the Air France-KLM group's priority for low cost long haul would be the French market.

Norwegian has been growing its long haul network for some time and is therefore something of a known quantity. Moreover, it has entered long haul routes that have a strong business demand and so, would probably not be a priority for Air France to consider a low cost response against.

By contrast, French Blue is a new-start and is focusing on leisure destinations. According to the CAPA Fleet Database, French Blue currently operates one new Airbus A330-300E, leased from its parent Groupe Dubreuil. It has a 378-seat configuration for the aircraft, with 28 premium economy and 350 economy seats.

French Blue planned to increase its Paris Orly-Punta Cana frequency from weekly to four times weekly due to strong demand (arecoa.com, 12-Sep-2016), although OAG data indicate that its frequency is currently three times weekly. The carrier estimates that traffic on the sector stands at 230,000 passengers annually. 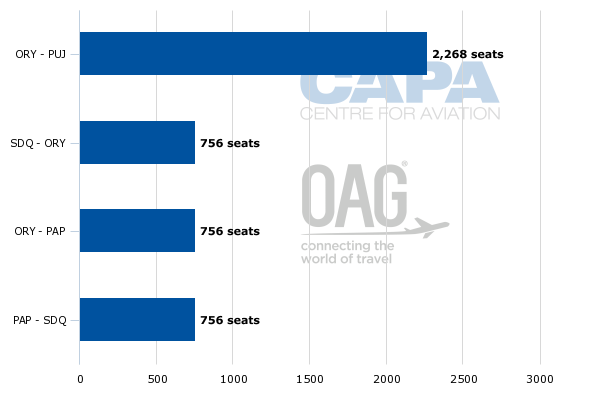 French Blue plans to launch an eight times weekly Paris Orly service to La Réunion in the Indian Ocean. French Blue will launch its first A350 equipment on this route.

This route is currently also operated from Orly by Corsair and Air France, and from Paris CDG by Air Austral. Dubreuil Group chairman Jean-Paul Dubreuil reportedly said the company wants to practice "an aggressive pricing policy" (Ouest France/lefigaro.fr, 05-Oct-2016). 'Smart' fares are priced from EUR299, and Premium fares at EUR649.

French Blue has a sister airline, Air Caraïbes, based in French Caribbean

French Blue's owner Groupe Dubreuil also owns Air Caraïbes, which is based in the French overseas territory of Guadeloupe, with a main base at Pointe-à-Pitre. It operates regional routes within the Caribbean and a number of long haul routes to Paris Orly.

Air Caraïbes' website says that it has entered codeshare agreements with French Blue, as well as with Corsair and Cubana de Aviación. Some media reports have quoted French Blue saying that 80% of its Paris-Punta Cana seats are filled by codeshare with Air Caraibes ticket sales.

Air France-KLM Group CEO Jean-Marc Janaillac has said that the group is considering a range of options in the low cost, long haul segment.

The president of Paris CDG-based XL Airways, Laurent Magnin, has attempted to influence Air France-KLM's thinking. The airline operates three Airbus A330s and one Boeing 737-800 to mainly leisure destinations in Europe, Africa, Latin America and the US.

It operates from Paris to two of the destinations where there is long haul low cost competition for Air France – namely Punta Cana and New York.

Mr Magnin has reportedly said that XL Airways would be open to investment from Air France. This could allow it to operate as a low cost long haul niche carrier, potentially acting as Air France's competitive response to start-up French Blue.

Mr Magnin said, "I have no debate to open the capital to Air France and to do things with Air France… In my opinion, Air France is an indispensable tool in France" (AFP, 15-Oct-2016).

More than three quarters (76%) of XL Airways' seat capacity is on long haul leisure routes. Its remaining capacity is on four European routes, where the overlap with Air France-KLM's LCC Transavia is limited only to Paris-Heraklion (operated by XL from CDG and Transavia from Orly). 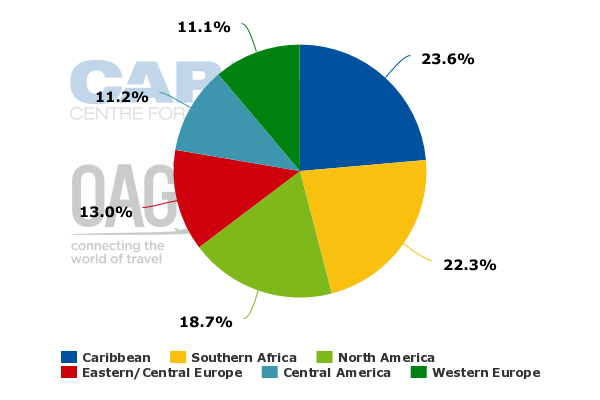 It seems that Air France-KLM is not the only airline to be considering establishing a long haul low cost operator from France. Corsair CEO Pascal De Izaguirre has said that his airline is to conduct a feasibility study on the potential launch of such an operation (PNC Contact, 22-Sep-2016). He said, "For its duration, Corsair will not be able to withstand competitors with such advantage in terms of costs".

Referring to French Blue's plans to launch Paris-La Réunion services, Mr Izaguirre warned of "huge overcapacity on this route" and a sharp decline in prices, "since it's obvious that we would align our prices with those of French Blue".

Part of the TUI Group, Corsair is already cooperating with French Blue's sister airline Air Caraïbes through a codeshare agreement. If it also sets up a low cost operation this will increase the intensity of competition felt by Air France on some of its long haul leisure routes.

Air France KLM's Mr Janaillac, who is only a few months into his tenure as CEO, is set to announce details of his initiative to revitalise the group's restructuring programme in early Nov-2016.

Within weeks of his arrival on 4-Jul-2016 he told analysts on the group's 2Q2016 results webcast that his first task was a strategic review. This would involving working with all stakeholders and it would take a few months to "create a vision", although he did not envisage a fundamental change of strategy. He would be seeking "synergies between growth and productivity".

It is expected that the initiative will bring greater clarity to the relative position and role of each of the group's airline brands, including the possible development of Transavia activity for long haul.

Transavia's growth remains constrained by an agreement with Air France pilots. Mr Janaillac's focus on industrial relations will be very important to the development of long haul low cost operations by the Air France-KLM group.

Among Europe's big three legacy airline groups, the only one that has developed a long haul low cost operation is the Lufthansa Group. Its Eurowings low cost brand has a number of long haul routes to destinations in North America, Latin America and Asia Pacific.

As noted above, however, Lufthansa has no low cost competitors on long haul routes to/from Germany. It does not need them in order to understand that its mainline long haul operation is not sufficiently cost-effective versus many of its competitors, and that it needs alternative production platforms.

IAG does not have long haul low cost, in spite of greater competition

In spite of this long haul low cost competition, IAG currently has no plans for a long haul LCC operation. Willie Walsh, IAG CEO, has referred to Aer Lingus as IAG's 'low cost long haul' platform, although this is stretching the definition. It is certainly a cost-efficient long haul operation by comparison with Europe's larger legacy airlines, but not low cost in an absolute sense.

Nevertheless, IAG has a unit advantage over Lufthansa Group and Air France-KLM. This is partly based on IAG's earlier success with implementing improved labour productivity, aided by the creation of Iberia Express and Vueling. These two are not long haul operators, but IAG has achieved much cultural change through the lever of having alternative platforms.

If Air France-KLM announces concrete plans for long haul low cost, this should be welcomed

The Air France-KLM group suffers from poor labour productivity, particularly at Air France. Prior to Mr Janaillac's arrival in Jul-2016 management was imposing long haul capacity cuts at the French flag carrier, dangling the carrot of restored growth only if pilots agreed to its proposed productivity improvements.

Certain productivity measures were imposed, but Mr Janaillac agreed to suspend them until 1-Nov-2016 in return for pilots' agreeing to drop the threat of strike.

If Mr Janaillac does announce concrete plans for a long haul low cost operation for Air France-KLM, it will be a positive signal on three counts.

Firstly, it will demonstrate progress in labour relations, as it will need pilot agreement to launch a long haul low cost business. Secondly, it will provide the group with the potential to compete more effectively on long haul point-to-point leisure routes. Thirdly, it will give Air France-KLM management further leverage in future labour negotiations to have different growth options for its long haul production.

Long haul low cost would only be part of Mr Janaillac's vision, but achieving it would promise much about the Air France-KLM group's ability to create a future of trusting together.