Air CEMAC, a proposed start-up joint venture between six central African nations and Air France is inching its way to fruition. But tense negotiations between the Economic and Monetary Community of Central Africa (CEMAC) member states of Cameroon, Chad, Central African Republic, Equatorial Guinea and Republic of the Congo, and their prospective strategic partner Air France are at a delicate stage as the latest deadline to launch the carrier by the end of 2013 looms.

A key sticking point appears to be Air France insisting on taking a strategic 33% blocking stake in the joint venture while also demanding that Air CEMAC be granted a monopoly on future CEMAC regional routes, a proposition that could be severely damaging to the region’s existing carriers.

Air CEMAC aims to provide regional services linking the CEMAC states as well as the island nation of São Tomé & Príncipe to the rest of Africa. The plan has been 10 years in the making and Air France is almost certainly the final chance for the union to turn their wish for a common carrier into a reality as the original start-up capital is reportedly almost exhausted. Three potential strategic partners, Brussels Airlines, Royal Air Maroc and most latterly South African Airlines have all previously looked and walked away.

Air CEMAC was founded in 2000 to replace Air Afrique

Air CEMAC was founded as a paper airline in 2000 by the CEMAC monetary union to replace Air Afrique which was liquidated in 2002. Air Afrique was a similar joint venture between 11 mainly West and Central African nations and also had Air France as a cornerstone shareholder. Air France took over most of Air Afrique’s routes to protect its position in Francophone Africa.

The French national carrier was announced as a strategic partner for Air CEMAC in Jun-2012, replacing SAA which terminated is involvement in Feb-2012 due to “deep differences of opinion” after the Republic of the Congo objected to Air CEMAC’s headquarters being moved from Brazzaville to SAA’s preferred city of Douala.

The Republic of the Congo holds considerable sway having provided the original USD20 million in start-up capital for the carrier. But unless a deal can be struck with Air France soon, Air CEMAC faces a liquidity crisis as most of its original capital has been spent. The company’s costs have increased with the appointment of a board of directors and the opening of headquarters in Brazzaville in Mar-2013, but the operation has no source of income.

Under the joint venture, Air France will reportedly hold a 33% stake in Air CEMAC, the six CEMAC states will each own 5%, Bank of Central African States 15% and the balance by other investors.

Negotiations are set to resume in Aug-2013 and CEMAC officials are reportedly confident that an agreement can be finalised to allow Air CEMAC to commence services by the end-2013 deadline.

A key point of negotiation will be the impact that Air CEMAC will have on existing national carriers in the region, including Camair, Ceiba Intercontinental and ECAir (Equatorial Congo Airlines), all of which already face steep financial hurdles. 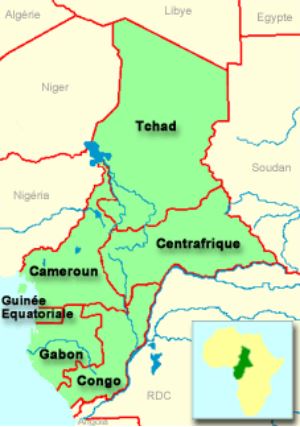 Cameroon’s national carrier Camair was launched in 2006 replacing Cameroon Airlines and operates regional services to 12 points including five domestic destinations, regional services to Côte d'Ivoire, Benin, Nigeria, Chad, Gabon, the Republic of the Congo and the Democratic Republic of the Congo. It also operates long-haul from Yaoundé to Paris CDG five times per week using a Boeing 767-300ER, competing with Air France which also flies daily from Paris CDG to Douala. This service carries on to Malabo in Equatorial Guinea.

However, Camair has suffered from low sales on its regional network and is reportedly seeking additional funding from the Cameroon Government to finance its operations for the next six months. The airline plans to expand its long-haul network by acquiring a Boeing 777 and a 787 by 2015. The 787 will reportedly replace the airline's 767-300ER, while the carrier plans to increase its total fleet from three aircraft, including two leased 737s, to 26 aircraft by 2018.

ECAir was established in Sep-2011 as the new flag carrier of the Republic of the Congo and operates three times weekly Brazzaville-Paris CDG with a 757-300 in competition with Air France. ECAir also flies domestic services between Brazzaville and Pointe-Noire competing with Trans Air Congo. All of ECAir’s aircraft are operated by Geneva-based PrivatAir and the carrier’s business plan does not expect it to turn profit until its third year of operation.

While ECAir is the national carrier, the republic’s aviation sector is dominated by privately owned Trans Air Congo which operates domestic and regional services using 737 aircraft including to Brazzaville, Pointe-Noire, Douala, Libreville and Cotonou. Trans Air Congo provides more than 14,000 of nearly 31,000 seats per week offered by all 11 carriers that serve the country from throughout Africa as well as Air France, according to Innovata.

The Republic of the Congo international schedule summary: as at 2-Aug-2013 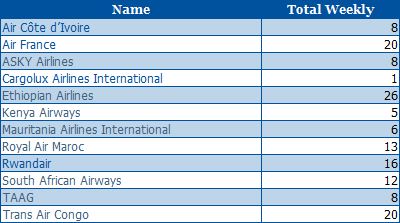 Equatorial Guinea’s flag carrier, CEIBA Intercontinental, operates domestic and regional services from its Malabo hub with ATR 42 and ATR 72 aircraft. The carrier also operates a single long-haul route to Madrid, owing to its historic Spanish links, with a Boeing 777-200LR which is on a long term wet lease from White. The carrier reportedly plans to add three Boeing 737s to its fleet by Apr-2014.

Chad, Equatorial Guinea and Gabon do not have national carriers. Gabon’s only airline, privately owned Gabon Airlines failed in 2010 after just three years variously operating from its Libreville hub to Marseille and Paris, as well as some domestic and regional routes. Plans by the Gabonese Government to establish a replacement airline Air Gabon International, which was to be a joint venture with Royal Air Maroc, have yet to materialise. 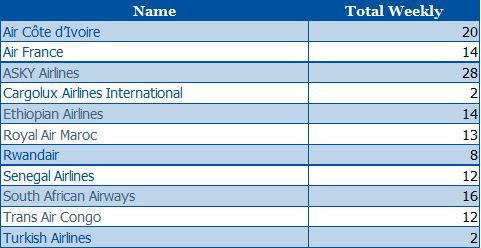 The CEMAC region is in dire need of more air services, in particular its two land-locked member countries the Central African Republic and Chad where passengers face lengthy circuitous routes to travel to other part of Africa, via East African hubs or in some cases having to transit via Paris.

Total seat capacity for the CEMAC region is a little over 100,000 of which about 64,000 are roughly split between Cameroon and the Republic of the Congo. Cameroon has 15 carriers competing for international traffic, including three European carriers, making it the region’s most competitive market. 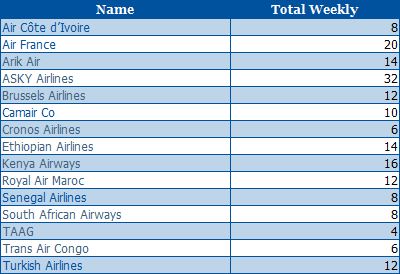 The land-locked nations of Chad and the Central African Republic are the poorest served by airline services and have the most to gain from Air CEMAC. Chad attracts just 5,500 seats per week from four airlines of which Ethiopian provides about half and Air France about 1,500.

Chad’s economy has been boosted by the development of its oil sector since 2000 and strong harvests. Considerable foreign direct investment has flowed into the country to develop its oil reserves which are estimated at 1.5 billion barrels in the south of the country. Two United States companies have invested USD3.4 billion in the industry while Chinese companies have built the first refinery and a 311km pipeline.

The Central African Republic’s aviation sector is almost non-existent with just 1,800 seats per week provided by four airlines, of which TAAG operates about half. Air France operates just 208 seats on a single weekly frequency to Bangui as an extension of its Paris CDG-N'Djamena service with an A330-200. The country has been wracked by civil instability and pockets of lawlessness persist particularly in the south of country. The republic does not have the benefit of oil reserves and its economy is largely dependent on agriculture which generates more than half of its GDP. Despite these challenges, GDP growth is estimated at 4.3% in 2013 by the IMF and is forecast to grow to as much as 6% in 2014.

Air France services all CEMAC nations except for Equatorial Guinea

Air France serves all the CEMAC states except for the tiny nation of Equatorial Guinea which is the only state that is not a former French colony. The carrier offers a total of 15,400 seats per week to the region and is the largest foreign airline in Cameroon, Gabon and Republic of Congo, which along with Chad and the Central African Republic were all granted independence from France in 1960.

The carrier’s biggest single market is Cameroon where it operates to three points, Douala, Yaoundé and Malabo with a combined capacity of about 5,500 seats per week. Gabon is served 14 times per week offering about 4,500 seats, while the Republic of the Congo has the highest number of frequencies, 20 per week, and about 3,700 seats.

The only other European carriers to operate to the CEMAC bloc are Brussels Airlines, which flies a combined 12 times weekly to Douala and Yaoundé, Iberia, which serves Equatorial Guinea 14 times per week, and Turkish Airlines with 12 weekly frequencies to Cameroon and two to Gabon, according to Innovata.

Cameroon and Gabon have both generally enjoyed stability with their economies based on oil production and primary commodities. However, both counties need to improve their business environment to attract foreign investment which, in the case of Cameroon in particular, is being deterred by endemic corruption. The Republic of the Congo is less politically stable but is one of Africa’s largest petroleum producers.

The launch of Air CEMAC has merit if its operation and governance is well supported by Air France, and its individual state owners continue to see eye to eye on their common airline’s long term development. This has in part been the undoing of similar bloc-based ventures in Africa in the past, including Air Afrique and East African Airways.

But Air France’s reported demands for Air CEMAC to be granted a monopoly on future regional routes cuts across free market principles. It simply reinforces the protectionism that has held back the development of aviation on the continent and must be vigorously pushed back when negotiations resume in Aug-2013.