Cameroon’s new national carrier Camair-Co has started its second year of operations with the launch of two new international routes from its hub at Douala in Jun-2012, taking its network to 12 destinations, an impressive build-up for just one year of flying.

Camair-Co will have a monopoly on the Douala-Kinshasa route, but will compete with Air Nigeria (formerly Virgin Nigeria Airways) on the Douala-Lagos route. Both routes will be served with Boeing 737-700 equipment seating 12 in business and 116 in economy.

The carrier operates a fleet of one owned 767-300ER and two leased 737-700s from US-based Aviation Capital Group.

Camair-Co was set up in 2006, although it was not until early 2011 that it managed to get into the air. The carrier is the successor to Cameroonian national carrier, Cameroon Airlines, which folded in 2008 after an unsuccessful privatisation process.

The Cameroon Government invested XOF22 billion (USD44.5 million) in the airline in 2010. Camair-Co has hired 155 staff that previously worked at Cameroon Airlines. Its total workforce was just under 400 at the end of 2011.

Early operations were not a complete success. In May-2011 Mr van Elk noted that Camair-Co’s first few months had not been profitable, with flights operating at load factors of just 30%. Technical issues with the carrier’s sole 767-300ER led to some flight delays and cancellations.

The carrier’s early destinations included Paris Charles De Gaulle, operating from Douala via Yaounde, the capital. The carrier also had domestic services to Garoua and Maroua. Services to N’djamena in Chad followed in Apr-2011.

Since its launch, the carrier has progressively expanded its operations in Western and Central Africa, adding routes to Bangui, Malabo, Cotonou, Brazzaville and Libreville. The airline uses its two leased 737-700s to serve regional African and domestic destinations while its 767-300ER serves Paris CDG.

The airline is reportedly looking at introducing a third aircraft type to its fleet mix, possibly regional jets or turboprops to complement its larger aircraft.

Earlier this year, the airline expended its operations to France, launching a Douala-Yaounde-Lyon service on 02-Feb-2012. France is an important destination for the carrier. The country is Cameroon’s single largest trading partner, having been a French colony between 1918 and 1960.

2011 objectives not met but pressing on with growth

Camair’s initial objective was to handle 400,000 passengers during 2011 and expand its network to 13 destinations, an objective that fell short. Current destinations including its hub number 10 (Kinshasa and Lagos will bring the number to 12) while traffic was well below expectations.  Although no full year data is available, the carrier flew 110,000 passengers over its first eight months of operations, with most traffic concentrated in the latter half as traffic accelerated following fleet expansion to three aircraft and increasing public confidence.

The carrier has signed a number of contracts with international partners to outsource non-core operations. The airline has signed agreements with Lufthansa Technick for MRO and Lufthansa Systems for IT solutions, with Lufthansa Consulting being involved in planning and management support for the carrier since its launch. The airline has also outsourced catering and onboard services to Servair and doual'air.

Camair-Co aims to be profitable by 2014, although it will require considerably greater size and scale before that is a realistic target. It faces only moderate competition in Cameroon, and the Eastern and Central African markets are underserved, providing plenty of space for growth. 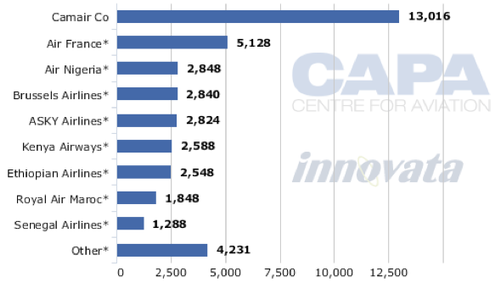 The carrier is looking to add more long-haul routes in the future, including services to Dubai and China, to capture the burgeoning business traffic. It is also looking for a strategic partner and investor, a move that would provide both financial backing and network support as it continues to grow.