Air Canada returned to profitability for the full year 2012 despite bruising labour unrest and intensifying competitive pressure from its main domestic rival WestJet.

To combat the increasing threat from WestJet, Air Canada is leveraging its international network in the hopes that strategic moves it is making to improve existing service and introduce new markets will allow it to sustain its recently-achieved fragile profitability.

While Air Canada turned a CAD107 million (USD 107 million) profit in 2010, it sustained losses of CAD24 million (USD24 million) in 2009. During 2008 Air Canada bled CAD1 billion (USD1 billion), which was followed by concessionary agreements reached with labour groups in 2009 to avoid a second stint in creditor protection after its emergence in 2004.

Part of Air Canada’s strategy to avoid seeking creditor protection in 2009 was to embark on a cost transformation and revenue generating scheme, and CEO Calin Rovinescu on 07-Feb-2013 declared to analysts that the airline has exceeded its CAD534 million (USD535 million) transformation target. 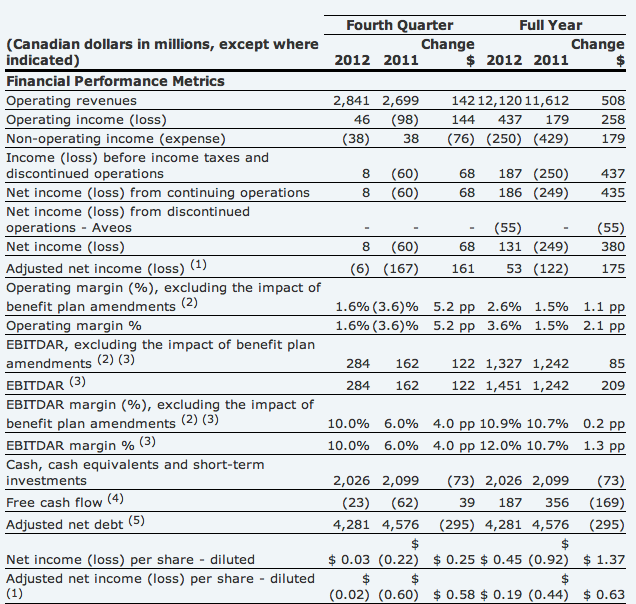 Air Canada’s wringing of costs from its business, coupled with changes to collective bargaining agreements the carrier attained during 2012 with the help of government intervention, will allow the company to narrow its cost differential with its main competitor, said Mr Rovinescu. He concluded that up until now, WestJet has enjoyed its cost advantage by operating a single fleet type, working with a non-unionised workforce and not being burdened with pension funding obligations.

But WestJet is evolving its business model, most notably through the addition of 78-seat Bombardier Q400 turboprops in 2H2013 when the carrier debuts its new regional subsidiary Encore.

Air Canada’s unit costs increased 1% during 2012 compared to a 3% rise at WestJet. However, Air Canada’s overall CAD11.8 cents (USD11.8 cents) unit costs were higher than the CAD9.1 cents (USD9.1 cents) recorded by WestJet. But WestJet is not blind to its unit costs rising at a faster clip than its rival, and has undertaken its own CAD100 million (USD100 million) cost-cutting scheme in order to widen the cost advantage it still enjoys over Air Canada.

Strong unit revenue and yield growth in most international markets

A 4.3% rise in top-line revenue to CAD12 billion (USD12 billion) helped lift Air Canada to profitability during 2012, with system passenger revenues increasing 5.2% to CAD10.7 billion (USD10.7 billion). The carrier recorded both unit revenue gains and yield growth across all of its regional entities with the exception of its US transborder markets, where yields fell 3% driven by a 2.7% drop in unit revenues.

Air Canada’s rivals WestJet and Porter during the last year have been introducing capacity into the US northeast, with WestJet making a push into New York LaGuardia. Commenting on the operating environment on those routes, Mr Rovinescu noted it is natural tendency for new entrants to introduce discounted fares. The carrier does not see any immediate change in the behaviour of its competitors in the transborder space, but executives are hopeful that at some point supply in those markets will become more rational.

The carrier is facing the same issues in the high-yielding business markets between Toronto, Montreal and Ottawa as WestJet in particular added more capacity to those markets during May-2012 through frequency increases to make its schedule more attractive to business travellers.

Despite the competitive pressure on some of its busiest routes, Air Canada in 2012 increased unit revenues in the Canadian domestic market by 3%, which helped to lift yields 1.2%. Flat capacity growth in its trans-Atlantic market helped Air Canada stave off a weak performance on those routes as economic uncertainty plagued Europe for the better part of 2012. Unit revenues in Air Canada’s Atlantic markets grew 4.2% during the year and yields increased 2.1%.

Following a consistent trend throughout 2012 Air Canada’s Pacific markets were the top performer among the carrier’s regional entities for the year. Unit revenues grew 13.5% while yields jumped 11.9%. Expressing a similar sentiment made by other North American airlines, Air Canada CFO Michael Rousseau stated the carrier recorded improvement during 4Q2012 in all its major Pacific services, with the exception of Japan. During 4Q2012 Air Canada’s unit revenues in its Pacific markets grew 10.6% and yields increased 7.7%. Both Delta, the largest carrier between the US and Japan, and Hawaiian also expressed diminished performance in their Japanese markets due to the weakness of the Yen. Hawaiian faces a particularly challenging time as most of its rapid expansion during the last couple of years had been primarily in Japan.

As WestJet moves to intensify competition with Air Canada even further with the launch of Encore targeting some of the legacy carrier’s monopoly regional routes, Air Canada is turning its attention towards its long-haul international network, where its competitive threats with WestJet are essentially non-existent.

Building on its momentum in the Pacific, Air Canada in 2013 is introducing flights from its Toronto hub to Seoul, South Korea, competing with SkyTeam’s Korean Air, and adding three weekly departures between Toronto and Beijing, resulting in 10 weekly flights in the market. The carrier is also bolstering frequencies from Vancouver to Beijing by four for a total of 11 weekly services on the pairing. Rounding out the push to Asia is the upgrading of Calgary-Tokyo Narita flights to daily from five per week.

Air Canada also plans to tap the network of fellow Star Alliance member Turkish Airlines during Jun-2013 when it inaugurates flights from Toronto to Istanbul, accessing markets in central Asia, Africa and the Middle East through a codeshare with Turkish.

Another interesting move by Air Canada is the carrier’s plans to operate higher density Boeing 777-300ERs in certain international markets with a high volume of demand for economy travel. The carrier is adding three 777s to two previously-announced aircraft it ordered for delivery in Jun-2013 and Aug-2013, with the additional deliveries planned for Nov-2013, Dec-2013 and Feb-2014.

The new delivery 777-300ERs will feature a new premium economy offering from Air Canada that also includes other elements including priority check-in and baggage delivery and premium meals. Air Canada’s move to a premium economy appears to be an effort to keep up with its global airline competitors. Outside North America, where an economy plus product that basically offers more legroom is prevalent, the premium economy concept is more widespread. Air Canada’s five 777s scheduled to arrive in 2013-2014 will be configured with 458 seats – 398 in standard economy, 24 premium economy and 36 in the executive first cabin. The carrier operates the 12 777-300ERs presently in its fleet in a two-class configuration with 307 seats in the economy cabin and 42 in executive class.

Air Canada will debut the higher-density 777s in Jul-2013 on flights from Montreal to Paris. The carrier has not outlined specific routes for the remaining three-class 777s joining its fleet, but some of the aircraft are likely pegged for Asian routes. Many Asian carriers serving Canada including Air China, Cathay Pacific, China Airlines, China Eastern and Eva Air offer a premium economy class, so Air Canada is looking to offer similar products to maintain parity with its global competitors. Air Canada's main competitor on the Montreal-Paris pairing Air France also features a premium economy product. Domestic rival WestJet is scheduled to debut a premium economy product on its Boeing 737 narrowbodies in 2Q2013, but Air Canada presently has no plans to offer its premium economy product on its domestic aircraft, reasoning that its preferred seats product offering more legroom is comparable to the economy plus products offered by North American carriers.

Mr Rovinescu stressed that the addition of the five 777 widebodies are allowing Air Canada to pursue strategic growth opportunities in its network, and the new configuration of those aircraft would provide the carrier with a tool to compete more effectively on select markets with high volume demand for economy travel.

Air Canada appears to be using a two-prong strategy in the leisure market, as its new low-cost carrier Rouge debuts new 767-operated service from Toronto to Edinburgh and Venice during the northern hemisphere’s summer high season in Jul-2013. Rouge is also assuming Air Canada’s mainline service from Montreal and Toronto to Athens.

It appears Air Canada's 777s with the new configurations are targeted toward markets with high volume economy customers with some premium demand while Rouge's service is being deployed in pure leisure markets where customer are price sensitive. The carrier has paired Rouge with its vacation business to improve competition with Canadian tour operators including WestJet and Air Transat. Rouge will compete with Air Transat on the new service to Venice, but faces no competition on flights to Edinburgh.

Air Canada’s focus on its international network is a means to sustain its profitability given the advantage it holds over WestJet in offering a broader network. The strategy could work in the short term as WestJet focuses on building its regional carrier, but Air Canada’s main rival is already making rumblings about acquiring widebodies. As it works to craft a sustainable business model, Air Canada must factor in competitive threats from WestJet and other global carriers to survive in the new world order.