Air Canada’s plans to create a new leisure group business, pairing its existing vacations business and its new low-cost subsidiary, is set to debut in Jun-2013 and should prove an interesting strategy to combat some of the heavy hitters in the Canadian tour business – including the carrier’s familiar rival WestJet and other competitors Sunwing and Transat.

To illustrate it is serious, Air Canada has appointed a seasoned travel industry veteran to head the new venture, which appears to have the dual role of shoring up the performance of some lacklustre markets and its existing vacations business.

The carrier is also adjusting its mainline fleet as it plans to launch the new low-cost carrier with two Boeing 767 widebodies and two A319 narrowbodies. Two Boeing 777-300ER aircraft are scheduled to join Air Canada’s fleet in Jun-2013 and Sep-2013.

The company also awarded new business to current partner Sky Regional airlines through the transfer of 15 two-class 73-seat Embraer 175 jets from the mainline fleet, taking advantage of greater flexibility in its regional operation the carrier secured when an arbitrator imposed management’s contract terms on pilots in Jul-2012.

Air Canada has been slowly leaking details about its planned low-cost operation since the arbitrator ruled in the company’s favour and required that the carrier’s pilots adopt management’s contract, which gave Air Canada the go-ahead to develop the new subsidiary containing a lower pay scale for pilots. The carrier aims to offer a Caribbean and European network comprised of new service and the transfer of existing routes that are under-performing in the mainline cost structure.

Combining the low-cost operation with its vacation business under one new leisure group could provide Air Canada with greater leverage in its vacations business with respect to negotiating contracts with travel package suppliers. During 1H2012 Air Canada faced challenges in revenues collected from ground packages at Air Canada vacations.

During 2Q2012 the carrier’s “other revenues” line item fell 8% year-over-year to CAD196 million (USD198 million) driven largely by lower selling prices of ground packages and lower passenger volumes within Air Canada Vacations. Some of the decline in revenue in the company’s vacations business during 2Q2012 was a result of workforce disruptions at Air Canada as contract negotiations between management and pilot and mechanics turned tense earlier in the year.

Perhaps by combining its new low-cost leisure-driven airline with its existing vacations business, Air Canada sees an opportunity to improve its fortunes in the leisure space. The appointment of travel industry veteran Michael Friisdahl as CEO of the new group reflects Air Canada’s goals of improving its performance in the leisure space. Mr Friisdahl was previously head of large leisure travel group Thomas Cook North America, where he was highly regarded. Thomas Cook Group plc's group CEO, Sam Weihagen, said at Mr Friisdahl's retirement from that group that his career with Thomas Cook "has been an impressive one and his contribution to the travel industry over the past 30 years has been significant."

The carrier is likely banking that Mr Friisdahl can use his deep travel industry ties to forge better supplier relationships that could benefit Air Canada in creating vacation packages. Air Canada is also likely to be calculating that by coupling its low-cost carrier that is staffed with employees at lower pay scales and higher density aircraft, it can offer lower priced packages (that include lower cost flights than what it currently offers in mainline service) that could turn its new leisure group into more of a consistently profitable enterprise.

But Air Canada faces familiar and formidable competition as it seeks to create a viable travel business targeted toward the leisure market. Aside from competing with WestJet in the vacation space, Air Canada’s other main competitor Transat is undergoing a business overhaul as it returned to the black in 3QFY2012, rebounding from a 1HFY2012 after tax loss of CAD55 million (USD56 million).

Transat is also in the midst of a scheme to improve its pre-tax earnings by CAD50 million (USD51 million) by FY2014, and remains on track to achieve CAD20 million (USD20 million) of that goal in FY2012. If Transat successfully attains the earnings target by its self-set deadline, it will be a somewhat nimbler competitor as Air Canada works to build up its low-cost carrier to the planned full scale of 50 aircraft. The company has not disclosed a timeframe of when it plans to scale up to the full fleet of 30 A319s and 20 767s, but it is likely Transat will meet its profitability targets prior to Air Canada’s spool up. Even as Transat works to achieve sustained profitability, Air Canada has the ability in the short term to offer competitive pricing in the leisure space, as its other lines of business can absorb short-term losses as the company works to gain a better footing in the package travel business. Transat could see revenue pressure from the initial discounting Air Canada will use to promote its new leisure travel segment.

Air Canada’s intensified focus on the leisure market by the combination of its low-cost airline and vacations business does carry the risk that it could eventually disrupt capacity balances on both the air travel and hotel side, driving down package prices and pressuring profitability in those business segments, an outcome that would run counter to Air Canada’s goal. While it will take some time before Air Canada could threaten the capacity balance, its gamble on reversing its fortunes in the leisure travel segment contains challenges, especially as economic uncertainty threatens to spook consumers from committing to travel if they determine their discretionary income is tenuous.

Sky Regional ties are being expanded

As it works to disclose the initial schedule for its low-cost carrier sometime in the winter of 2013, Air Canada also plans to transition 15 Embraer jets to Sky Regional from Feb-2013 to Jun-2013. The decision reflects its strategy to diversify its regional operations away from long time partner Jazz, which operates 125 aircraft on behalf of the carrier. Challenges for Jazz’s parent company Chorus Aviation are intensifying as its efforts to diversify its business have largely failed. The company was also dealt a blow when an arbitrator again sided with Air Canada in a long-running dispute it had with Jazz over certain mark-up payments, which could put significant pressure on Chorus’ bottom line.

Sky Regional currently operates five Bombardier Q400 turboprops from Billy Bishop Toronto City Airport under a deal with Air Canada, and once the transition of the E-Jets is complete, Sky Regional will more than double the number of aircraft covered under its agreement with Air Canada.

Under the contract terms imposed on Air Canada’s pilots, the carrier can deploy up to 60 jet or turboprop aircraft with 76 seats into regional operations as long as certain levels of flying are maintained at Air Canada mainline.

And Jazz runs into more headwinds

While Jazz’s fleet of 125 aircraft operated for Air Canada will still dwarf the 20 planes that will eventually operate with Sky Regional, Air Canada’s decision to award the flying to another carrier caps off a difficult string of negative business developments for Jazz in its quest to grow business beyond its capacity purchase agreement with Air Canada. 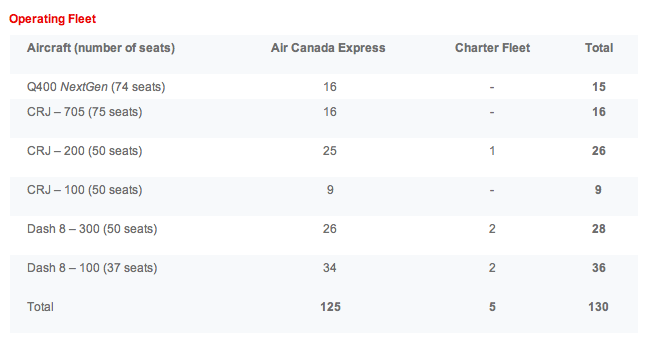 In Apr-2012 Thomas Cook opted not to renew a charter agreement with Jazz, and instead awarded the business to WestJet. The loss of the Thomas Cook contract was followed by the sudden demise of Uruguayan carrier Pluna, which Jazz parent Chorus held a stake in prior to its closure. During 2Q2012 Chorus recorded a CAD16 million (USD16 million) write-down related to the investment in Pluna.

The latest blow to Jazz is yet another ruling by a federal arbitrator that appears in Air Canada’s favour regarding a dispute between the two carriers over mark-up rates charged by Jazz on controllable costs incurred as part of its operations for Air Canada. The two sides have been locked in arbitration over how the mark-up should be calculated. Chorus stated on 03-Oct-2012 that the arbitrators had ruled Air Canada’s methodology should be adopted, but that it was still awaiting clarity on some other items included in the ruling.

Previously, Chorus has stated a decision in favour of Air Canada would require a payment from Chorus to its legacy partner of up to CAD26 million (USD26 million). As of 30-Jun-2012 Chorus had a cash balance of CAD92 million (USD93 million). The possible payment due to Air Canada thus accounts for 28% of Chorus’ cash balance, which will place pressure on the company’s liquidity if it has to pay the full amount. Chorus faces the payment as efforts to successfully diversify its business have not materialised and competition intensifies to capture the remainder of the 60 aircraft Air Canada plans to place with regional operators.

After a difficult couple of years, and armed with key favourable rulings from Canadian government arbitrators, Air Canada is steadily moving to lay the groundwork necessary to complete a pronounced turnaround of its business. But putting the pieces for a rebound in place and executing the strategy effectively are two very different concepts, and Air Canada has much to prove before its efforts can be judged a success.

Just as it is steadying the legacy forces which have caused it so much recent pain, economic uncertainty is increasing. The leisure sector is however an area where a more aggressively priced and packaged product has the potential to stimulate traffic, while business activity languishes. Standing still was clearly not an option and these moves in the leisure and regional sectors appear to be steps in the right direction. Now to enthuse some of the reactionary legacy forces in pursuing these new directions.