Worldwide passenger traffic rose by 7.6% in Mar-2010 year-on-year and by 6.1% for the first quarter, according to the latest figures from Airports Council International (ACI). The freight resurgence continued, with a 25.6% rise in total volumes in Mar-2010, led by a 32.4% surge in international freight, while domestic volumes rose 14.6%. 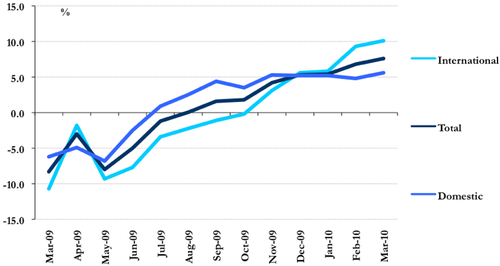 ACI commented the freight figures in March have completed a “remarkable” first quarter, “representing a stark, yet not surprising contrast to the first quarter 2009”. Inventories are being replenished and global demand for goods is picking up, leading ACI to comment that international freight, in particular, "seems on track to full recovery”. 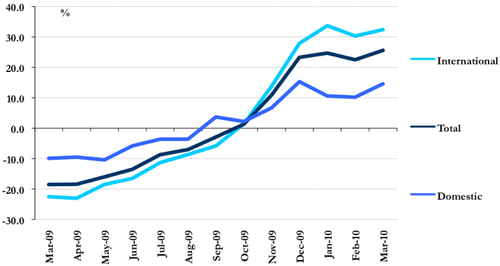 However, the organisation’s Director General, Angela Gittens, warned against complacency, stating that while world markets continue to rebound, "we must remember that traffic volumes in the first quarter 2010 are still below pre-crisis levels”. Global passenger numbers are still down by 3% compared to 1Q2008 and are up a “mere” 1.5% on 1Q2007 levels, according to ACI.

ACI added that the figures also disguise major differences among the regions. The two largest markets, Europe and North America, remain significantly behind volumes reached in 2007, particularly in the US domestic and the intra-European markets.

Latin America and Caribbean: Results from Latin America and Caribbean (LAC) region are without data from Brazilian airports, due to technical reporting problems this month. Nor has Santiago de Chile (SCL) reported its traffic.  Also, a record result of passenger demand for GOL in Brazil, but also flight cancellations of LAN from SCL due to the earthquake in Chile would have significantly altered domestic and international figures in that region. These factors critically decrease the validity of the LAC sample for the month of March. It is to be noted that the picture in Mexico is still mixed, with Mexico City declining by 7 percent whereas Cancun grew by 1.4 percent and Guadalajara by 10.3 percent. Elsewhere Quito (+9.5%) and Lima (+9.4%) had strong domestic traffic growth. Both airports in Buenos Aires (mainly domestic AEP +37.6% and mainly international EZE +3.6%) round off the positive picture.

Others continue to struggle to recover domestic traffic, but which is offset by international growth: Newark (+2.1%), JFK (0%), Toronto (+4%) and Vancouver (+2.6), or inversely in Boston (+8%) where strong domestic traffic offset a drop in international passengers.  New York La Guardia registered the fastest growth (+11.6%), followed closely by Austin (+11%) and Washington DCA (+9.4%).

ACI concluded that though the growth trend is encouraging, “we must not drop our guard”. Ms Gittens stated, “sudden changes in our business environment due to external causes – whether health, economic factors, or natural disasters – can quickly overturn a situation”.

ACI stated the abrupt traffic stoppage last month due to the volcanic eruption in Iceland (which is closing UK/Ireland air space again this week) will put a "significant dent" in Apr-2010 figures, representing a setback in the catch-up process, particularly in Europe.