Now that the dust appears to be settling in Mexico’s aviation industry after rapid changes during the last decade, the country’s surviving upstarts are taking the next steps in their evolution through initial public offerings. Interjet opted to postpone its IPO in 2011 to await for more favourable market conditions, which must be improving given that its LCC rival Volaris has filed preliminary prospectuses for listings on both the New York and Mexican stock exchanges.

Volaris’ moves to go public follow a recent declaration by fast-growing Brazilian carrier Azul that it is planning an IPO following its acquisition of fellow regional carrier TRIP in 2012. But the similarities end there as growth in Brazil’s domestic market is slowing in parallel to cooling GDP growth. Brazil is also a much bigger domestic market served by only two LCCs while three LCCs continue to compete in Mexico, which has the second biggest domestic market in Latin America after Brazil.

Volaris and its Mexican LCC counterparts are still moving to seize on available growth opportunities within the country as a large swath of Mexico’s residents still travel by bus. The calculus is offering fares similar to those charged by bus companies to Mexico’s burgeoning middle class, which has been on a steady growth trajectory since 2000.

Volaris was one of several low-cost carriers that debuted in Mexico during the mid-2000s after the country’s aviation market was deregulated. Volaris has emerged as one of the survivors along with Interjet and VivaAerobus as ALMA and Avolar shuttered operations in 2008.

AeroCalifornia, Azteca and Aviacsa also have exited the market over the last several years. Interjet, Volaris and VivaAerobus along with Aeromexico benefitted most from the abrupt collapse of Mexicana in late 2010, which created prime opportunities for those carriers to backfill Mexicana’s service, particularly its slots at Mexico City Juarez that were temporarily distributed to some of the country’s surviving airlines.

The changing economic dynamics of Mexico’s populace show that there is still room for stimulation in the market. Volaris in its prospectus remarked that Mexico’s GDP growth should average 3.5% for 2013 and 2014, which is lower than its 5.6% peak in 2010, but higher than 1.5% and 0.5% respective growth projected for the US in 2013 and 2014. Recently, management at Brazil’s second largest carrier Gol remarked that it is doubtful that GDP growth of Latin America’s largest economy would reach its projected 2.5%.

The number of Mexican households categorised as middle class has grown from 12 million in 2000 to 15 million in 2010, Volaris stated. As of 2010 about 39% of Mexico’s population was below 20 years of age, providing the carrier with a robust base of potential future passengers.

Compiling data from aviation authorities in Colombia, Mexico, Panama and the US, Volaris estimated that adjusted for income, domestic and international trips per capita during 2011 were 0.46 in Mexico, 1.71 in the US, 1.78 in Panama, and 0.58 in Colombia.

Estimated trips per capita for select Latin American countries and the US: 2011

Volaris financial results have been relatively stable during the last five years. Based on data published in its prospectus, Volaris recorded three annual profits in the five-year span ranging from 2008 to 2012.

The USD24 million loss it recorded during 2011 was largely attributable to the introduction of 15 new routes it debuted from late 2010 to 2011 that were previously operated by Mexicana. Volaris was able to access six routes from Mexico City to the US, which helped it expand its transborder footprint. Yet at the same time the swift ramp up created additional costs and operational challenges.

Rounding out its network through a new domestic push during 2012

Volaris began making its international transborder push around 2009, and has grown its market share in the international space among Mexican carriers from 3% to 23% as of Dec-2012. The carrier also estimates that roughly 24% of its USD946 million passenger revenues in 2012 were attributed to its US transborder routes while 26% of its capacity was dedicated to international service. 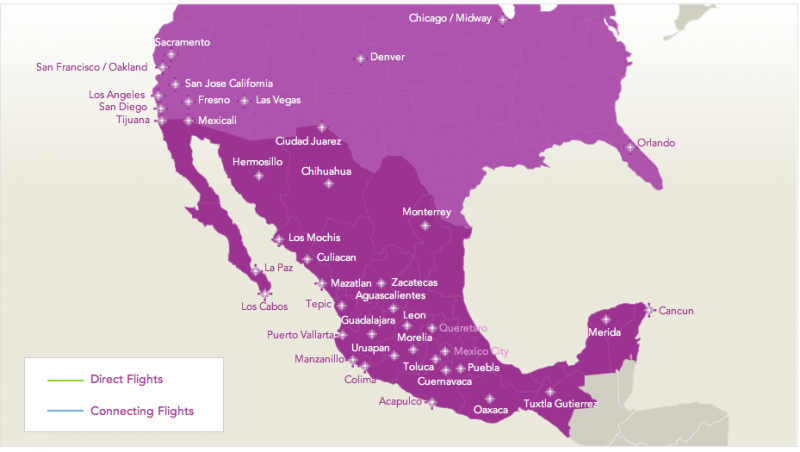 As the government dispersed Mexicana’s slots after its demise, Volaris built up its operation in Mexico City to roughly 20 routes – 13 domestic and seven international – and now Mexico City Juarez is its largest base in terms of seats on offer. Its headquarters remains at nearby Toluca, where Volaris still operates service to Cancun and Guadalajara. 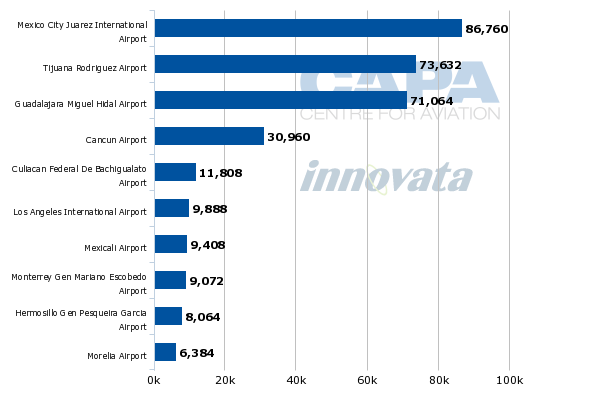 Since its launch in 2006 Volaris has built up a network of 80 routes connecting 30 cities in Mexico and the US. Mexico City, Cancun, Guadalajara and Tijuana accounted for 64% of its departing ASMs during 1Q2013, according to the carrier.

Guadalajara has risen in prominence in Volaris’ network during the last couple of years, especially during 2012 when the carrier opted to shift its focus back to domestic expansion after building up its international presence over the previous three years.

Volaris made a pronounced push from Guadalajara during 2012 as it introduced domestic service to Chihuahua, Monterrey, Puebla, Los Mochis and Cancun in order to build a position of strength in Mexico’s second largest city. On a system-wide basis Volaris is the leading carrier in Guadalajara, accounting for 35% of the seats on offer.

The carrier's leading position in Tijuana is more pronounced with a 71% seat share, while it holds a commanding 31% share of the domestic seats on offer from Cancun, another market where Volaris has made a domestic push during the last year. While its slots at Mexico City are technically being operated on a temporary basis, the resurgence of Mexicana grows less likely nearly three years after it ceased operations. Volaris has become the third largest carrier at Mexico City Juarez in terms of seats on offer, holding nearly an 11% share.

Outlining its network build-up to potential investors, Volaris estimated that as of 31-Dec-2012 it achieved a more than 50% market share in 48 of its 71 routes (it has had several route launches in 2013). The carrier also declared it faced no direct competition from other carriers on roughly 28% of its domestic seating capacity.

Like many LCCs, Volaris recognises it needs a diverse passenger base in order to ensure consistent demand throughout the year. Presently it targets the three major groups: visiting, friends and relatives (VFR); leisure travellers; and cost-conscious business travellers.

VFR passengers account for its largest segment. But Volaris tries to balance the typical crests and troughs of VFR with the seasonal ebb and flow of leisure travellers and the more consistent year-round travel of business customers.

Consistent with strategies adopted by global ultra low-cost carriers, Volaris in mid-2012 embarked on a product unbundling strategy that resulted in non-ticket revenue generation of USD15 per passenger flight segment compared with USD7 in 2009.

The unbundling campaign, dubbed Tu Decides (You Decide), includes the now-typical offerings of advanced seat assignment, extra legroom and excess baggage charges. Similar to ultra low-cost pioneer Spirit Airlines, Volaris has also launched a product dubbed V-Club, where customers pay an annual fee, and in return gain access to the lowest fares on offer and discounted baggage fees. Other benefits include sales and private offers on hotels and rental cars.

In early 2013 Volaris launched an affinity card programme that allows holders to gain priority boarding, 10kg extra luggage on flights and access to the Visa lounge at Mexico City Juarez. The carrier has yet to introduce a loyalty programme, but perhaps the credit card initiative is the predecessor to a more formal frequent flyer scheme. If Volaris aims to enlarge its base of cost-conscious business travellers, a loyalty programme will be necessary to make those passengers feel a certain level of eliteness even as the carrier sticks to an ultra low-cost business plan.

Resting its near future on a single Airbus A320 fleet

Volaris as of 31-Mar-2013 had roughly USD75 million in cash and USD76 million in debt. It reportedly aims to raise USD100 million from its public offering to pay off a USD20 million loan from Banco Inbursa due in full by May-2015 and other debt of USD10 million. The remainder of the proceeds will be used in part for pre-delivery aircraft deposits to cover 49 Airbus narrowbodies on order, including 30 A320neos.

The carrier aims to phase out its A319s and transition to an all A320 fleet by 2020. It touts the cost advantage its 174-seat A320s has over the 150-seat A320 configuration of its rival Interjet. But Interjet, a hybrid carrier which focuses more on business passengers, is also adding a second smaller fleet type with the impending delivery of its first 93-seat Superjet 100. While the introduction of a smaller type carries risk and added expense, Volaris at some point may need to consider a smaller aircraft to serve secondary markets.

Since its inception Volaris has used business tactics that have been successfully replicated by other ultra low-cost carriers, and it seems the Mexican market still has ample opportunity for Volaris to continue to replicate that strategy. For now, all of Mexico’s large LCCs are generally co-existing with one another and Aeromexico.

The key is for those carriers to continue to run their businesses sensibly and not forget the irrationality of the past. CAPA reported in Jan-2013 that Volaris plans 20% capacity growth in 2013 after recording a 17% increase during 2012. While those numbers are large compared with other mature markets, Volaris must convince would-be investors that it is exhibiting rational supply growth.

The rapid growth it instituted to gain a foothold in Mexico City during 2011 produced some pain in the form of loss for that year. And its USD16.5 million profit recorded in 2012 was a 68% drop from the USD50 million recorded in 2010.

Volaris appears to be making a push to go public before its rivals Interjet and VivaAerobus can access the markets as both those carriers have hinted they might take a run at becoming public during 2013. Even as Interjet postponed its 2011 IPO as conditions weakened, Aeromexico successfully raised more than USD300 million from its public offering.

If all three Mexican LCCs access the markets during a single year the already-tenuous appeal of airline stocks might weaken. Perhaps Volaris’ move to convince those investors of its business case might temper the ambitions of its rivals to make similar moves in 2013.