The airline cost equation: strategies for competing with LCCs

In spite of all the talk of business model convergence, there are still meaningful unit cost differences between low cost airlines and full service/legacy airlines. Anyone can unbundle and offer seat-only low fares, but this is not the same as having the low costs necessary to be profitable with such fares. Business model choice has implications for cost structure as well as for revenues.

The CAPA CASK Database records data on unit cost, defined as cost per available seat kilometre, for around 100 airlines globally. A scatter plot of CASK versus average trip length for all these airlines demonstrates that there is still a discernible difference between the unit cost levels of full service carriers compared with low cost carriers.

There are some airlines that straddle the intersection between the two categories in unit cost terms, but that has been the case for years.

FSCs also typically have higher unit revenues than LCCs, but there is no evidence to suggest that they achieve higher margins (if anything, the opposite may be true). 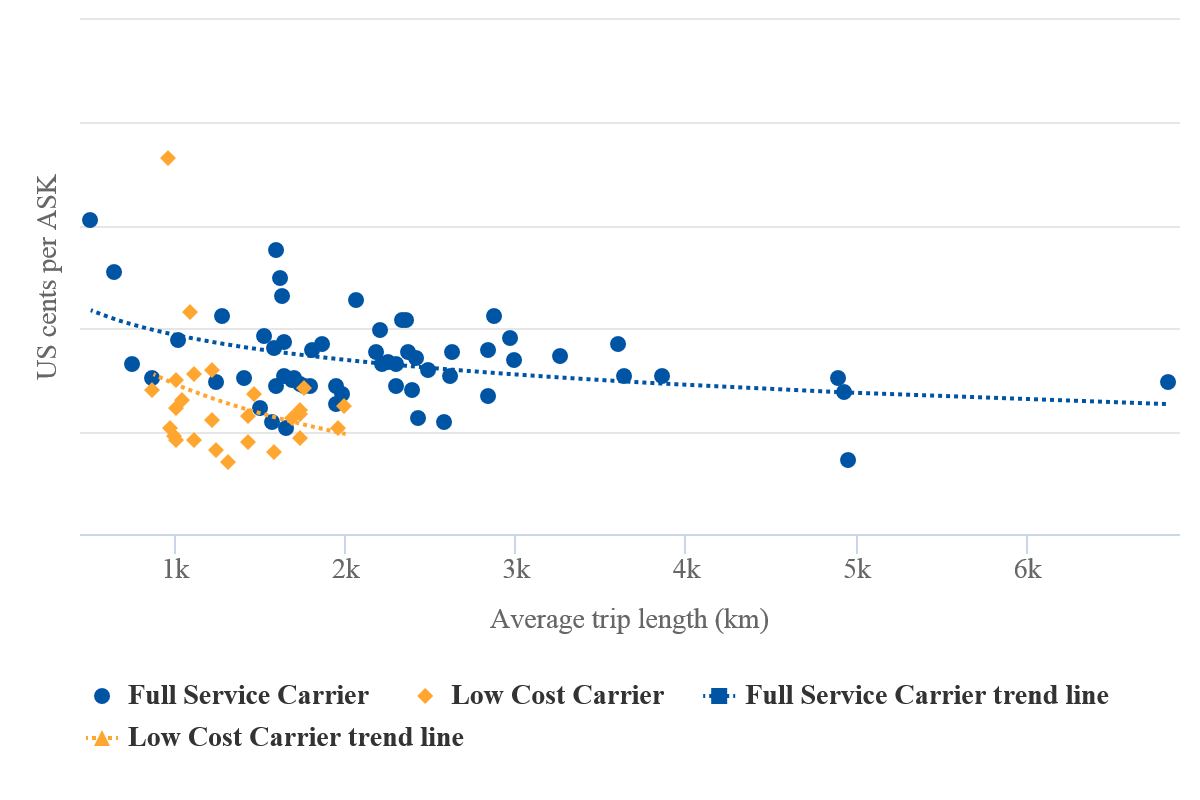 The business model chosen has significant implications for cost structure

In fact, a more detailed examination of the scatter plot allows a subdivision of airlines into four broad categories. Their unit cost/average trip length positions on the chart correspond fairly well with their business model.

Decisions about which business model to pursue have significant implications for cost structure. Although it is possible (and desirable) to be more cost efficient than others within the same broad business model grouping, it is very difficult to escape the unit cost boundaries set by the chosen business model.

Legacy airlines have responded in a number of ways to the growth in competition from LCCs, but LCC penetration continues to increase.

This share is higher on short/medium haul routes: in Europe, for example, LCC penetration was 40.4% on routes within the continent in 2017.

However, the rise of low cost operators is not confined to short/medium haul routes. Recent CAPA analysis has shown that the LCC share of seats on routes between Europe and North America rose from virtually zero in 2013 to 8% in 2018.

The responses of legacy airlines to low cost competition have taken several forms.

The overarching response, not only to LCCs, but to the ongoing competitive pressures in the industry, including the volatility in fuel costs and the fluctuations in unit revenue, is to pursue cost reduction.

Almost all legacy airlines are at any given time in the middle of their latest cost reduction programme, although this is more an ongoing feature of doing business than an attempt to convert into a low cost model.

Some legacy airlines have attempted to change themselves wholesale into low cost operators in the past, for example Aer Lingus in the mid-2000s, but this is quite rare.

Other responses include adopting many of the features of low cost airlines, such as unbundling and charging extra for everything apart from the seat, in addition to offering a traditional bundled product.

This is now common on short/medium haul routes, but is also starting to occur on intercontinental routes. It is a form of price discrimination aimed at segmenting the market according to customers' willingness to pay, thereby maximising the potential revenue – in theory at least.

However, without a fundamental and dramatic reduction in unit costs entry level fares are unlikely to be profitable, and legacy airlines still need to rely on the bundled product, or at least on a large slice of ancillary revenue from selling the extras, in order to cover costs.

At the same time, however, many LCCs have adopted FSC features, such as bundling up product features and offering some premium elements. Very often they have achieved this without significantly adding to their cost base.

Faced with the dilemma of selling basic unbundled products, but with a high cost base, a common alternative to a full transformation into a low cost operator is for the legacy airline to establish (or buy) an LCC subsidiary.

However, particularly in Europe and Asia Pacific, a second wave has proved more enduring.

Lufthansa, with Eurowings, and Air France-KLM, with Transavia, have taken pre-existing small subsidiaries and grown them into more significant and focused low cost operators.

In Asia Pacific Qantas set up Jetstar, and Singapore Airlines set up Scoot and Tigerair (the latter initially as a minority investment) before merging the two. ANA has two LCC subsidiaries, Peach and Vanilla Air, which it is now in the process of merging. Air India has Air India Express, and HNA Group, which owns Hainan Airlines, also owns Beijing Capital Airlines.

In North America, US legacy airlines continue to eschew low cost subsidiaries, although Air Canada has had some success with Rouge. Now Canadian LCC WestJet is launching an ultra-low cost subsidiary, Swoop, further highlighting the different approach in Canada compared with the US.

Not all LCC subsidiaries are genuinely low cost (for example, Eurowings has a CASK level more consistent with the more efficient FSCs), but they all have lower cost than their parents. This not only allows growth with a lower cost base operator, but also helps management to apply more pressure on labour in its mainline legacy airlines to lower costs and increase productivity.

In addition to adapting their own business model and setting up or buying LCC subsidiaries, some legacy airlines are also forming commercial partnerships with low cost operators.

Examples include codeshares within airline groups, such as between Vueling and Iberia and British Airways, between Eurowings and Lufthansa, or between Scoot and Singapore Airlines.

There are also codeshares between LCCs and legacy airlines with no equity relationship, such as between Pegasus Airlines and Alitalia or KLM, and between Transavia and Delta (although Delta has a stake in Transavia's owner Air France-KLM).

Relationships between legacy airlines and LCCs that stop short of codeshare include Air Europa's partnership with Ryanair, whereby the Irish LCC sells Air Europa long haul flights from Madrid via its website and plans to offer connections between the two networks.

The logic of legacy airlines making greater use of LCCs, whether through low cost subsidiaries or through partnerships with independent LCCs, is that they have lower costs and can operate more efficiently.

Particularly on short/medium haul feeder routes, this logic inevitably leads to an increasing market share for LCCs and a falling share for legacy airlines (and this has been played out for a number of years).

While exploitation of LCCs should not be eschewed, legacy airlines cannot lose focus on cutting their own costs. In the current period of historically high airline operating margins, it is easy to lose sight of this.

Given that previous cycles had not exceeded around 6% since before the jet age, the industry is currently enjoying a golden era of profitability. Nevertheless, operating margins remain single-digit and are falling. As oil prices climb once more, the pressure is growing on the industry to cut ex fuel unit costs.

However, according to CAPA calculations based on data from IATA and ICAO, the world's airlines have not done a great job with ex fuel costs in recent years.

In 2017 ex fuel unit cost increased by an estimated 3% year-on-year. Compared with the last year in which the industry recorded an operating loss, 2008, ex fuel CASK was almost unchanged in 2017 (it was reduced by just 2%), while RASK fell by 15%, and the 22% fall in total CASK owed almost everything to a 59% collapse in fuel CASK.

Cost control is a top priority

Together with capacity, control over costs is a top priority for any airline. The business model chosen has significant implications for cost structure, but competitive pressures mean that airlines with a more efficient cost base have an advantage.

Moreover, cost reduction, focused on ex fuel costs, is not just about competition between different airline business models, but is vital at an industry level in a rising oil price environment.