LCC seat share on the North Atlantic has grown from almost nothing five years ago to 8% in summer 2018, higher than in any long haul market from Europe (LCCs have 1.0% on Europe-Asia Pacific, 1.7% on Europe-sub Saharan Africa, and 3.4% on Europe-Latin America).

The dominance of immunised joint ventures involving the leading legacy airlines is being eroded, in no small measure due to LCC expansion. In particular, low cost narrowbody growth is now outpacing LCC widebody expansion in this market.

History shows that the North Atlantic can be challenging for low cost airlines. Today, aircraft technology and the liberalisation of traffic rights have transformed the market and North Atlantic LCCs now appear to have a strong tailwind.

According to preliminary data from OAG Schedules Analyser for 2018 airline schedules, LCCs will grow seat capacity in the North Atlantic by 59.9% this year. This compares with non-LCC growth of 3.8% and total market growth of 6.6%.

Total LCC seats between Europe and North America will be nine times the number deployed in 2014, which was the first full year after Norwegian entered this market.

LCC seat share will be 7.7% in 2018, still quite low, but now at a level that is clearly visible and a very big increase compared with 0.2% just five years ago. Even as recently as 2016, LCCs had only 3.0% of North Atlantic seats. 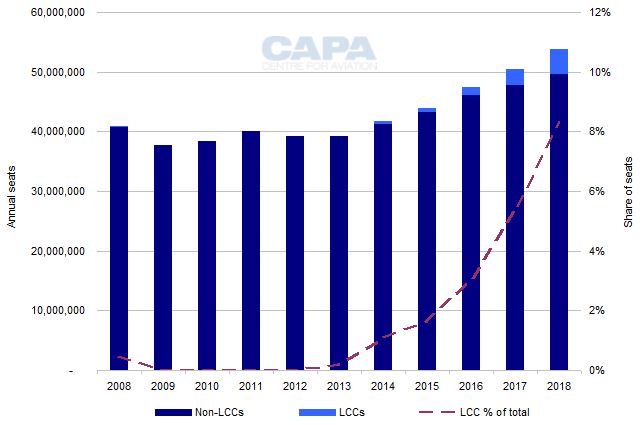 The leading LCC on the North Atlantic by seat numbers is Norwegian, whose seat share of the total market will be 4.8% in 2018, based on current OAG data (this includes Norwegian Air Shuttle, Norwegian Air International and Norwegian Air UK). Its capacity this year will be nearly two thirds higher than in 2017 (up by 64.1%).

New entrant Primera Air will have 0.4% of North Atlantic seats (0.5% in the summer season) with its routes between Europe (London Stansted, Paris and Birmingham) and North America (New York Newark, Boston, Toronto and Washington DC) this summer. It plans an all-narrowbody operation.

Eurowings, with a share of 0.3%, is the only other LCC with more than 0.1% of seats. New entrant French Bee (formerly French Blue), with a new Paris Orly-San Francisco-Papeete service this summer, and Jet2.com (in focused seasonal operations) are also active in this market in 2018. 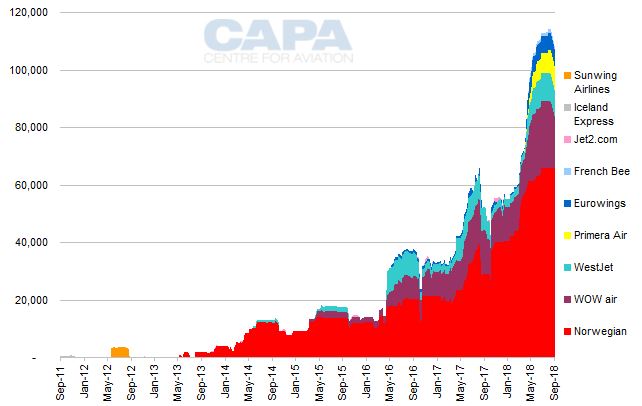 *All routes between Europe and North America.
Source: CAPA - Centre for Aviation, OAG.

Immunised JVs are losing share on the North Atlantic

LCC growth on the North Atlantic is having an impact on the market share of the antitrust immunised joint ventures that lie at the heart of the three branded global alliances.

The JV within the Star Alliance (Lufthansa Group excluding Eurowings, plus United and Air Canada) will increase seat numbers by 4.2%, but its share of seats will fall from 27.9% in 2017 to 27.2% this year.

*All routes between Europe and North America.
**Includes all members of the three JVs within the branded global alliances throughout the period; includes Virgin Atlantic (in JV with Delta) from 2014 only.
Source: CAPA - Centre for Aviation, OAG Schedules Analyser.

The strong growth in non-JV seat capacity this year is driven by LCCs, whose 59.9% expansion compares with only 0.7% growth by non-LCCs that are outside the JVs.

Over the four years since 2014 (the first full year of Norwegian's participation in the North Atlantic market) the non-LCCs outside the JVs have grown by a healthy 34%, but LCCs have grown nine-fold.

LCCs account for 27.7% of non-JV seat capacity in 2018, from an almost standing start five years ago.

North Atlantic*: annual seat capacity outside the joint ventures, 2008 to 2018

LCC narrowbody growth on the North Atlantic is particularly strong

LCCs' North Atlantic growth is even more rapid on narrowbody aircraft. In 2018 LCCs will grow widebody seat numbers by 49%, a very significant rate, but their narrowbody capacity will leap by 89.4%.

After these widebodies, the next most important LCC aircraft in this market are narrowbodies: the Airbus A321 (20.9% of LCC seats) and the Boeing 737MAX-8 (8.6%) 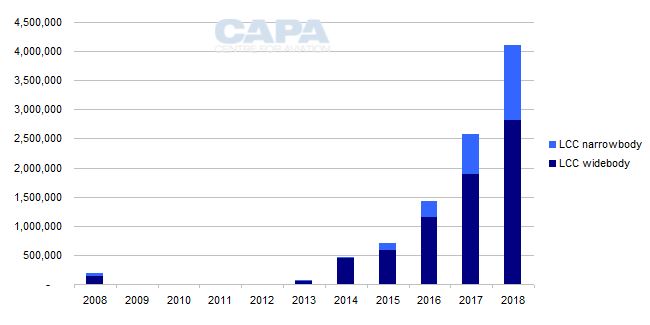 LCCs have 37% of North Atlantic narrowbody seats in 2018

LCCs are now a very significant factor in long haul narrowbody operations, taking 36.6% of all narrowbody seats on the North Atlantic in 2018, according to current OAG data. As recently as 2015, this was as low as 3.9%.

Non-LCC narrowbody capacity fell from 2011 to 2013, before enjoying a modest rebound to 2015 and then falling once more. There is projected to be a 12.4% drop in non-LCC narrowbody seat numbers between Europe and North America in 2018. 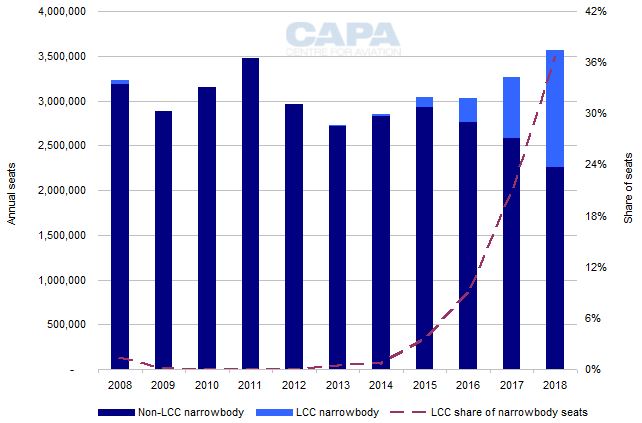 The sharp growth in LCC narrowbody capacity on the North Atlantic since 2014 was driven first by Airbus A321 aircraft and, from 2017, also by Boeing 737MAX-8 aircraft.

Between them, these two aircraft types are projected to account for 93% of LCC narrowbody seats in this market in 2018.

The better fuel efficiency of the MAX and the A321neo and, in particular, the additional range of the A321neoLR enable new city pairs that are not big enough to sustain widebody operations to become economically viable.

Norwegian also has 30 A21neoLRs on order for long haul use, and JetBlue is considering trans-Atlantic operations for at least some of the 60 that it has ordered. 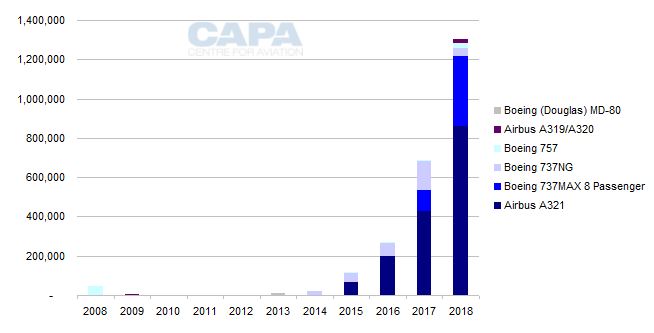 However, this may be starting to change, as LCC interest in newer narrowbody types for long haul operations has nudged some legacy airlines in the same direction.

SATA International (flying as Azores Airlines) is launching three A321neo trans-Atlantic services in summer 2018, from the Azores to Boston and Toronto. In addition, TAP Portugal has 10 A321neoLRs on order and Aer Lingus has eight A321eoLR aircraft on order, and both plan to deploy the variant on the Atlantic.

The Canadian leisure airline Air Transat also plans to re-enter the narrowbody trans-Atlantic segment with A321neoLR routes to Europe from 2019.

Air Canada and Icelandair are both operating 737MAX-8 equipment between Europe and North America in 2018.

Led by Norwegian, LCCs have become a noticeable feature of the North Atlantic aviation market over the past five years and their presence continues to grow.

The growth of LCCs in this market has been built on the development of new, more cost efficient, aircraft types (first the widebody 787 and now narrowbodies such as the A321neo and 737MAX).

It has been facilitated considerably by the market liberalisation allowed by the EU-US open skies agreement, allowing airlines such as Norwegian and Primera Air the freedom to operate outside their home markets, and from the UK in particular (something that may potentially be questioned after Brexit).

The Icelandic connecting model operated by WOW air has also made a significant contribution.

Legacy airlines have responded in various ways. These include following LCCs on some routes (for example, British Airways' launch of London Gatwick-Oakland in competition with Norwegian's earlier launch of that route); offering simplified fares with hand luggage only; and establishing new low cost long haul operations (such as IAG's Level and the long haul part of Lufthansa's Eurowings).

LCC growth in this long haul market has come at a cost. The largest participant, Norwegian, made a loss in 2017 and has struggled with sustaining its profitability since entering the North Atlantic in 2013.

Nevertheless, and in spite of the legacy response, LCCs' growth in seat share on the North Atlantic seems set to continue.