Thai Airways returned to profitability in 1Q2015 as the airline group benefitted from the recovery of Thailand’s tourism sector and the reduction in fuel prices. Labour costs were also down, an indication Thai has made progress in improving efficiency and productivity.

But it is too early to deem the restructuring Thai initiated in 2H2014, and is continuing to implement in 2015, a success. The first quarter is typically a strong quarter and Thai’s 1Q2015 profit was still well below 1Q2013 levels.

Passenger yields dropped in 1Q2015 from an already low base. Thai’s European operation is particularly struggling and may need another round of capacity cuts. Thai is already suspending services to two European destinations, Madrid and Moscow, and cutting capacity to Frankfurt and London.

Total revenues were up by 20% to THB61.303 billion (USD1.877 billion) but passenger revenues were up only 6% as Thai recorded a THB9.654 billion (USD296 million) gain on foreign currency exchange. This gain however was offset by impairment charges related to its restructuring, including the sale of excess aircraft. 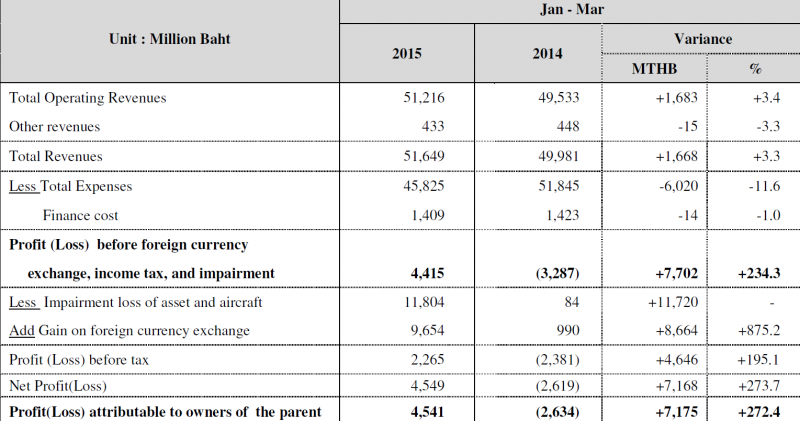 Costs were up 11% but excluding impairment and financing costs were down by 12%. Fuel cost were down 30% due to the sharp reduction in fuel prices as ASKs were still up slightly.

Labour costs were also down by 2% despite the increase in ASKs. Thai cut about 1,500 jobs in late 2014 as part of an initial component of its restructuring plan that was aimed at improving the flag carrier's productivity and efficiency.

Thai has almost always been profitable in the first quarter

The return to profitability after seven consecutive quarters in the red is noteworthy and was ahead of most expectations. But it does not mean Thai will be able to book a profit for the full year – even if oil prices remain low – as traditionally the first quarter has been strong for the Thailand airline sector.

While Thai incurred annual losses four out of the eight years only in 2014 was it not able to make money in the first quarter. Thai’s last profitable quarter was 1Q2013, when it generated a profit of THB8.283 billion (279 million), or nearly double the profit of 1Q2015. Thai had an even higher first quarter profit in 2009 and 2010. 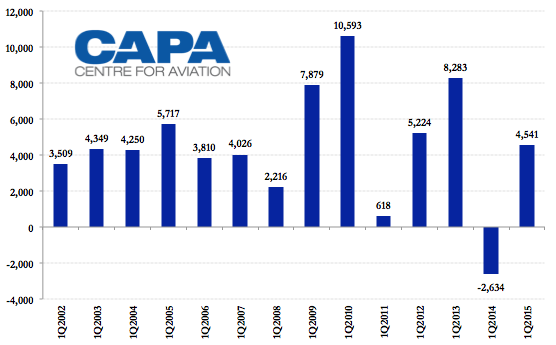 When including full-service regional subsidiary Thai Smile, the group’s passenger numbers were up 17% in 1Q2015 to 5.62 million. RPKs for Thai Airways and Thai Smile combined were up 12.3% while ASKs were up 4.5%, resulting in a 5.3ppts improvement in load factor to 75.4%. 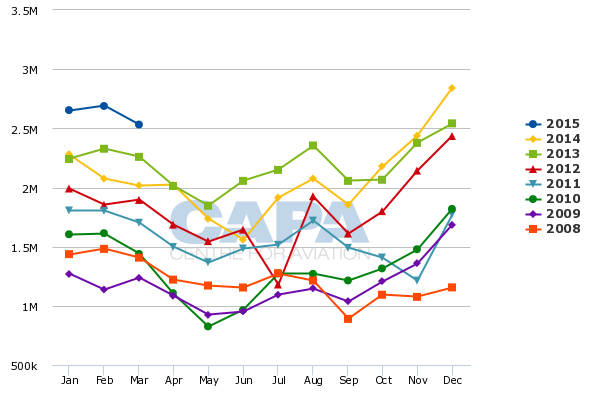 Source: CAPA – Centre for Aviation and Thailand Ministry of Tourism

Thai has its entire operation at Suvarnabhumi, with the exception of a few Thai Smile-operated domestic flights at Don Mueang, which is mainly served by LCCs including Thai Airways' short-haul LCC affiliate Nok Air, along with Thai AirAsia and Thai Lion Air.

Thai Airways, as well as other Thai carriers, have clearly benefitted from a recovery in Thailand’s inbound market. The improvement in profitability of Thailand’s LCC sector and Thailand’s other full-service carrier, Bangkok Airways, will be analysed in a forthcoming report.

Perhaps more concerning than its drop in market share, which is to be expected given the rapid growth in Thailand’s LCC sector, is the continued erosion of yields. Thai Airways has so far not been able to improve yields despite the recovery in demand. Thai and Thai Smile combined reported a 5.6% drop in passenger yields (including fuel surcharges) in 1Q2015. Even when excluding the impact of foreign currency, yields were down by 1.1%.

Lower fuel costs more than offset the yield decline, enabling Thai to return to profitability. But Thai cannot bank on low fuel prices forever. Its inability to drive up yields during a period of relatively favourable market conditions is alarming.

Thai continues to struggle in the European market

As CAPA highlighted in Mar-2015, Thai suspended services to Moscow at the end of Mar-2015 and is planning to suspend services to Madrid on 6-Sep-2015. Thai also cut its second frequency to Frankfurt on 1-May-2015 and is cutting its second daily frequency to London on 1-Jul-2015. (London is now served year-round with 14 weekly frequencies while Frankfurt has traditionally been served with 10 to 14 weekly flights depending on the time of year.)

Thai will provide slightly under 27,000 weekly one-way seats to Europe in late Sep-2015, representing a 12% reduction compared to late Sep-2014. This includes approximately 30% cuts in the Bangkok to Frankfurt and London markets. Thai competes against British Airways and EVA Air in the non-stop Bangkok-London market and against Lufthansa in the non-stop Bangkok-Frankfurt market. 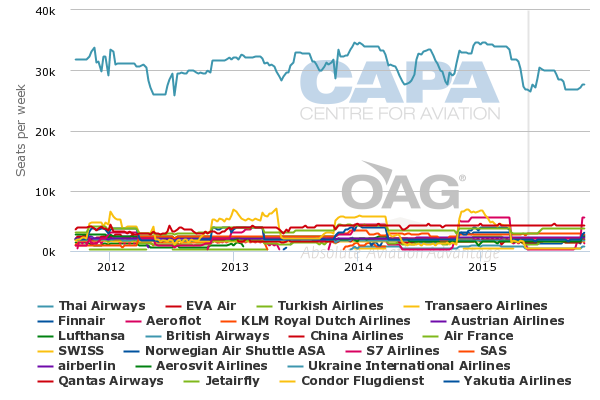 The cuts however may not be deep enough to turn around Thai’s performance in the European market. As CAPA wrote on 26-Mar-2015, competition has intensified in the Thailand-Europe market as the Gulf carriers have expanded rapidly in Thailand and as long-haul LCC Norwegian has launched services to Bangkok from three Scandinavian points, all of which are also served by Thai.

The reduction in London is relatively modest as Thai is up-gauging its remaining London flight to the A380. Thai currently operates Bangkok-London with 747-400s and previously operated the route with A340-600s, which Thai phased out in Mar-2015 as part of its fleet restructuring and simplification exercise. While Thai has been operating A380s since late 2012 the aircraft has so far only been used on Frankfurt and Paris as well as some regional routes. Thai initially decided against using the A380 to London as it preferred to maintain two frequencies with smaller aircraft.

See related report: Malaysia Airlines and Thai Airways focus on Europe rather than Australia with A380s

By transitioning its London operation to one A380 frequency Thai reduces its unit cost on the route and is able to sell a Heathrow slot as part of an ongoing effort to raise capital by divesting excess assets. But maintaining only one London flight will reduce Thai’s share of a key market and its ability to offer connections. Malaysia Airlines is retaining two daily A380 flights – at least for now – despite its network restructuring exercise, while Singapore Airlines operates four daily flights to London.

Thai also has been struggling on its only North American route, Bangkok-Seoul-Los Angeles. Thai recorded a 4.2ppts drop in load factor for 1Q2015 in the North Pacific market, which includes just the one route to Los Angeles, to only 64.5.%. This follows a 2.7ppts drop in 1Q2014. Thai already cut Johannesburg, which had been the carrier’s only other destination outside Asia-Pacific and Europe, in Jan-2015.

Thai benefits from the recovery in regional markets

With the exception of Europe and North Pacific, Thai recorded load factor improvements in all geographic segments in 1Q2015. Thai saw the biggest improvement on international services within Asia, which achieved a 12.1ppt surge in load factor to 76.9%. This was the segment of the market that had been impacted the most by the political instability in 2014 as residents of other Asian countries decided to avoid holidaying in Thailand.

Thai’s regional load factor is now almost at 2013 levels boosted by a recovery and growth in visitor arrival numbers from Asian source markets. Thai’s regional ASKs are also now above 2013 levels as all the regional capacity cuts that were in place for most of 2014 have been reversed.

Visitor numbers from China, which is Thailand’s largest source market, roughly doubled in 1Q2015 and were also up 81% compared to 1Q2013 levels. Surging demand in the Thailand-China market will be analysed in more detail in the forthcoming report on Thailand’s LCC sector.

Thai mainline also recorded 5.3ppts improvement in its domestic load factor in 1Q2015 to 79.2% and a 2.8ppts improvement on its load factor on routes to Australia and New Zealand to 72.3%. Domestic load factors are back at 2013 levels while load factors to Australia and New Zealand are still lagging. Thai may need to cut capacity to the Southwest Pacific region as competition in the Southeast Asia-Australia/New Zealand market remains intense. But additional capacity cuts are likely to focus mainly on Europe as Thai will likely be keen to maintain its regional position in Asia-Pacific.

Thai starts to make headway in reducing and simplifying fleet

The reduction and simplification of the widebody fleet is a key component of the recovery plan which along with the network restructuring has not yet been completely implemented. At the beginning of 2015 Thai was aiming for reduced losses in 2015 and a return to profitability in 2016.

The return to profitability now seems ahead of schedule following the better than expected first quarter results. But Thai still needs to get through the weaker summer months. Thai’s long-haul operation will also need to show improvement if the group is to be profitable on a sustainable basis.