Spirit goes to new lengths to press its case for Venezuela

Spirit Airlines’ quest to attain long-coveted service to Venezuela took an interesting turn when the carrier seized on an opportunity to criticise the Venezuelan Government for foot-dragging on its authorisation to serve the country through a routine renewal of US-Venezuela authority for small cargo charter carrier Sundance Air Venezuela. Spirit appears to be seizing on any opportunity to highlight the Venezuelan Government’s slow approval process for its flights to the country.

Spirit has been waiting roughly five years for the Government of Venezuela to authorise flights from Fort Lauderdale to Miami after the US Government approved the service in late 2006. The carrier has repeatedly stated its frustration over US-Venezuela Government relations stalling its ability to introduce service to Venezuela. In an interview with CAPA last year, Spirit CEO Ben Baldanza singled out Venezuela and Cuba as the two remaining holes in its Latin American/Caribbean network. 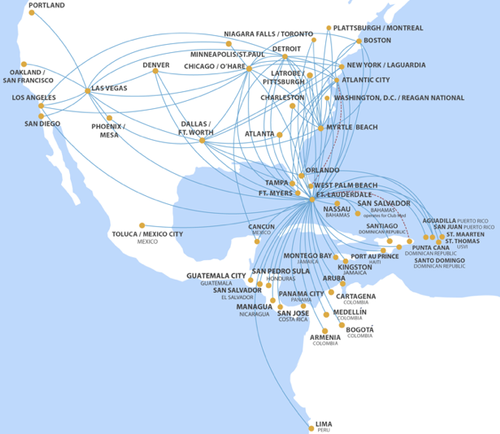 Earlier this month when Sundance Air Venezuela sought to renew authority it received in Mar-2007 to operate charter flights of mail and cargo between Venezuela and the US, Spirit highlighted it years-long effort to secure approval for flights to the country. (Sundance, which operates two short-range Let L-410 turboprops, has never used its US rights but requested the renewal.)

Spirit stressed the Venezuelan Government should first allow it to introduce service to the country before Sundance receives renewal of its authorisation to serve the US, charging that the country’s civil aviation authority INAC was violating the US-Venezuela Air Transport Agreement by continuing to lapse in granting its request. Sundance shot back at Spirit, stating true to its character, “Spirit has made a ‘no-frills’ argument when the applicable standards require something more substantial”.

The cargo airline concludes that the Venezuelan Government has demonstrated adequate reciprocity in granting air service approval, noting nine US carriers are authorised to serve Venezuela – American Airlines, Delta Air Lines, United Airlines, FedEx, UPS, Amerijet, Polar Air Cargo, DHL and Florida West. That contrasts with only four Venezuelan carriers – Santa Barbara, Avior, Venescar and Sundance – with permits to operate to the US. Venescar is a cargo carrier based in Caracas while Santa Barbara and Avior are passenger carriers.

Sundance further argues that American, through its four daily flights from Miami to Caracas, is more than the daily combined operations of all the Venezuelan carriers offering flights to the US. American does dominate the Caracas-Miami market and currently has a 55% share of the 9661 weekly seats flown in the market, according to Innovata data, compared with a 41% share for Santa Barbara.

LAN is the only other carrier in the Miami-Caracas market. Avior serves Miami from the Venezuean city of Barcelona with Boeing 737-200 equipment. 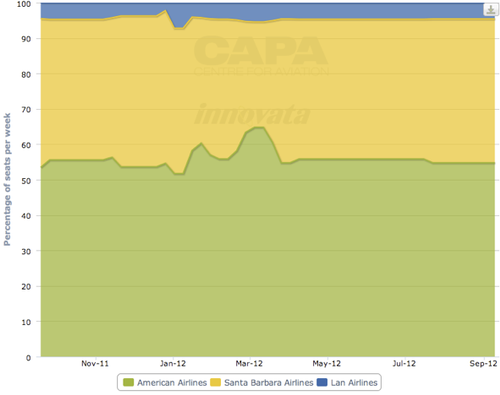 Sundance admits while no one would claim the US-Venezuela aviation relationship is without complications, it argues the US Department of Transportation (DoT) has taken steps to address the situation by withholding approval of new service sought by Venezuelan carriers seeking to expand to the US. Although Sundance deems those actions regrettable, the carrier argues they are more appropriate than refusing to grant an authority that has been in place for five years. Sundance argues the approach Spirit is taking in urging the rejection of its renewal for authority to serve the US “clearly lacks proportionality”.

Spirit, meanwhile, could be stepping up its rhetoric against the Venezuelan Government as Brazilian carrier Gol seeks approval to launch Sao Paulo-Caracas-Miami service in June. Gol will benefit from entering the lucrative and underserved Miami-Caracas market. The cheapest ticket on American for non-stop roundtrip travel for a 11-Jun-2012 departure and a 14-Jun-2012 return is USD1033.

No low-cost carrier currently serves the Miami-Caracas market, something that has not been lost on Spirit for many years as it seeks to flesh out its no-frills model in Latin America and the Caribbean from its Fort Lauderdale base that resides 43km away from Miami. Gol also appears to have a deep understanding of the market dynamics, and now appears ready to capitalise on pent-up demand and become the first-mover LCC in the Venezuela-South Florida market as Spirit’s authorisation to serve Caracas remains shrouded in uncertainty.