Small LCC market share in Latvia is in decline – a portent for the future or a localised anomaly?

LCCs entered the Latvian international aviation market in 2004, via the almost ubiquitous presence of Ryanair, when the country joined the European Union. Their target market was economic migrants seeking new opportunities in the west (as it was in the case of neighbouring Estonia and Lithuania, the Slavic countries and Hungary and Romania also in 2004 or in 2007), followed by business visitors to Latvia - a former Soviet-bloc state - also seeking new opportunities, and tourists seeking new weekend break destinations.

In short, it was the perfect LCC operating environment in an era of economic boom and political glasnost and perestroika. But the economy has since gone seriously wrong in Latvia. Not only have no other significant LCCs made their presence felt, none have arisen locally and LCC market share, having peaked at 27.5% in 2007 has slipped back to 20%. It is the legacy carriers that lead the fight back here as Riga Airport trumpets 10% growth in 1H09.

Ryanair commenced air service to Riga in the autumn of 2004, when it had just 160 routes across 17 European countries. The routes were from and to London Stansted, Frankfurt Hahn and Tampere in Finland, a country that has close social and economic ties with the three Baltic States.

No discernible reason other than keeping aircraft in the skies?

As is often the case with Ryanair’s routes there are those that appear to have regional significance (e.g. Stockholm and Tampere), those that have

sound economic reasoning (e.g. Brussels for EU-related traffic), and those that are provided fundamentally for the benefit of economic migrants that have settled in other countries; all of them to be supplemented by tourists wherever possible. Then there are those where there is no discernible reason other than that of keeping aircraft in the air. Bristol and Bergamo might fit that criterion.

Latvia is one of only two Baltic countries served by Ryanair. It does not fly into Estonia or to Lithuania’s capital Vilnius, but does operate seven routes from Kaunas, Lithuania’s second city. As Kaunas is only 100 km from Vilnius, it serves as a gateway to the capital in the Ryanair philosophy but does not actually market it as ‘Vilnius-Kaunas.’

There are two other airports certified for international traffic in Latvia: at Liepaja, which has a 2 km (6,500 ft) runway and at Ventspils where the runway amounts only to 1.3 km. Neither has attracted significant commercial traffic and both are sufficiently distant from Riga that they could not be considered as alternatives even by Ryanair. Ventspils is 125 miles away and Liepaja has a domestic air service to Riga. Moreover, Riga is far and away the economic capital, not only of Latvia, but also as the de facto capital of the three Baltic States. Riga International Airport is the largest international aviation company in the Baltic.

Of the 13 airlines that operate at Riga, only two, Ryanair and Norwegian, are classed as LCCs. It is certainly no Baltic version of London Stansted. EasyJet currently offers Riga in its online destination menu but does not actually offer a destination from there. (It does have a single flight from Tallinn in Estonia, to London Stansted). Air Berlin does not fly to any of the Baltic States, which appear like a huge gaping hole in its route map. Other airlines at Riga are Bulgaria Air, WindJet, a Sicily-based scheduled and charter carrier, SmartLynx, a Riga-based charter airline, and a coterie of legacy airlines that includes CSA, KLM, Finnair, LOT, Lufthansa, THY and Uzbekistan Airways, which offers a service to New York under fifth freedom rules as well as the more obvious Tashkent. 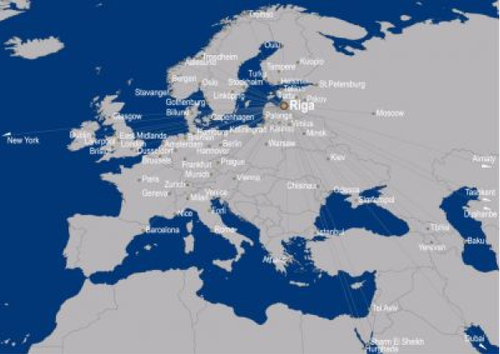 Riga and its airport do not have the appearance of a city that is pandering to the whims of LCCs even if it did covet them in 2004 as a means of economic development in the new EU era; development which was sudden and rapid. Then it all went pear-shaped.

Borrowed with abandon and more indebted than the UK

Between 2005 and 2007, Latvia’s economy expanded faster than anywhere in Europe, recording double digit growth three years in a row. Freed from the strictures laid down to achieve accession into the EU the private sector borrowed with abandon. As the economy boomed, the Latvian government increased the number of civil servants dramatically and paid many of them more than their counterparts in the private sector.

Latvia's descent into financial chaos is the result of a malign brew of fiscal imprudence, irresponsible lending and a failure to recognise the signs of an overheating economy. When the global financial crisis struck, drying up credit lines, Latvians’ borrowings amounted to 137% of GDP, more than anywhere else in Europe, even the UK. Riga's skyline now bears testament to a boom turned to bust. Cranes towering over the city’s elegant art nouveau façades lie idle. Newly built luxury apartment blocks lie empty, even though property prices have fallen 50%.

Interestingly, fascinatingly even, this has not had an adverse effect on the fortunes of Riga Airport. In the first six months of 2009 the number of passengers grew by approximately 10% year on year (table 1 below) to 1,820,000; as the airport states, “the fastest growth in passenger traffic in Europe - an extraordinary achievement in the generally declining airport industry.”

In comparison, Estonia’s Tallinn Airport in the same period handled 658,965 passengers - 26.8% less than last year while Lithuania’s Vilnius Airport handled 599, 342 passengers or 39.5% less than in the first six months of 2008. Put another way, Riga handled 60% of passengers in the three main Baltic airports, Vilnius 19% and Tallinn 21%. See Chart 1 below.

“One of the most demanded exports of Latvia”

The most popular destination in the first six months of 2009 was London, served directly by both Air Baltic and Ryanair, and second place went to Stockholm, also served by those two airlines. 227% growth was achieved by the third most preferred destination – Vilnius (Air Baltic). In 2008 Vilnius was only in 17th ranking position, adding weight to the claim that it is Riga’s mini-hub attractions that are doing the business. Fourth and fifth places are held by Helsinki, the capital of Finland (from where Finnair offers a comprehensive Asian network and transatlantic flights), and Oslo, the capital of Norway (Air Baltic and Norwegian). Passenger flow has also substantially increased to and from Tallinn– up by 147%. In the first half of 2008 Tallinn was in 21st position whereas in 1H09 it is the ninth most popular destination at Riga International Airport.

Notably, one of 2008's most visited destinations, Ryanair’s home base of Dublin, has slipped from its second position to sixth in 2009 with a net loss of 31% of passengers. This is indicative of how emigration from new entrant EU states to Ireland, where the economy has bombed as badly as anywhere, has dried up, along with the ‘VFR’ journeys those émigrés used to take back home. There were upwards of 300,000 East European residents working or seeking work in Ireland as recently as 2007, out of a total population of less than four million.

The changes in the popularity of destinations demonstrate that passenger flows have increased in the direction of the Nordic, Scandinavian and Baltic countries and they are growing in the direction of Russia, the CIS and Southern Europe. While these places are not well served by LCCs, Riga International Airport is often chosen as a convenient point for connecting flights. 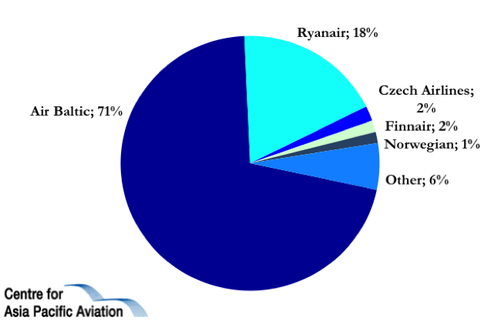 airBaltic is one of the most difficult airlines to pin down as a ‘type’. It advertises and promotes itself as an LCC and has fleet commonality but it codeshares and interlines. It is a true hybrid, more ‘Easyjet Plus’ than ‘Lufthansa Lite’.

Established in 1995, airBaltic was 47.2% owned by SAS until the turn of the year, when that equity was bought back by the airline following the failure of a privatisation offer and after SAS found itself struggling with tough competition and harsh market conditions. The disposal came at the same time as it divested stakes in Spanair, Spirit, Air Greenland and bmi. The primary shareholders of airBaltic now are the Latvian state, with 52.6% of stock, and SIA Baltijas aviācijas sistēmas, with 47.2% of stock. The airBaltic fleet consists of 31 aircraft – ten Boeing 737-500, eight Boeing 737-300, two Boeing 757-200, and eleven Fokker 50 airplanes. airBaltic offers nonstop flights from two Baltic capital cities – Riga and Vilnius.

Tried to mount a reverse takeover of SAS

The state that SAS has got in to is exemplified by a tongue in cheek proposal from the Latvian Government at the end of 2008 that it could mount a reverse takeover of SAS. airBaltic had been making small profits before the downturn, e.g. USD1.6 million in 1H08 as passenger numbers rose by 30% in the period. Before the recession Baltic carriers generally were performing well but from late 2008 onwards the highly leveraged region took a bigger hit than much of the rest of the EU. Lithuania’s FlyLal (Lithuania Airlines) for example ceased all scheduled operations in Jan-09.

airBaltic is not out of the woods yet. The Latvian government is still providing financial assistance to the carrier of around USD55 million and reportedly plans to rescue the carrier from bankruptcy by increasing its shareholding. As of now airBaltic is said to be “doing much better this year than we expected," according to CEO Berthold Flick, having benefited from capacity cuts and route reductions by other carriers such as CSA and LOT. He also claimed the airline’s yield had increased this year in contrast to the industry trend of falling yields but did not provide numbers.

But it is the sheer scale of its presence that is key to Riga Airport, in the same way as SkyEurope’s has been to several airports in central Europe. airBaltic currently serves 61 cities from Riga. More to the point, nine of the top ten city pairs operated by airBaltic link Riga with cities in neighbouring regions with common economic demands. See Chart 5, below. 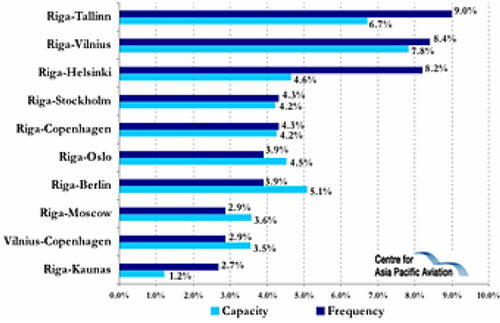 It transported 2.6 million passengers in 2008. By comparison the total passenger throughput at Riga Airport was 3.6 million.

So for all the benefits LCCs can bring here is one example of a region where an economic fight back can get under way that is led more by the legacy airlines. This month airBaltic announced that it had been awarded a three-year tender by the Finnish Government to provide passenger transportation on eight routes from 01-Sep-09. Under the contract, representatives of the government will travel on routes between Helsinki and Tallinn, Moscow, St Petersburg, Riga, Stavanger and Vilnius, as well as routes between Tampere and Zurich, and Turku and Paris. Most of this traffic will pass through Riga.

In an era when centralised procurement is making a comeback against the ‘find your own cheapest budget airline’ philosophy that has prevailed in business for a decade or more (it was also announced this month that Finnair had won a contract to transport British civil servants from all departments from London and Manchester to Osaka, Japan – the first such centrally negotiated deal in the British public sector) this is demonstrative of how legacy airlines and airports can contribute to economic recovery on route development the likes of which LCCs would not or could not operate.

So what of the future? Charts 6 and 7 below compare LCC market share in Europe generally with that to and from Latvia (there are no domestic LCCs there or operating within the three States). 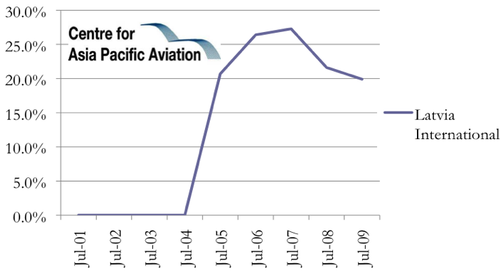 Source: Centre for Asia Pacific Aviation & OAG FACTS
NB: THERE ARE NO LCCS OPERATING WITHIN LATVIA 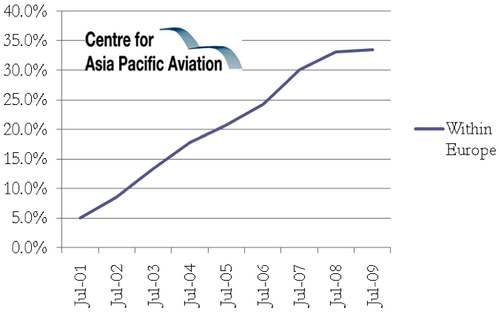 The levelling off since Jul-07 in the Europe example contrasts with a sharp downward turn in the same period in the Latvian example. If the evidence here is to be believed we will likely see more of the same in the future.

This report was compiled by CAPA’s European correspondent, David Bentley.